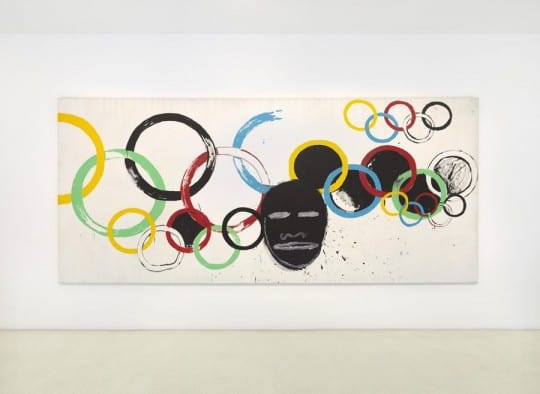 Courtesy of Ones to Part.

“The Olympic rings that dominate the canvas are seemingly left unfinished; they are rendered in the traditional primary colours of the Olympic logo, but are left with unpainted spaces within them. These rings are thus imperfect in their replication of the traditionally ready-made Olympic logo; it is obvious that they have been hand-painted from their asymmetry and relatively rough brushstrokes, as well as having been slightly repositioned in order to add a dimension of disarray to the instantly recognisable symbol. The way in which the rings are repeated within the canvas itself is a somewhat interesting comment on the mass reproduction of an icon, the Olympic logo – a comment that is, of course, quintessentially Warholian.

Then, imposing itself between these rough clusters of Olympic rings is a dark, bold head that resembles a traditional African mask. In Basquiat’s distinctive graffiti style, the face is a striking intervention in the otherwise relatively harmonious composition. It seems to stare at you as you walk around the gallery space, adding a distinctly figurative dimension to the abstract, symbolic logo in the background – the human aspect of the Olympic games, athlete and artist alike. It is thought to be an allusion to great African-American Olympic athletes in history, such as Jesse Owens, Carl Lewis and John Carlos, but it could also be seen as self-referential. The two elements of the painting – the rings and the mask – are in constant dialogue with each other, interacting through the violent nature of their execution, as though they stand apart from, and yet also augment each other.” – Ashitha Nagesh. 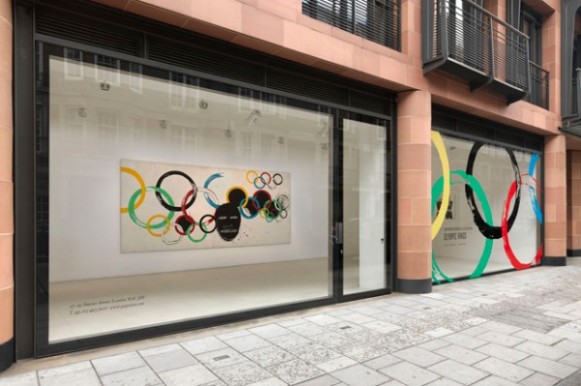 Photo Courtesy of Ones to Part.