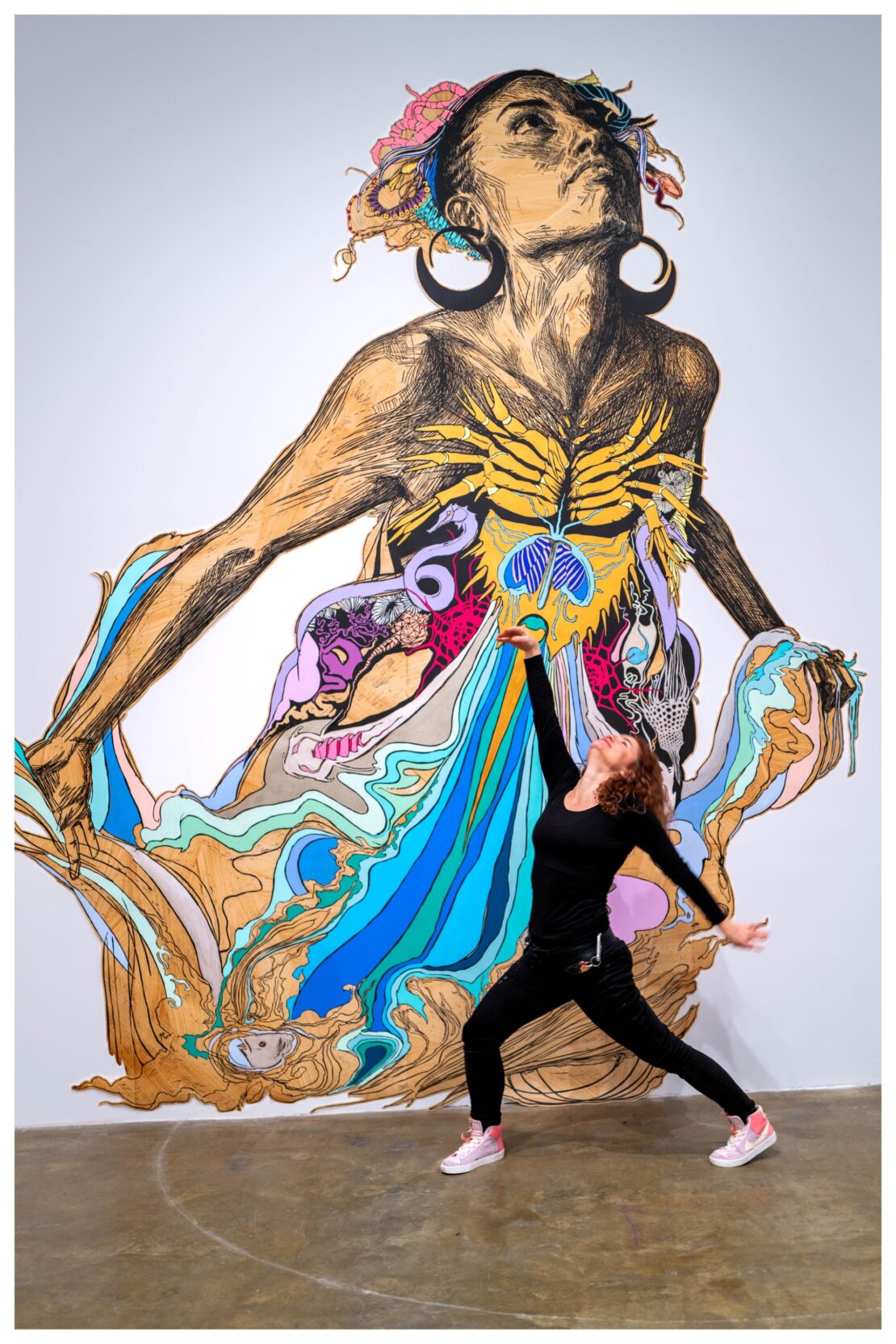 It is often said that great things take time and after a twelve year hiatus from publishing, renowned artist Swoon has returned with the must-have monograph, THE RED SKEIN. Swoon, born Caledonia Curry, first made her mark in the early 2000s as one of the first female street artists to gain recognition in a mostly male dominated field. Since then, the Brooklyn based Swoon has become one the most recognizable creatives to come out of the genre. Her worthwhile wheatpastings have become somewhat of a New York City staple, depicting our quotidian shuffle with brilliant detail and spirited realism.

“I believe that the creative force is a force akin to magic, and that when we take it and apply it to our world, strange and beautiful things happen.“

With THE RED SKEIN, Swoon has successfully gathered more than 10 years of work–200 colored images curated underneath one healing umbrella. Having worked with bestselling author Dr. Gabor Maté, who has written extensively on the link between trauma and addiction, Swoon uses THE RED SKEIN to unpack her own journey through in a very intimate display that is kicked off with a wonderful introduction by Maté himself. It also includes essays by New York Based Curator RJ Rushmore (one of the youngest and most respected critics of street and graffiti art in the world), Melena Ryzik (New York Times reporter who was part of a team that won a Pulitzer Prize in 2018 for reporting on workplace sexual harassment), Jerry Saltz (American art critic, senior art critic for The Village Voice and columnist for New York magazine) and Pedro Alonzo (Boston-based independent curator and Adjunct Curator at Dallas Contemporary). Other contributors include Hans Ulrich Obrist (director of Serpentine Gallery, Art curator, critic and historian of art), Jeffrey Deitch (art dealer and curator, director of the Moca 2010-2013) and Judy Chicago (feminist artist, art educator and writer).

The various efforts that went into THE RED SKEIN is a testament to how revered Swoon is as an artist and how much her work means to the existential paradigm as a whole. Swoon taps into a vulnerable place of strength and invites her readers to witness and experience a transformation through the endurance of love.

QUIET LUNCH caught up with Swoon and she was nice enough to have a quick chat about THE RED SKEIN, its meaning, its process and its overall intent. Copies are available at local bookshops near you or you can simply CLICK HERE and order one today!

This is your first book in 12 years. How does it feel to revisit the publishing aspect of your career? What does this book mean to Swoon?

It was a huge undertaking! Creating a decade long monograph is a really good occasion to examine your life and try to put it into some perspective. It’s also strangely a heavy process. To really look through and sift all those memories, all those projects, all the people that have been in your life in various ways – even just the awareness of the passage of time. It’s a lot. But I’m so grateful for it, and really thrilled to have this book. It’s a testament to a lifetime of making.

Let’s talk about the title, The Red Skein. Can you tell us about the meaning behind the title and how it came to be?

The Red Skein is a reference to Ariadne’s thread, and also how often a red ball of yarn plays into fairy tales. In the myth of the Minotaur, Theseus goes into the labyrinth to conquer the Minotaur, but, even if he is successful the chances that he will make it out alive without getting lost are slim. Until Ariadne falls in love with him and gives him a ball of string with which he can find his way out. It is the thread of love. The strand which gives meaning to all the twists and turns.

When we first started to make this book, Paulo from Drago talked about how my work was like a labyrinth, how there is so much there, and they hoped to make a document that could lead people on that journey – so I thought of Ariadne and her simple yet powerful gesture of love.

You complied various elements of your work underneath one brilliant umbrella. What was the process like?

Dozens of hours of sifting through images. At first I wrote hundreds, which I’m not sure is true, but that’s definitely what it felt like!  A lot of asking people to contribute photos and essays and quotes. And a lot of back and forth with the book designer Nicola, who had fabulous patience with me. The main outlines were already there, the big projects and bodies of work –  it was clear to me from the start that I wanted to make something which did its best to give an overview of these main works I’ve created over the years. The difficult part was really in the pairing down. When you get in to it, you feel like each project could have its own book. How to take a project which spans a decade and put it into 5 or 6 pages? It’s a real process of restraint and editing.

So many wonderful individuals came together to make this wonderful book a reality. Can you tell us about some of the key efforts that went into its production?

First there are the people who took the pictures. Lots were me, but many of them are by photographers I’ve worked with for years, and without whom I don’t know what I would even have to show the world. Like Tod Seelie – he is one of those people who knows how to capture my work in a way that also captures its essence, the way it feels to be there. It’s such a rare skill and I’m so grateful for his contribution. And street photographers like Luna Park and Jake Dobkin who took pictures of things that disappeared shortly after and I never would have had images of otherwise. They really captured a fleeting time and place, and each in their own way. Then there are the essays. Pedro Alonzo’s essay made me cry because I felt so seen and understood.

All of the essays are something I feel so lucky to have – from Jeffrey Deitch, to Melena Ryzik and RJ Rushmore – they were a major labor of love for the people who contributed them. And there are lots of quotes by people who I’m just so honored to have their mind on my work, like Hans Ulrich Obrist, Judy Chicago, and Gabor Mate. These are folks who have all changed and shaped my life in some way, and to have them contribute to this book is a real gift.

What would you like your audience to take away from the book? Tell us about the intent of The Red Skein…

I believe that the creative force is a force akin to magic, and that when we take it and apply it to our world, strange and beautiful things happen. Lives change, problems are seen anew, sheltering beauty is created, so many things which didn’t seem possible before become possible, even likely. I want people to see and feel the way that this philosophy lives inside my art.

Are there any interesting or fun facts about The Red Skein that you would like us to know?

I was terrified to write my essay! Maybe that’s not a fun fact, but it’s true. I bore my soul there, and the process was absolutely nerve wracking. I’m so happy that Drago was unafraid to publish such a piece of writing. This book is so many layers of art and life, so many layers of me. I hope everyone who sees it feels a little bit of that life inside it.