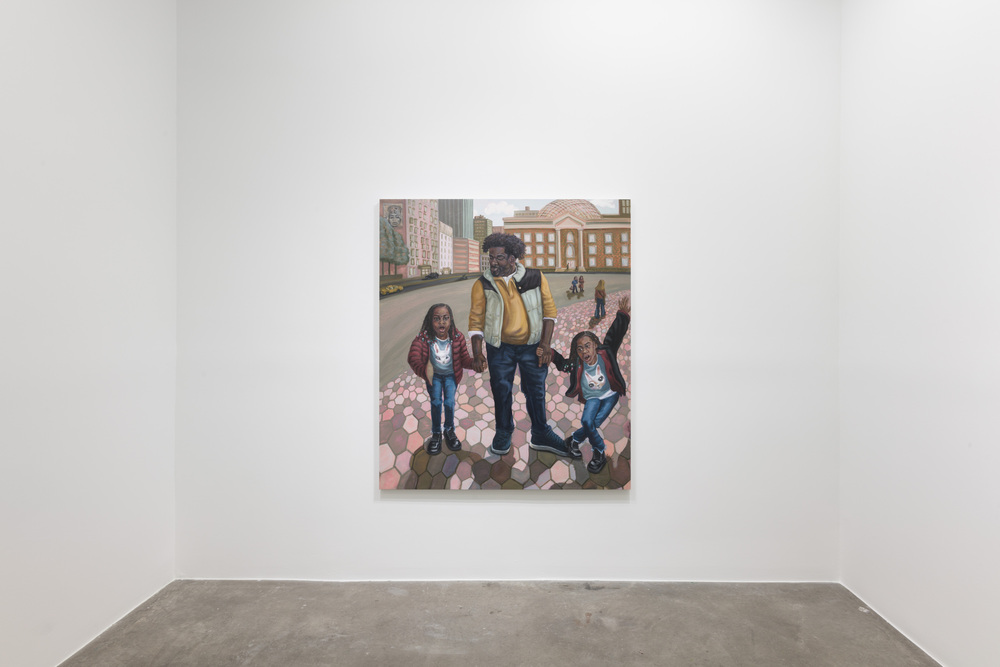 There is something familiar about Patty Horing‘s latest solo exhibition, A Few Good Men. Hosted by Anna Zorina Gallery, the exhibition greets you with a certain warmth. As some portraiture can have an eerie and almost off-putting Mona Lisa effect, where the eyes follow you suspiciously around the room, judging every move and clocking every glance. Horing’s subjects seem to welcome you with open arms and a knowing smile in their eyes. Their body language translates as an invitation rather than posturing. A Few Good Men makes you feel at home and encourages you to stay awhile. Horing draws the viewer in and keeps them there with a captivating panache for nuances and Easter eggs. A blurred reflection of a Mohawk in a lamp, a version of her younger self, even a cameo from Beyoncé–it is all there for you to find, if you are willing to rummage through the charming details.

This exhibition, in all its communal splendor, is evidence of synergy. For those who aren’t familiar, Horing has been with Anna Zorina for some time now. In that time spent, the two entities have found themselves in a worthwhile rhythm that elevates Horing’s work in ways that allow it to flourish and grow. Such chemistry is undeniable and also refreshing. So often we hear of a gallery herding and sometimes stifling an artist. A Few Good Men proves that harmony can exist.

“I like to do bodies of work that, when taken together as a group, can have a larger meaning than the narratives in each individual work.  This show grew naturally out of my thinking about how, at least in New York City, men’s roles in society seem more open and fluid than at any other time in my life experience, and I can’t help but feel that this is healthy for them, and for women.”

With the last days of A Few Good Men upon us, we took some time to catch up with Horing and have a quick chat about the exhibition and its intention. She was kind enough to sit down with us and shed some light while also reflecting on the soon-to-be concluded show.

This may sound a little obvious, but the first thing that stood out to us was the title, A Few Good Men. Sounds familiar. How did you come to choose it for the exhibition?

“The title is intended as both literal and a bit of a joke. It’s cribbed from the popular military-themed play and film from the 90s, but the ‘good men’ I painted are embodying a very different kind of masculinity.   The show grew out of my realization that I knew a lot of young men who were primary caregivers for their children, and that I could think of no images in art history of men actively engaged with their kids.  Mostly there are patriarchal power portraits in which the family is effectively a status prop. Here I wanted to see and show dads the way we have seen mothers in art for centuries.

From there the idea led me to think about the ways traditional images of what is masculine have boxed people in, and I started doing portraits of other (non-dad) men who are comfortable in their own skin, embodying a sort of humanism and even humorous, or at least self-deprecating masculinity, that isn’t about ‘power over’.”

Your work seems to be centered around and aimed towards the local gentry. Can you tell us the significance of this aspect in your work? And what is your subject selection, what is the process when choosing your muses?

“Many of my subjects are artists, some are family, most are friends, including children of friends.  But all are people whom I encountered in my daily life in and around New York City, and who struck me as interesting and appropriate subjects for this project, pretty much just through gut instinct.  One family was so charming, I stopped them on the street and asked if they would pose for me, which they enthusiastically and generously did (‘A Dad with Singing Daughters’). In another example, in  ‘Family Tree’, a painting of twin 11-year-olds, the kids were just on the cusp of becoming men, and what kind of men is not yet clear, even to them.  That in-betweenness interested me.”

In regards to your aesthetic, your pieces are cloaked in hyperrealism but have slightly abstract tendencies. How would you describe your aesthetic?

“I think of my style mainly as expressionistic – living somewhere between realist and cartoonish. I do want my subjects to be recognizable as themselves, as specific individuals, but I’m more interested in the feelings and emotions the subject and larger narrative bring forth than in any kind of photographic likeness, so I like to distort features or elements for psychological emphasis.  By the time I complete them, most of my works are about 50% based on some aspects of reality and 50% out of my imagination.”

Can you tell us about some of the nuances and Easter eggs that can be found in the pieces?

Sure— I throw these things into almost every painting, mostly to amuse myself, and to add layers of meaning that others can pick up on or not.  Some examples— in ‘Inside Cat’, the cat is nose-deep in a jar of cat nip; the cat has three tails (which many people never never notice!),  a surreal wink at his high-ness— or the dude’s.  ‘Horseplay’ has a bunch of little things—the lamp on the desk behind the family reflects the back back of the dad’s head and the baby’s sock, and the painting’s title alludes to the figures’ activity, but also to the plush horse toy at right.  In ‘A Dad and Singing Daughters’, there’s a poster on the wall of the building in the distance that is a (loose) image of Beyonce, a role model for the girls.”

You have a noticeable chemistry with Anna Zorina. How has it been working with a gallery that gets your creative intention?

“Painting was my second act – actually, my third if I’m counting motherhood –  and Anna found me right out of art school in 2015, and really launched me into having a career, for which I’ll be forever grateful! This is my 3rd solo show with the gallery, and it’s been wonderful to have so much freedom to pursue different bodies of work with this platform. Anna is very open minded and game to let artists pursue their interests, including curating (I co-curated a show with artist Deborah Brown at the gallery in 2020 called ‘Sit Still: Self-Portraits in the Age of Distraction).”

“I like to do bodies of work that, when taken together as a group, can have a larger meaning than the narratives in each individual work.  This show grew naturally out of my thinking about how, at least in New York City, men’s roles in society seem more open and fluid than at any other time in my life experience, and I can’t help but feel that this is healthy for them, and for women. The artist Michael Stamm wrote an essay for this exhibition that I think wonderfully summed up the show’s intention:  he writes that the works ‘mine the traditions of figurative painting to visualize a world in which men existing autonomously no longer means having the most power… Certainly, it is powerful to be depicted as exactly who you consent to be. And if someone with less power can responsibly instrumentalize your archetype, maybe you have a moral responsibility to let them. Horing does exactly this, carefully posing the male subject to remind us that, yes, within every man, as in every person, is someone who is capable of being peaceful, domestic, caring, self- reflective, personable. And that to be this way is an act of dignity rather than of concession.’”