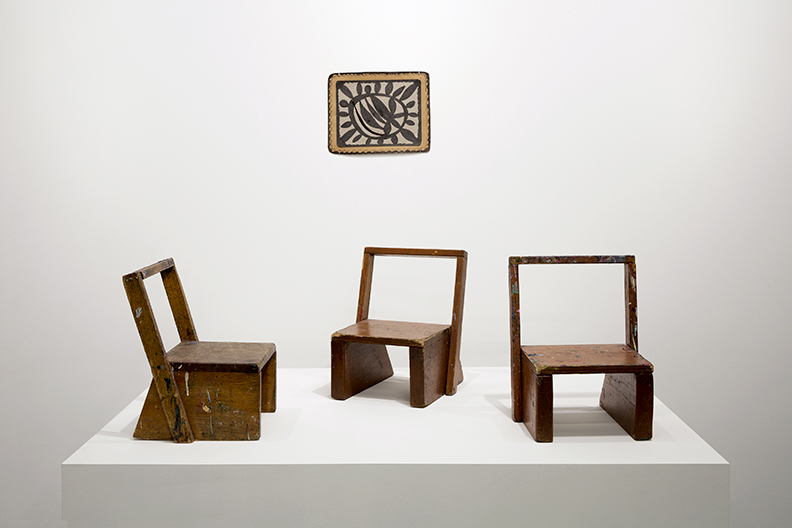 Rediscovery of the lives and works of two artists, Rhoda Kellogg and David Byrd, are on view at the venerable White Columns, running from 18 January to 9 March 2019. One enters the space at 91 Horatio Street, a block north of the Whitney Museum, to find children’s chairs and a wall of signs, further in on the left is a selection of works by Kellogg herself; a woman who pioneered the study of child art. To the right as one arrives at the White Columns galleries in the larger space are a selection of fascinating oil paintings by the painter David Byrd (1926-2013), inventively installed by curator Matthew Higgs.

Rhoda Kellogg (1898-1987) was an intuitive and ground breaking child-educator and psychologist whose base of operation was the Golden Gate Kindergarten Association in San Francisco for just short of 30 years. Conducting classes, lecturing and writing, Kellogg became involved professionally when she found that there was no sensible place for her own daughter to develop in the kindergarten school system. From the classes that she conducted and in sharing data and information with people from all over the world and in a diverse number of cultures, Kellogg eventually gathered into an archive over two million drawings by children between the ages of 2 and 8 years old… Author of three books, the best known and a marvelous illustrated text is “Analyzing Children’s Art” on how children develop through art making. She established and cultivated general awareness of the critical importance the scribbling phases are for children’s developmental awareness.

Kellogg’s own works are on display, colored paper cut-outs, mixed media collage and drawings. Three examples of Kellogg’s custom designed chairs for young children are there with a flyer; a hands-on guide on how to make them. Especially poignant are a wall of small informational signs, hand drawn by Kellogg for use at the numerous shows and sessions she organized where children were invited to gather to make drawings and finger paintings; child art.

Artist Brian Belott curated this exhibition, he has championed Kellogg’s accomplishments and discovered her own works, shown here for the first time, among the archive materials. Belott arranged an exhibit of child art from the archive mixed with his own work at the Gavin Brown Gallery in Harlem, and wrote this about Kellogg: “…As she continued to write and lecture and travel, she found contemporaries in Carl Jung, Rudolf Arnheim, Sir Herbert Read and John Berger. Through the lens of visual learning she partnered with specialists in multiple disciplines, from dance to neuroscience to pediatrics. These collaborations served to both underscore and expand on her theories. They reinforced that the visuo-mental [sic.] processes of free scribbling and drawing directly correlate to the healthy development of language, literacy, early math and science concepts, motor coordination and self-esteem…”

David Byrd was not an “outsider artist” per se while the subject of mentally disturbed persons raises this thought. As a Merchant Marine he traveled in Europe the Mediterranean and Asia and he had participated in the education project of Amedee Ozenfant for two years in New York. Byrd sketched throughout his adult life and took a job working for the Veterans Administration as an orderly in a psychiatric ward for the traumatized men and women soldiers from the second world war for 30 years before he retired to a town in the Catskills. He built a house with a stone foundation in Sidney Center, New York with his own hands, which he called his “house to paint in” and devoted the rest of his life to painting from sketches and from memories.

Byrd’s very pale palette of opaque colors, with no real blacks, suffuse these paintings to effect a sort of transparent presence. The subtle and intelligent installation design deserves notice. Presented intuitively on walls painted a medium grey, each canvas, stretched with steel tacks, is framed by a border of white wall. A marvelous solution to the problem of showing the whole canvases which would suffer from framing or any thing that would obscure their edges. The play of grey and white wonderfully dimentionalizes the canvases as objects themselves. Curator Matthew Higgs chose to exhibit 24 from about 100 paintings concerned with the life of people in the psychiatric ward. An exhibition of his landscapes now open at the Anton Kern Gallery, New York. 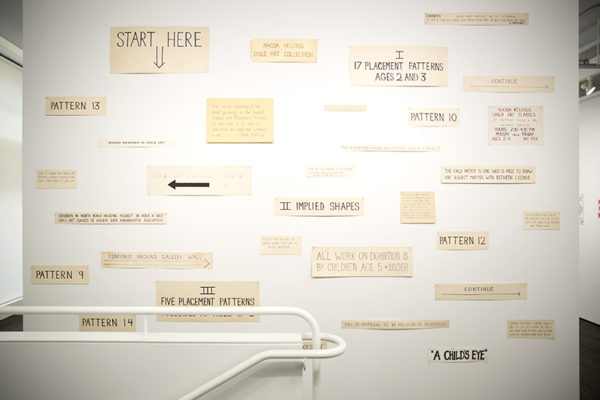 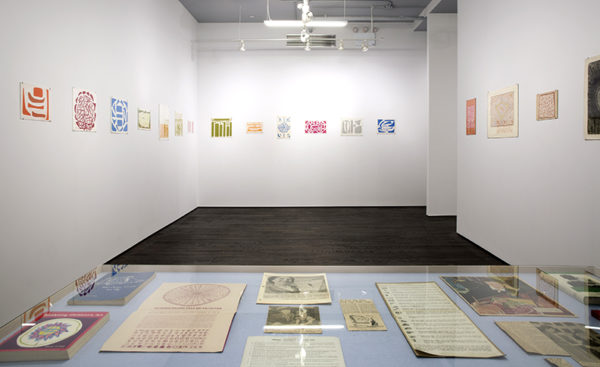 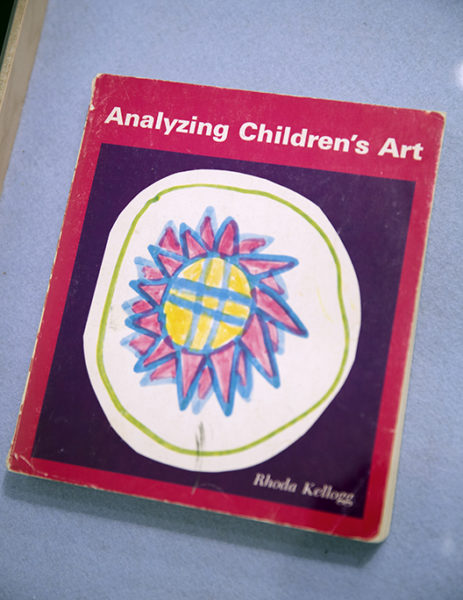 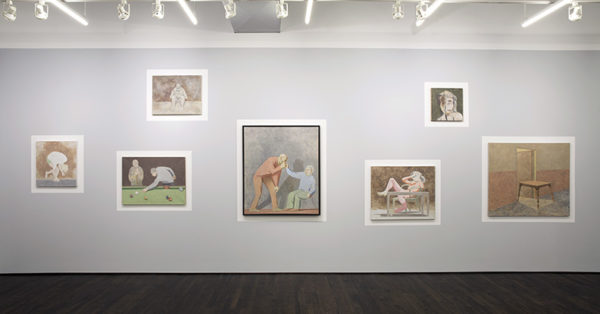 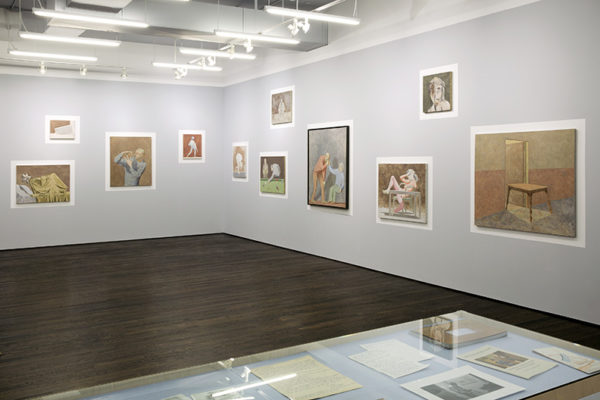 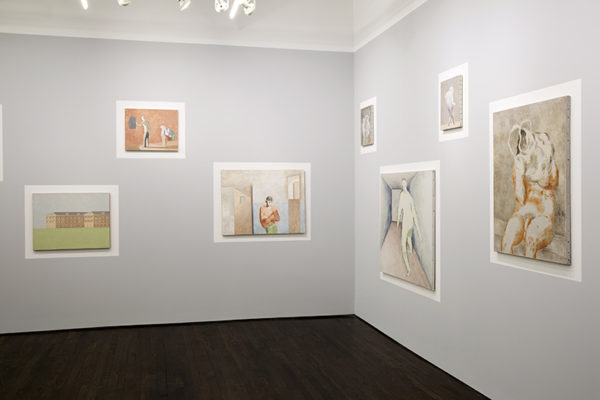 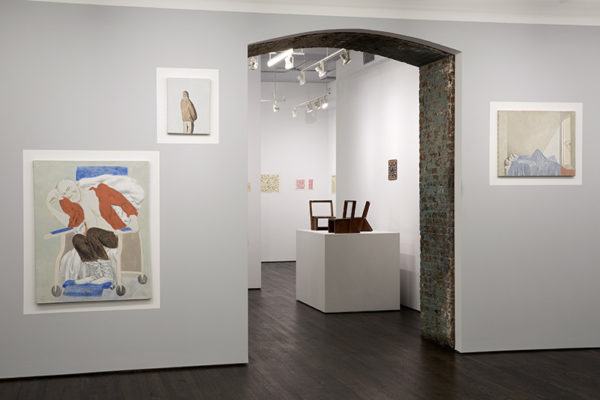