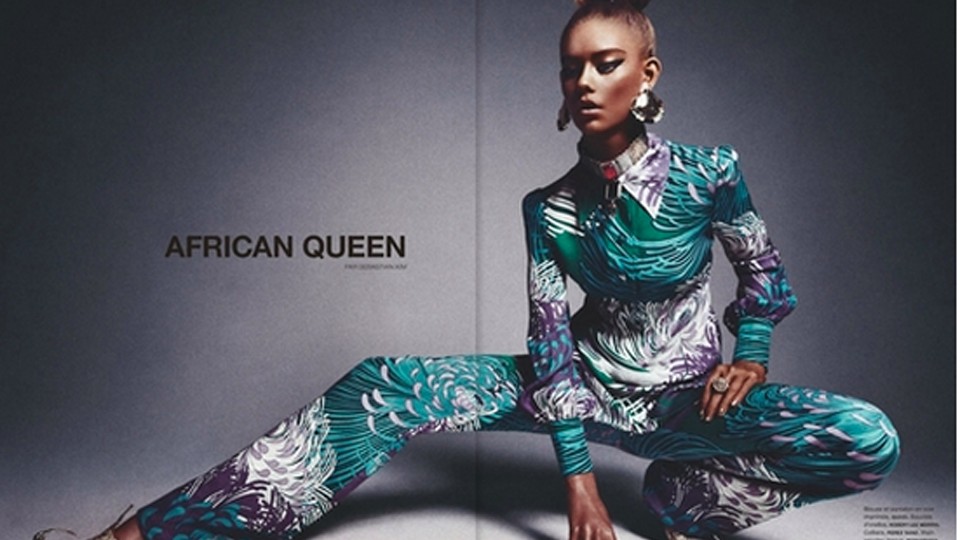 Just when Black History Month was going off without a hitch, the world discovered African Queen, a fashion editorial in Numéro featuring 16-year-old Ondria Hardin in what can easily be perceived as a watered down version of black face (it was actually a very deep bronzer). Now, let us be clear, the burden of this debacle does not rest on the shoulders of a 16-year-old model. People should be more concerned with the folks at Numéro.

Also, while we’re making things clear, it is not the “blackface” that is insulting, it is the blatant neglect. How can you overlook the wealth of young “naturally tanned” models who could have easily been the perfect candidates for this shoot? It’s not like the magazine didn’t have choices. According to Jezebel, Ford Models, the agency that represents Hardin, has several black models in their pool. Were those models as good as Hardin? Of course they were. If you would like to go as far as naming names, Kelly would have been a perfect fit. What were the folks at Numéro thinking?

Here’s another interesting fact we got from Jezebel, 82 percent of the models at this most recent Fashion Week in NYC were white. This means that not even Numéro is to blame for their misstep because, much like the neighborhood of Harlem, the modeling industry as a whole is undergoing a significant whiteout. Opinion upon opinion has been heaped onto this mounding issue, but overall, it has more to do with America sweeping racism under the rug.

People of color are constantly encouraged to forget past indiscretions. Individuals often say, “That was 40 years ago!” Not to say that some people of color don’t come off as bitter, but the key isn’t bitterness. You must be mindful. As the saying goes, which I paraphrase very loosely, “forget your past and you are destined to repeat it.”

Enter Ondaria Hardin, the informal great-grand daughter of Al Jolson. Her generation is much further removed from the Jim Crow and Civil Rights eras of this United States, than even my own generation. They never saw a black man hanging from a tree; they didn’t spit on the Little Rock Nine as they attempted to get an equal education; they are pretty much indifferent to the plight of those with darker skin and cannot even begin to fathom the existing conditions of post-racist America that has learned to institutionalized our racism. Not that my 27 year old eyes have seen any of this, but my generation are the sons and daughters of those who witnessed and partook in the volatile political struggles of the 1960’s, we have a much firmer grasp on America’s history with racial conflict because we were raised to be aware.

Sebastian Kim, the photographer responsible for the editorial, attempted to explain his way out of the situation. In an open mea culpa, Sebastian explained:

I would like to apologize for any misunderstanding around my recent photos for Numero France.  It was never my intention (nor Numero’s) to portray a black woman in this story.  Our idea and concept for this fashion shoot was based on 60’s characters of Talitha Getty, Verushka and Marissa Berenson with middle eastern and Moroccan fashion inspiration. We at no point attempted to portray an African women by painting her skin black. We wanted a tanned and golden skin to be showcased as part of the beauty aesthetic of this shoot.

It saddens me that people would interpret this as a mockery of race.  I believe that the very unfortunate title “African Queen” (which I was not aware of prior to publication) did a lot to further people’s misconceptions about these images.  It was certainly never my intention to mock or offend anyone and I wholeheartedly apologize to anyone who was offended.

Although Kim’s statement is nothing short of sincere, it is a prime example of the type of aloofness that is bred when you attempt to “forget” history. When you fail to acknowledge past mistakes, there will be individuals who will try to rationalize their actions when encountering the same pitfalls. I get it–Numéro fucked up majorly naming it African Queen, being that Morocco is located in Africa. I also get that Moroccans usually aren’t of darker skin, but why slather Hardin in bronzer?

Kim stated that it saddens him that people would interpret this as a mockery of race. Well, Kim, we’re saddened that you would darken the skin of a white woman, rather than hire an actual Moroccan model–a gesture that actively deprives a Moroccan model of a wonderful opportunity.

Some are overreacting, but this “white-washing” is a trend in fashion that is becoming more and more apparent as we speak. Those with porcelain skin or an ambiguous racial background seem to be a hot commodity. I have no problem with keeping up with the Joneses, but personally, I would like to see a triumphant return of the melanin rich model.

Of course, this could very well be a publicity stunt. Numéro‘s faux-pas could be seen as a tacky effort to drum up readership. But if it isn’t, it truly goes to show that just “forgetting” may render it out of sight, but it certainly isn’t out of mind.