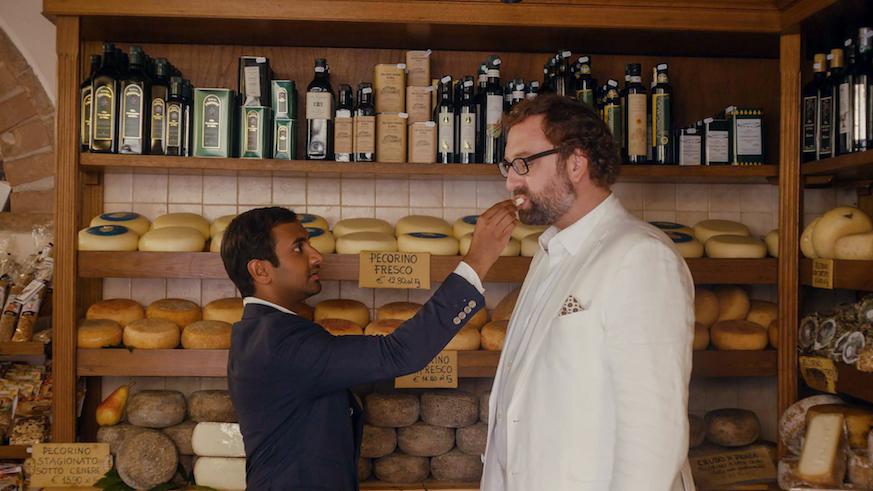 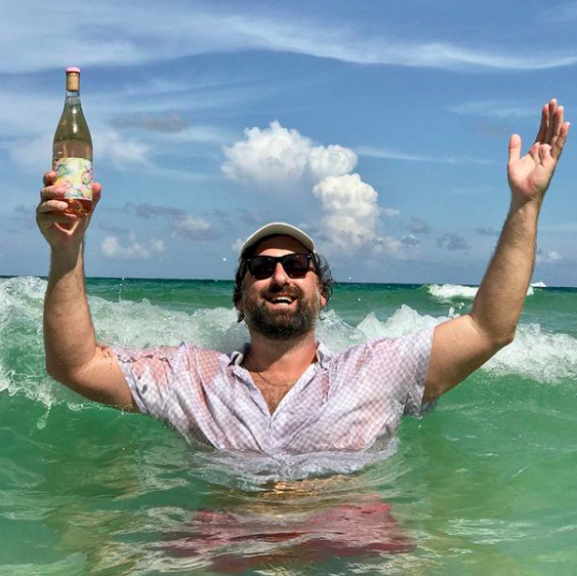 
Eric Wareheim is a funny fucking guy. His gangly, goofy looks have propelled his comic adventures into SpaceX territory on groundbreaking shows like “Tim and Eric Awesome Show, Great Job!”, while his endearing kookiness has helped make season two of “Master of None”, Aziz Ansari’s Netflix hit, an absurdist journey of deranged sanity and brolicious indulgence. Wareheim is truly silly, in every sense of the word, but his new venture, making wine, has him talking some serious shit. And when I meet him at a wine-tasting party at the Lower East Side wine bar The Ten Bells, where he is promoting his winemaking venture, Las Jaras, we mostly talk about art. 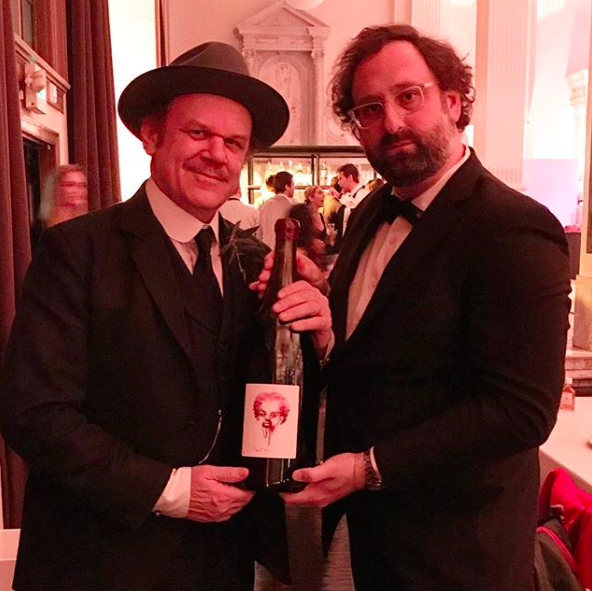 His wine bottles have labels created by his young artist friends, like Chloe Wise, Jen Stark, FriendsWithYou’s Sam Borkson, Duke Aber, Amanny Ahmad, and even Philly’s celebrity pizzaiolo Joe Beddia. He is spending time with regular customers, who are thrilled to talk to him and try the surprisingly good wines, but he is being hustled around the bar by PR people. “Sorry for this they keep pulling me around like a goddamn piece of meat!” he said. I ask him what his evening plans are. “Some of my best friends in the world live here,” he said, “including a person who made one of the labels, Chloe Wise, and we’re gonna celebrate tonight like we always do when we’re in New York.” Wise is his Instagram wife. Don’t ask. I asked. “She was my wife,” he said, “we went through a divorce, now it’s with the lawyers about whether we’re actually married or not. We don’t know.” I tell him that reminds me of the Woody Allen line from Play It Again Sam, when his wife tells him she wants a divorce. “I’ll have my lawyer call your lawyer,” she says. “I don’t have a lawyer,” answers Woody. “Have him call my doctor.” I get nothing. Anyhoo… 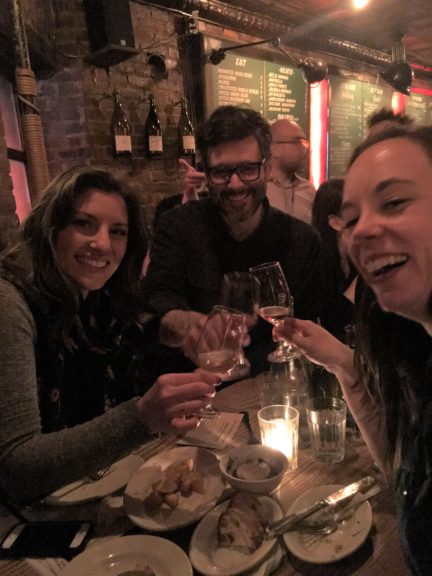 Now that I’ve cleared that up, I ask about the artists who have created the wine labels. This is an arts magazine, after all. Could people perceive this as a gimmick–does it help or hurt how people perceive the wines? “Here’s what I think,” he said. “The origin of that is that I truly feel we are in this very cool movement right now that’s a crossover between art, food, wine, entertainment, TV, it’s very intertwined. Like FriendsWithYou are making a cartoon on Netflix, Jen Stark can do whatever the fuck she wants, you know it’s very multimedia. To me, to capture their images on my wine is like a time capsule of what’s happening right now in 2017-2018, and I think, I hope, that later in life, people will look back at that time and think all those guys were hanging out, and one guy was doing natural wine, one guy was healing people with art, this other guy was making people laugh, and it’s this really positive thing.” 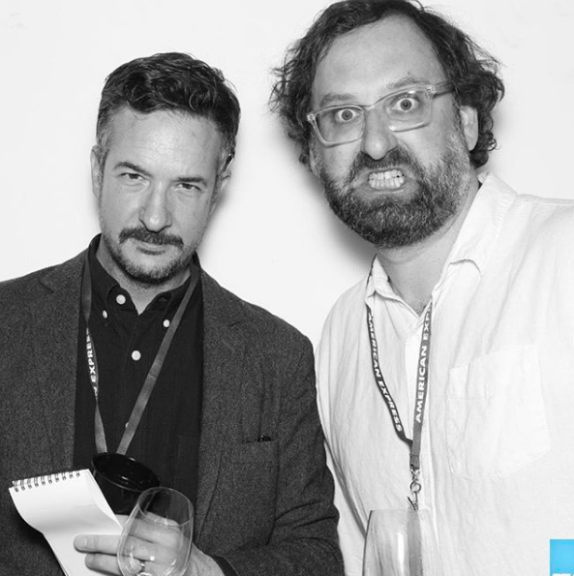 His business partner, Joel Burt, a Domaine Chandon winemaker by day, comes from a wine family, and he believes Las Jaras wines will succeed on their own terms. “We don’t think of it as a ‘celebrity wine’,” he said. “We’re just trying to make a great wine. Our model is to start small, get organic growth, not take in a lot of investors, and try to make the finest wine. And to then find a base for it. That’s how we started and that’s how we still think.”  In a very short time, they have increased both production and sales. “Our first batch was 100 cases, and our second batch was 600 cases,” he said. “We decided we to do more so we moved up this batch to 2800 cases, which allows us to have wine in New York, New Jersey, and Pennsylvania, places other than California.” They’re also going for a particular groove. “The style of the wines that we like are food friendly and fun,” said Joel. “A lot of celebrity wines are maybe trying to please a critic’s palate. We’re not trying to do that. Maybe try some low alcohol wines, drinkable now, but also age-worthy. In the wine scene where we are, they put wine in the bottle under the banner of natural wines. We make clean wines, yeah they’re natural, but people want authenticity also, something that tastes like real a natural product, and that’s what we want. People don’t want to drink commercial wines, they don’t want it to taste like chemicals. It’s really a backlash.” 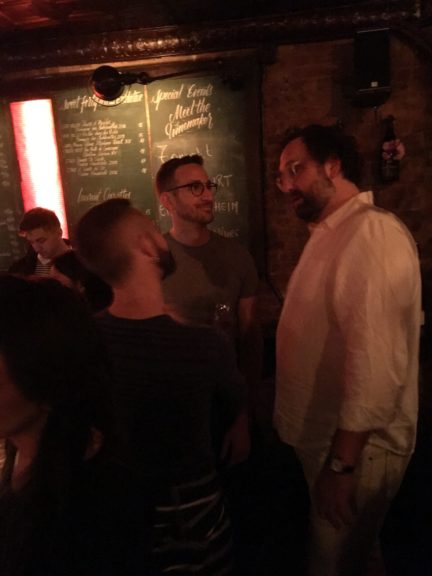 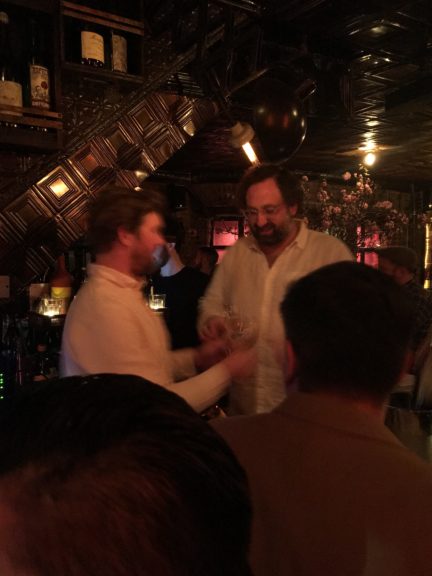 While Joel is more business-oriented, someone who speaks to the material success of the venture, Eric is more the artiste. “It’s a really cool collaboration and that’s why I’m doing it,” said Wareheim. “I think people look at the labels and they think ‘holy shit what the fuck is this?’ They want to look at it and they think, oh that’s interesting, and then people hear the story and it’s even more intriguing.” Wine’s for glugging to be sure, but real wine-lovers like Burt and Eric see more in a wine bottle than a simple alcohol-delivery system. “Wine to me is, you want to sit and look at it, and ponder it,” said Eric. “And the visual element is part of it to me. I’m a very visual guy, I make movies and TV and music videos, so to me, that’s an important thing with this wine.” Eric lives in Los Angeles but is not of LA. “I’m from Philly, came from nothing really, a middle-class family, and that’s a big part of it. All my partners, like Tim Heidecker, Aziz, Joel, we’re all kind of the same people in a way in that we are never gonna stop, we constantly push to make good stuff. But also when you live in LA, I want to stay so far away from Hollywood people, actors, producers, douchebags. So the communication of ideas in the art world, it’s just on a different level than the people in my particular trade, the TV world. I love the TV people too, but they’re not taking me to the next place.” 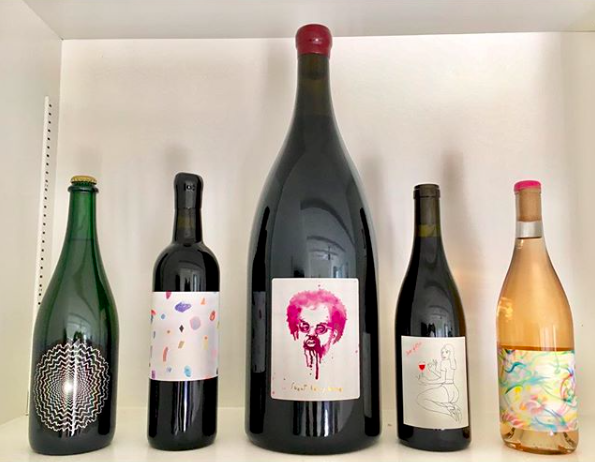 They say “In Vino Veritas”, or “in wine, truth”, which basically means, get someone drunk and they will blab all their stories, all their secrets, their “truths”. But sometimes, as with Eric Wareheim, comic actor, Instagram star, world-class gourmand, mensch, truth comes first. And the truth is that he and Joel Burt have managed, in a very significant way, to convey that very concept in Las Jaras Wines.