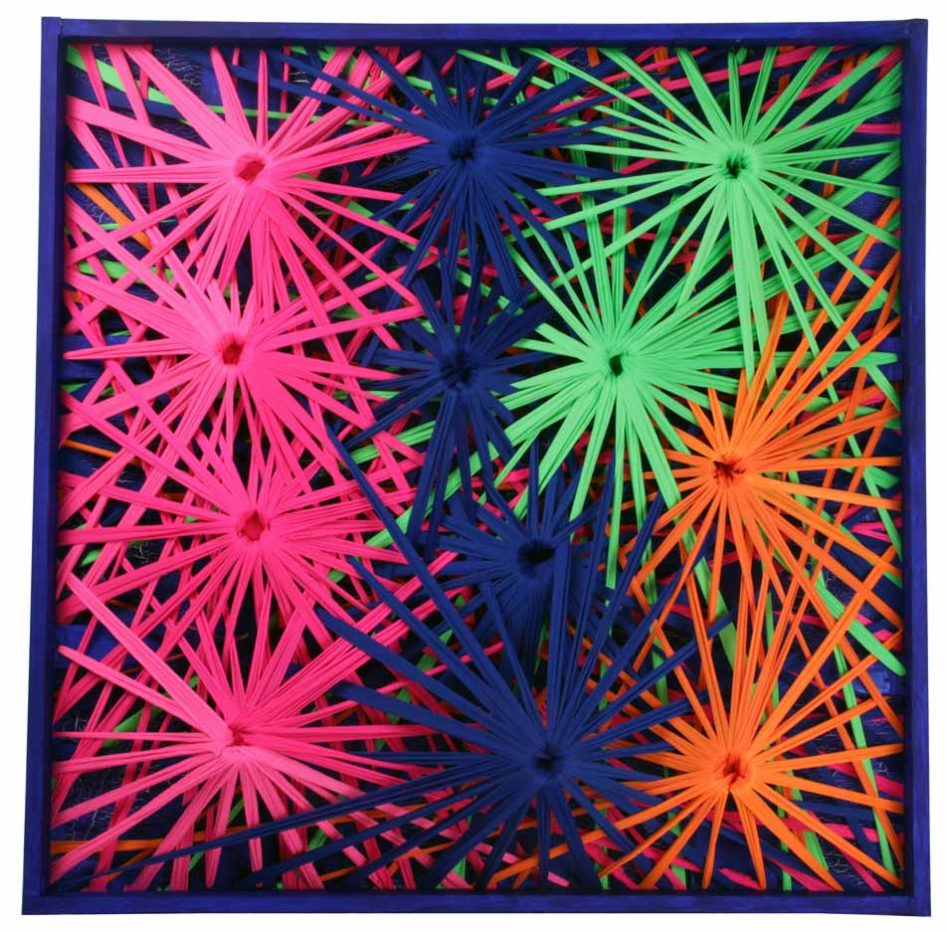 It was an early summer day in Washington D.C. and the air was perfumed with the sweet scent emitted from globes of white, fragrant flowers popping out on the branches, trees, and balconies of Georgetown’s grand homes. Yet another variety of abstract, flower-like wall sculptures were “blooming” and filling the Capital with colors and kinetic energy: Emilio Cavallini’s dynamic works, on view for the first time in Washington  D.C.

On May 4th 2018  at the opening night of Emilio Cavallini‘s show “Objectual Abstractions” at IA&A at Hillyer, his dynamic, euphoria inducing artworks stopped Washingtonians in their tracks as they stepped into the main gallery and tried to take it all in. A sizable crowd showed up to look and learn how this Italian master of color turns the humble nylon yarn into kinetic masterpieces. Cavallini’s “harmonious entropies,” the way I like to call them, will be simultaneously on display at IA&A at Hillyer and at The Embassy of Italy in Washington D.C. until May 27, 2018.

The Embassy of Italy features three large wall sculptures from the artist’s series inspired by the 16th century Italian painter Pontormo, while the retrospective on view at IA&A at Hillyer is titled Objectual Abstractions. Spanning over three decades of his career, the exhibition features nineteen of Cavallini’s works, including his best-known series Attuale-Infinito, Biforcazioni, Frattali and Diagrammi.

Emilio Cavallini, one of the most prominent Italian contemporary artists, seamlessly combines fashion, design and contemporary art. His woven, jewel-toned wall sculptures hover amidst dual registers: between painting and sculpture, between the singular and the serial, between movement and stasis, and even between abstraction and figuration. His art challenges the viewer to find order in chaos.

Since launching his eponymous label more than 40 years ago, Cavallini has combined his passion for art, fashion and pop culture with his curiosity and respect for cutting-edge technology. However, the great achievements the Italian artist realized in fashion were just a facet of his artistic output. When asked, “When did you stop being a fashion designer and become an artist?” Cavallini replies, “I have always been an artist, I have always created art.” From the beginning, Emilio Cavallini thought not in terms of fashion, but in terms of artwork. Thus, it was inevitable that he would turn to making art continuing experimenting with the same material with which he made clothing. The wall sculptures he created reformulated their optical nature through the weaving of nylon thread through meticulously arranged mathematically-based structures and framed by Plexiglas or wood panels. Having also studied math at the University in Florence, the artist has been ever-passionate about striking orders and structures that arise from chaos. The Florentine virtuoso acknowledges parallels and influences from fine art, be it modern or Renaissance. His color palette has drawn from artists as diverse as Pontormo and Malevich, while his structural gambits conjure the work of postwar material-oriented abstractionists like Lucio Fontana and Salvatore Scarpitta, as well as Op artists such as Victor Vasarely  and Enrico Castellani. When asked his opinion on the most accomplished contemporary artist, Cavallini replies, “To me there is nothing more contemporary than the Pyramids of Egypt!”. The artist/mathematician explains the long, time consuming, process behind his art by saying: “The longest and most laborious part of creating one of my artworks is drawing with pencil on paper the full pattern, based on mathematical formulas, that I will I eventually weave in 3D; from point A to point Z, thread by thread.”

Everything Emilio Cavallini does, he does according to his unique technique, exploiting the peculiar deformations his chosen material provides. Through his use of unconventional media (designed and produced by the artist throughout the years) like nylon thread and yarn spools, Cavallini explores relationships between chaos and disorder, organization and placement. His geometric patterns (squares, circles, rectangles, dots, lines, etc.), are put together through precise calculations in a process of experimentation and organized disorder. His combination of brilliant colors, dizzying patterns, and repetitive rhythms almost paradoxically create great unity within his oeuvre . With thread and printed fabric stretched over yarn spools in complex arrangements we are struck not only by intricate designs and shapes but also by the beautiful tension of  thread, a subtle force that comes through in all his works. His art is rife with metaphors of weaving, pushing, and pulling the literal weaving of thread and the conceptual weaving of art and design. His rhythmic push and pull of fabric not only catches but holds the eye. 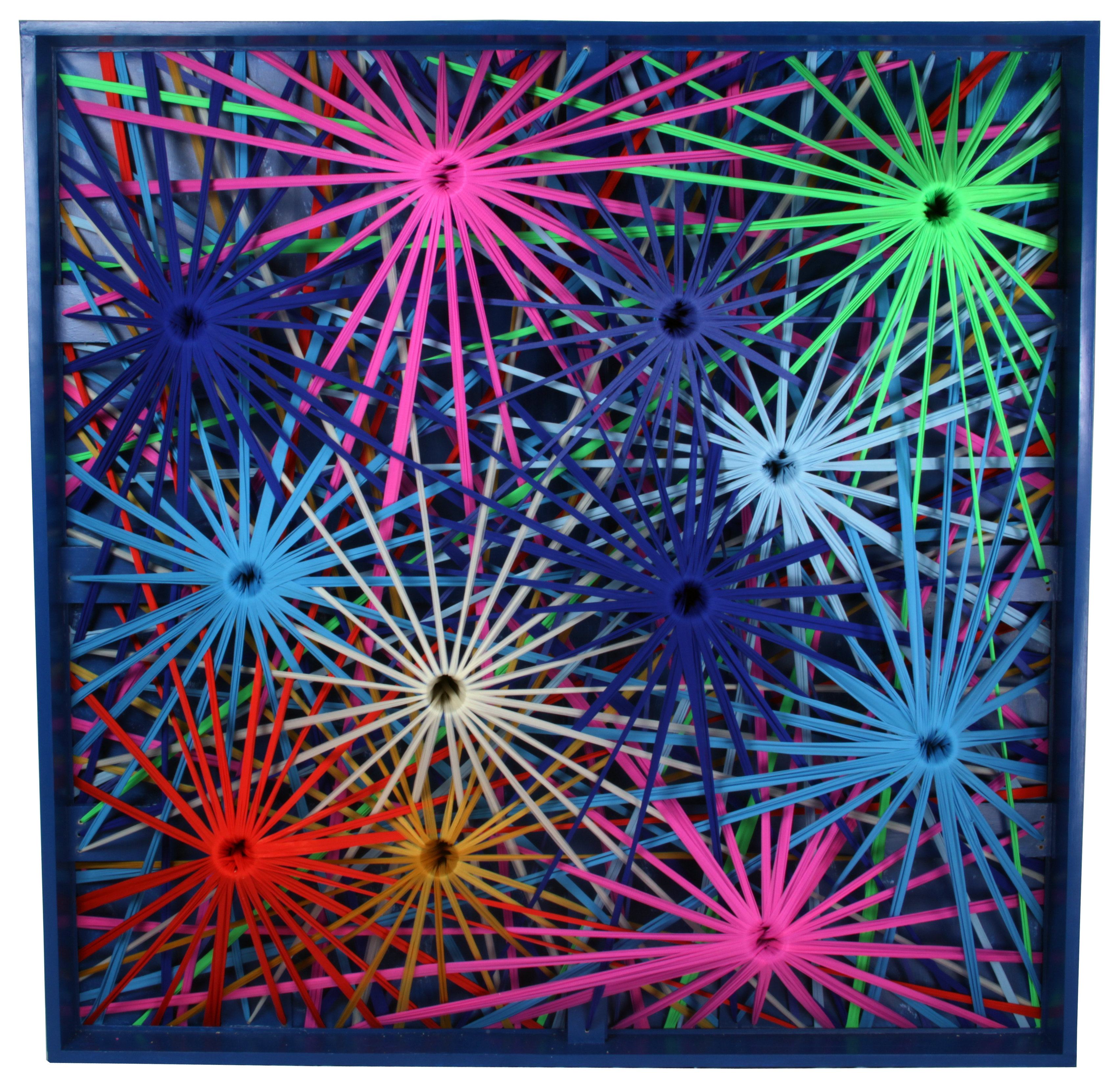 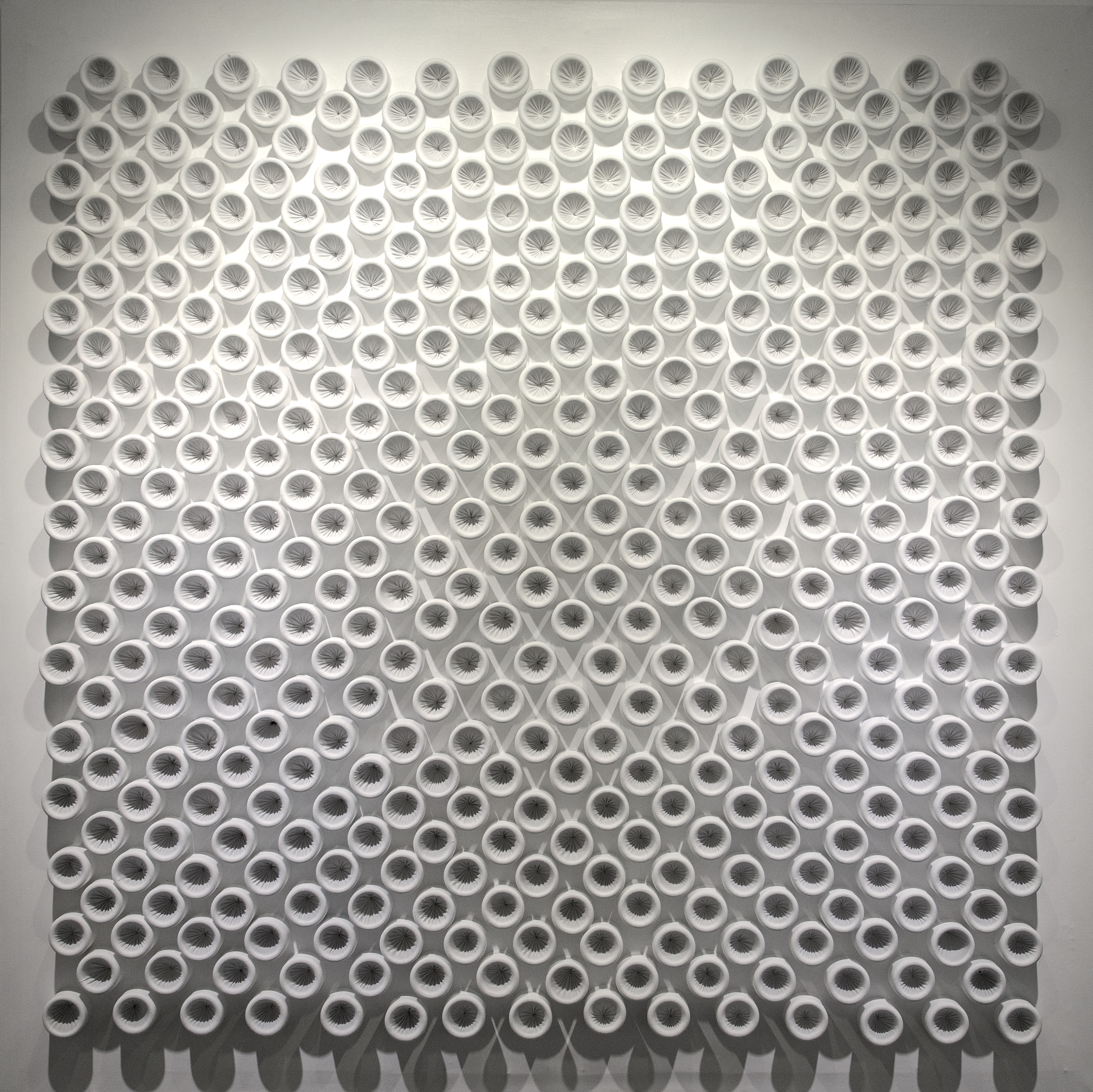 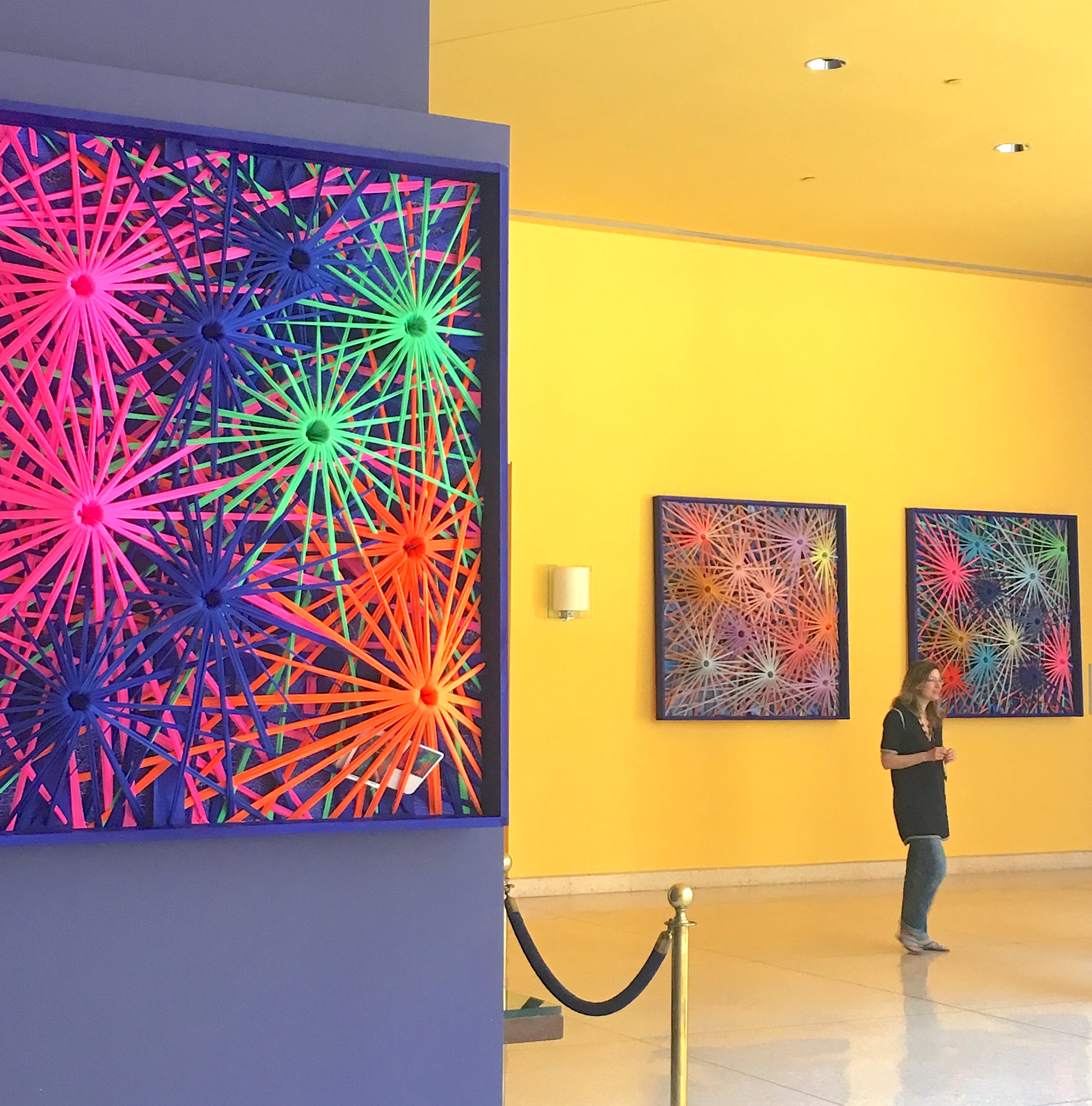 Installation view of Emilio Cavallini’s Fractals at currently on view The Embassy of Italy in Washington D.C. 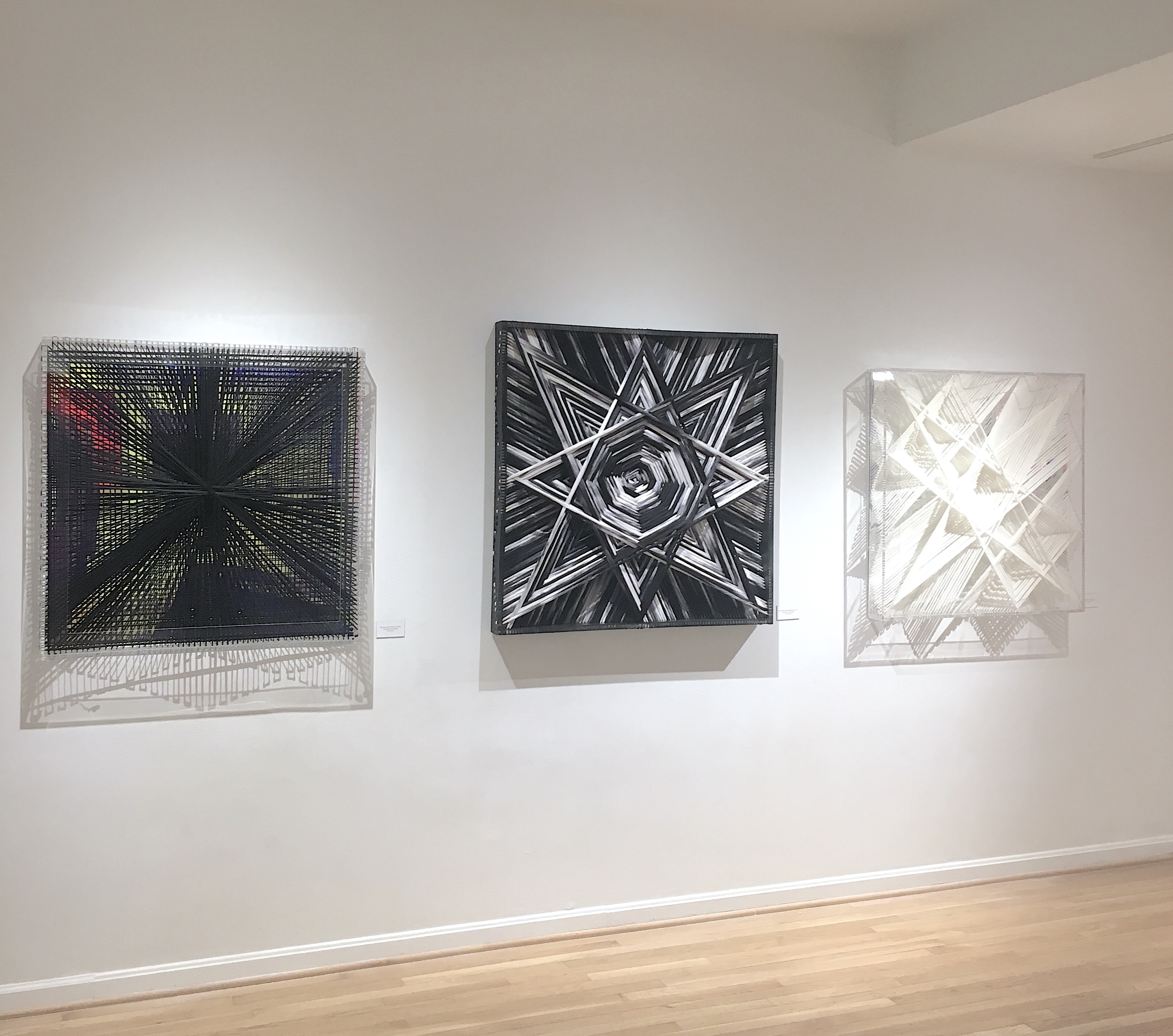 Installation view of Emilio Cavallini’s Bifurcations currently on view at IA&A at Hillyer in Washington D.C. 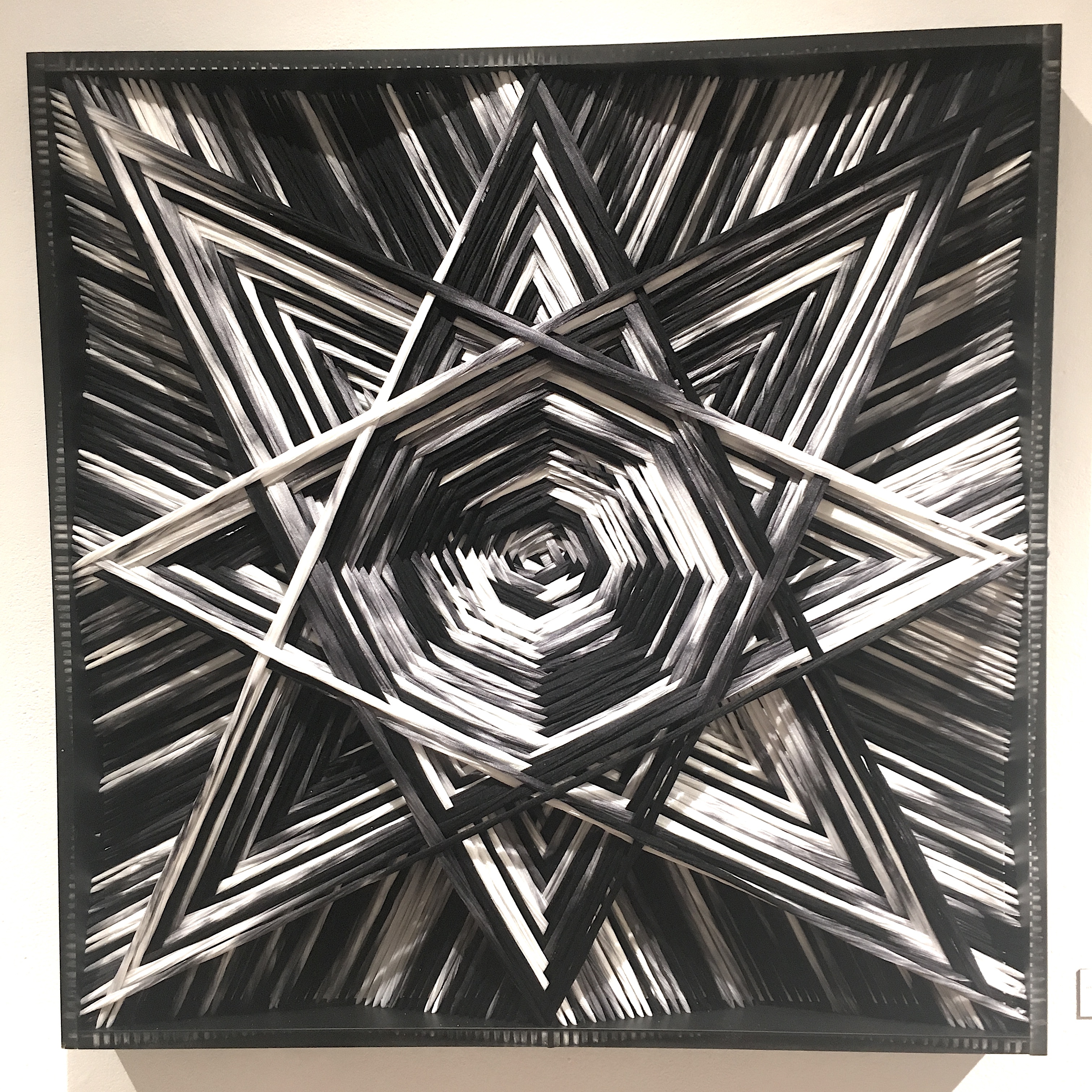 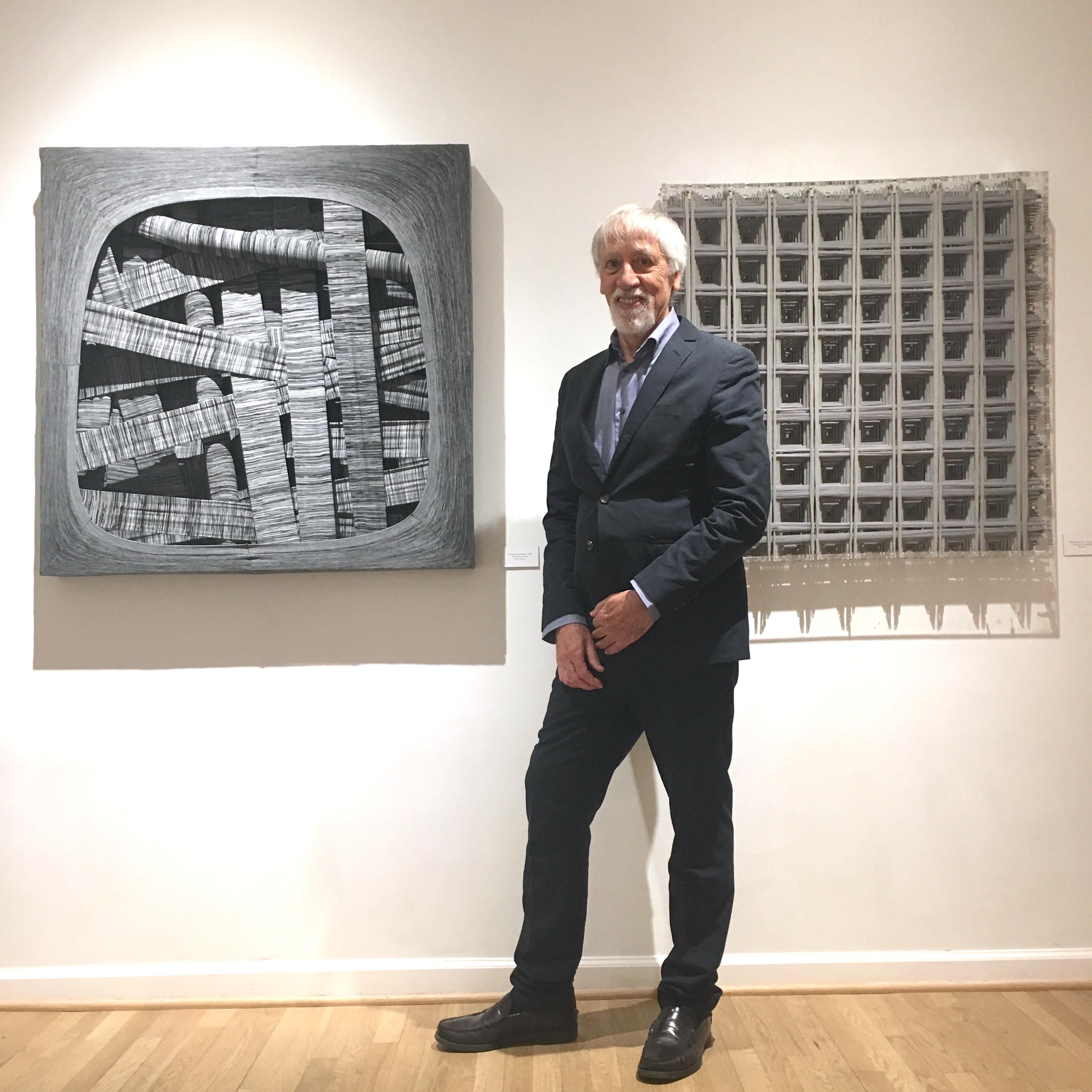 Emilio Cavallini at IA&A at Hillyer 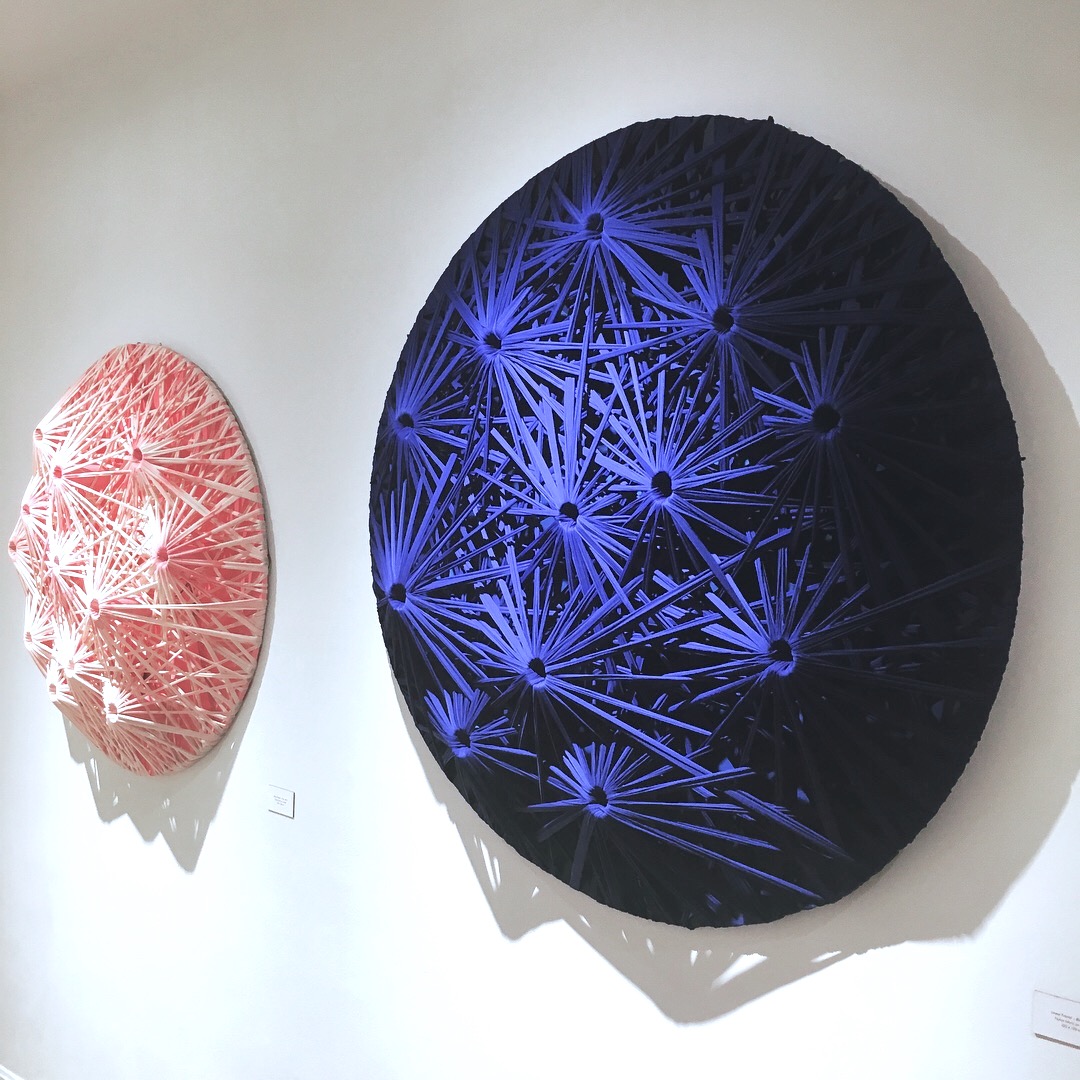 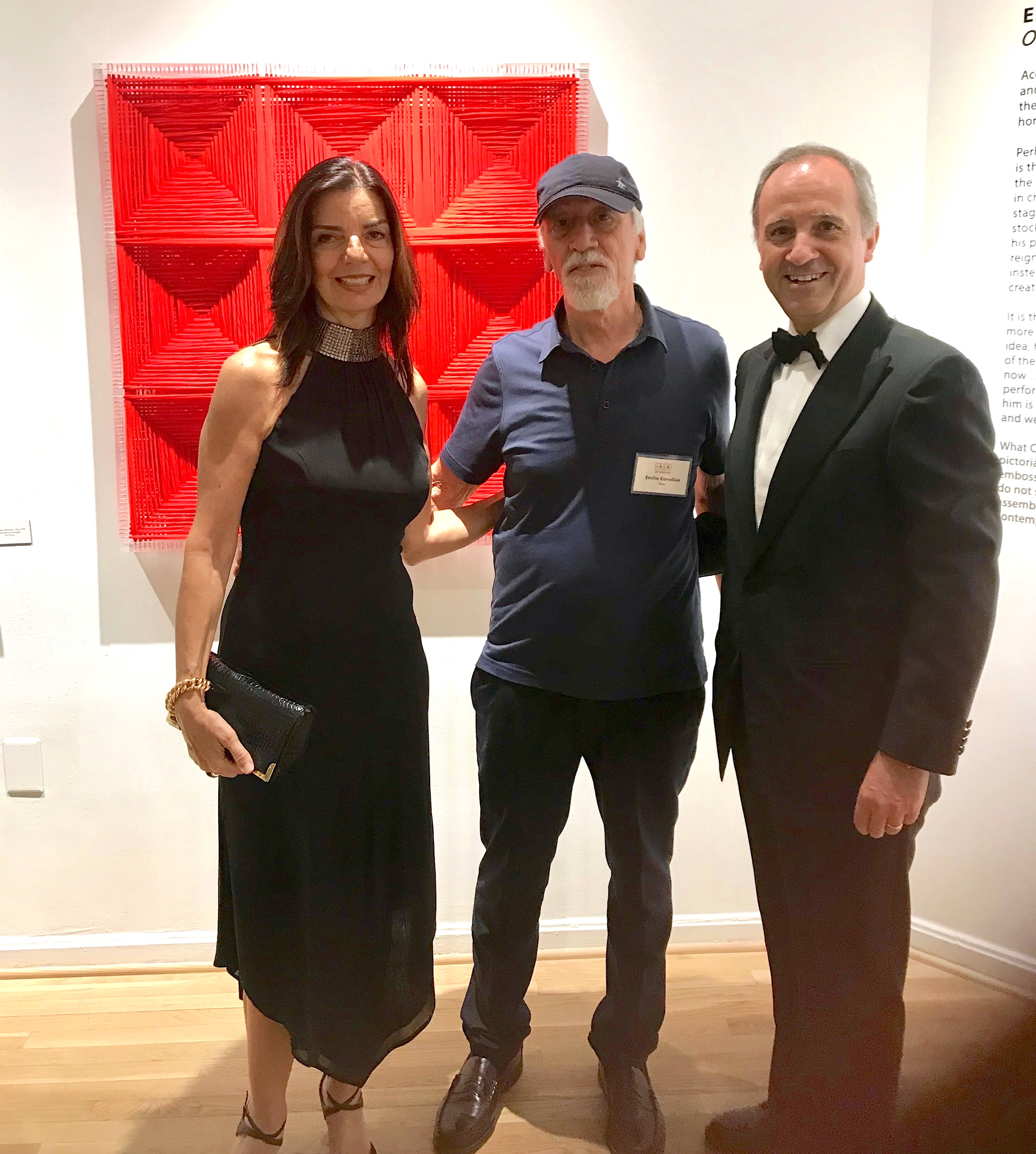 Emilio Cavallini with Armando Varricchio -the Ambassador of Italy to the United States- and the Ambassador’s wife, Micaela Barbagallo, at IA&A at Hillyer in Washington D.C.

“Objectual Abstractions”, will be shown simultaneously at The Embassy of Italy and atIA&A at Hillyer, from May 4th to May 27, 2018

The Embassy of Italy will feature three large wall sculptures (pictured) from the artist’s series inspired by the 16th century Italian painter Pontormo. The paintings will be on view from Monday through Friday, from 9am to 5pm, by appointment. For more information please visit: http://www.iicwashington.esteri.it/

Spanning over three decades of his career, the exhibition at IA&A at Hillyer is a retrospective featuring twenty of his works, including his best-known series Attuale- Infinito, Biforcazioni, Frattali, and Diagrammi. For information please visit: http://athillyer.org/

Emilio Cavallini (San Miniato, 1945) is a renowned artist and designer whose forty-year contribution to the fashion world includes singular creations for the houses of Mary Quant, Dior, Celine, Balenciaga, Alexander McQueen, and Gucci. His eponymous label is exported worldwide, from New York to London, Paris, Milan, Tokyo, and beyond. In 1989, he was awarded Venice’s Leone d’Oro for creativity and innovation. Italy’s Prime Minister and President recognized his artistic and industrial contributions over the last decade with several national honors including “Knight of Industry”, “Officer of The Order of Merit of the Italian Republic,” and “Commendatore.” In 2010 Skira Publishing issued an artist’s book published to celebrate three decades of his art practice. Cavallini’s work was presented in a solo exhibition at the 2011 Triennale of Milan, in which a site specific, four-meter cube of stocking thread was featured. His work has been the subject of critical texts by Sergio Risaliti, Laura Cherubini, Silvia Pegoraro, Peter Frank among others.