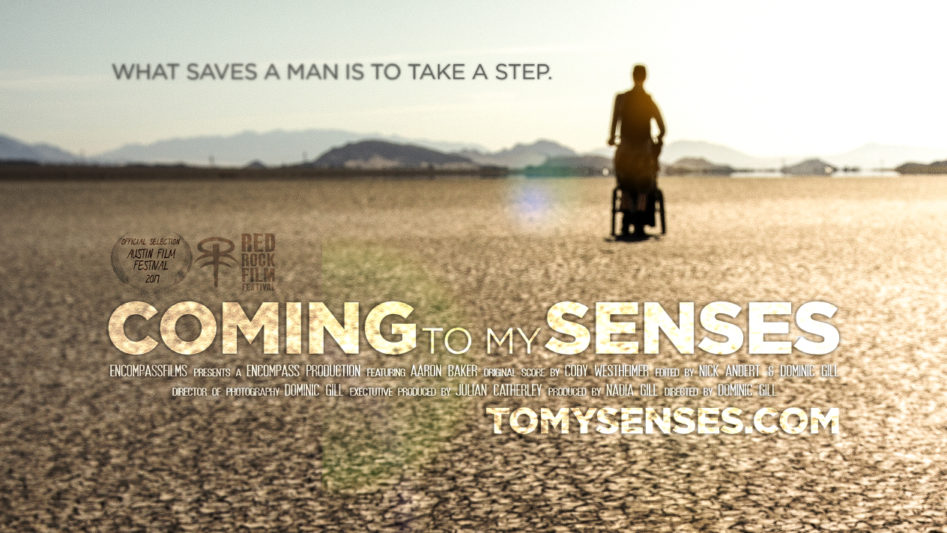 Aaron Baker was barely out of diapers when he learned how to ride a motorcycle at the age of three. At the age of 20, he was no longer able to feed himself after a crash, breaking C4-5,6 vertebrae, rendering him a quadriplegic, paralyzed from the chin down. Aaron who had been highly capable could no longer do anything for himself. He had lost most of his physical senses. Or had he? Doctors had given him a one in a million chance of ever being able to feed himself again. There was something that Aaron had that most people do not. Aaron did not have a supportive mother. He had, Laquita Dian, a rabid advocate who not only happened to be his mother but was also an athlete in her own right. She “adored his passion, his focus but [she] so wanted it channeled in a different way.” Her physical strength and this seemingly unending reserve of mental bandwidth proved instrumental in Aarons recovery. She sought out the best restorative exercise specialist in the country, Taylor-Kevin Isaacs to work with Aaron all because she saw one of his toes flicker. Shortly after the accident, Aaron’s sister, Arielle, was visiting

“The moment that I hit the ground I remember looking at the dirt and the rocks thinking there is no difference between my hand and that stone.”

him in the hospital and decided to paint his toenails with different color nail polish. Initially, Aaron was irritated. This was 1999 five years after metrosexual was a thing but not on the motocross circuit. Nail polish on men was not au courant. His sister’s point was who cares? One of the nails she painted was blue and Aaron just kept staring at that toe and asking it to move. And it did. First the flicker of a toe, to the contraction of multiple muscles, Aaron’s recovery endures. He’s made it his life’s work to show what restorative exercise can do for severe spinal cord injuries. 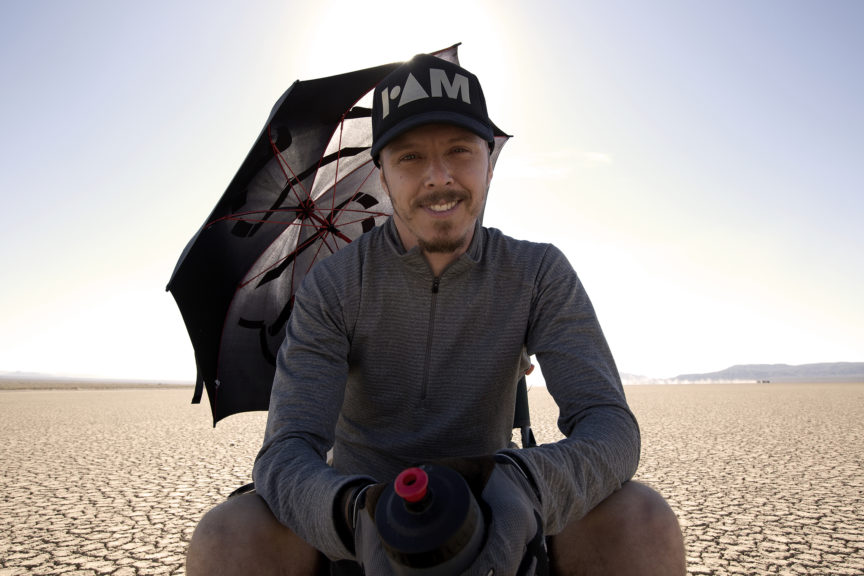 Aaron in the Desert (Photo Courtesy The Orchard)

The co-directors, Dominic and Nadia Gill of Coming to My Senses are not new to the world of adaptive sports. It was no surprise that they became interested in Aaron while casting a TV docu-series where Dominic took a tandem bicycle across the United States with ten people with disabilities. Aaron had already been across the country twice on his own power, so he didn’t fit the role they needed for the series, but the filmmakers loved his vibe and decided that they wanted to tell his story. 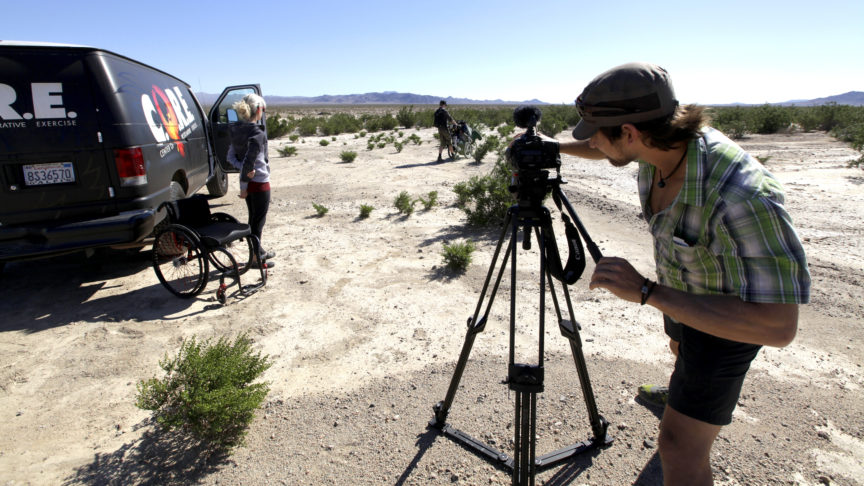 The following are highlights from an interview with Dominic Gill. It has been edited for brevity and clarity. 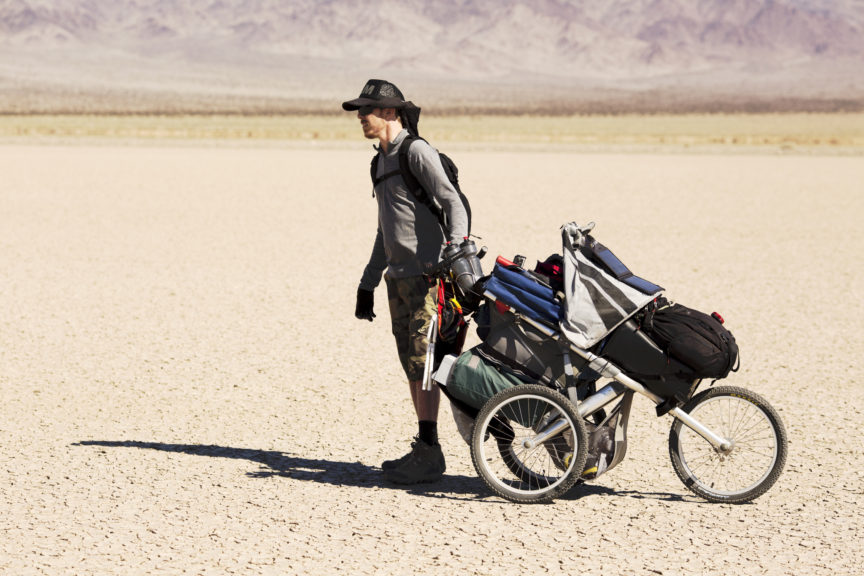 Aaron in the desert (photo courtesy The Orchard)

I have always been very interested in pushing my own limits.  As a lifelong rock climber and mountaineer, I’ve been in many situations where the obstacles seem too daunting to pass.  When I heard Aaron’s story it resonated with me strongly.  I just felt it was such an example of how to live your life and that there was not a person who couldn’t relate, even if the obstacles weren’t physical, but rather emotional or psychological.  Everyone has been there.  It was not the spinal cord injury that attracted me, it was his spirit of indomitability and ability to reject the status quo.

On Spending So Much Time in Death Valley 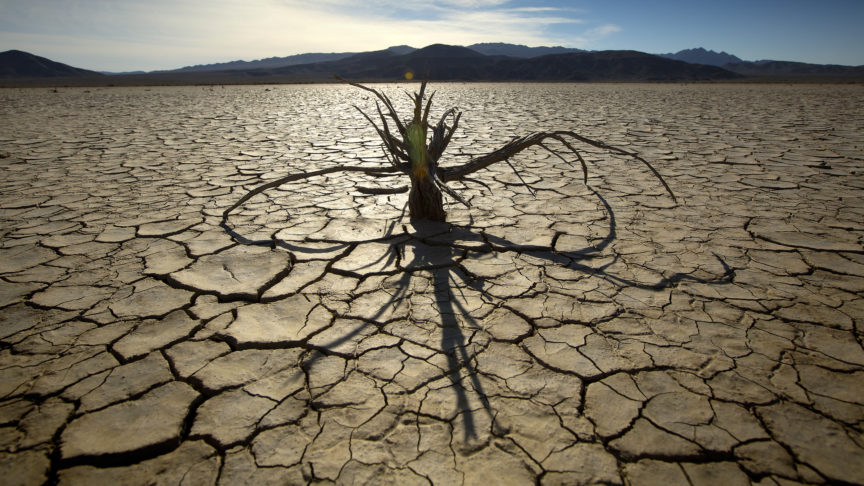 ​I love the desert…almost as much as the mountains.  I had been to Death Valley once before and understood it as the perfect location for Aaron’s journey, for two reasons 1) it was flat and would provide the least among of obstacles for Aaron in order to make his accomplishing the task conceivable.  and 2) because of the symbolism and how it really could bring into focus Aaron’s story.  In terms of actually making the film, I found the setting inspiring.  And walking alongside Aaron for 7 days and pulling my gear in tow was the perfect way to let the environment seep into my bones and also get the best shots.

On when and how to help Aaron if He Fell

We didn’t really talk in advance about where I should assist him.  I kind of just felt it out.  We did both understand that the point of the film was not that he should ever be truly in peril — though that is always a risk.  But rather the point was for him to try and do the thing he had never really done in any real amount since the accident — walk.  So, when he seemed to need help, I just thought about whether the story would be too inconvenienced by it and decided no.  Additionally, I looked for signals from him about whether or not he wanted me to help.

On the biggest surprise while making the film 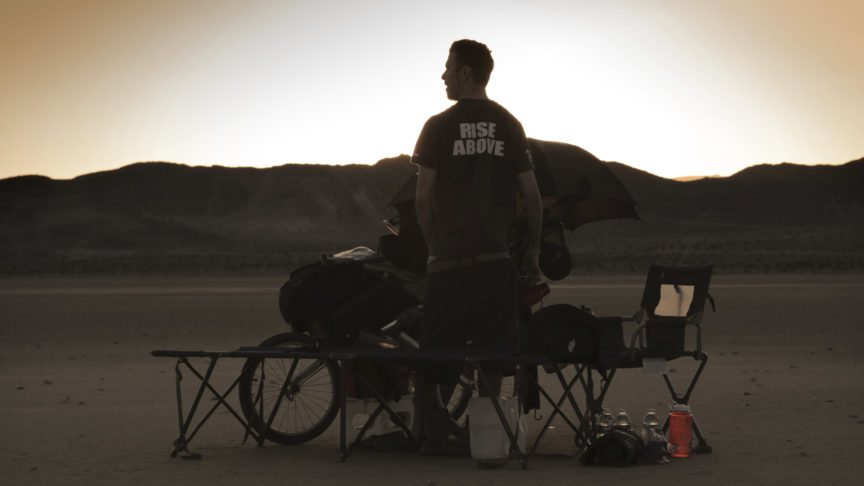 The thing that surprised me the most about making the film was going from believing that Aaron was a miracle, to understand that Aaron was a product of resources availability and effort.  When we started to research more and more people, who were doing similar things it became abundantly clear that this recovery didn’t have to be limited to just a few, and that even if not everyone could learn to walk again, a lot of mobility could be reclaimed that would improve people’s quality of life and that it was a massive failure of our system to provide any of those resources.  I’m very proud of Aaron for taking an entrepreneurial approach to offering such resources to those who have no other place to go.

On the Choice to Use Reenactors

When you make a documentary, you try to make it as cinematic as possible.  Once write out the story you search through the footage that you have to support the telling of the story.  A lot of times you come up short in vérité footage or archival footage and you have to rely on [the] interview to tell something.  It’s pretty devastating to the pacing of a film to have to watch someone give an interview to the camera for 3-5 minutes without any visual aids over the tops.  You start to think of your options then, a lot of people use animation, but recreation is what we opted for.

Aaron had been physical since the moment he could crawl, he never stopped moving, He was forced to come to a complete stop just when most people are getting going with their lives. Over the second half of Aaron’s life, he did what so few people are able to do, he took his “mind-numbing” anger and turned it inward, somehow electrifying his nervous system to adapt to working around an irreparable spinal cord injury. He flipped the narrative and joined together with his mother and Taylor-Kevin Isaacs M.S., CPT, CSCS, MELT  and they created C.O.R.E. (Center of Restorative Exercise). Walking across the desert was audacious and humbling. The earth is cracked, it is below sea-level. It wasn’t without risk. Seeing Aaron fall is like watching a turtle stuck on its’ back.  “Lying there in the dirt motionless and completely aware of my plight brought forth a life-altering realization of my place in life.  No longer a professional motorcycle rider, or skateboarder, surfer, snowboarder, mountain biker, or even a simple fisherman made me realize that I am destined to do far greater things in my life than winning championships aboard a motorcycle.  Things that affect people’s lives.  I can help people through my own adversity bringing hope and inspiration to those without”.

Coming to My Senses

Available on Amazon and  iTunes