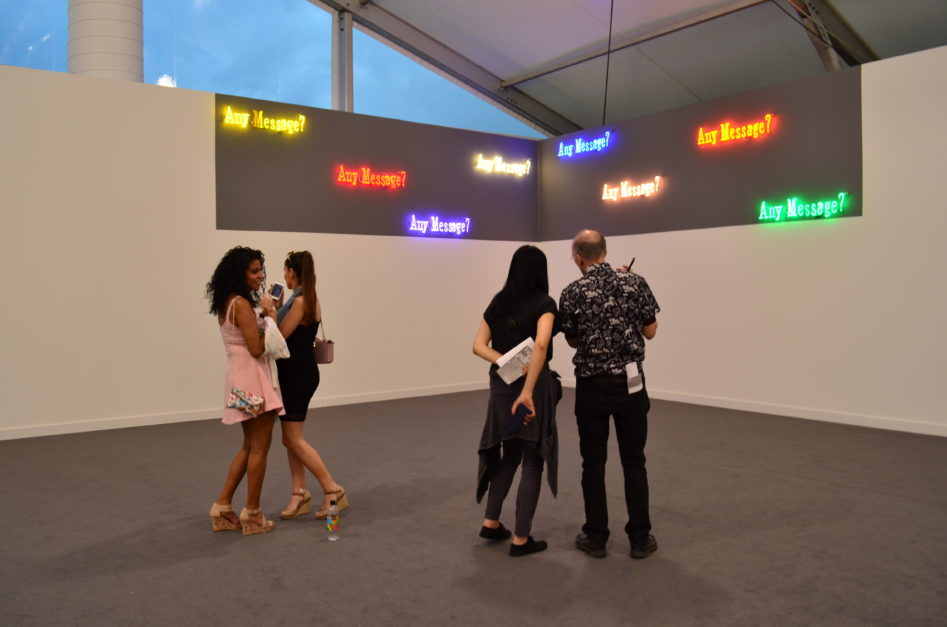 Nothing is free in life, in the end you pay for your pleasure with pain, heartache, and decay. Consider the art fair, a dinosaur whose fossil was unearthed and resurrected, Jurassic Park-like, on Randall’s Island this week, and whose lumbering stride threatens to trample everything that fails to hightail it out of its path. So come, go, and come again with me to Day 1/2 of Frieze New York, where the tent rumbled and quaked, Jerry Saltz rambled and flaked, and the VIP fairgoers, well, you know them, they’re quite lame. 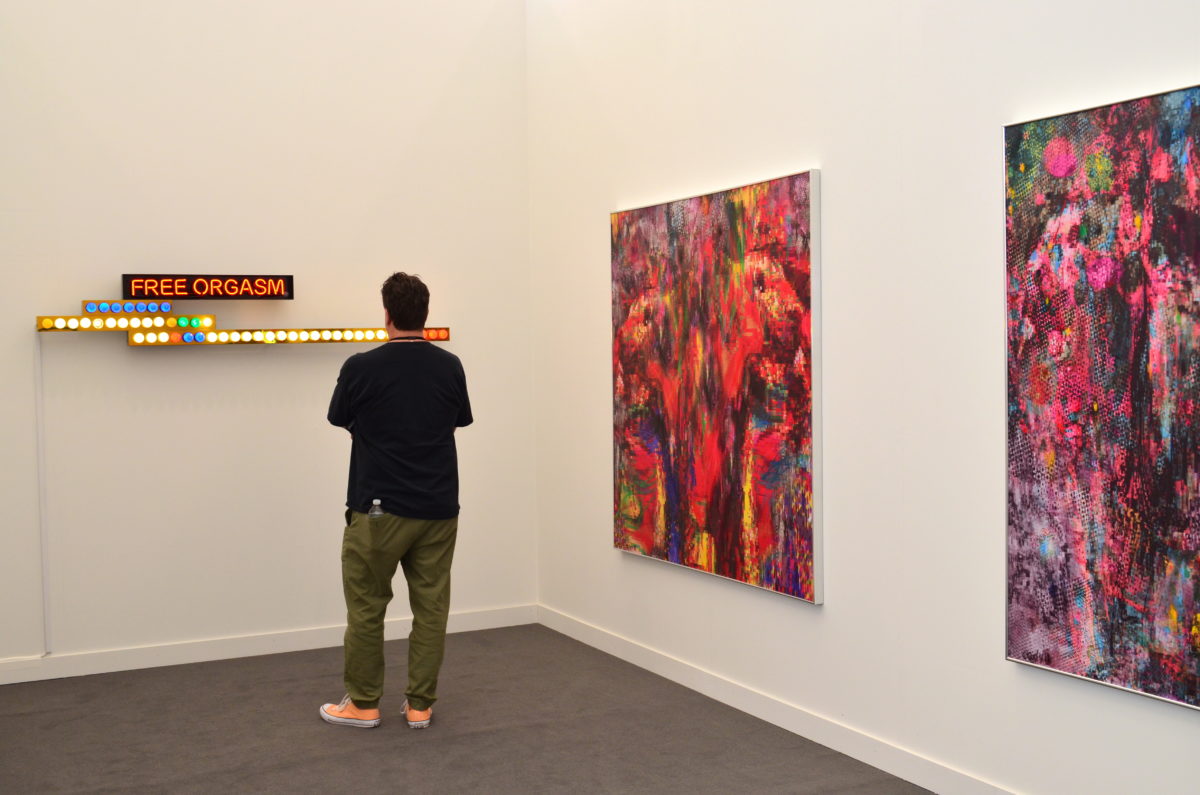 What could possibly be on the mind of recent Pulitzer Prize-winning art critic “Uncle” Jerry Saltz? How’s about, everything? Hey, it’s crowded up in there!

“The fair is over. It happened yesterday. Oh, did I say that out loud?
100% I believe the galleries should get their 50%.
Larry “Death Star” Gagosian
Fuck you Academia
Picasso was one of the best painters of the 70’s
Late Picasso! Why is there not a show?
Jeff Koons has made some good art
The art world has to stop rediscovering old artists
These are clouds!
Artists: Job One: You must be able to invest or imbed thought in your material
Marcel Duchamp was able to invest his thought in a urinal
The Egyptians had it, the Greeks had it, and if you don’t think the Romans had it, go to the Met!
Van Gogh: He killed him self right before he got it right. I hate him for that!
Jackson Pollock: Is this a painting?, he asked his friends. Not if it was good or bad.
Artists, ask yourself: Can I change the categories of Art?
I wore high heels once. Worst pain I ever felt.
You must make an enemy of envy, artists.
Job Two: Work work work work work. Working is different than analyzing
Artists do not own the meaning of their work
The minute you think you know a work of art it is dead to you. Oscar Wilde.
Spend three days at the Prado
You know nothing John Snow!
You as artists need to stay up late every night with your peers.
I’m not talking about movies and I’m not talking about Trump!
Just because you make art about the right thing doesn’t mean your art is right
You don’t know what you’re doing, but you know how to do it. (Artists)
Critics stopped offering opinions after my generation
Academia has overtrained the new critics
Too many critics don’t write opinions
Critics are letting you down
Four dealers, one collector, and two critics is all you need. Can’t you convince
just seven people?
The reckoning in the art world is coming!
Passing on the information of the tribe, that’s what we do at art fairs
Andreas Gursky.
Go to school ’cause that’s where you meet fellow vampires
I lose fifty friends a week.”

…and that’s all folks!

Here’s a big flag. It’s at the entrance to the fair. It’s Hank Willis Thomas’s tribute to the victims of gun violence in 2016/2017. Each star represents a dead person. Welcome to Frieze! 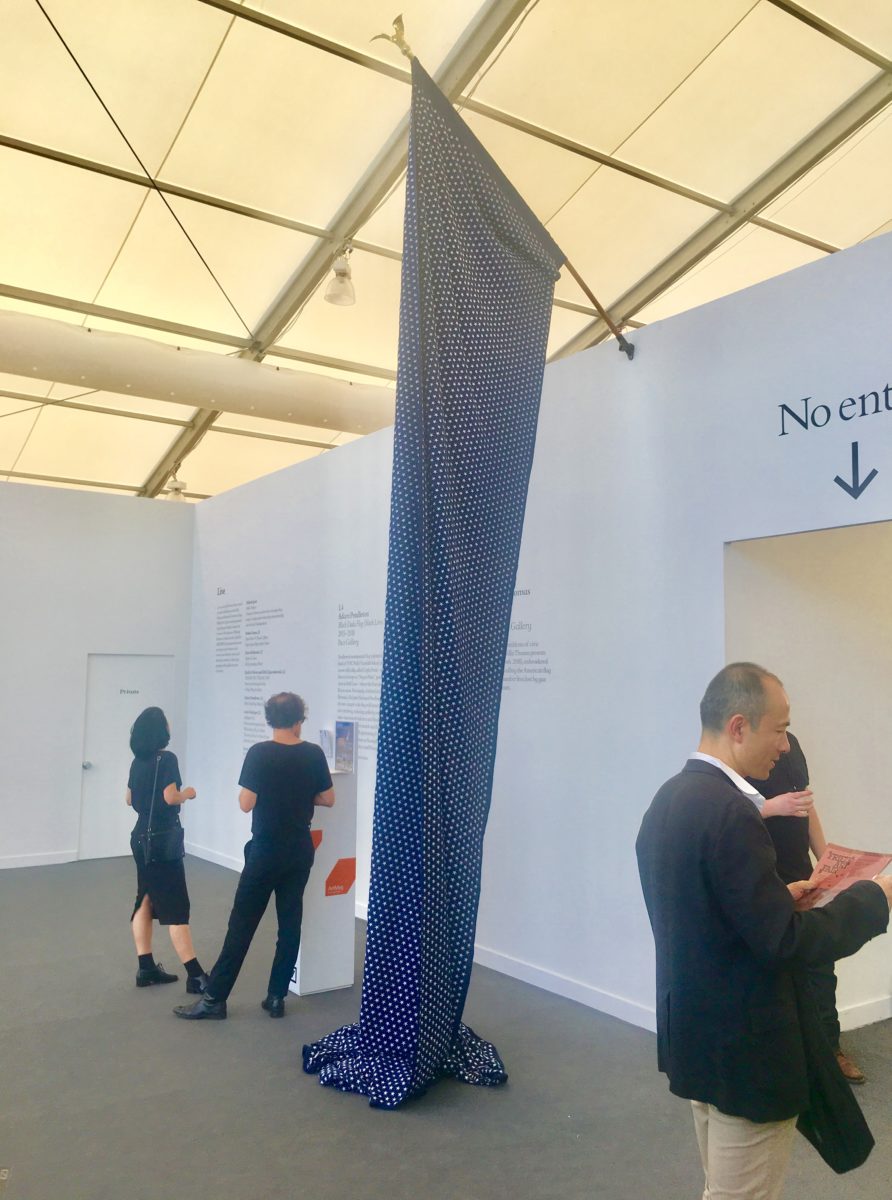 Hank Willis Thomas
Tribute to those lost through gun violence in 2016 and 2017, ASSEMBLY at Frieze New York 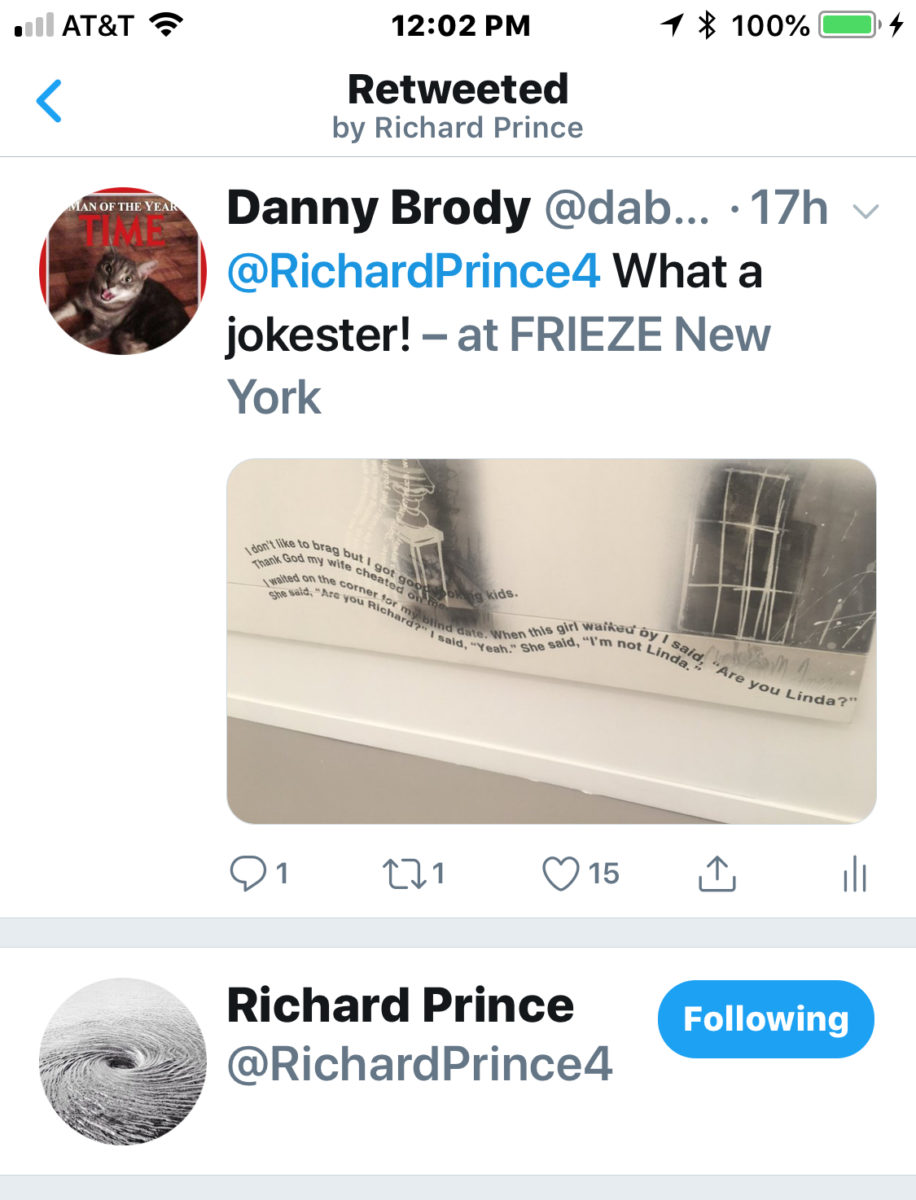 Oh, and Richard Prince retweeted my tweet of his painting from the fair. Hope I didn’t peak too soon!

Finally, some rumblings were heard at the fair. Can the tent last another three days? Stay tuned!!!