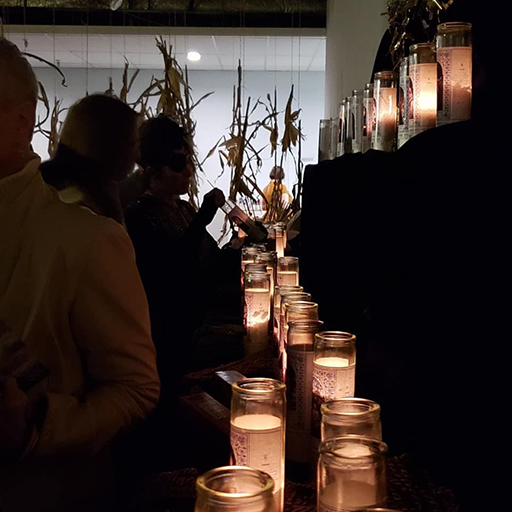 Phos Hilaron: From the Masses Rise the Saints by Ventiko debuted in 2018 at Chinatown Soup. The show was an exaltation of togetherness countering the current socio-political landscape in which she took photos of 100 people, or saints, where each saint write a prayer during the first 100 days of Trump’s presidency. She then created prayer candles of each saint called ‘the Saint Candles’ which was displayed in a chapel, a reliquary, and an altar installation, tying the individual with the collective as one walked through the show. Ventiko utilized the crowd-sourced model to fund this exhibition showing the power of the masses to express themselves regardless of the political climate at that time. There was even a cool prayer book made available to all saints to take home with them.

Last year, Ventiko produced her second install of Pho Hilaron, only this time she debuted this show in her hometown at the Schwitzer Gallery in Indianapolis. Many artists never get an opportunity to return to the source after coming to the art capital of the world to become the artist they envisioned. When she told me about what lead to this show, I suggested that she share her journey in the form of a visual and auditory monologue that gives the audience a first-person BTS view of her homecoming exhibition.

* CLICK PLAY AS YOU SCROLL FOR THE FULL EXPERIENCE!*