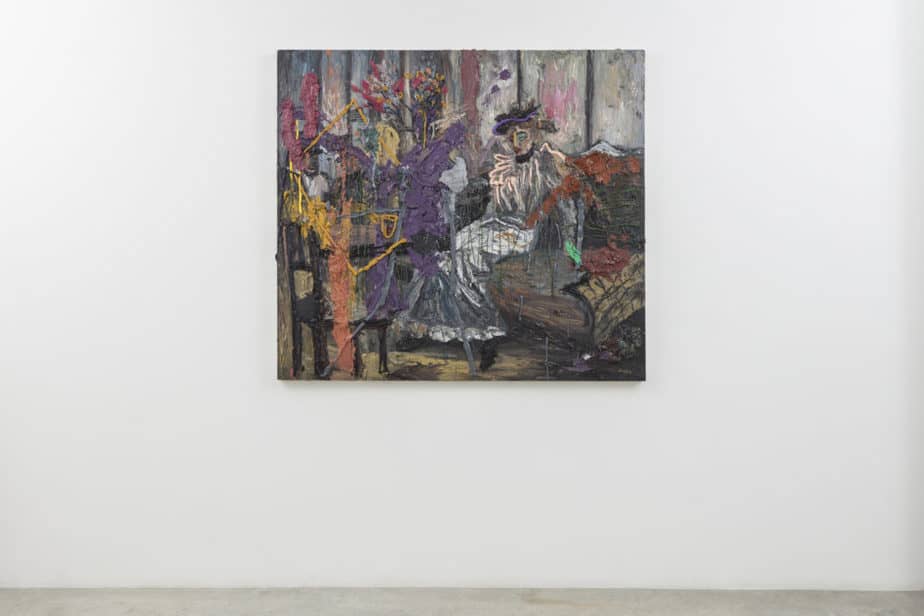 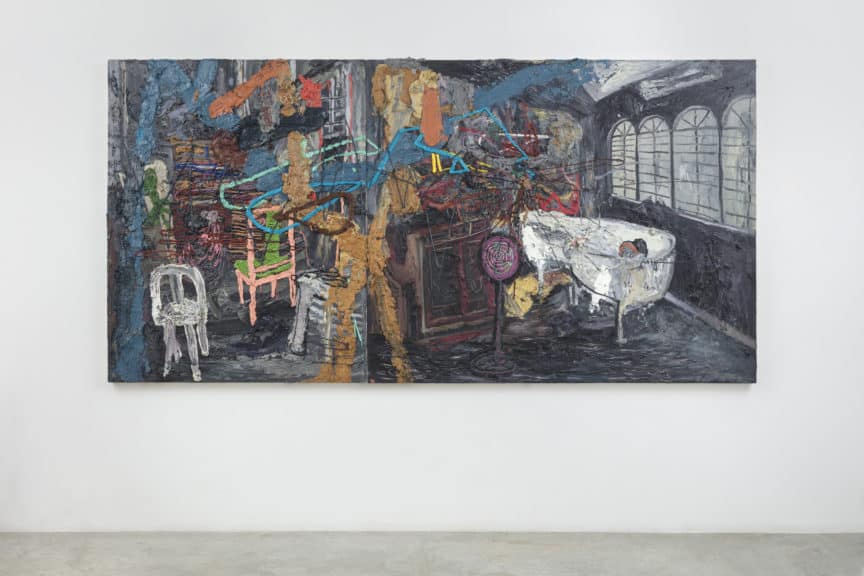 The young Filipino artist Jigger Cruz uses the word “playful” a lot during our brief conversation Thursday night inside Chelsea’s Albertz Benda Gallery. Cruz was celebrating his first solo exhibition in the United States, Picture Towards the Other Side.

“Chaotic” is another word that comes up frequently during the conversation. It becomes clear that these two words-playful and chaotic-are the binary pillars that seem to define Cruz’s densely populated hometown city of Manila (capital of the Philippines), his remarkable paintings, and perhaps also his charming but weary baseline mental state. Cruz is, like a lot of contemporary painters, trying to get you to see things from a new perspective; in this case, a world-view still colored by past and present colonial narratives. 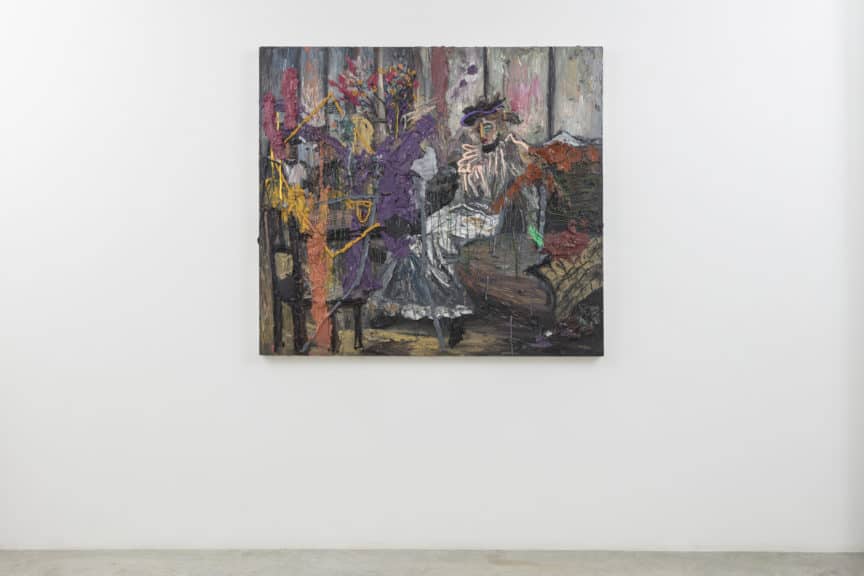 This notion manifests most clearly in Cruz’s reimagining of the great Filipino painter Juan Luna’s mysterious and seductive masterpiece, The Parisian Life, 1892. This painting crossed many hands and had many names over the years, but the title most closely related to Cruz’s unique perspective has to be Interior d’Un Café, which literally means “Inside the Cafe.” Directly before this, in 1963, a previous owner of the work, one Prof. Emmanuel Torres, called “his” painting Un Coquette. Before this, it was called The Maid (1953). These are all telltale titles that speak to a sort of playful subjugation or at least a problematic relationship in waiting. The flirtatious woman is of course the Philippines viewed through a Western, patriarchal lens; the 19th Century male-gaze on brazen display and replete with an ostentatious, geo-political, S&M wink. 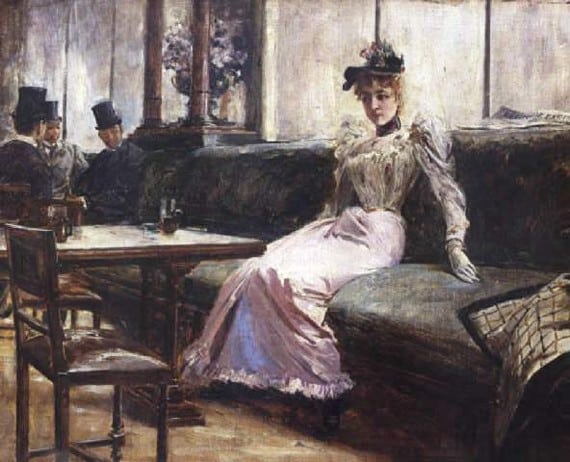 Thorsten Albertz, the gallery’s buoyant and humble co-founder, who over the last two years has illustrated a clear interest in celebrating a diverse body of exciting painters whether new or overlooked, notes that Cruz’s preoccupation with interior space has everything to do with the often oppressive noise and drama of the outside world.

“When you look at them closely, it’s really about the interior,” says Albertz, who seems to relish pulling back the many threads that overlay Cruz’s frenetic painterly weavings of boldly textured color strands, all aggressively choked and spun out haphazardly (perfectly) over the artist’s weighty canvasses. 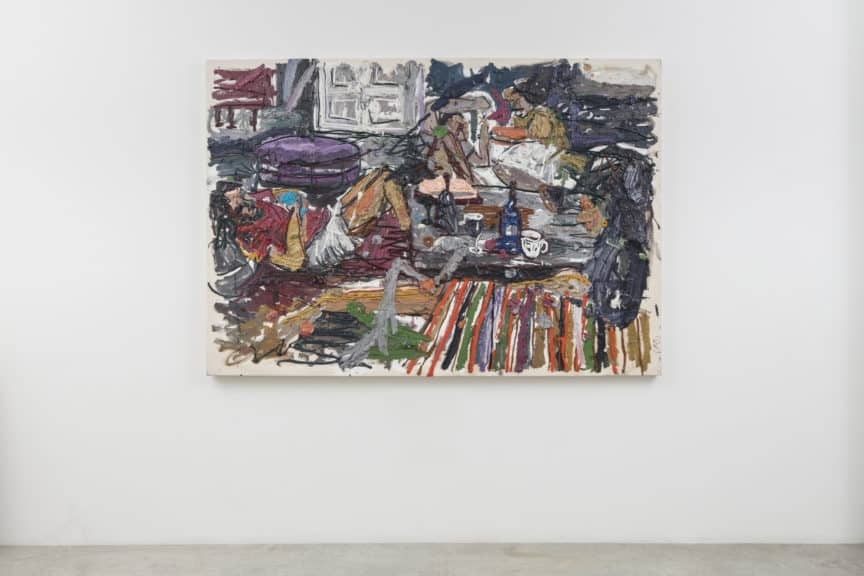 “The interior is where people take refuge,” Albertz continues, fully aware of the value and yet also the controversial notion of physical vs. metaphysical “safe spaces” in 2018, whether in the United States or abroad. “For Jigger, his home is an oasis in the middle of a sea of chaos.”

Several of Cruz’s paintings feature simple household items; brutally pink, impressionistic floor fans, exploding potted plants, a bath tub or an anthropomorphic kitchen table. Other works feature his friends or his girlfriend, all normal, domestic stuff. Often these things and humans are left suffocating or hiding under an intoxicating blanket of neon madness. Throughout, barely tangible figures and objects are helplessly entangled with smears of burnt, dried up bursts of oil (blood) laced with traces of dopamine and serotonin and rendered violently in rusty, incriminating earth tones. 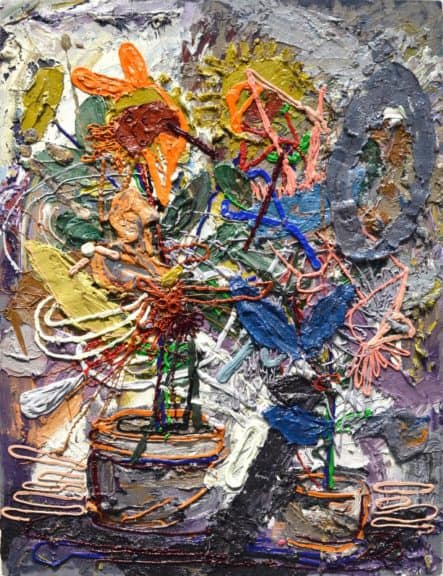 “The Philippines is getting more chaotic, but in a good way or a bad way?” Cruz asks, trailing off with a dash of skepticism. “I’m just trying to make a joke about this, to connect with the history of art, but also to make a new stage and new surface and to look at it from another perspective.” And what is that new perspective? Cruz just offers a playful smile. “I’m not saying the Philippines is as fucked up as when Luna painted his painting, but I can see the similarities.”

For the opening, Cruz invited his friends from Manila, the electro-glam-rock duo, Turbo Goth, comprised of the vampy, leather-painted, killer-healed vocalist Sarah Gaugler (check out her Chelsea tattoo shop, Snow Tattoo) and her multi-instrumentalist partner in crime, the lithe, wild-maned Paolo Peralta-who has moves like Jagger, swag like Keith and a killer Springsteen rock-slide. The Filipino rockers brought the same playful and chaotic energy so evidently sewn into Cruz’s thrilling, challenging, super-rich paintings. “I invited them to play here in NY because this is how we celebrate our openings in Manila. I wanted it to feel like home.” 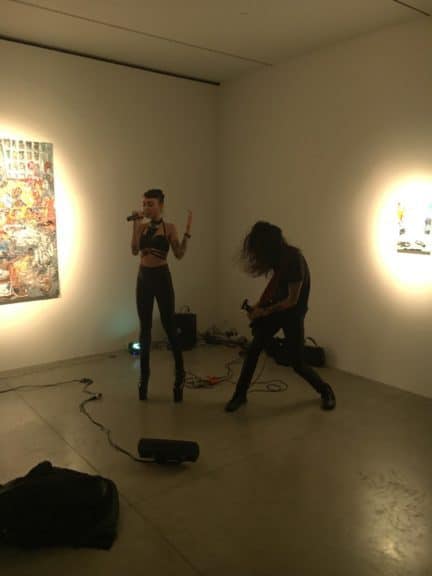