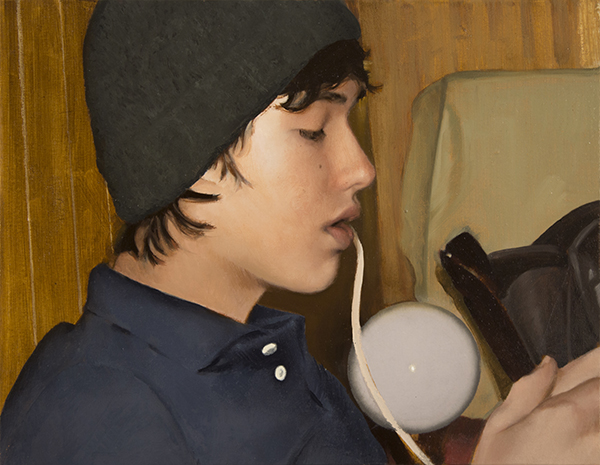 A stolen, wayward glance captivates those who gaze at Rugarli’s figures. Open lips evoke a languid expression, catching the viewer’s eye. These careful body language cues form the conduit of desire in the soft-focus, figurative paintings of Andrea Rugarli. Outlining his forms with the soft haze of obsession, and a soupçon of forbidden desire, figures in Rugarli’s works claim the contested space between portraiture and fantasy. The male body is positioned making passive gestures, submitting to the gaze of a friend – or lover. The ambiguity of this reciprocal relationship mirrors the subject’s own androgynous persona, crafting a hall of mirrors within which the viewer struggles to find firm footing. 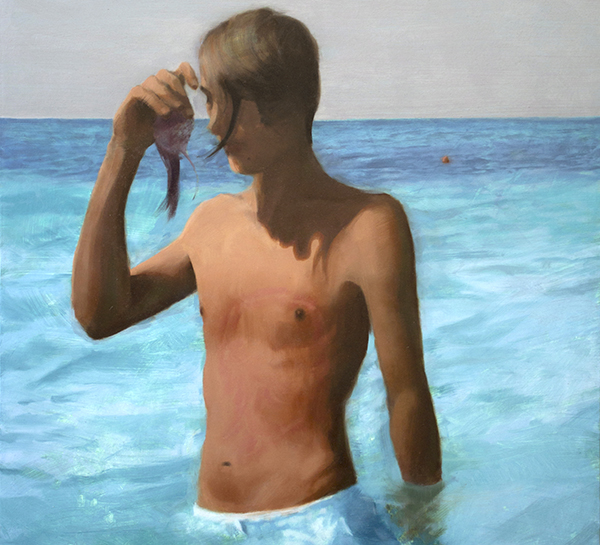 Firmly rooted In the haze of youth, the allure of Rugarli’s works resonates with those who have viewed Hockney portraits of his lovers: an intimate knowledge of the subject permeates the aura of the painting. Sexuality alone doesn’t dominate the painting; rather, Rugarli allows the spaces of familiarity artist shares with subject to belie the appeal of the young man depicted: a painter depicting his true muse.

The psychological weight of Rugarli’s approach collapses the outlines of his subject, infusing them with this hazy aura. Sharp lines are absent in Rugarli’s stylings, resulting in an overall visual effect that owes as much to Seurat as it does George Condo. Yet his tendency toward strongly lit scenes and the minute details of realism also allude to his artistic forbearers Caravaggio and Gentileschi.

Italian by birth and currently residing in New York City, Rugarli displays his RISD arts training as he delves deeper into his incisively styled realism. His artistic practice reveals a nuanced view of the figure unique to the artist: he creates his own version of reality similar to Nicole Eisenman’s carefully re-assembled yet immediately identifiable views of contemporary reality. Soft lighting produces an idealized figure, portending an air of mystery and foreshadowing. Rugarli’s paintings raise more questions than they provide answers: his masterful portrayal of quixotic, clandestine expressions imbues his subjects with a semblance of otherworldliness. His figures adapt a universal quality in spite of their clearly individual visage. 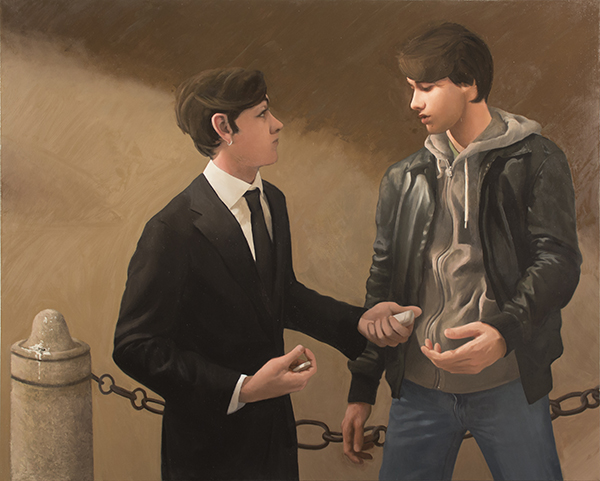 Interactions between subjects in Rugarli’s paintings remain similarly clouded in a haze of suspense. In Lo Scrocco, two figures interact on what is identifiable to the globetrotting viewer as an Italian street. Streetlights reflect on the stucco wall behind as the two gaze at one another, with the left figure passing an indistinguishable object on to the figure on the right side. Is it money? Or perhaps drugs? The two youths gaze at one another, with apparent chemistry lingering between. Reading like a Hitchcock film still committed to canvas, the electric air of the scene transcends the painting’s two dimensions. Rugarli notes of his works the importance of staging each scene to perfection for an audience, noting, “I have been thinking about my project throughout my years, and at times I was very clear about what I was doing…now I’m in a phase of mystery. The gaze is maybe even the subject,” Rugarli states.”Maybe it’s about that. Maybe because the paintings are so not about narrative, they are about the gaze, because the act in the painting is the act of the constant, surveilling gaze.”

Rugarli’s works reveal a new lease on the figure as a stage for desire, with a particular focus of affixing the gaze of the admirer on androgyny. The artist’s work is currently on view in a group exhibit in Manhattan at Van Der Plas gallery, and his works have been exhibited in prestigious international venues including the Biennale di Mantova (Italy), The Plaza Ballroom, New York (USA), Museo Diocesano Francesco Gonzaga, Palazzo Ca’ Zanardi (Italy), Space 776 Gallery (USA), Woods-Gerry Gallery (USA) and Gelman Gallery (USA). His works features in numerous private collections.