Diagrams for the Imagination will be on view at Gagosian uptown at 980 Madison Avenue and 77th street, from the 5th of March through the 13th of April. The seventeen room-scale canvases and six large format works on paper are the marvelous fruit of a profound collaborative engagement between Shusaku Arakawa and Madeline Gins that began when they met in 1962. The untimely deaths of Arakawa in 2010 and of Madeline in 2014 do not negate the premise of their second Guggenheim exhibition in 1997, “We Have Decided Not to Die.” The exceptional project of the Reversible Destiny Foundation continues today, and is preceded by their astonishing earthworks and buildings in Yoro Japan, Mitka Japan and East Hampton among others. In an interview with WIRED Magazine Gins and Arakawa explain their concept of architecture and Bioscleve House Life Expanding Villa in East Hampton. In New York city one can experience first hand Biotopological Scale-Juggling Escalator an installation at the Dover Market.

The works on view from between 1965 and 1984 were made after the start of the concept art classic, Mechanism of Meaning a similar, explosively daring and masterful body of work they began in 1963. Once the large scale interactive-intermedia works of Mechanism of Meaning began to be known Arakawa-Gins naturally became art stars of the first magnitude. They were one of the great art couples, a man and a woman who jointly produced fantastic and enlightening work. An inventive book version of the multi-dimensional Mechanism of Meaning was published in 1971 in a German edition by Verlag and 1979 by Harry N. Abrams. Clearly the brain-child of Arakawa, who did not speak English very well, and Gins who was on the New York poetry scene with John Giorno and Charles Bernstein. An article by Lucy Ives in the May 2018 issue of FREIZE magazine titled, “Visionary Cybernetics” provides detailed information on Gins’ work as a poet and thinker in the context of Arakawa and Madeline Gins: Eternal Gradient an exhibition at Columbia University’s Arthur Ross Architecture Gallery in 2018. It is a pleasure to discover Gins verbal experimentation; playful and sometimes demanding work with language that dove into mysteries of physics, the universe and what it means and how exactly it feels, to be human.

The large scale mixed media paintings are magnetic fields often using arrows diagrammatically. They are aesthetically and viscerally compelling in part because of their resonating mixture of masterful a la prima execution, incorporation of accident, and engaging thought experiments. Many of the texts are rendered in an iconic stencil font, sometimes the texts are reversed and inverted but still readable; clearly the voice of Gins is there. The paintings and works on paper appeal to a viewer/participant’s mind and aesthetic; a connection to Duchamp could not be more evident. The painting’s force comes from the interpenetration of extraordinary skill and mastery in Arakawa’s execution, and their shared foundational thought experiments and Gins’ poetics.

These wonderfully smart paintings were made to include and engage; their large scale and use of language and signs envelop viewer/participants. The ARAKAWA-GINS legacy points the way for 21st Century progress and hope for humanity and a future on planet earth. Don’t miss this show, and visit the Reversible Destiny Foundation to learn more about their revolutionary and important work.

The forthcoming catalog from Gagosian Gallery is to feature an essay by Charles W. Haxthausen whose introduction to the exhibition fails to acknowledge the fundamental contribution of Gins to the work on view. His text suggests that these works were entirely conceived and executed by Arakawa alone.

David Colman on the Arakawa: Six Paintings exhibition at Gagosian 24th street in 2017 also omits mention of the primal contributions of Gins to the cerebral, verbally refined, reflective and ambitious language found in the canvases.

Mary Ann Caws’ fine text Losing Nothing, in the current Gagosian Quarterly, is surprising… unfortunately she diminishes the foundational and original presence of Madeline Gins’ mind, thought and ebullient character in the couple’s oeuvre. 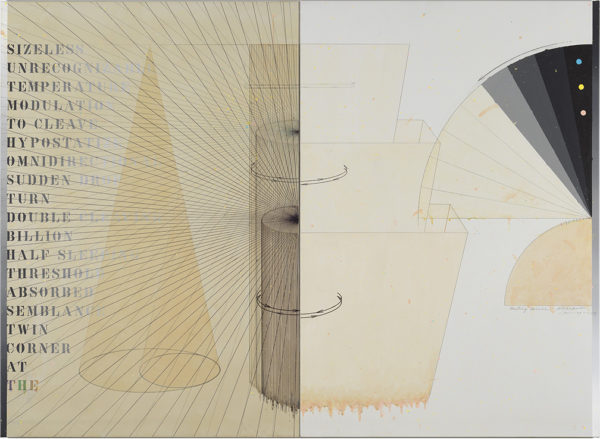 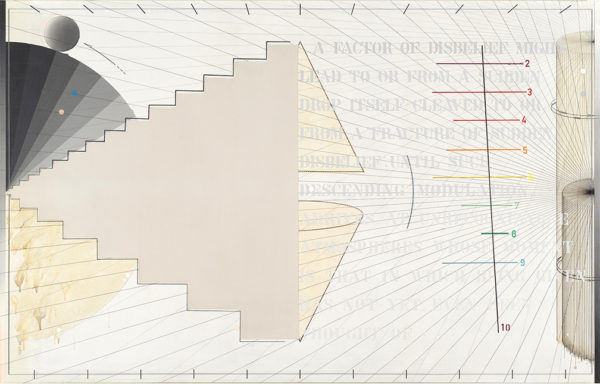