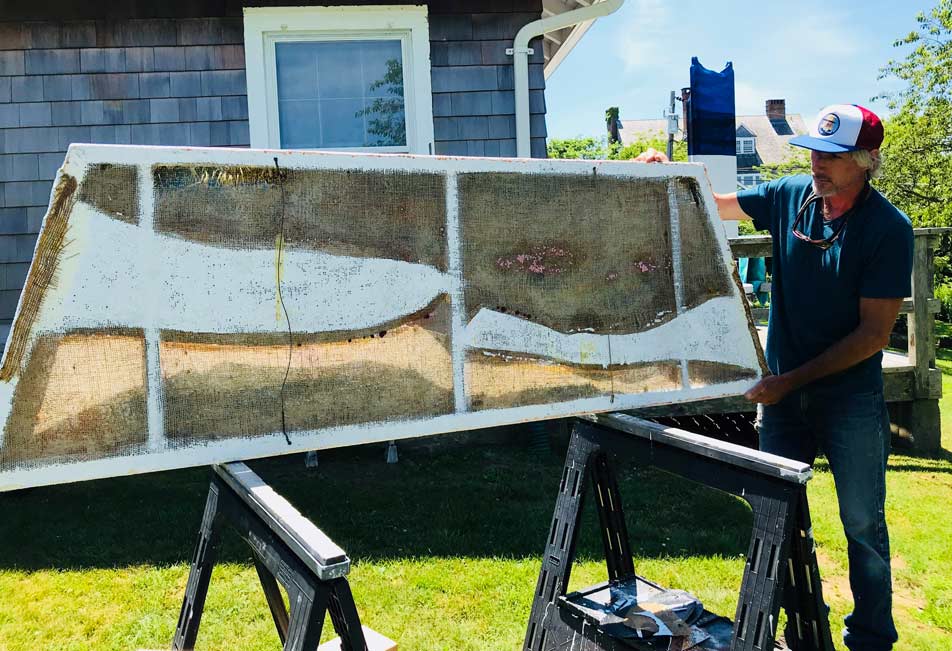 Artist Chuck Manion is much like the architect protagonist Howard Roark in Ayn Rand’s The Fountainhead: fiercely independent, autonomous thinking, a man of action. And like Howard Roark, fame and fortune are not a driving force governing the creative process or life trajectory. The integrity of their art is. Mr. Manion is concerned as much about the proper hanging for his polygonal wall objects stretched with mosquito-netting or burlap as he is of the found objects and other accouterments that go into it. Mere stretcher bars stretched simply with ordinary cotton duck these are not. Chuck is an artist’s-artist who immerses his mind, body, and soul into his craft. Ayn Rand, however, would take it a step further and declare Chuck as a man of free will —the theory that individuals have the power to control their lot in life, their destiny, by the choices they make regardless of upbringing, socio/economic class, or adversity. Mr. Manion has stayed true to his values, his family, and his convictions thoroughly, steadfastly, even though God (if we can believe in God for one moment here) has leveled Parkinson’s against him. 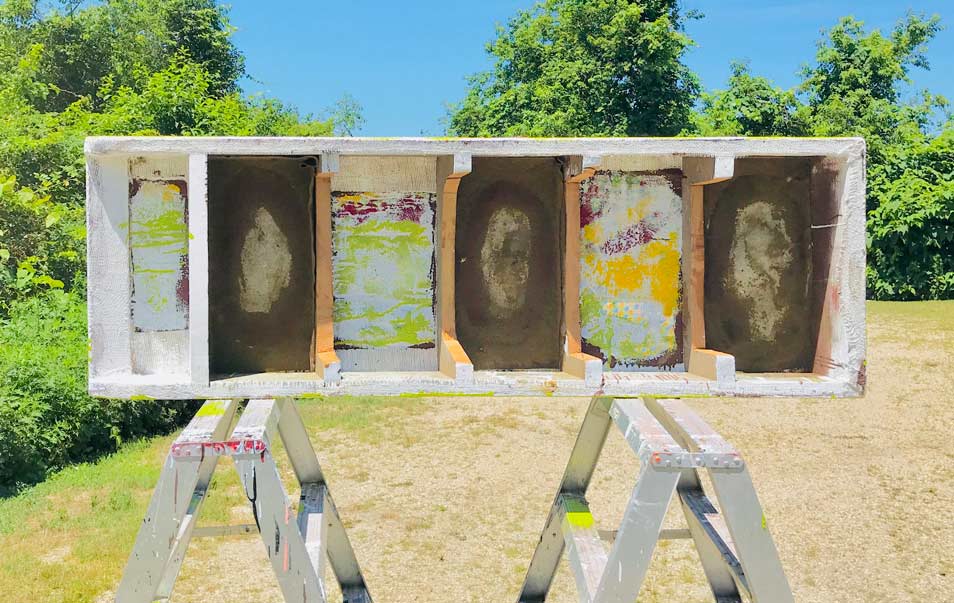 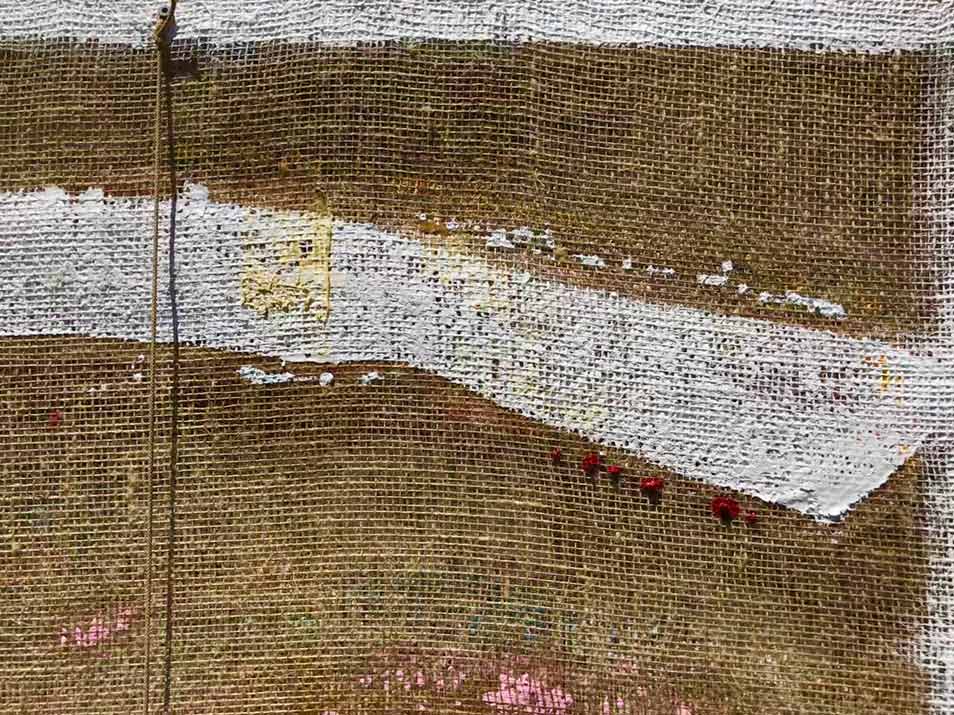 Detail of a Chuck Manion painting. Note how the paint is pushed through the burlap like a sieve. 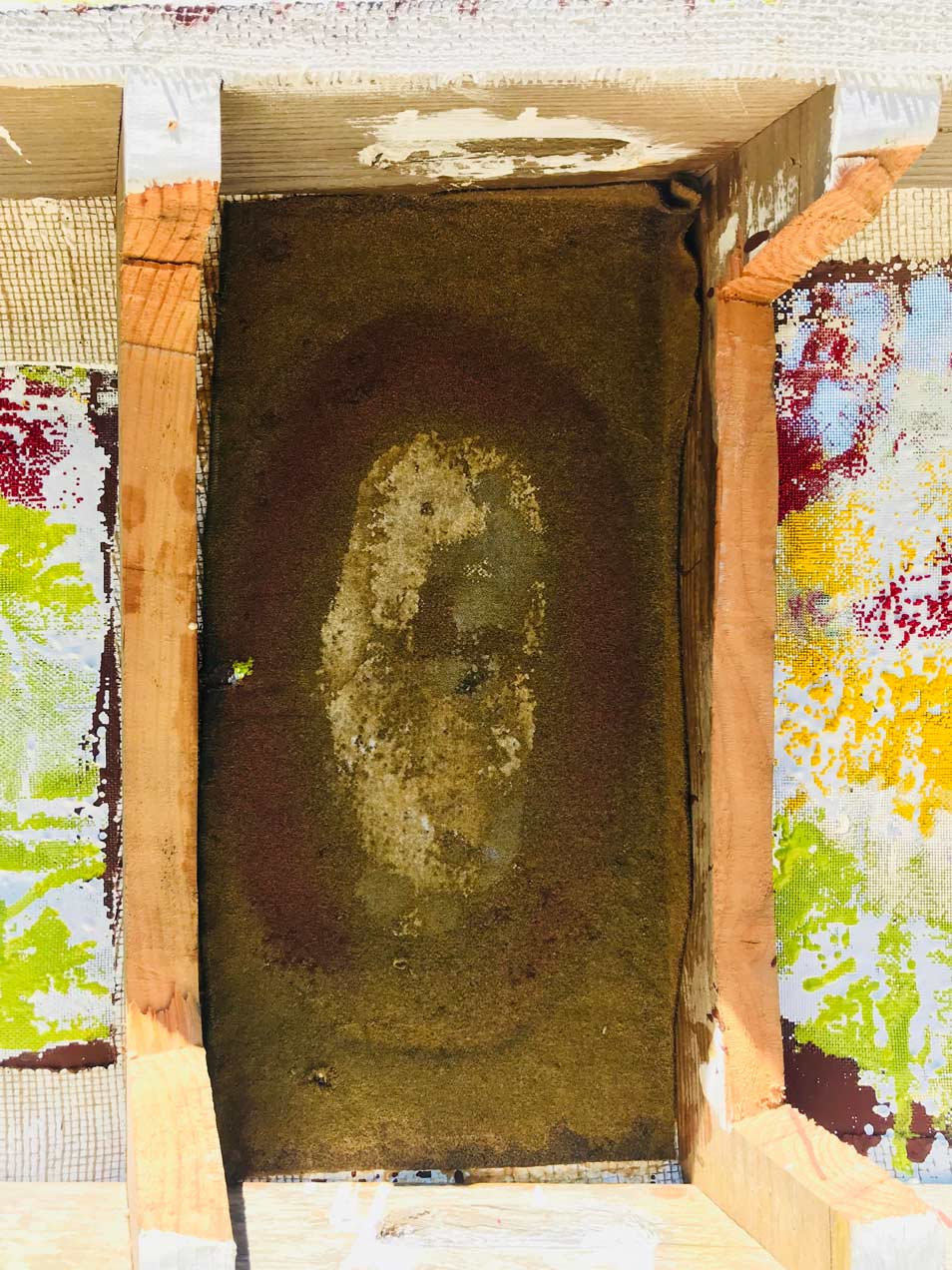 Detail to _A Hiding Place for Joseph Beuys_ by Chuck Manion.

Each day brings new challenges, a new awareness of his condition. It is also, inspiringly, transitioning him into becoming a better and greater artist. He has become more thoughtful about his work, not less so. And, most importantly, he is taking determined action to those thoughts just as a man possessed of free will would, creating—according to this writer— his best body of work to date. No longer do his abstract mark-makings appear as an afterthought. Painterly notations sing conscientiously, deliberately. Masterful strokes applied with purpose and renewed intensity. His sieve-like process of forcing oil pigments through burlap or netting that once seemed potluck or second-guessed now come across as trademarked, owned and patented by Chuck Manion. We are witnessing a moment in time when an artist is truly coming into his own. And I’ll make a million dollar bet with anyone that fame and fortune will follow. 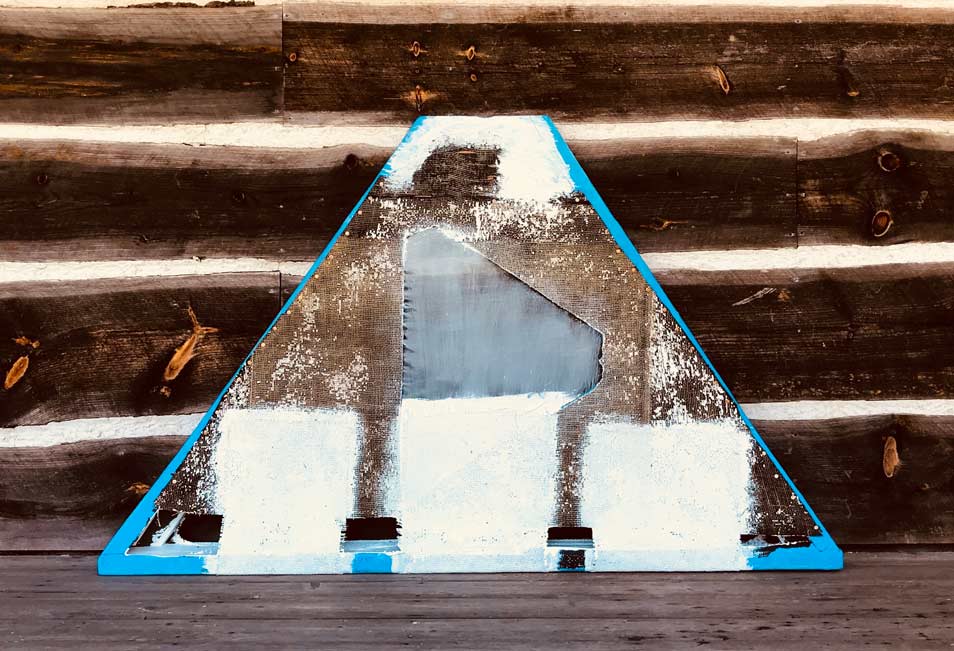 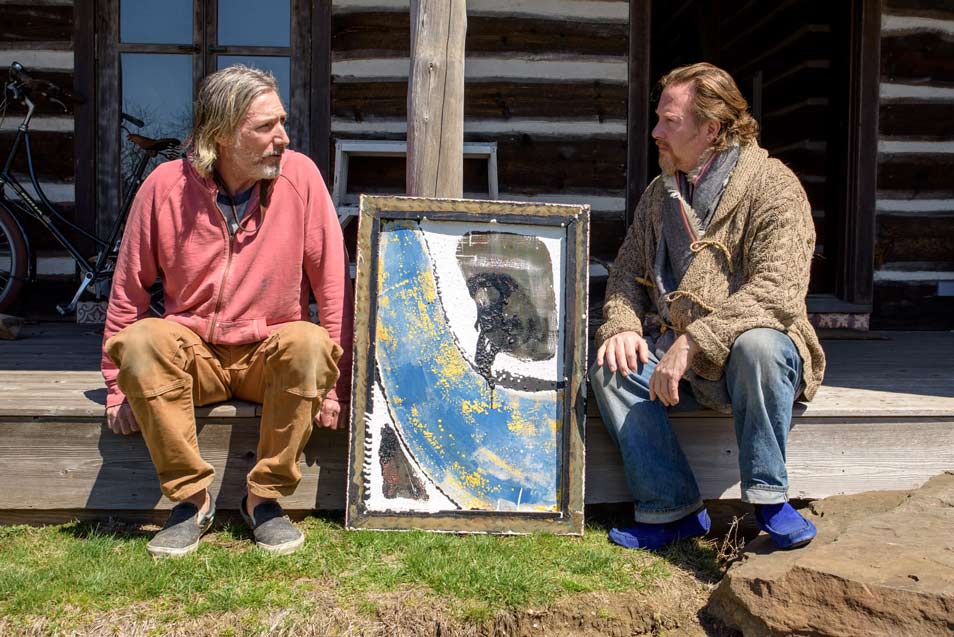 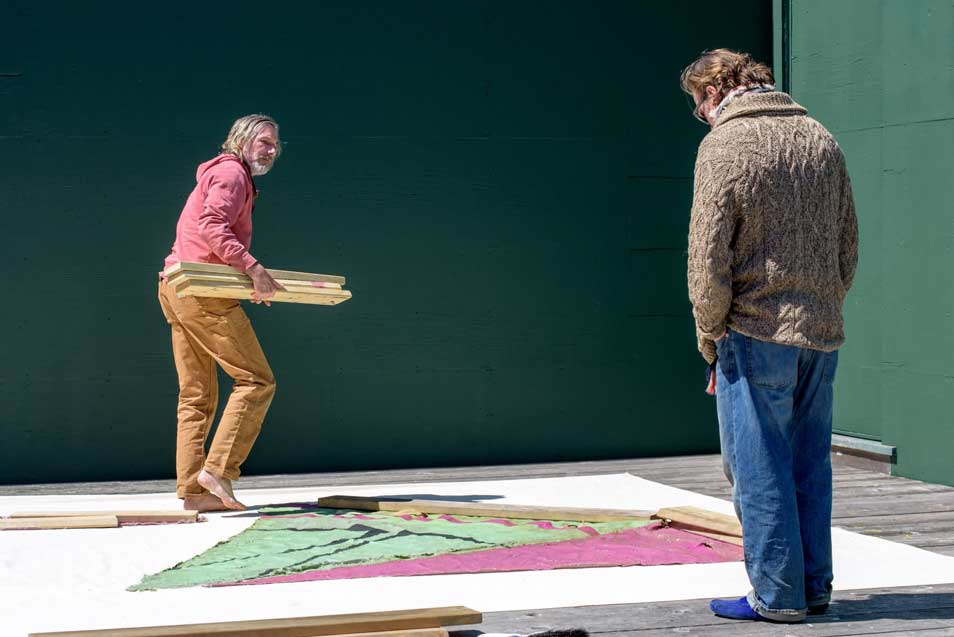 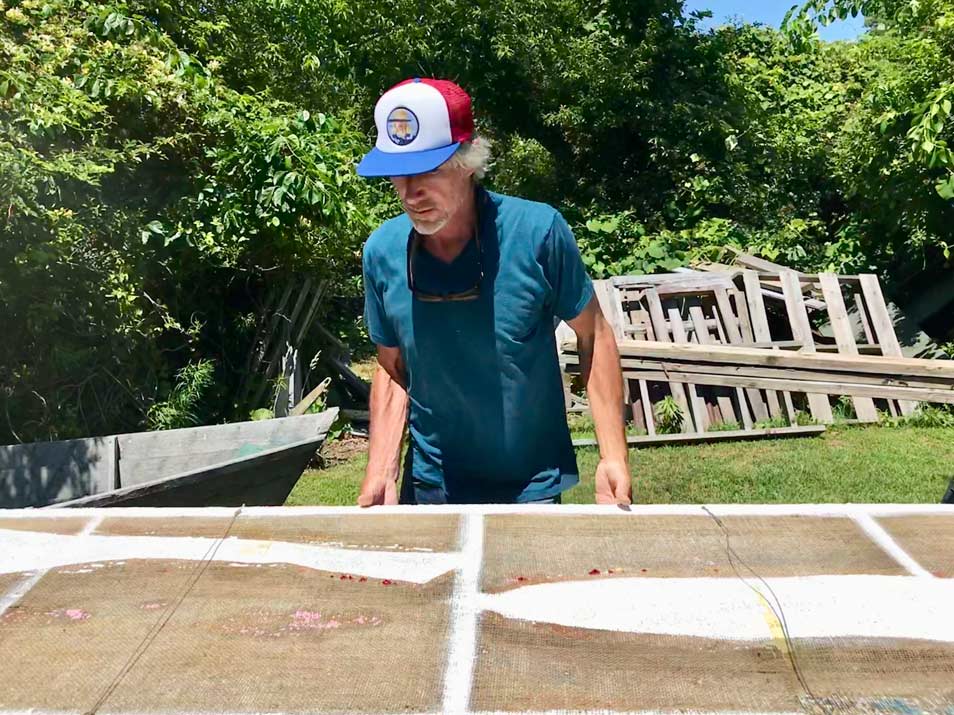 Weather permitting, Chuck Manion works outside his Montauk home most of the time.