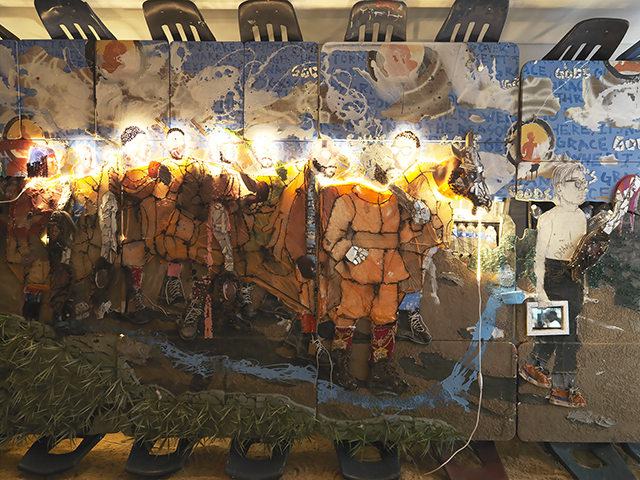 “Basically, I’m an artist, so I make to figure out things,” claims the mixed-media artist Aaron Fowler less than three hours before his show, Donkey Nights (June 27 – August 10, 2018), is set to open on Bowery. Fowler expresses this notion through his enormous, oceanic eyes; sensitive two-way mirrors which convey a completely justifiable exhaustion and a blissful meta-fugue state, meaning he seems at once both entirely present, almost Zen-like, and yet somewhere else entirely. This makes sense, as Fowler’s creations, all highly personal works; seem to be everywhere right now. 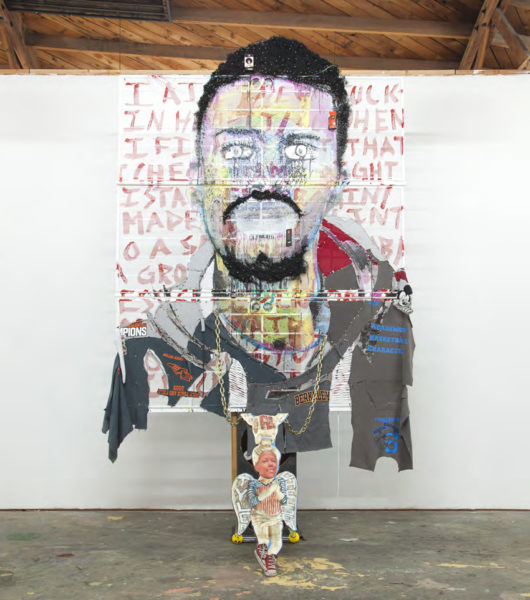 Right next to Salon 94, the presently super-prolific artist (b. 1988, St. Louis, MO) has a solo show, Aaron Fowler: Bigger Than Me, at the New Museum (May 2-August 19, 2018). Directly across town, at David Totah’s excellent, highly visceral yet meta-physical art ashram on Stanton Street, TOTAH, Fowler is showing a solo exhibition a year and a half in the making, Donkey Days (June 23rd – August 26, 2018). Fowler also currently has two large-scale works in the Hammer Museum’s biennial exhibition, Made in L.A., 2018.

In short, Fowler is more than having a moment, he’s crushing his moment, and based on his talent, self-awareness, and confounding level of compassion (we’ll get to that), this moment should expand into an impressive career and essential oeuvre.

“He [Fowler] deconstructs formal painting and intuitively assembles mundane objects, resulting in a soulful personal narrative that goes straight to my heart,” says David Totah, a pleasantly shrewd, modern day, oft-irreverent, contemporary art Zanoni, who brought in a truckload of over 7.5 tons of sand (at Fowler’s request) for the museum-quality Donkey Days, that happily buried his otherwise pristine LES floor. “Aaron gives birth to works that radiate with his luminous soul and personal aura.” 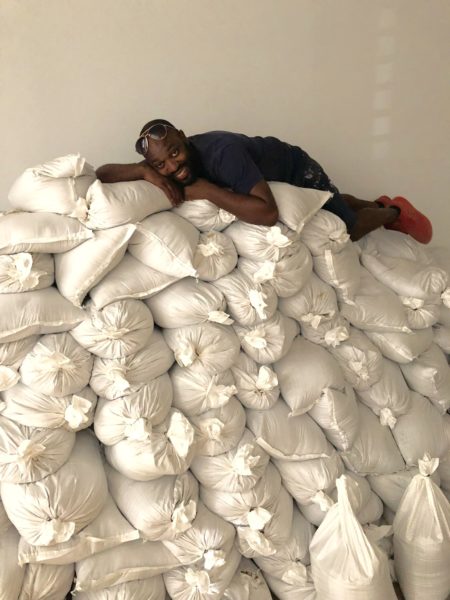 It’s foolish to argue with Totah about anything really, but certainly this statement. While speaking with Fowler in the subterranean showroom at Salon 94, as massive industrial chains banged and clanked about during the install, the artist was backed by what appeared to be a looming, 12’ self-portrait, A1, 2017, creating a layered, raw, double barreled mixed-media shotgun blast of almost uncomfortably emotive eyes.

“It’s a lot,” admits Fowler, before a fatigued chuckle breaks through his easy smile. He’s talking about all the work that goes into all these great shows, of course, but he’s also talking about the truckload of embedded emotion, which is equally as taxing. So what or where’s the wellspring? Also, what’s up with all the donkey stuff? “I came up with Donkey Days for David Totah’s show,” says Fowler. “Basically, it’s me painting myself as a donkey…It’s a long story.” 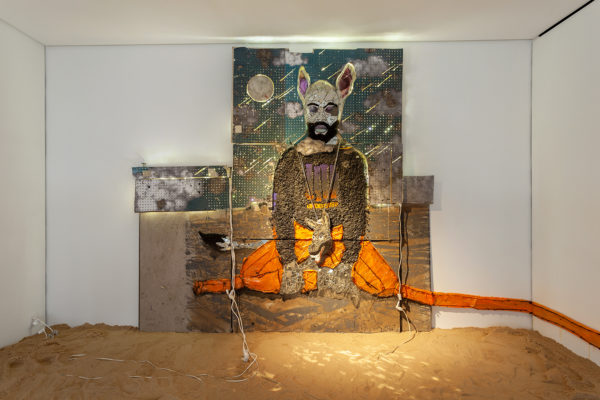 “Basically [Fowler begins a lot of not-so-basic musings with this word], I thought I had a daughter about 3 years ago,” he says nonchalantly. What do you mean, “thought?” is the immediate retort that comes to mind. “An old girlfriend gave me a call, said the baby might be mine. She’s in St. Louis. That’s where I’m from. I was in New York at the time. I had a studio in L.A., so I was going back and forth. It was hard to figure out based on timing and distance, but this year I moved back to St. Louis to figure this out.”

He moved back. Before he found out. To skyrocket straight to the Maury reveal, after taking a DNA test, Fowler discovered he is not the father. “I thought, if she is mine, I want to be in her life,” he says. “I used to get pictures from my own mother, of her, Logan, on Facebook. She looks a lot like me and has similar mannerisms. I would see her at spelling bees, fashion shows. I was curious. I wanted to get to know her. So I did.”

Fowler, throughout our all too brief conversation, kept reiterating his need to create art to work through difficult life circumstances. “I wasn’t sure if it was true or not and I couldn’t stop thinking about it,” he says. “I couldn’t get her out of my mind. The first of roughly 6 pieces, I made for the Hammer. It’s me carrying her out of St. Louis as a pioneer.” In the work, a creative first, he has the head of a donkey.

“I realized, in the photos I was seeing, every time something good happens to her, there was a donkey involved, always, somewhere in the background,” he says. The donkey was Logan’s school mascot. “How would I approach her? How could I relate to her? I thought it would be funny if I were this donkey. Hypothetically.” 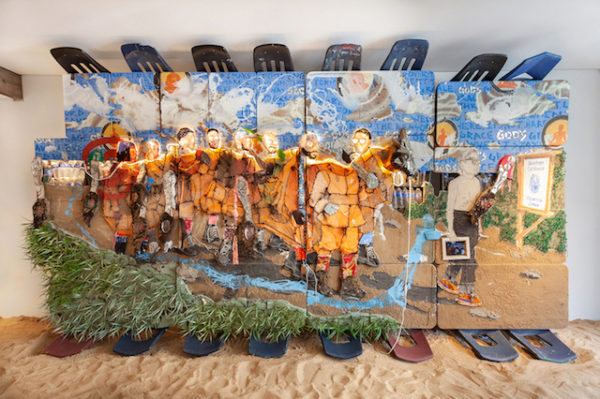 All humor aside, it was an extended moment of deep reflection for Fowler. At the recommendation of his friend Byron Kim, he embarked on a silent mediation retreat at Vipassana, now an international organization with locations around the world. “I was dealing with a lot of trauma,” says Fowler. “ It was about being present in life. We learn that we all have a lot of trauma. When we don’t deal with trauma, we bury them and they pile up.”

Fowler was transported to his seventh grade self, back when he first embraced art (drawing specifically) as a means to cope with his young cousin’s death (he died in a car accident). He explored the nature of growing up in downtown St. Louis, which was intensely segregated from the almost exclusively white suburbs. “There was a lot of poverty, many fights, but also a lot of love,” he recalls. “Very black and white, violence all over the place, friends going to prison for life-getting killed.” He also empathized deeply with his own mother, who gave birth to him at 14. “She was a baby. I feel like I have the greatest mom.” He discovered that Logan, whether she was his daughter or not, had become a priority in his life. 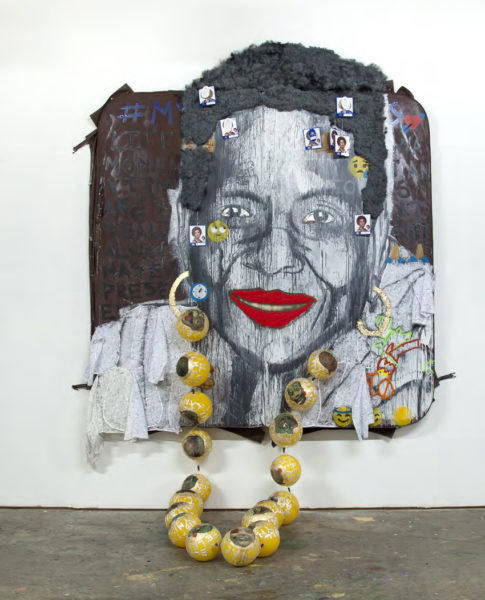 There’s a deeper metaphor for what Logan represents, for men everywhere, and yes, perhaps more intensely for African American men, still enveloped in a prevailing cultural stigma of fatherly absenteeism. Fowler resolved to move to St. Louis, not to find closure (“I still haven’t found it.”), but to establish a real connection. Not before meeting David Totah, a sort of playful, gravitational dark star of artistic cosmic connections.

It’s rare to speak to a Yale MFA grad that can trace his art journey all the way back to a seventh grade tragedy. Fowler’s skills and their connection to his open-wound sensitivity were noticed and he was soon put on the art path with great care and yes, success. 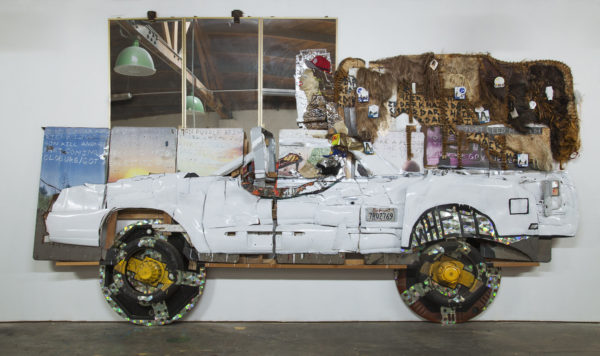 Fowler soon found himself creating a portfolio in an advanced art classed at Parkway West High School in Baldwin, Missouri. “I was super-excited about that,” Fowler says, his sentences often trailing up in pitch at the end, like every statement is a question. Fowler remembers traveling to New York on a class trip and passing through Christo and Jeanne-Claude’s iconic Gates. He spent the next two years incubating at St. Louis Community College at Florissant Valley. “I met some amazing people, like Professor Eric Shultis. He saw something in me.” Fowler was still catching the bus to school and working a full-time job. Mostly for Fowler’s benefit, Shultis built studios in the classroom.

“He also told me about Pennsylvania Academy of the Fine Arts,” he says. “I ended up in Philadelphia for the next 2 ½ years. It was a traditional school, tight with drawing and painting.” Fowler then found his way into the six-week, Yale Norfolk summer program. “It felt like the middle of nowhere, but Norfolk changed my whole process. For the first time, all I had to worry about was making art.”

After graduating from Yale in 2014, Fowler landed his first solo exhibition of what could be called assemblage-paintings at Diane Rosenstein in L.A. This was 2015’s Blessings on Blessings. Not long after this, a young girl named Logan crashed into his life. “I got to know her,” he says. “We hung out a couple times. I got excited about being a father and when I found out I wasn’t; it was almost like a death. I changed my whole life around to be there (St. Louis). I was kind of happy that I was free I guess, but I also met somebody great, so it was very hard.” 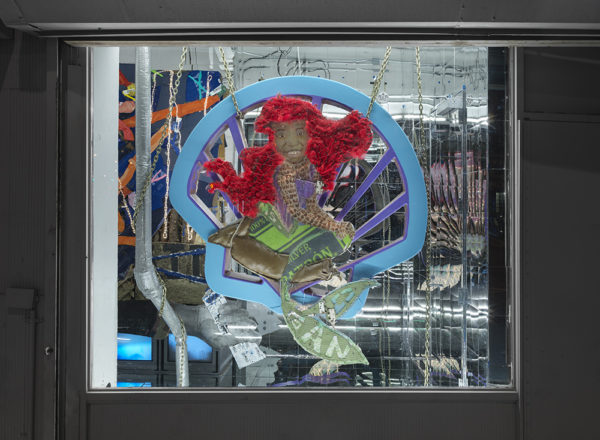 Fowler plans on being in Logan’s life, as a mentor or perhaps as a godfather. In any case, she’ll live on, in life certainly, but also in his work, which is already cracking into major institutions. Logan’s been seen, celebrated and immortalized and with zero obligation or legally mandated responsibility hanging over Fowler’s head. This is what empathy feels like. This is what art looks like. This is mentioned to Fowler, just before he’s forced to return back to his latest install, as his own father begins walking down Salon 94’s stairs to continue lending a helping hand. Aaron smiles and nods with an almost sleepy sense of peaceful, calming humility, but not without a faint trace of lingering disappointment.