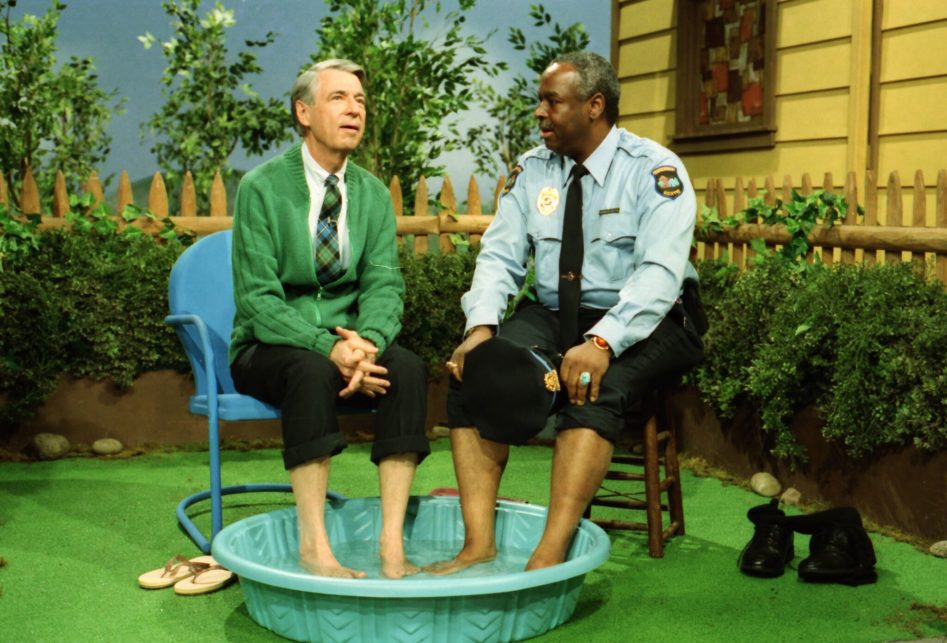 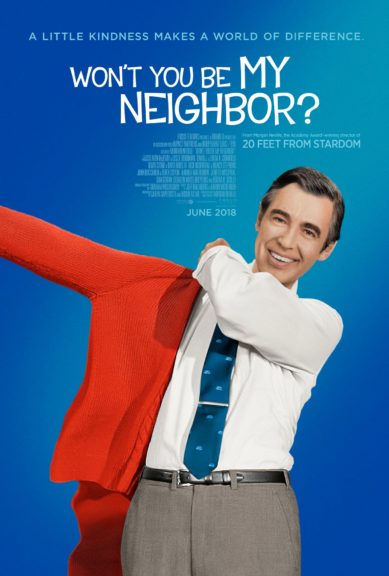 I can’t do it. I just can’t bring myself to see Won’t You Be My Neighbor. the documentary about Fred Rogers and his children’s show, “Mister Rogers’, Neighborhood.” The film is totally legit. It has Academy Award®-winning filmmaker Morgan Neville (20 Feet from Stardom) directing a documentary about a subject audiences think they know everything about but evidently, do not. The theme song of the television show is as clear in my head today decades after I last kneeled on the avocado-green 1970s shag rug, the requisite minimum four feet away from the television in our family room. “It’s a beautiful day in this neighborhood, A beautiful day for a neighbor, Would you be mine?
Could you be mine? Please, won’t you be my neighbor?” Of course, I had to go and check and somehow there was a second verse I had forgotten.  “It’s a neighborly day in this beauty wood, A neighborly day for a beauty, Would you be mine? Could you be mine? I have always wanted to have a neighbor just like you, I’ve always wanted to live in a neighborhood with you. So let’s make the most of this beautiful day, Since we’re together, we might as well say, Would you be mine? Could you be mine? Won’t you be my neighbor? Won’t you please, Won’t you please, Please won’t you be my neighbor?” In Mr. Rogers walked, and said, “hi, neighbor” with a genuine smile on his gentle face. The jacket was removed, carefully hung up in the closet and replaced by one of the now famous zip-up cardigans. (His mother knit them all.) One is now part of the permanent collection of the Smithsonian.

He sat on a bench and changed from his outdoor shoes to his indoor sneakers. He was reliable, predictable, stable. If I am not mistaken, he would check on his fish tank and feed his fish. Mr. Rogers broke all the conventions of good television. He looked directly at the camera. He spoke slowly. I’m pretty sure there was only one camera though I haven’t checked. The production values in his Pittsburgh studio weren’t dynamite but the show, in my opinion, was. “F.R.I.E.N.D. special, you are my friend, you are special to me,” resonated in my head throughout my childhood and rings as loudly now as it did then.Mr. Rogers took me to the land of makebelieve and made it my own. I think the gestalt of what Fred Rogers was attempting to impart to children was that it was not just okay but mandatory to be a child. Adults don’t always have the answer to everything and not everyone behaves graciously (I’m coming for you, Lady Elaine Fairchild). King Friday was a benign blowhard. I’ve met more than a few people in my life who have characteristics that I felt prepared to deal with because Mr. Rogers thought it was important to dignify the absurdity of human behavior without lampooning it. Probably the characters I related to the most were the two cats Daniel Tiger and Henrietta Pussycat. Daniel was shy and misunderstood. I got him completely. As a parent, I’ve read nonsense filled articles about how Mr. Rogers made Gen-X feel entitled and special like we (and subsequently our children) deserve a trophy for just showing up. I think he received a few trophies for bringing it in the form of Emmy Awards (four and a Lifetime Achievement Award). So here’s the thing: I’m an emotional coward. I actively avoid things that I’m convinced are going to make me nostalgic. 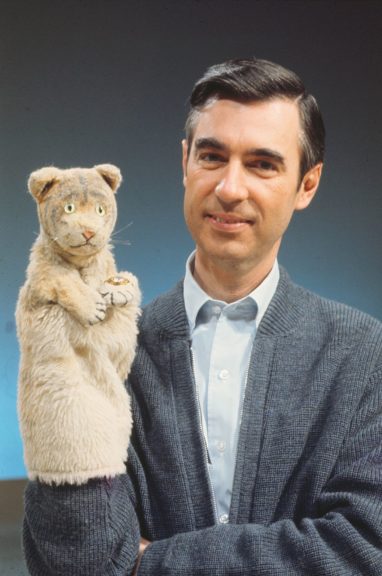 FRED ROGERS WITH DANIEL TIGER FROM HIS SHOW MR. ROGERS NEIGHBORHOOD IN THE FILM, WON’T YOU BE MY NEIGHBOR?, A FOCUS FEATURES RELEASE. CREDIT: THE FRED ROGERS COMPANY

Somewhere in storage is a stuffed animal hand puppet that looks something like Daniel Tiger. Though most things from my childhood have disappeared, I still have a few things and this ragged, blue-eyed hand puppet has followed me around for my entire life.  I thought the name Henrietta Pussycat was the most beautiful name I had ever heard. Her favorite color was black and she got horribly jealous when anyone got special attention besides her. Guilty. As for the attention? I’ll leave that one up to those who know me.

Mr. Rogers existed at a time in my life when I had two living parents but before I had a little brother, two bunny rabbits (Thing One and Thing Two), a swing set, a best friend and a color television. When I was three-and-a-half, we relocated to California and Mr. Rogers moved with us. He had a reassuring face, his black hair was always tidy and his smile was warm. I don’t think I want to break the emotional fourth wall of my childhood. I want the memories to be just as they are and not revised and reimagined. If I see the film, I will see what I remembered through the eyes of a grown-up. Whether real or imagined, what is in my head will be revised, edited through the neuropathways of an adult’s brain and will no longer be memories. I cannot recall seeing Mr. Rogers in black and white though it seems inconceivable that we always had a color TV. There is no one left alive to ask. My brother is younger than me and won’t remember.

Mr. Rogers is responsible for Children’s Television programming on public television. Love it or hate it, there are phrases that I’ll never forget, “Correct as usual, King Friday.” The deliberate slowness is what I craved. Mr. Rogers was never in a bad mood, that doesn’t mean he didn’t get sad; never out of control or frenetic he provided the original safe-space. Rogers’ capacity to gently yet clearly introduce children to the concept of divorce without confusion and trauma? He understood that once a child knows something it cannot be unknown. I think I played with kids who looked different than me because Mr. Rogers sat in a kiddy pool with someone who looked different than him. Make-believe was a constant but never the guise of magic. People who I respect have loved the film. If you want to learn more about a man who saw something that he thought was lacking (programming in Children’s Television) and did something about it and then fought for it whilst remaining himself, you should see it. I don’t need to unknow that part of my childhood. At the end of each episode, Mr. Rogers’ sang, “I’ll be back when the day is new, and I’ll have more ideas for you, and  you’ll have things you want to talk about, I will too.” I’m not even going to check that one. I think I’ll leave it alone.