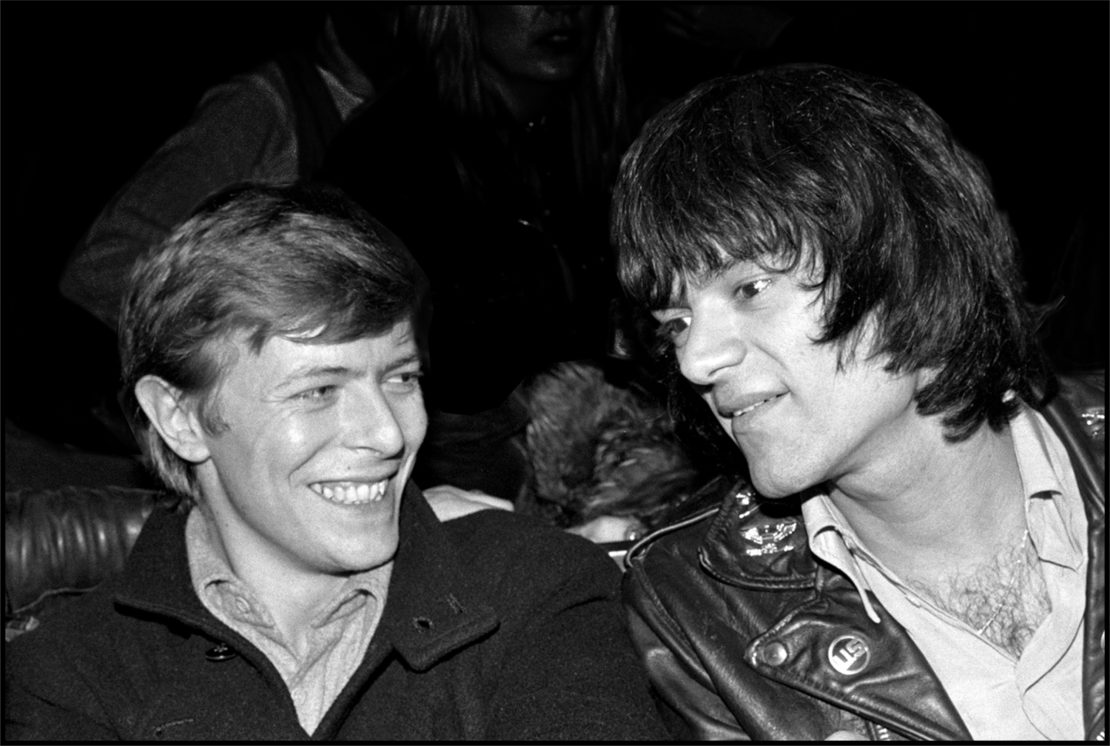 “There was one of the two bathrooms upstairs that was the larger of the two, I call them men’s and ladies but they were really unisex, one just had a larger mirror. Did people shoot up in there? Yes. Did people do coke in there? Sure. Were quaaludes sold in there? Definitely. The other bathroom, if I was in there, and I didn’t want to open it, because maybe I was getting high and maybe there were two other people in there having sex, standing up fucking in a corner, or someone getting a blow job, I mean, was that a regular occurrence there? Mainly no, it was mostly drugs in the bathroom. Was there sex in the basement, yes, if you were able to get into the basement. Did I have sex with people in the basement? Yes, sometimes, but it’s a different kind of sex back then, in your twenties, you could pull down your pants and have sex, and be back on the door in 10 minutes.” 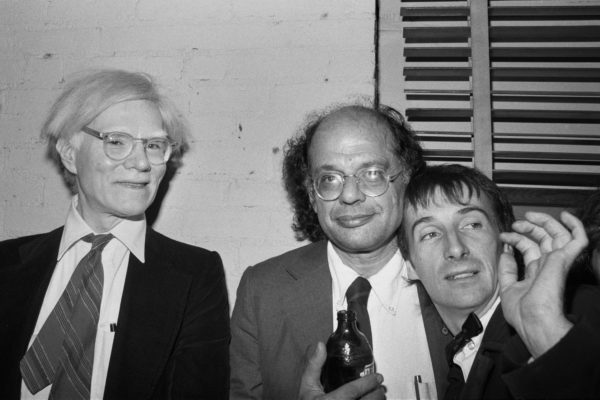 The saga of the notorious Mudd Club, a fractured fairy tale whose yarn is spun with operatic filament by legendary doorman Richard Boch, starts underground and ends in glorious fame for some, ignominy for many. In its brief heyday, from 1978-1983, it offered an alternative to the shriek CBGB, and the sleek Studio 54, a haven for visionaries like future legends Jean-Michel Basquiat and Keith Haring, as well as never-above-street-level punks like Cheetah Chrome and Stiv Bators of the Dead Boys. 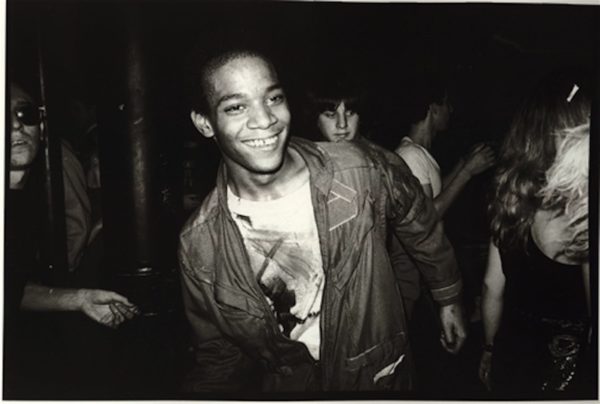 In between performances from Talking Heads, Blondie, Frank Zappa, and Basquiat’s band Gray, and the frequent or near-nightly appearances by downtown heavyweights like Andy Warhol,  Lou Reed, and David Bowie, the Mudd Club, as illustrated in Boch’s insightful memoir, was not just the center of downtown NYC culture, it was the center of the universe. The cover photo of Boch’s memoir shows Bowie, Joey Ramone, and Dee Dee Ramone, in a late ‘70’s/early ‘80’s haze. “David Bowie was a regular, when he was in town, he was there every night,” said Boch. “If David Bowie had a break, and he was in town for two months, he was at the Mudd Club five out of seven nights a week. The Ramones were touring like 340 nights a year, but on their nights off, whether it was Joey, Johnny, Markie, or sometimes Dee Dee, they were there, along with [famed manger] Danny Fields.” 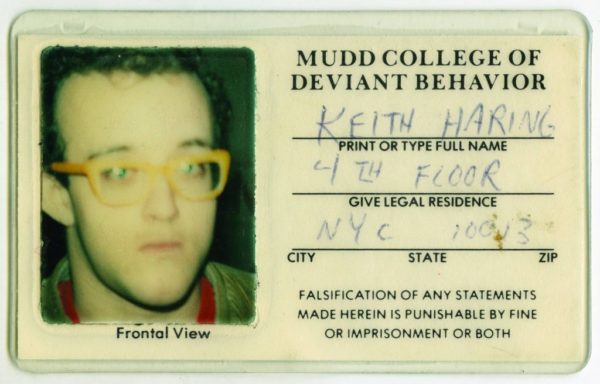 As with Lou Reed, The Velvet Underground’s John Cale “was an every night guy, ‘cause he was always in town,” said Boch. “Nico very regularly, that’s another story to which I devoted a couple of pages in the book. This iconic figure not only based on the fact that she was the co-lead vocalist on the first Velvet Underground album, then put out a few brilliant solo albums, but Nico was sort of going through a rough patch, and that’s being diplomatic, but the bottom line was, she was still Nico.” In the book he describes Nico: “She was chaos, company and entertainment all rolled into one, whether spooking people at the bar or closing one of her sets with a rousing harmonium-accompanied version of Deutschland, Deutschland, über alles.” Other notable and influential players like “No Wave” musician Arto Lindsay of DNA, Lenny Kaye of The Patti Smith Band, and John Lurie, the musician, composer

and actor, could be seen at the club on most nights. 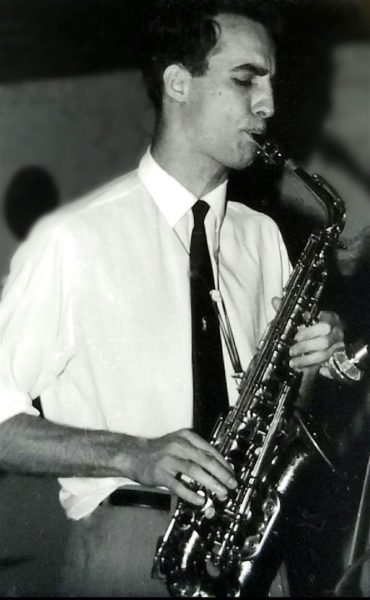 Another regular was daredevil indie filmmaker, Amos Poe, director of the paradigmatic film, The Blank Generation. He recalls his relationship with the Mudd Club, and its proprietor, Steve Mass. “I associate CBGB’s and Max’s Kansas City with music, drugs and sex,” said Poe, “while The Mudd Club was sex, drugs and rock n’ roll. It was an event. It had a lot to do with Steve Mass in his Ringling Bros. phase. I met Steve the fall of ’77, we’d started a film company called Mudd Films (based on a review of one of my early films, “it looks like it was shot through a mud covered lens…”). Steve and I only made one film together (with Peter Beard). Steve was basically an alcoholic at the time, so I suggested he’d be better off opening up a bar than try and make movies. A few months later, the Molotov Cocktail Lounge [Mudd Club’s original handle] took shape. The Mudd Club became quickly the measure of cool. It was an opium den for the unaffected.” 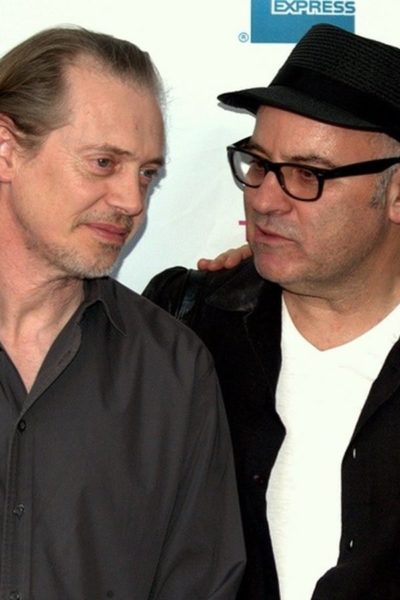 And then there was Michael Holman, member of the band, Gray, along with actor Vincent Gallo and Basquiat. “The Mudd Club was highly social,” said Holman. “So many people met their friends and artistic compatriots and collaborators at the Mudd Club, while we danced all night, while we drank and talked about ourselves and told stories upstairs in the VIP room. It was really a social hangout, and it was a catalyst for what would become the downtown early New York art, fashion, film, and music scene. A place where regulars like myself, Tina L’Hotsky, and Debbie Harry, and other regulars who without much worry knew that they could convince owner Steve Mass to allow them to put on a special event, or to suggest some kind of interesting, weird, teen party. We had all these amazing theme parties like the dead rock star party or the combat party, or the one I created, the soul party. There were a lot of different scene parties that we would put on that were really just meant to entertain ourselves. And there was the art gallery. It was just a gathering place like no other in New York.” 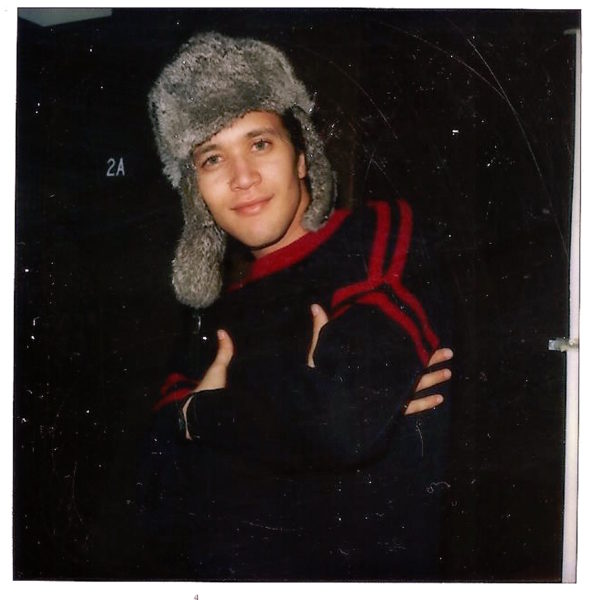 Writing this book was not a project that Richard Boch had ever envisioned. “The book took about five and a half years to write,” said Boch, “and it’s basically what happened during those 22 months of me working the door, both outside on the street and inside the club, you know, highlighting performances and parties and just crazy nights, busy nights, slow nights.” Speaking to a friend, she convinced him that he should be the one to write the book, even though his background is as a visual artist. “Well, I used to say, if you’ve been standing here for more than 10 minutes, you’re not getting in,” said Boch. “And, she laughed, and I laughed, and she says, well, that’s the first line of your book. Now start writing! So I did, and it remained the first line of the book through all its drafts, and it remains the first line of the book in the published version.” Aside from stories of the Mudd Club, the book traces the personal journey of Boch as well. “It was a time that was still kind of bad in New York City,” he said. “Anything goes, I mean, the drinking age in New York was 18. So there were a lot of young people there, it was on the cusp of two decades, the ‘70’s into the ‘80’s, Carter into Reagan. New York City itself was still kind of the Wild West and ungentrified, largely. And it was pre-AIDS. So we were still sort of acting out as children of the revolution, if that makes sense. I mean, we were more open to what looked good at, you know, three or four or five or six in the morning. We weren’t scared.” 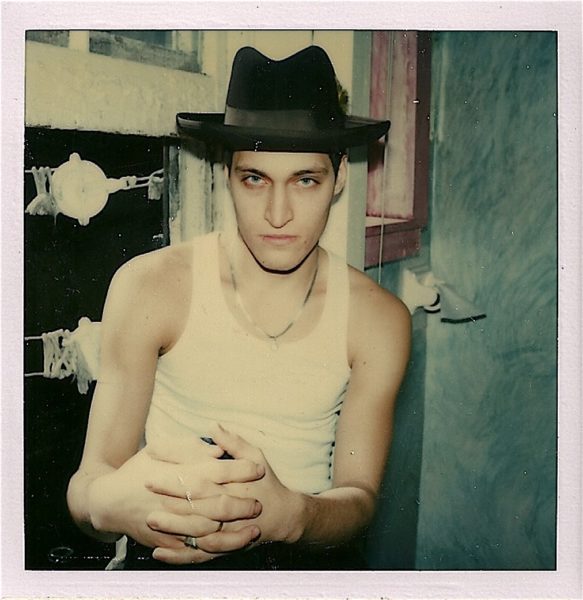 As well as casual sex, casual drug use was, as they say, rampant back in the day, and Boch is not shy about that either, although heavy drug use took a toll on many club-goers, including Boch, for many years. “My drug use got out of hand,” he said. “Drugs were pretty much, you know, free and easy to come by, especially when you were working the door and had the ability to grant people access, you know, so you’d be tipped in drugs instead of in dollars, and  sometimes you were tipped in both.” From the book: “At Mudd, cocaine was everywhere. Heroin was out of the closet and somewhat acceptable. Quaaludes were a hot item and bathroom fixtures like Linda Ludes or the Russian Punks had as many as anyone wanted.” Filmmaker Amos Poe recalls the sex-and-drugs attitude of the era. “Between ’79 and early ’83 I was increasingly using heroin, so The Mudd Club is related to that drug big time. It was also just pre-AIDS, so sex with many partners was de rigueur. The Mudd Club was a nightly Fellini/Bunuel film written by Bukowski and starring a panoply of Warhol-like Superstars. I would say that was the primary attraction.” 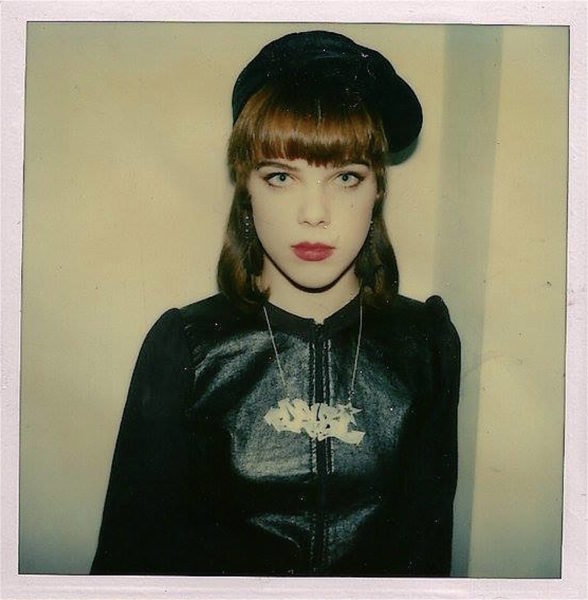 Boch maintains many friendships from the Mudd Club era, including Poe, Holman, photographer Kate Simon, the Bush Tetra’s Pat Place, and others, “because I think we shared the sense of community and we were part of this energy that occurred at the Mudd Club. I looked at it like it was the heart of the scene. Or at least in my mind, it was. And I think a lot of other people did too, and it was this hub of information. It became part of us the way we became part of the Mudd Club.” Boch’s friend Holman agrees with that assessment. “The Mudd Club was an all around social, art, and music venue where we found refuge, inspiration, collaboration, support—it was probably  the most critical nexus for the media to plug into—the Belle Époque that was New York in the eighties. The media knew that they could come to the Mudd Club and meet all kinds of people,  find out what was going on, find out the pulse of New York in the late seventies and early eighties. It was a place where celebrities would go and be treated like everybody else. It was really a democratic phenomenon of hipness, of art, of style, of culture, of underground culture. And without it, I don’t know that New York would have been the same place.”

Richard Boch’s “The Mudd Club” chronicles that picaresque adventure through the sordid yet sanctifying nexus of downtown culture with a youthful tenderness bordering on nostalgia. Yet he remains clear-eyed about the past, as well as the present. Many made it out, some did not. As Talking Heads sang, “this ain’t no foolin’ around”. 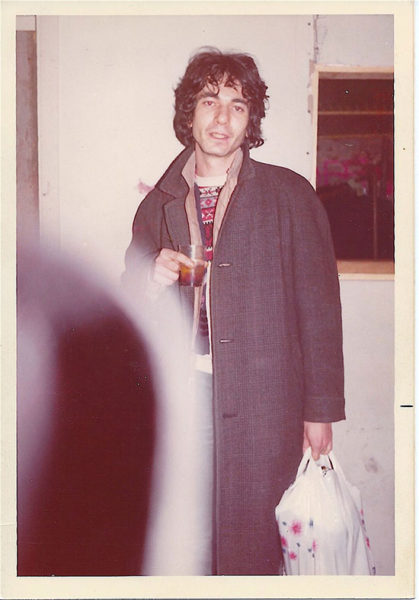 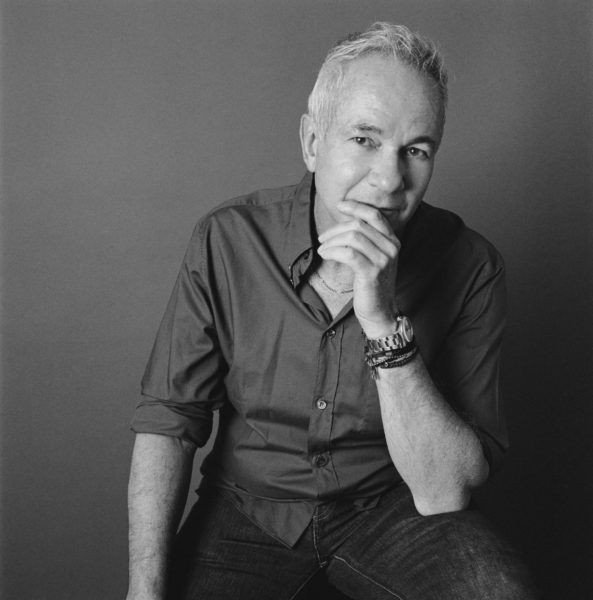 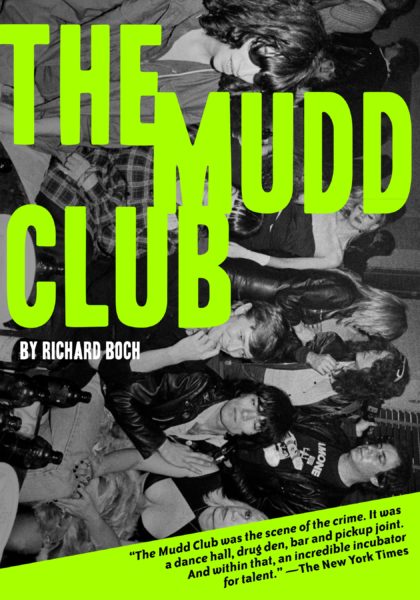 {Boch will be presenting and hosting upcoming “Club Room Nights” at the Soho Grand Hotel with DJ’s Fab 5 Freddy  and Dany Johnson on October 23, 2018, and Chris Frantz of Talking Heads on November 13, 2018} 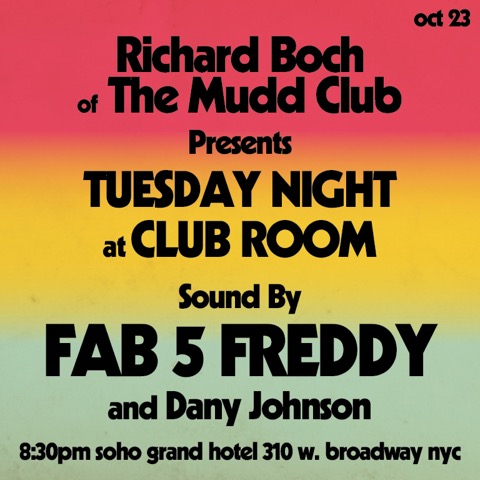 THE MUDD CLUB, by Richard Boch, Published by Feral House, 2017