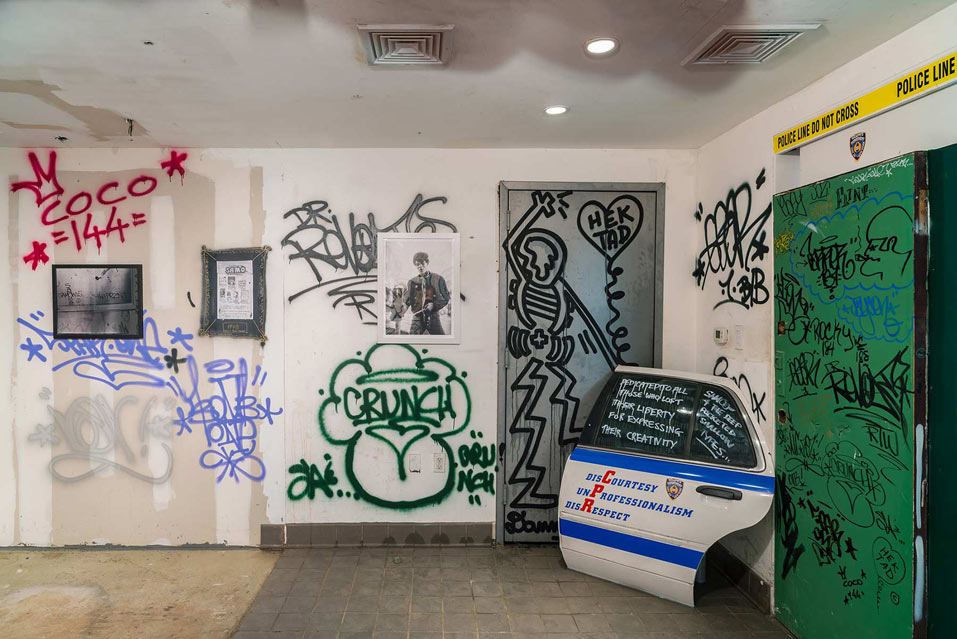 “A true pioneer of the street and a living legend, Al Díaz is still cranking out work today while his commentary remains as timely and poignant as ever.” —Dave Navarro 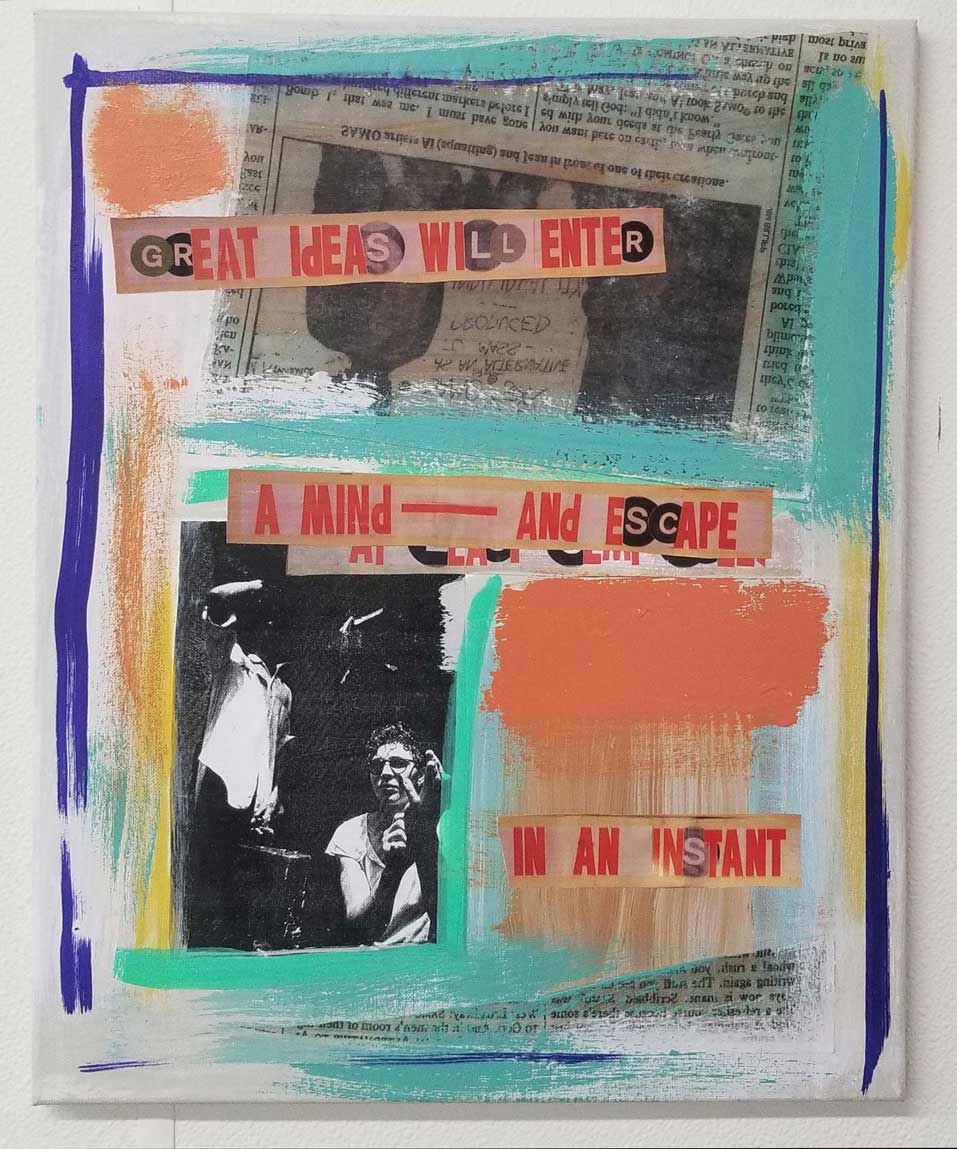 Street-artist-pioneer and wordsmith extraordinaire, Al Díaz, who co-created the most storied tag of all time, SAMO©, with his childhood friend and partner in crime, Jean-Michel Basquiat, is having a major comeback with his premiere art exhibit and book launch in the building where Basquiat lived and worked until his untimely death in August, 1988. Featuring original paintings, collage and graffiti, the show was organized by Brian Devlin of the Lazy Susan Gallery along with the eclectic photographer, Adrian Wilson. 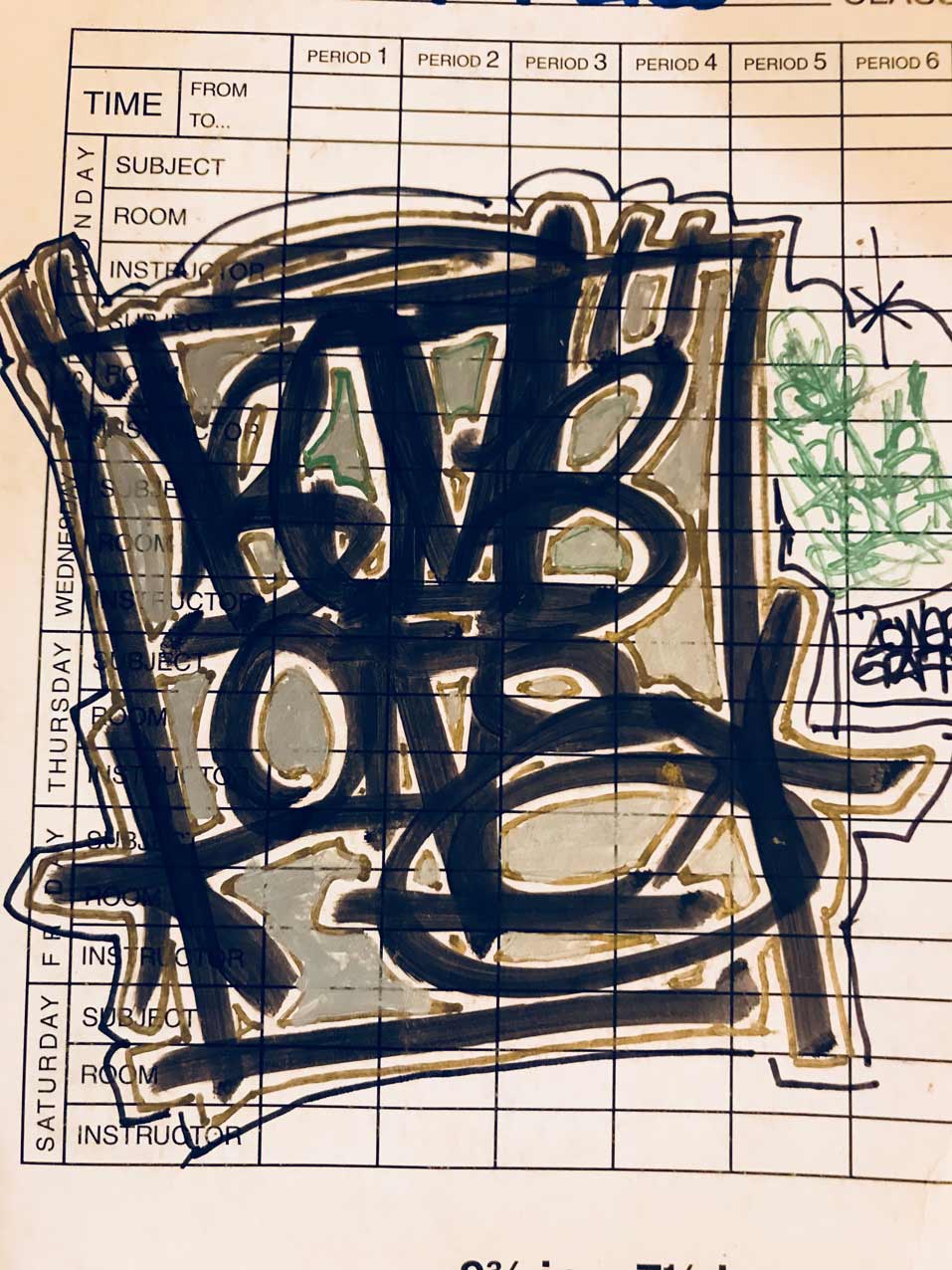 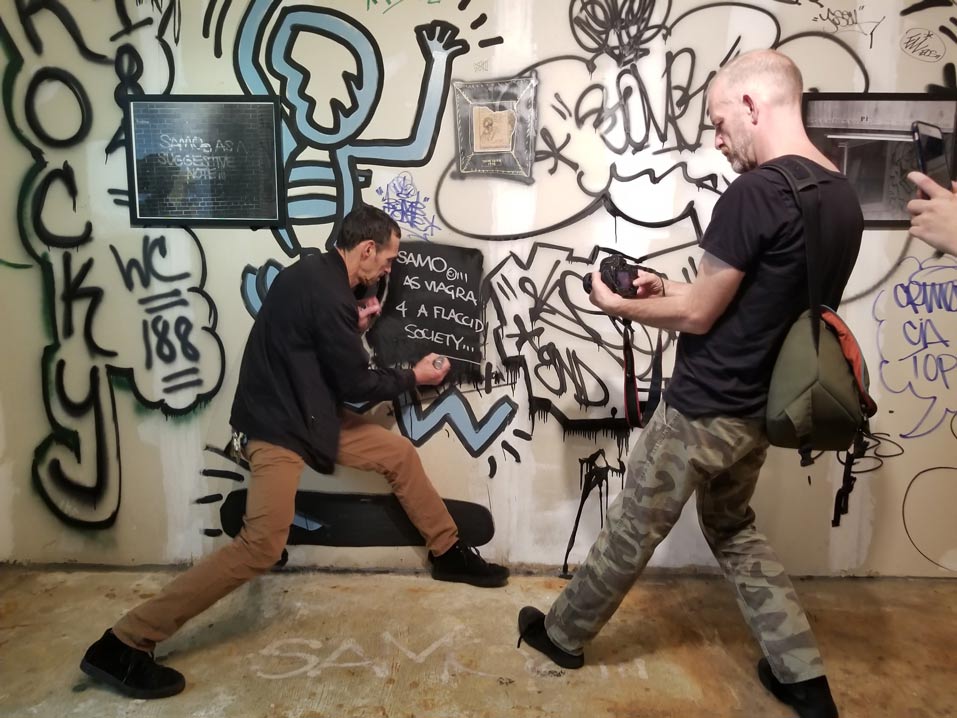 Al Díaz, a first-generation, New York City graffiti artist continues to create, exhibit and share his experiences as a key figure in the counterculture art scene from New York City’s graffiti heyday. The SAME OLD GALLERY, in a building once owned by Basquiat collaborator (and user) Andy Warhol, will be premiering Al’s newly developed book “SAMO©… SINCE 1978”. The book beautifully elaborates, illustrates and clarifies the history and meaning behind the SAMO© tag and writings. Edited and designed by academician Mariah Fox, and published by Irie Books (October 2018), the attractive 232-page case bound book features color images throughout, essays and a graffiti chronology by Díaz and Fox. Signed books are on hand for purchasing at the gallery. 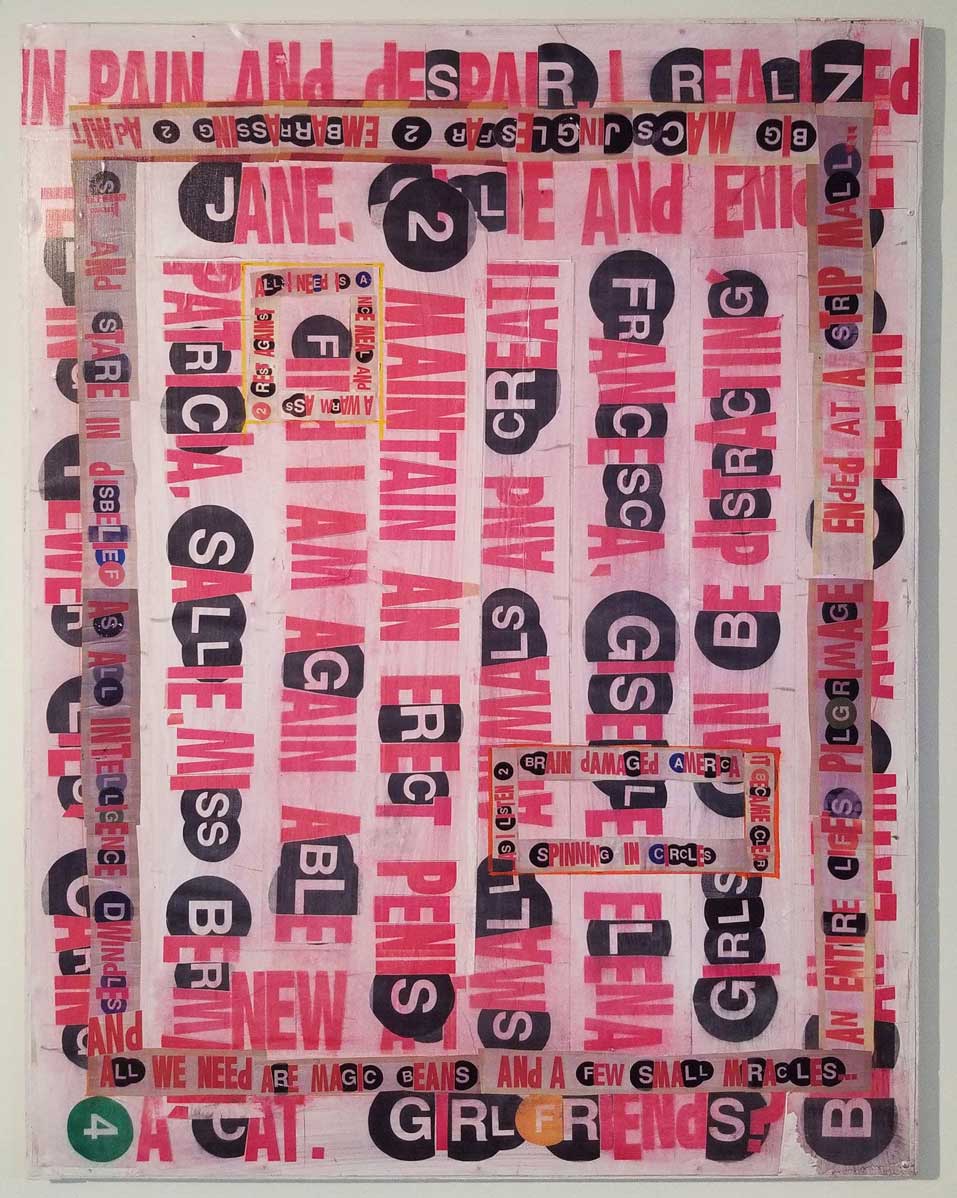 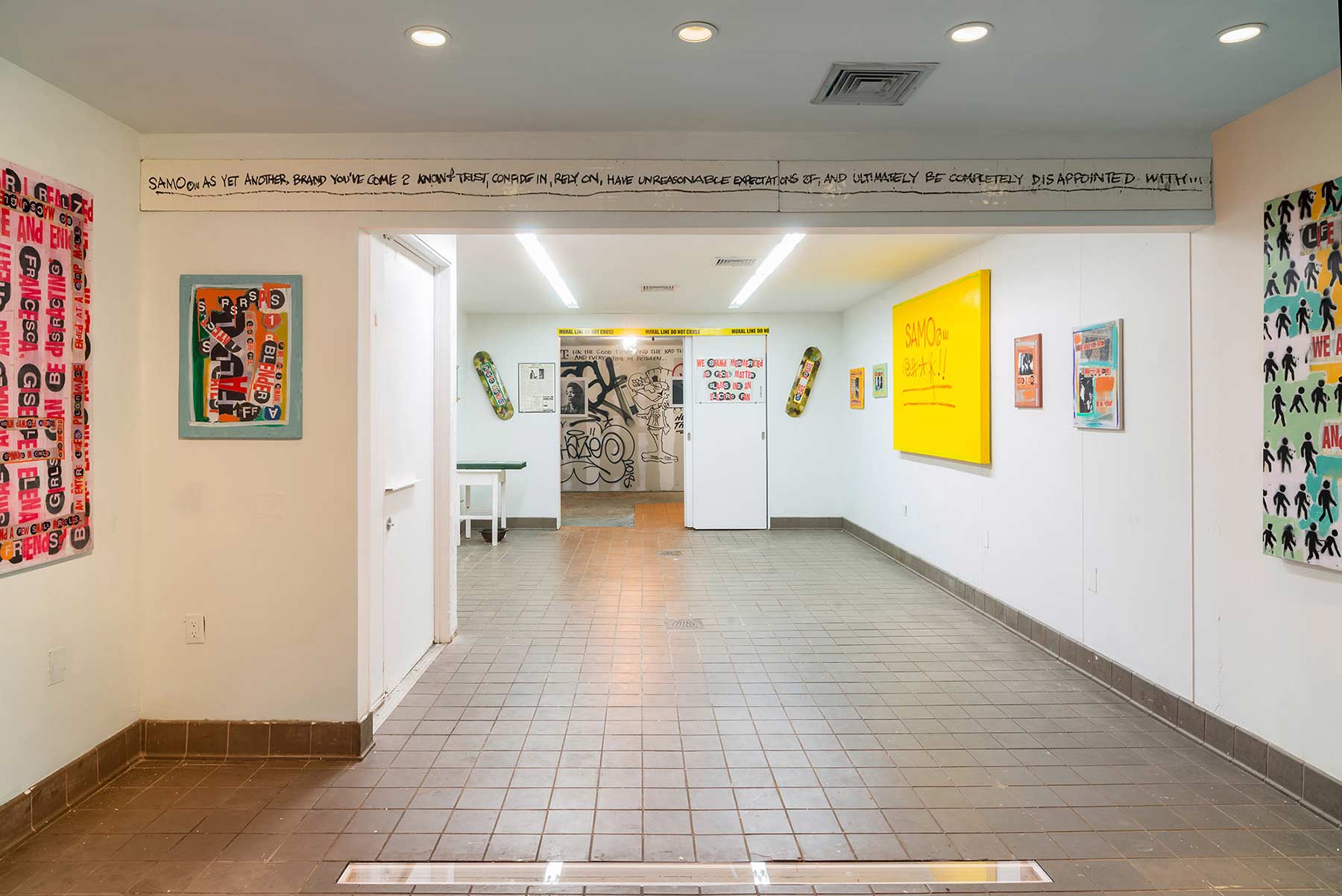 Of particular note from the show are Al’s Signage works which are as satirical and fun as a Banksy, but perhpas more guttural and provocative. And as the master poet, E.E. Cummings, did before him, Al paints memorable and at times dizzying pictures with words. The difference, however, is that Al makes use of them using a limited lexicon. Created over the last ten years, Signange is dictated by materials and letters found in the city’s subways and station houses. MTA “Service Change Alert” posters along with any “Wet Paint” signs become the affordable template for which to work, to arrange his alphabet, missing letters H, O, U, Y, X, K, and V be damned. Who knew?

“That’s where the art comes in,” says Al. “The challenge to create something new with limited means.” By his own rules, he must work only with that which is available: he can never write ‘shit’, it must be ‘fecal’ —there is no ‘h’ in the underground. “It becomes a mental game.” 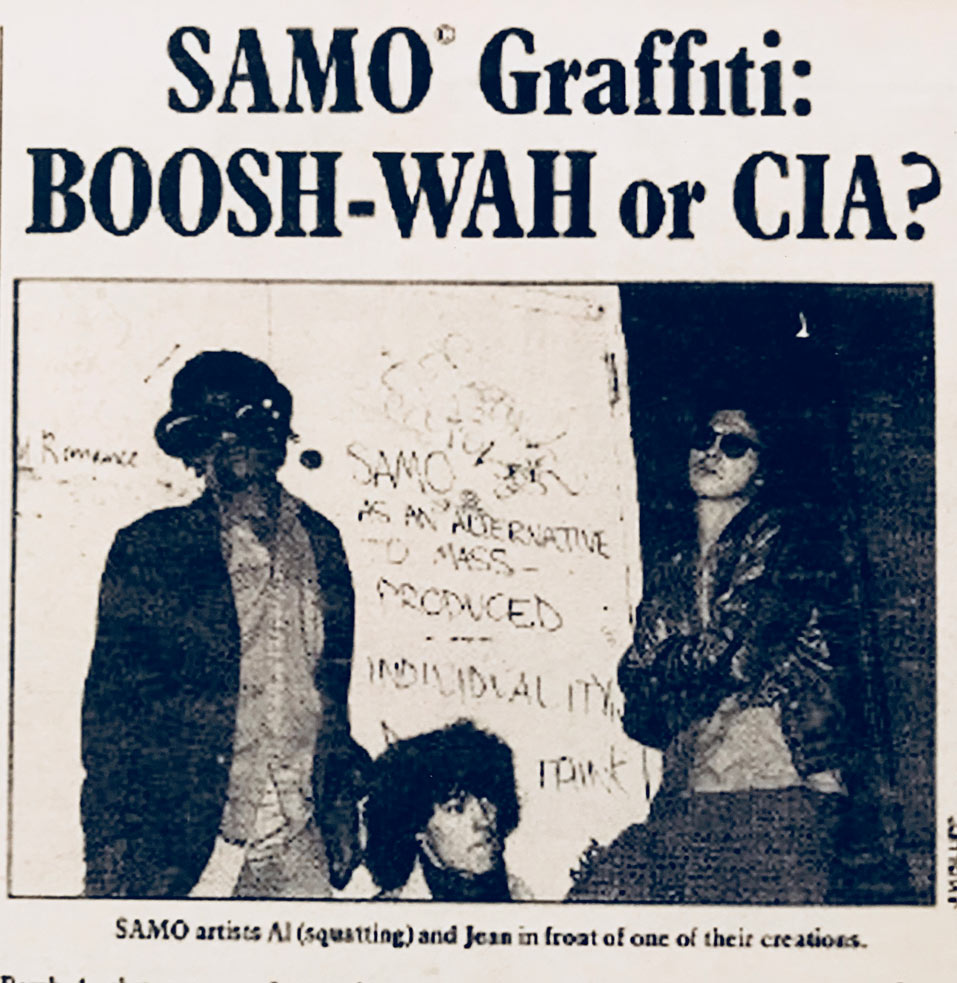 Al Diaz grew up in the housing projects on the LES. He’d be the first to tell you it was a shithole. A Puerto Rican kid from immigrant parents who came of age in the 1970’s in a city on the verge of bankruptcy. But along the way, he learned to love words, reading and Bob Dylan, Tom Waits, and Charles Bukowski. And even after a drug dealer took a bat to his head in 1987, breaking his jaw in two places, cracking a bunch of teeth and being left for dead, bloodied, on a Lower East Side street before intensive care for weeks, Al would always push forth with words, writing them in fonts he’d script in those black book sketchpads graffiti artists carried with them everywhere back in the day (his are a treasure trove of pure brilliance). He’d carve out letters even as the heroin carved full control of his life, and yet he’d still read Bukowski to find a word or a passage to hang on to. And hang on he did. And why he is a hero of mine —because he never gave up. And because he’s been clean for eight years. And because he’s a walking thesaurus. A genius wordsmith for an era that seems hell-bent on using less and less words. Especially ones that carry truth and meaning. Al minces letters but never words. And his will have a destiny for generations to come. 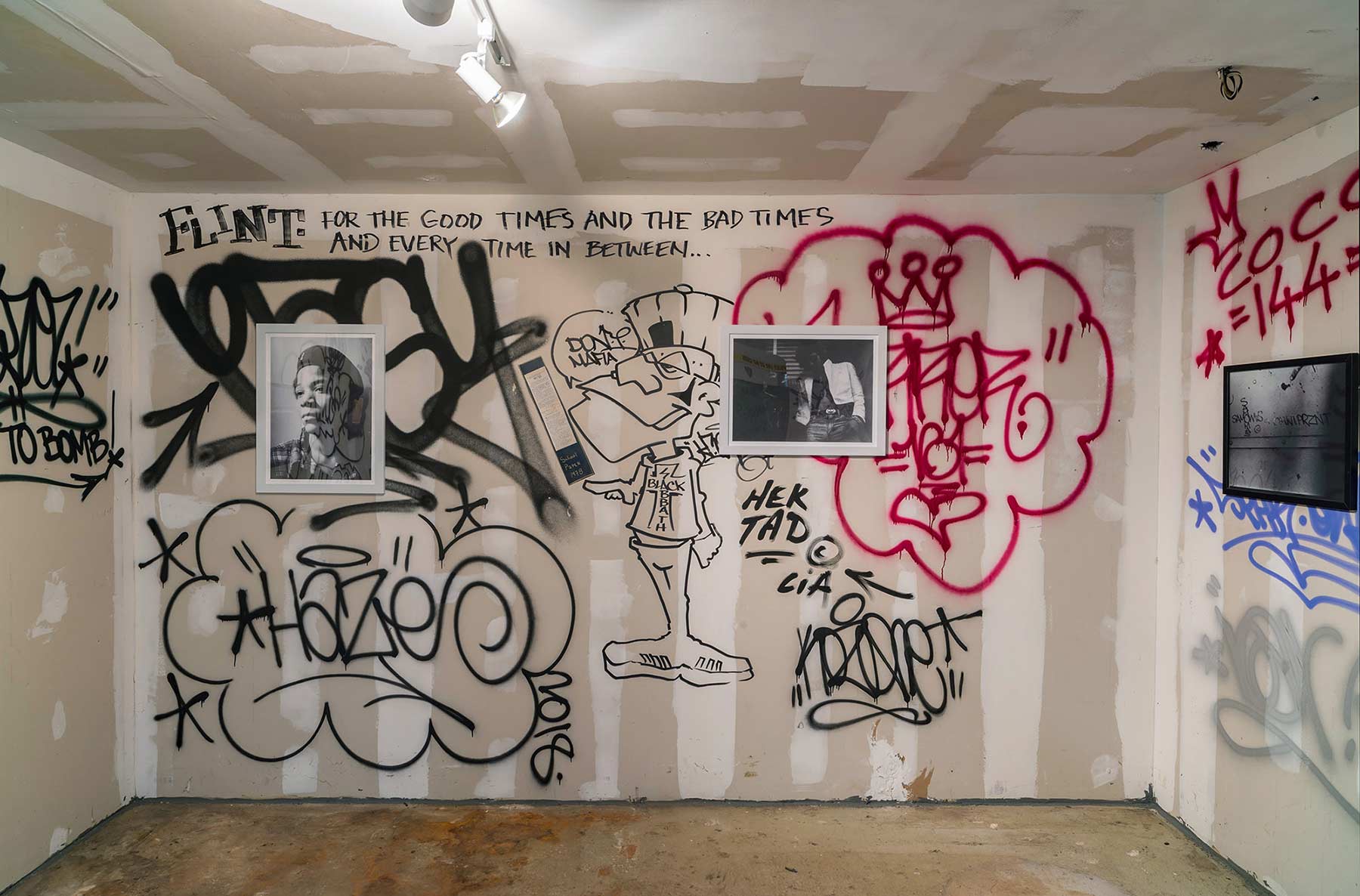 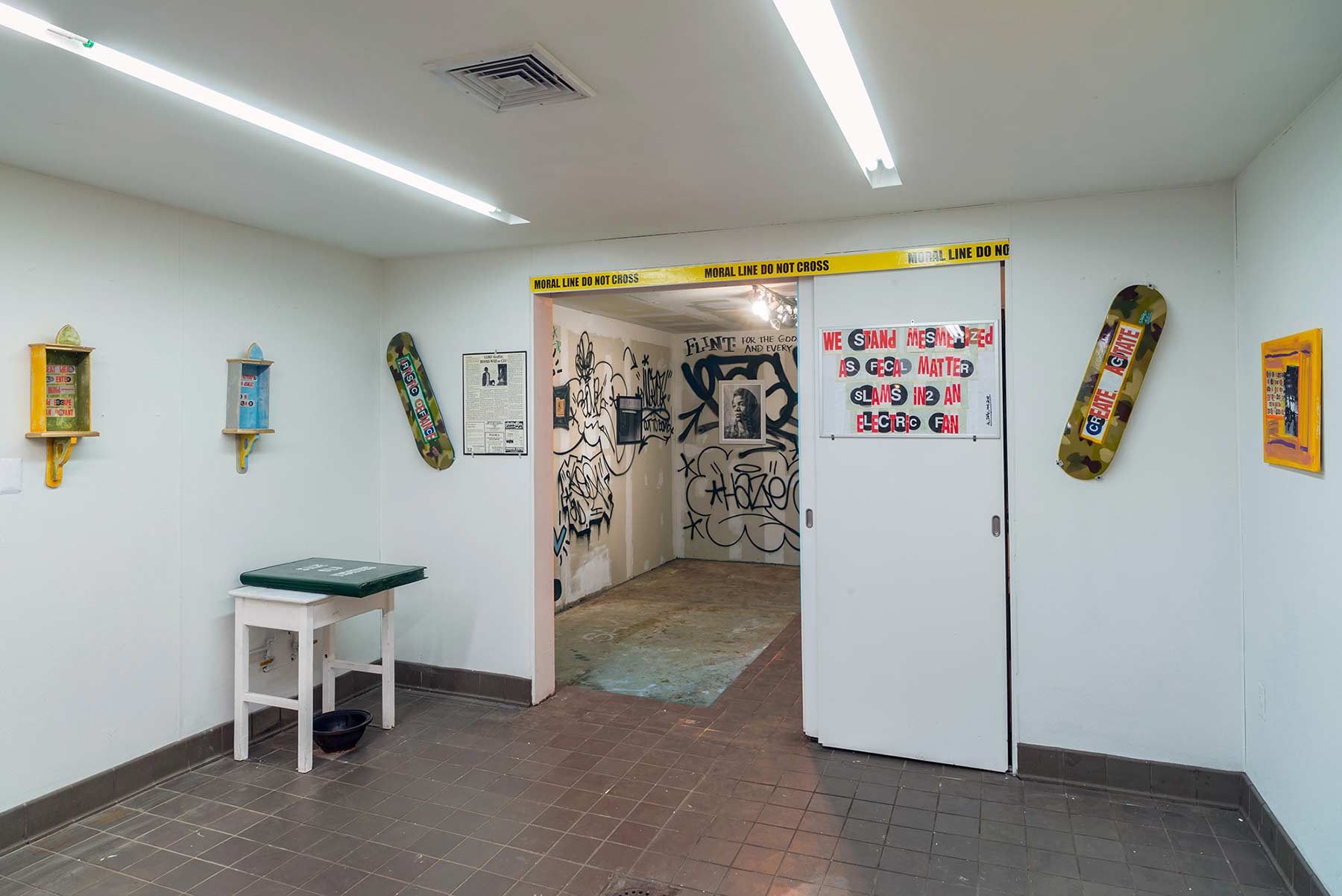 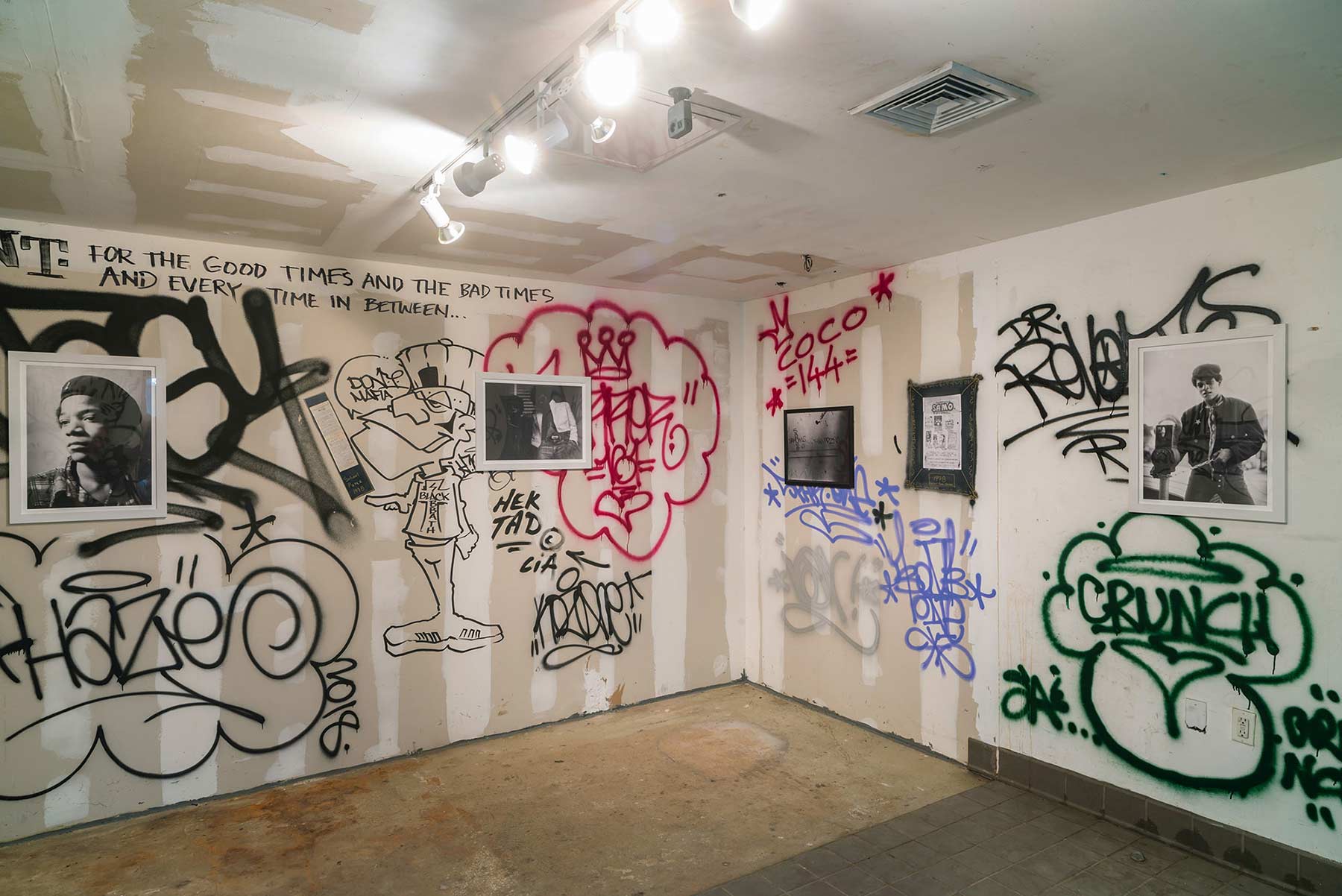 Proof of that was when a bunch of his graffiti friends (legends in their own right) arrived at the Same Old Gallery to give their blessings on his show, and gave their full approval by tagging the back room in his honor. Nic 707, Crime 79, Revolt, Haze, Keon 1, Rocky 184, Crunch SA, Spar, CoCo 144, EASY, KOZ, and KR 1 all showed up to lend their support to the life and art of Mr. Díaz. There, too, were a bunch of graffiti artists from later generations watching in awe as the old school pack started piling into the gallery. And Al’s more recent collaborator, Danny Minnick, tagged the back room to show his solidarity as well. Respect was in the air. And it was fresh as fuck. And the finished product a sort of Sistine Chapel of graffiti. —Gregory de la Haba

“His signature will be etched in history as one of the most handsome tags of all time.” —Lee Quinones, Graffiti Artist, on Al Diaz

“The linguistic play at work in SAMO© is certainly central to the development of Jean’s voice as an artist, but it is also very relevant to Al’s work. Diaz is an utterly credible figure in the evolution of illicit public art, but we wouldn’t be talking about him now if he weren’t doing something that is still noteworthy.” —Carlo McCormick, art critic, Paper Magazine 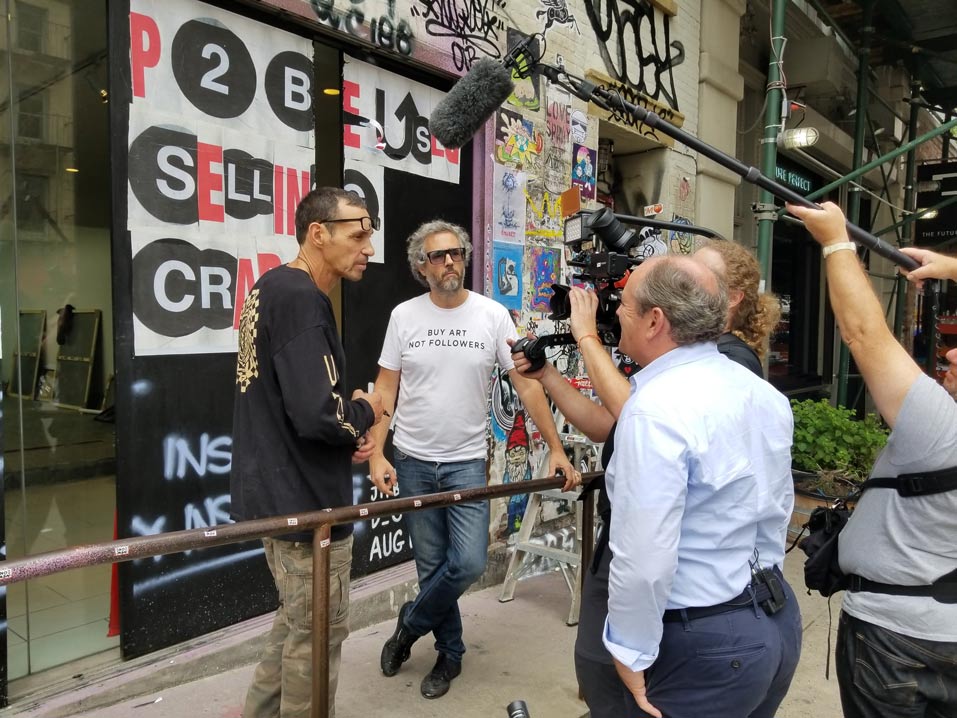 Al’s show at Same Old Gallery, 47 Great Jones Street, runs until October 20th. Run to see it before its too late!