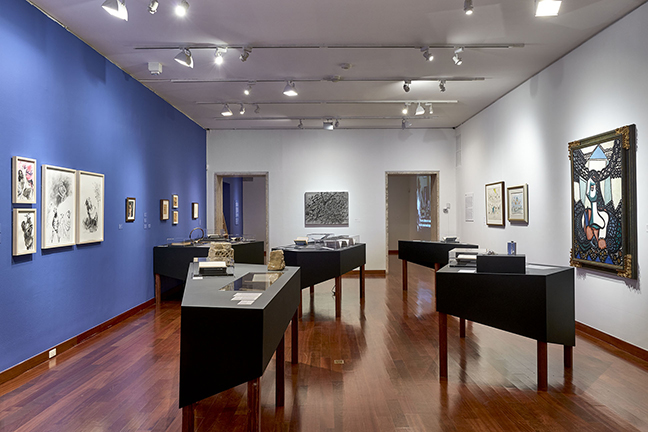 Lydia Cabrera and Édouard Glissant: Trembling Thinking opened at the Americas Society mansion at 680 Park Avenue and 68th Street on the 9th of October and remains open through the 12th of January 2019; this is too short notice but try to see this important and subtle exhibition.  The extraordinarily inventive installation involves several wall projections, writing on the wall, fine paintings and drawings hung in intuitive rapport, a deep blue wall and rare publications displayed ingeniously under and over Plexiglas structures that are both built into and rest on super black asymmetrical furniture-like units. The subtle black display units are elegant and completely irregular, opening new territory in exhibition design and suggesting alternative placements for their future venues; the work of architect-designer Giacomo Castagnola, of Gérmenes Estudio in Mexico City. 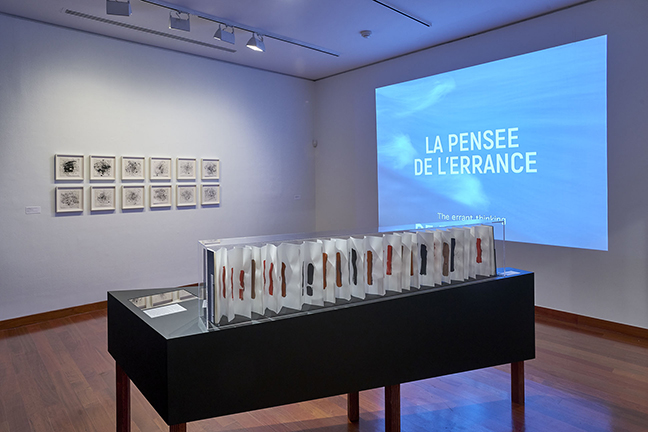 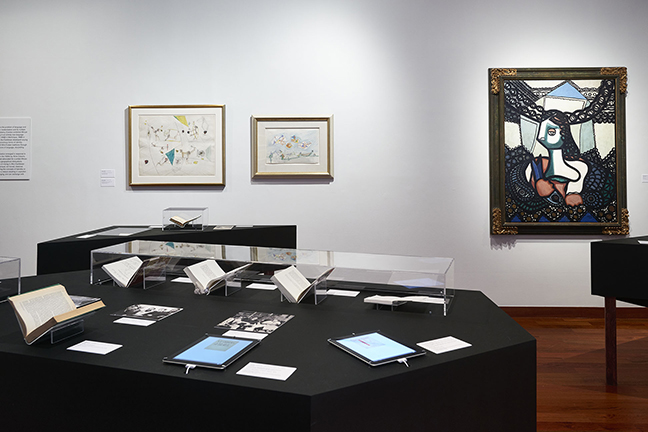 Works by many artists and exhibition display elements with texts. Photo: Arturo Sánchez. 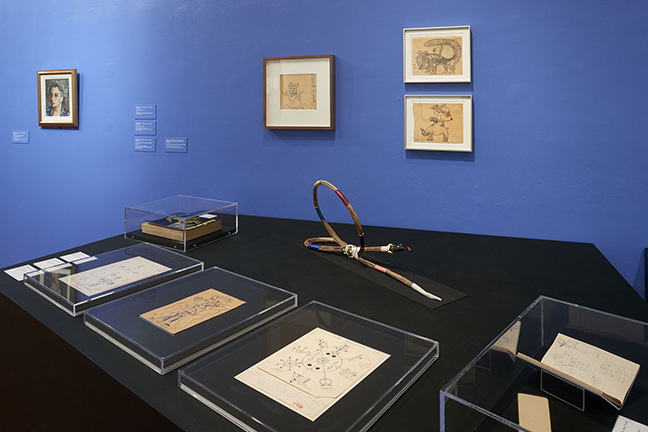 Works by many artists and exhibition display elements with texts. 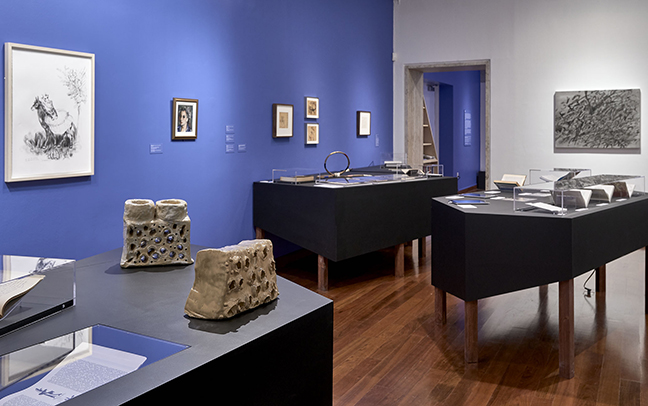 Works by many artists and exhibition display elements with texts.

Co-curated by Hans Ulrich-Obrist,  Gabriela RangeI, and Asad Raza. In 2016-17 at the Boghosian Foundation in Brussels, Obrist and Rasa put together the exhibition Mondialité to direct light onto the work of Glissant whose project Tout-Monde calls for global dialogues that can maintain original local cultures. When America’s Society curator Gabriella Rangel was approached to host the exhibition she greatly augmented the project by including the important and under-appreciated work of Lydia 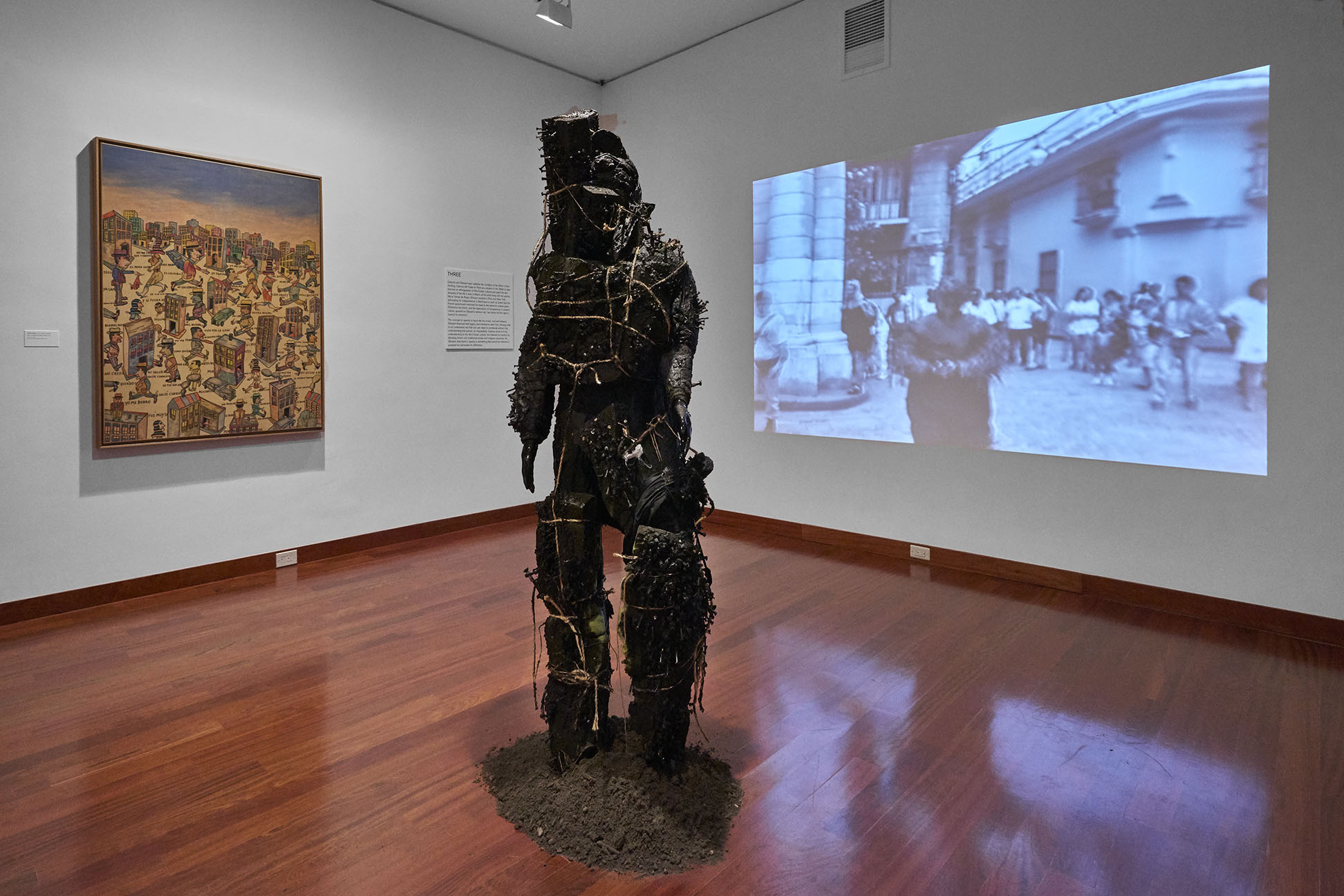 Cabrera, and the celebrated Cuban artist Tania Bruguera. Bruguera is a social sculptor and she is well acquainted with Lydia Cabrera’s independent scholarship, ethnographic and botanical work on the Afro-Cubist heritage of Cuba. Cabrera’s works about Cuban myth and rituals were published in Paris by Gallimard and have reached an international audience. 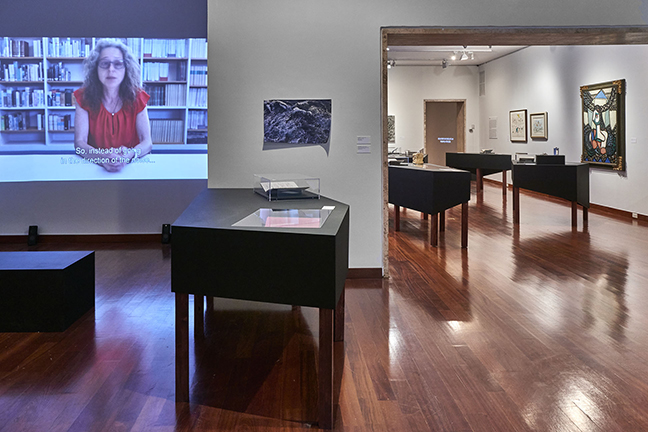 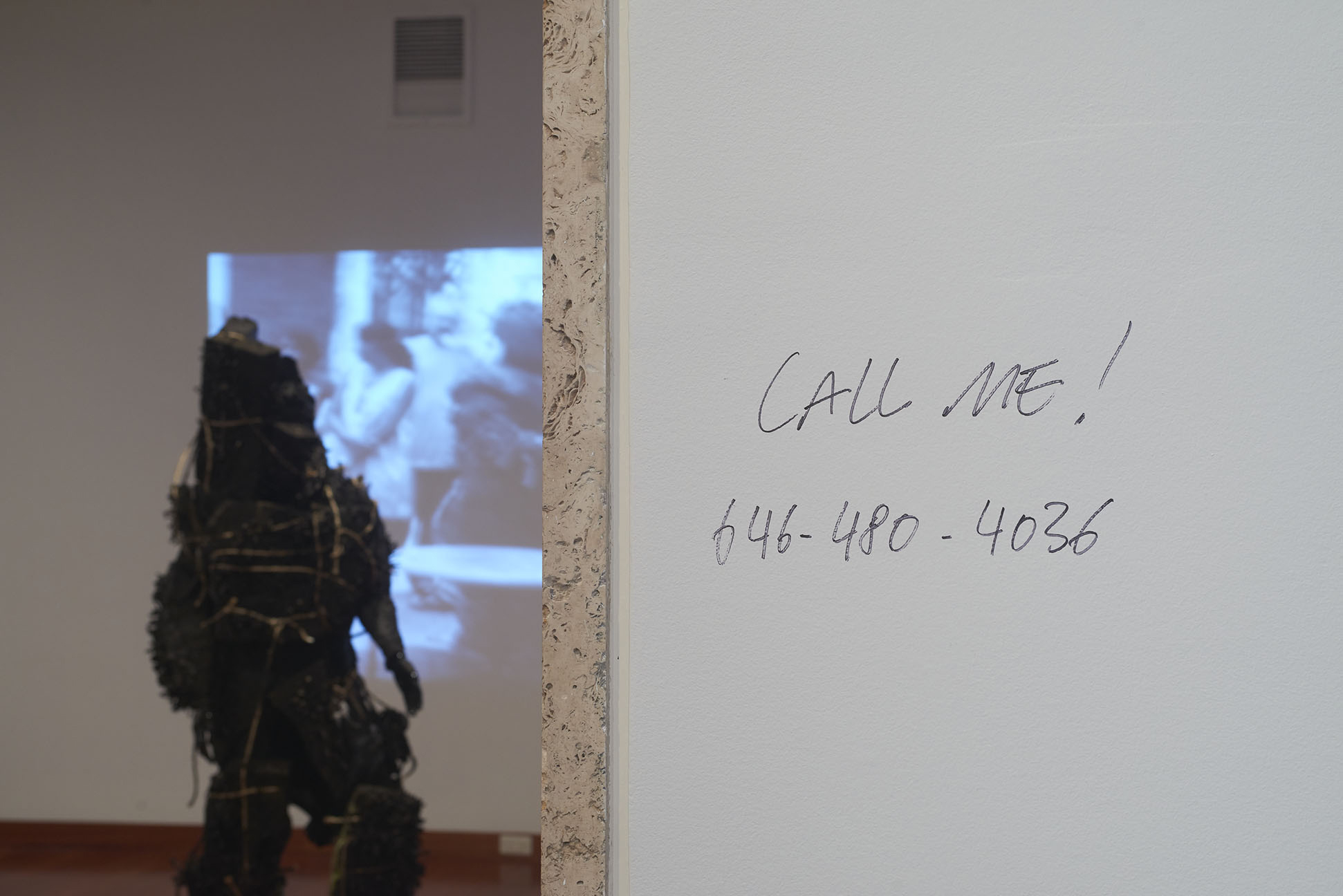 In 1998 Bruguera made a sculpture-costume of an Afro-Cuban deity, in part to challenge the government-imposed Catholic religion. The costume was made using Cuban earth, glue, wood, nails, and textile. The 2005 version is installed free-standing in front of a wall-size projection of her action in 1998; she started wearing the sculpture motionless in a gallery space on Fidel Castro’s birthday which is a Cuban holiday. She walked into and through the streets of Havana and was followed by a growing crowd of people who knew this native Afro-Cuban character. When a policeman stopped her and asked her what she was doing, a child nearby told him ‘it is art.’ Tania Bruguera, whose art-engagement and activism is approachable, is currently to be found throughout the Tate Modern, London, 2 October 2018 – 24 February 2019. 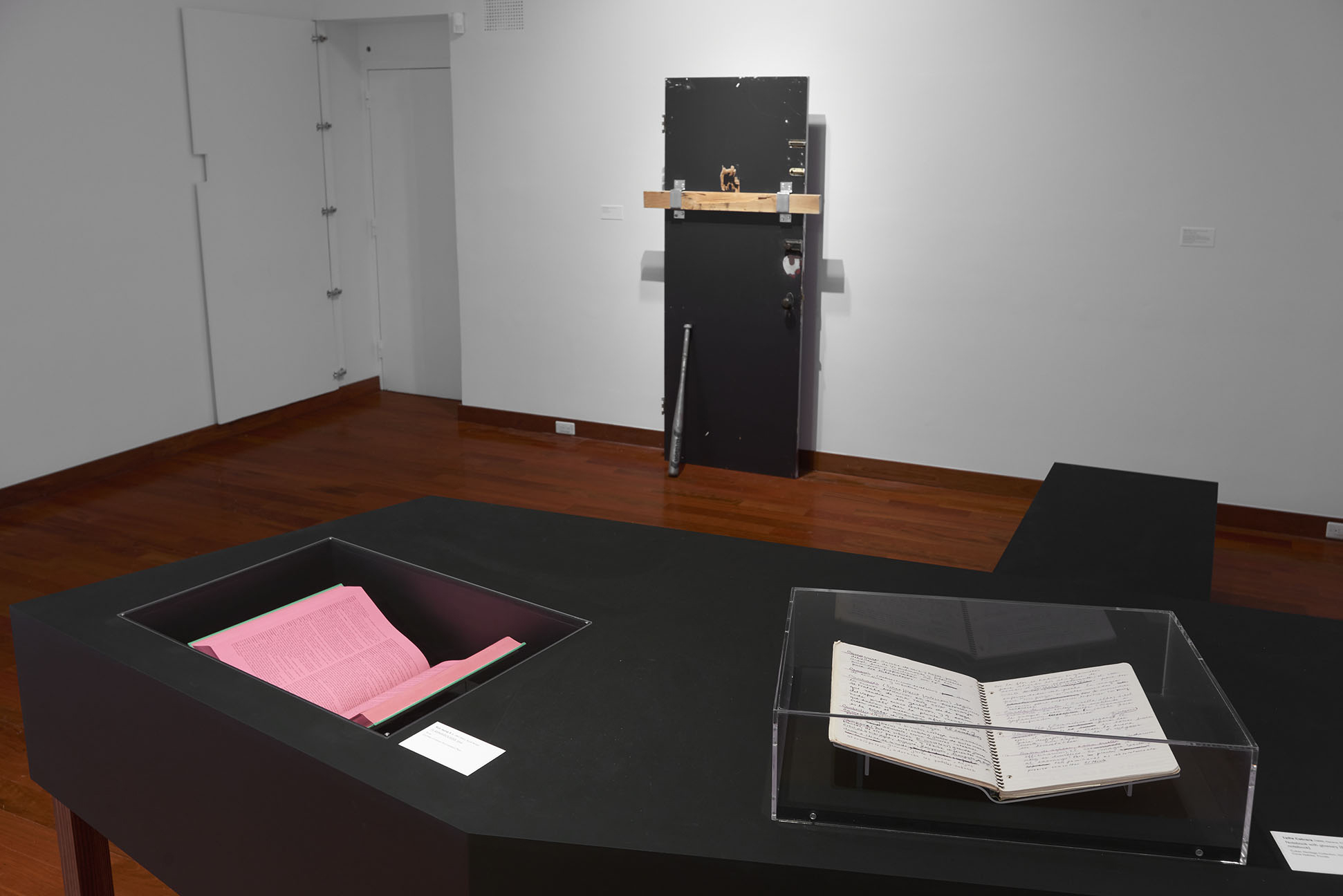 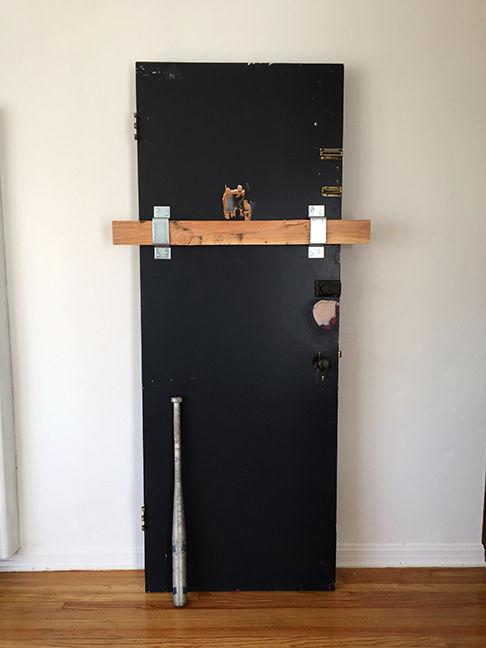 The artworks, texts, videos, and sculptures in this exhibition are informed by socio-political intention. You are invited to make two phone calls by drawings on adjacent walls to a doorway that say, “Call Me…” (a work by Phillipe Parreno). The calls connect to Édouard Glissant recordings. A book of Glissant’s writings was assembled and published in a large cloth bound book whose pages are a brilliant pink with an equally bright green cover by Koo Jeong A.  A particularly compelling broken and barred door with an aluminum bat, is leaning against a wall by Diamond Stingily. Wilfredo Lam and Roberto Matta Eucharren, well known South American Surrealists who lived for periods of time in France and who knew Glissant, are represented with beautiful framed drawings. A list of participating artists merely attempts to give an idea of the range of works to be enjoyed: Etel Adnan, Kader Attia, Tania Bruguera, Manthia Diawara, Mestre Didi, Melvin Edwards, Simone Fattal, Sylvie Glissant, Koo Jeong A, Wifredo Lam, Marc Latamie, Roberto Matta, Julie Mehretu, Philippe Parreno, Amelia Peláez, Asad Raza, Anri Sala, Antonio Seguí, Diamond Stingily, Elena Tejada-Herrera, Jack Whitten, and Pedro Zylbersztajn 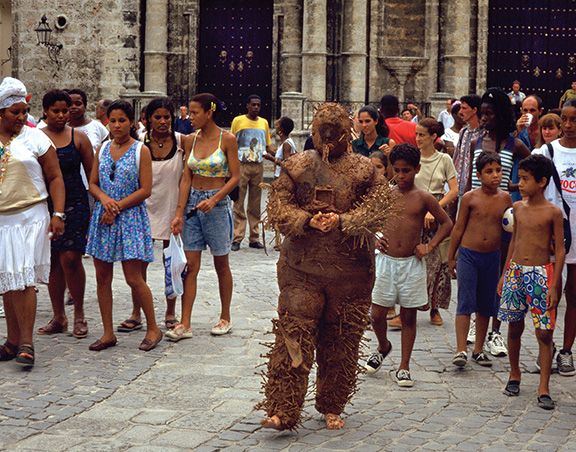 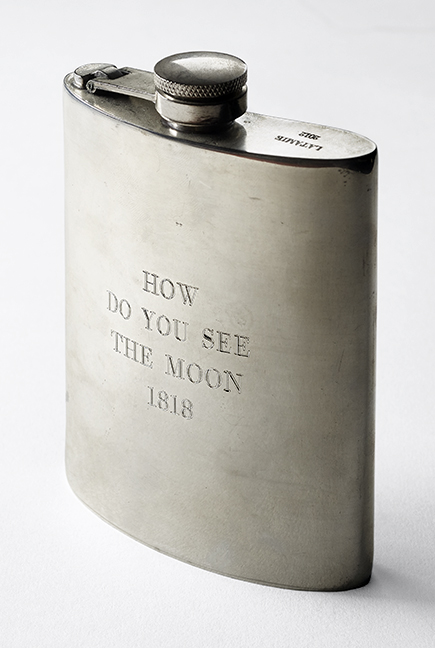 The combined works create an extraordinary conversation that addresses the stark reality and terror of dictatorial and repressive governments and the beauty of life and the arts. There is much to learn from the two principle creatives Lydia Cabrera and Édouard Glissant, who emerged from the cultures of Cuba and Martinique, and lived and worked in Paris. Both actively pondered and preserved the original sources of their cultures, inventing works of poetry, literature and utopian theory that is a guiding principle for the globalizing of 21st century culture.

Édouard Glissant teaching at the Institut martiniquais d’études, the school he founded in 1967. Private collection. 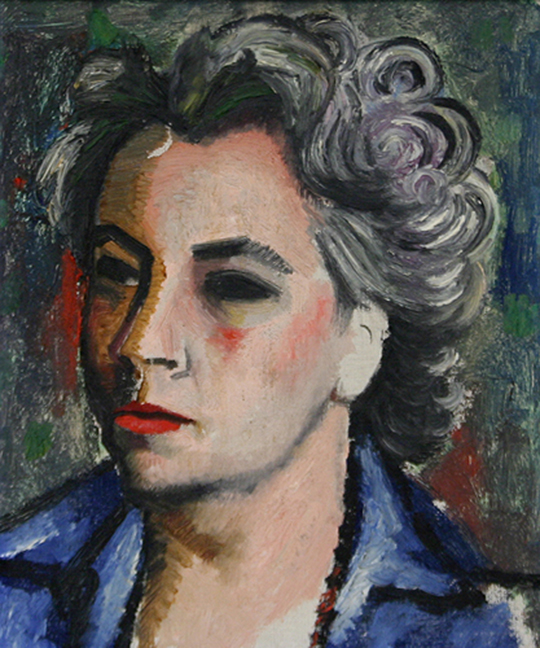 Lydia Cabrera and Édouard Glissant: Trembling Thinking is a rich reward for a trip to the upper east side; it is a philosophic cache of materials, a rare and wonderful assembly.