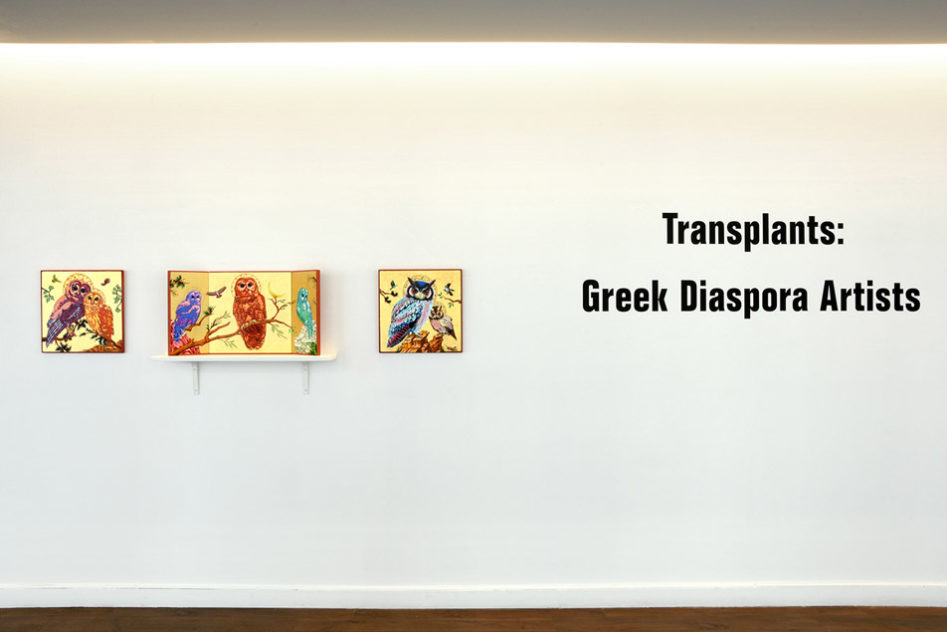 Currently on view at The Anya and Andrew Shiva Gallery at the City University of New York’s John Jay College of Criminal Justice is Transplants: Greek Diaspora Artists. Curated by Dr. Thalia Vrachopoulos, this culturally energetic show sets out to explore “the unique nature of diasporic art by Greek and Greek-American artists in the age of globalism.” Expertly installed within this airy space, the show takes full advantage of the college’s beautiful ground-floor Manhattan gallery. Transplants: Greek Diaspora Artists showcases artworks that are pluralistic and global in their approach, and relevant both inside and outside of the contemporary art world. Using a wide range of media at varying scales–including textiles, gold leaf, found objects, and installation–the exhibition balances a myriad of strong personal visions through a trans-national lens.


A lively Symposium inaugurated the exhibition, moderated by Vrachopoulos. Featured panelists included Dr. Nicholas Alexiou, Dr. George Andreopoulos, Art Critic Jonathan Goodman, and Artist Peter D. Gerakaris, each of whom posed thoughtful questions about Greek, Greek-American and Hellenic identities as they pertain to cultural communities and artists’ modes of production.  During the conversation, Vrachopoulos offered a universal sentiment which may ring true amongst many ethnicities, “I was born in Greece, but raised in the US. When I’m in the US, everyone calls me a Greek. When I return to Greece, everyone says I’m an American.” 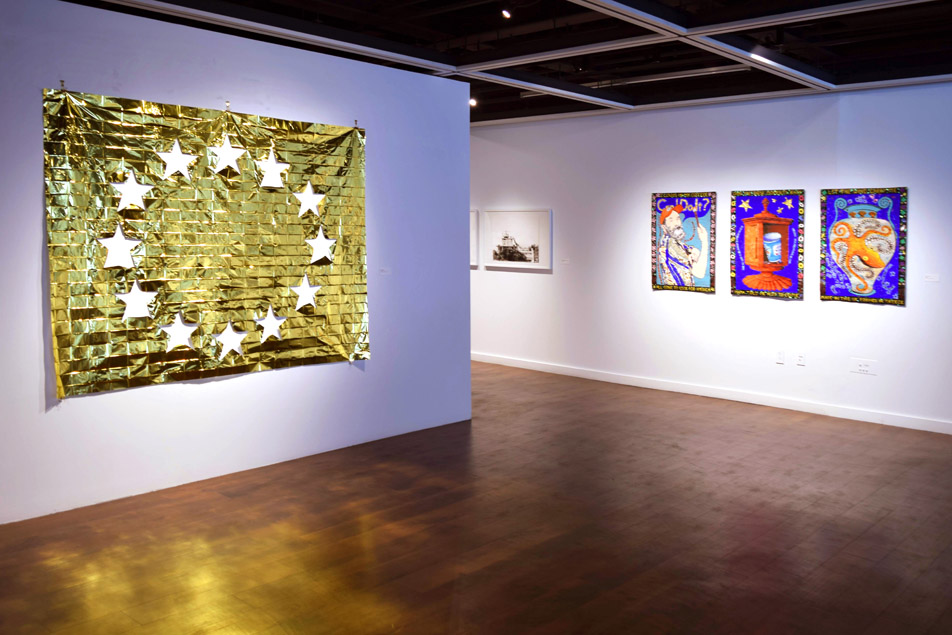 The idea of ‘placelessness’ is not new to art or its creators. This longing for place, or nostalgia, yields more urgency for today’s artists and ethnic communities as they strive to survive and reestablish a sense of place. With much of cultural production based in pricey urban city centers, artists are forced to adapt to challenges in highly creative ways. Like many immigrant cultures, a large percentage of artists from this exhibition work between continents to nourish their practice, finding community and support in multiple sites. These necessary migrations have transformed Greek artists into cultural hybrids, aka ‘transplants’ as they must inevitably assimilate in multiple environments. Within this pluralism, the viewer is left to infer each artist’s individual relationship with his or her own Greek heritage. 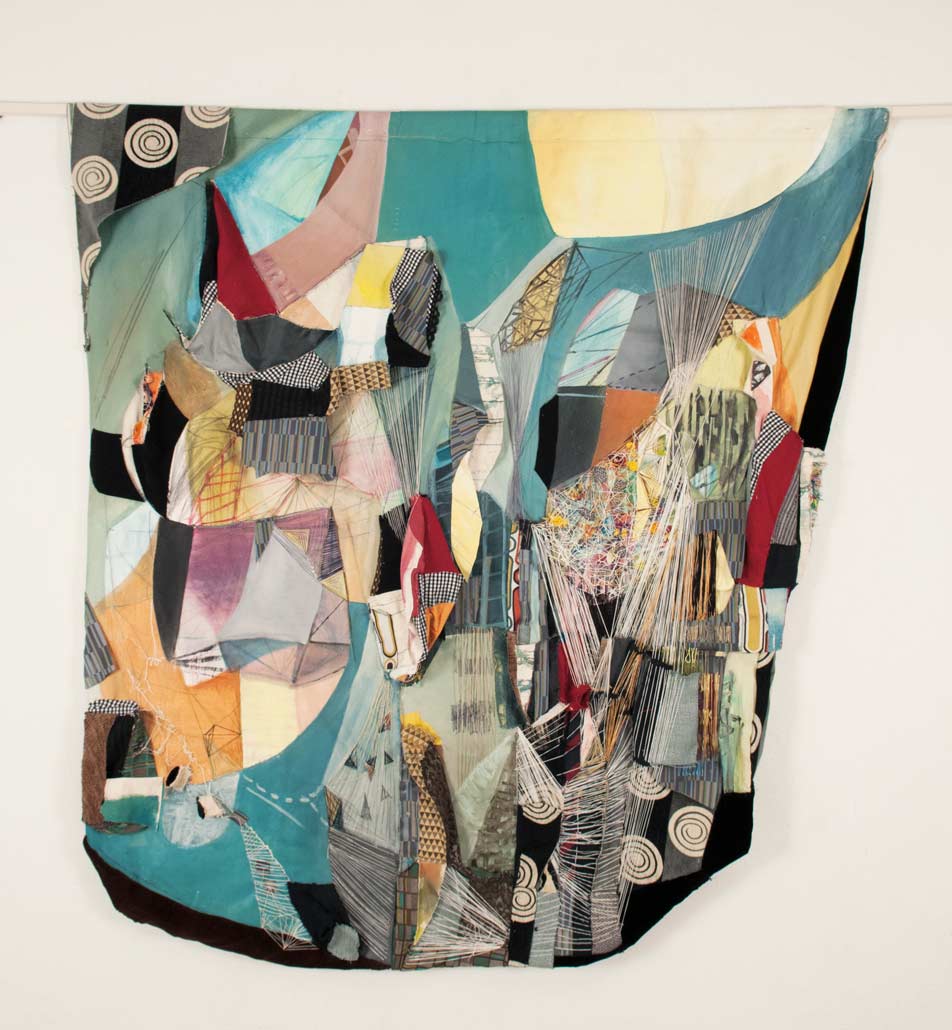 Eozen Agopian’s Between Two Continents-Off Broadway (2016), which is lovingly stitched by hand, attempts to merge multiple identities together into one polychromatic composition. By synthesizing texture, shape, and pattern, Agopian weaves a multi-layered dialogue rich with tradition, craft, and meaning. 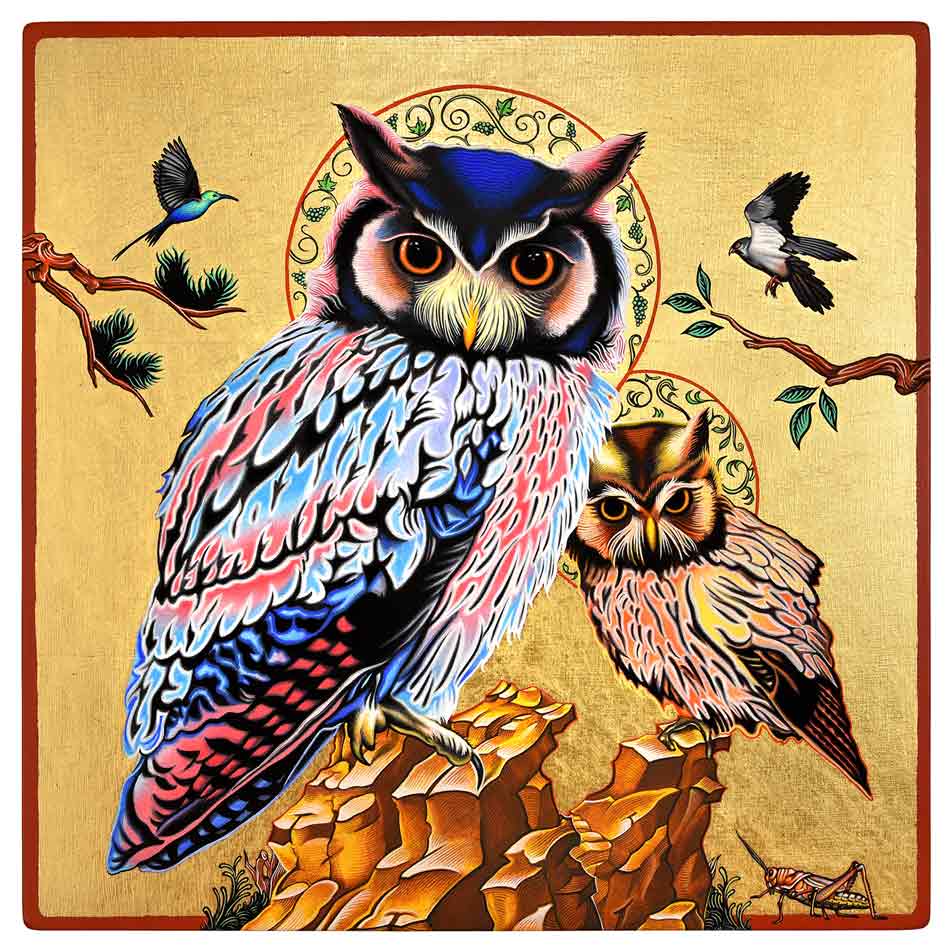 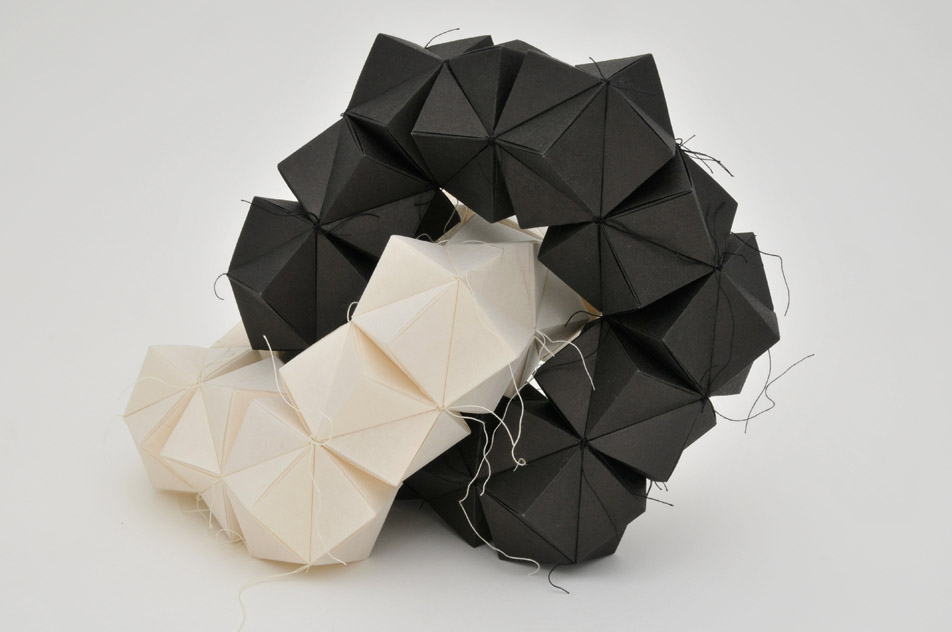 Zoe Keramea’s Link II (2015), a black and white hand folded paper and thread sculpture, creates a curious tension between the stoicism of platonic forms and the playfulness of their nested assembly. Dangling tendrils of thread taunt the viewer as they poke their way out of enfolded surfaces, blurring the lines between borders and identities. 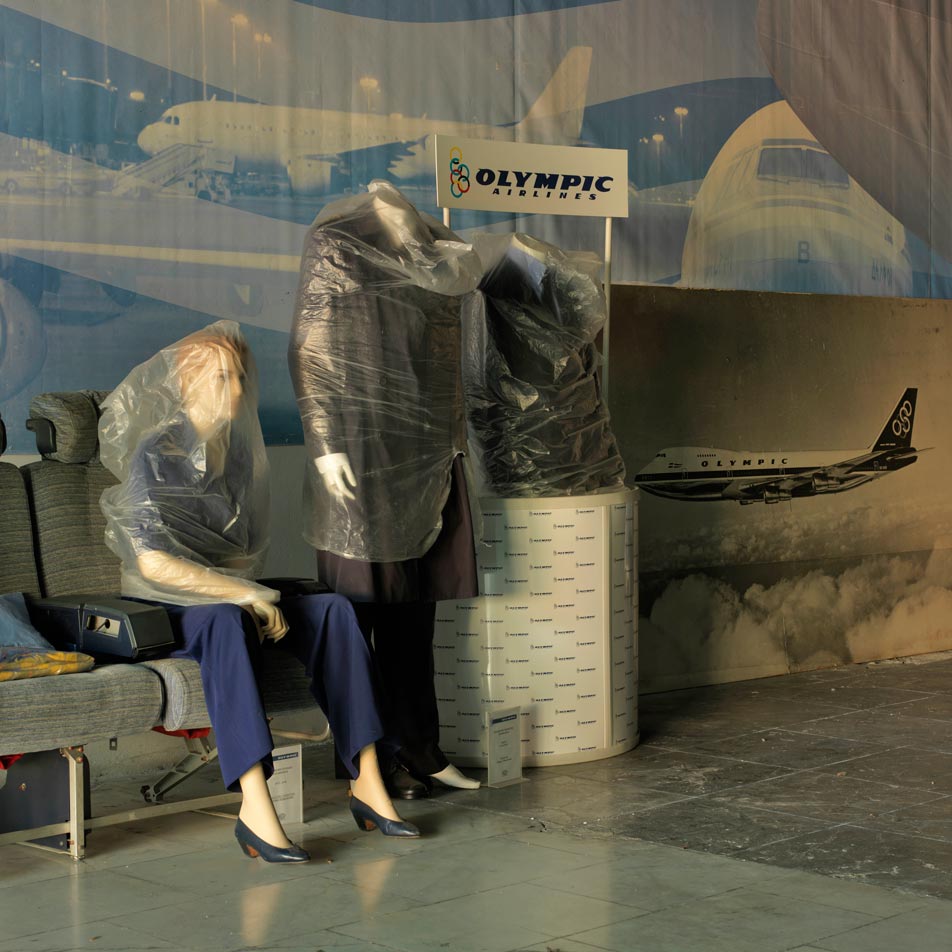 Alexandros Lambrovassilis’ ongoing photography series Ellinikon (2007-2013) examines the decay of a once thriving Greek airport that is a ghostly reminder of an era that has come to an end. Dystopian and deadpan, digital images rendered in retro tones evoke how the weight of history can sometimes suffocate the future, and the disintegration of a national consciousness. 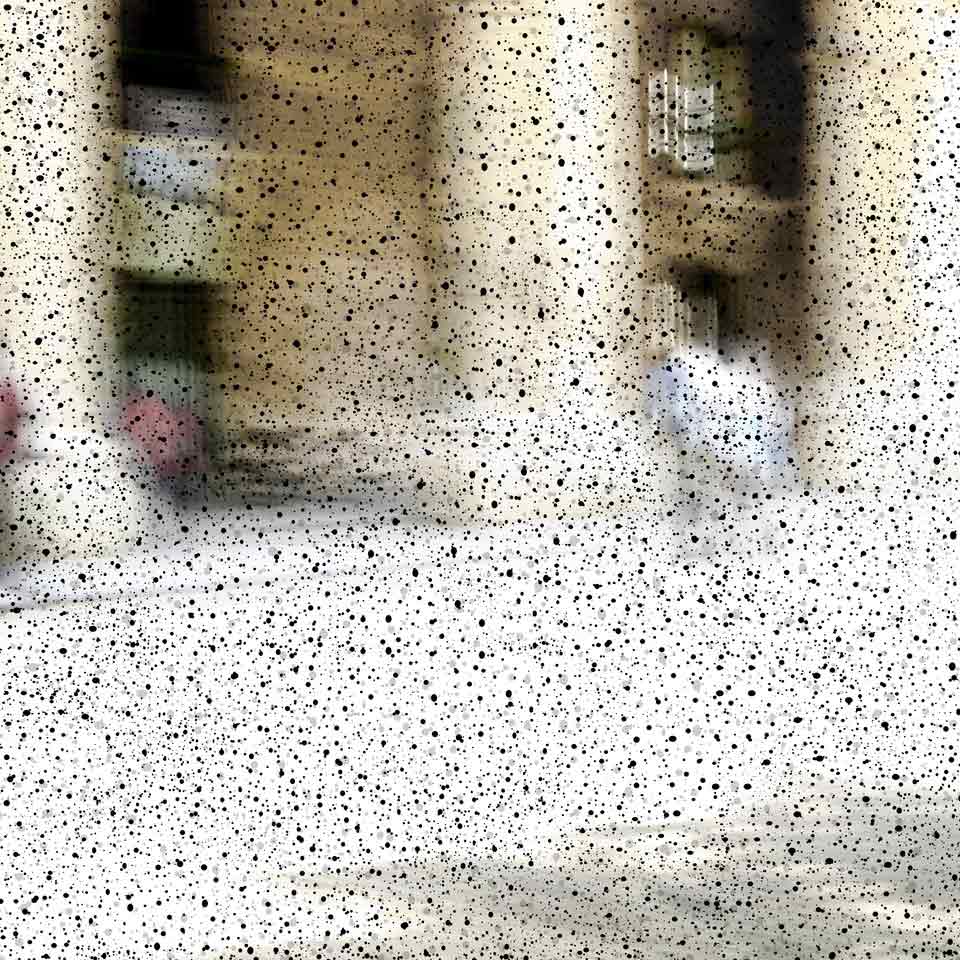 The namesake of Costas Picadas’ print Quark Tunneling (2016) references a false vacuum that exists on minimal energy, which by nature is unstable. By blurring internal and external space through this evocative tunnel, Picadas references placelessness and identity loss in the form of abstracted architecture and dappled time. 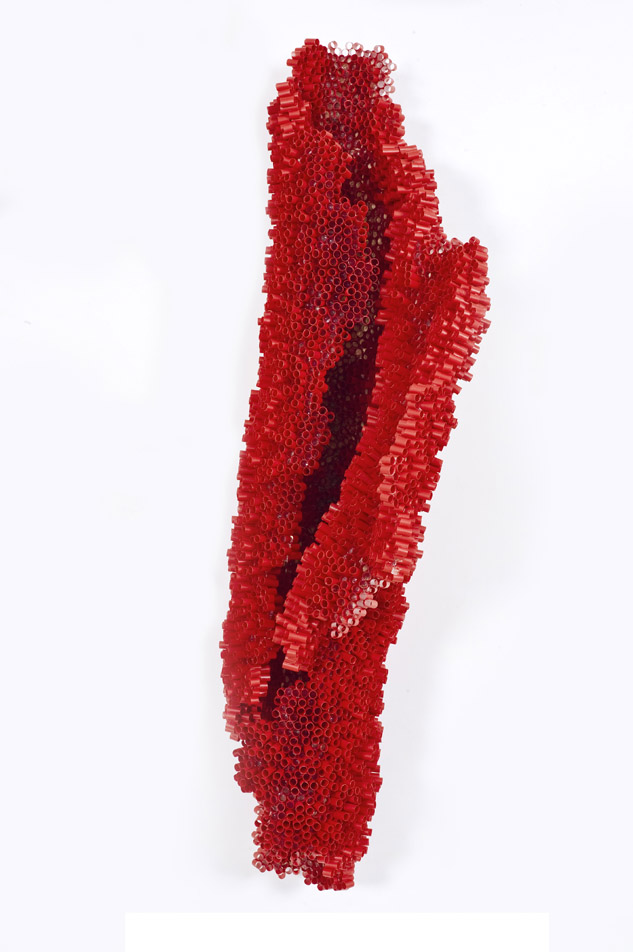 Konstantinos Stamatiou’s Inside II (2015) is part of a series of sculptural objects that present the body as open and erogenous zones. Comprised of undulating armature molded from plastic water bottles and drinking straws, these vertical organic forms suggest the corporeal, but also a modular landscape that symbolizes Greece’s 6000 islands. 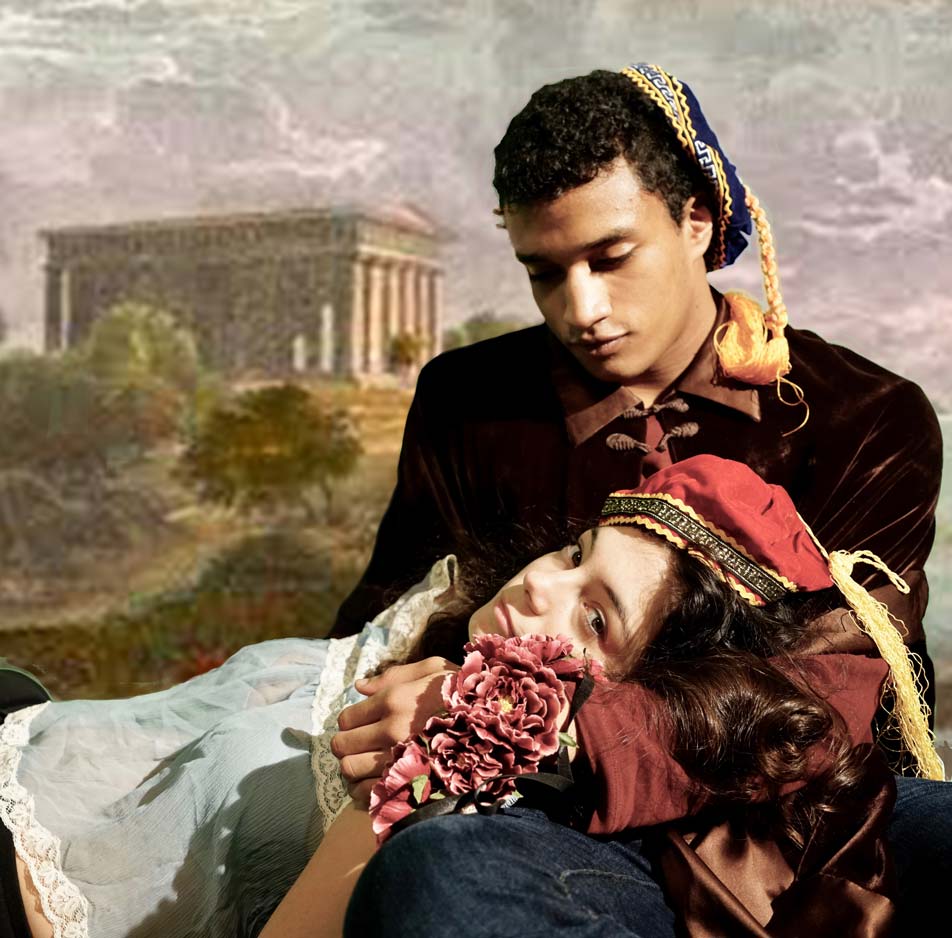 Lydia Venieri’s Byronic Series (2017) pays exquisite tribute to Lord Byron, the English Romantic poet by dramatizing the timelessness of his poems with the temporality of youth posed against elaborate sets of ancient ruins and mythology. Despite the opulent nature of these digital photographs printed on satin, Venieri’s compositions hint at a darker past that question today’s issues of immigration, identity loss, and the fight for citizenship.

Heather Zises is an independent curator and founder of READart, a curatorial platform for contemporary art and culture. Having launched her career at Pace Gallery and Phillips, she has curated numerous exhibitions and site-specific installations at galleries, alternative spaces and art fairs worldwide.  Heather is a contributing writer for diverse publications including Whitehot Magazine and Fjords Review, and is an art editor for Pregame Magazine. This fall, Heather’s first book, 50 Contemporary Women Artists, will be released by Schiffer Publishing.