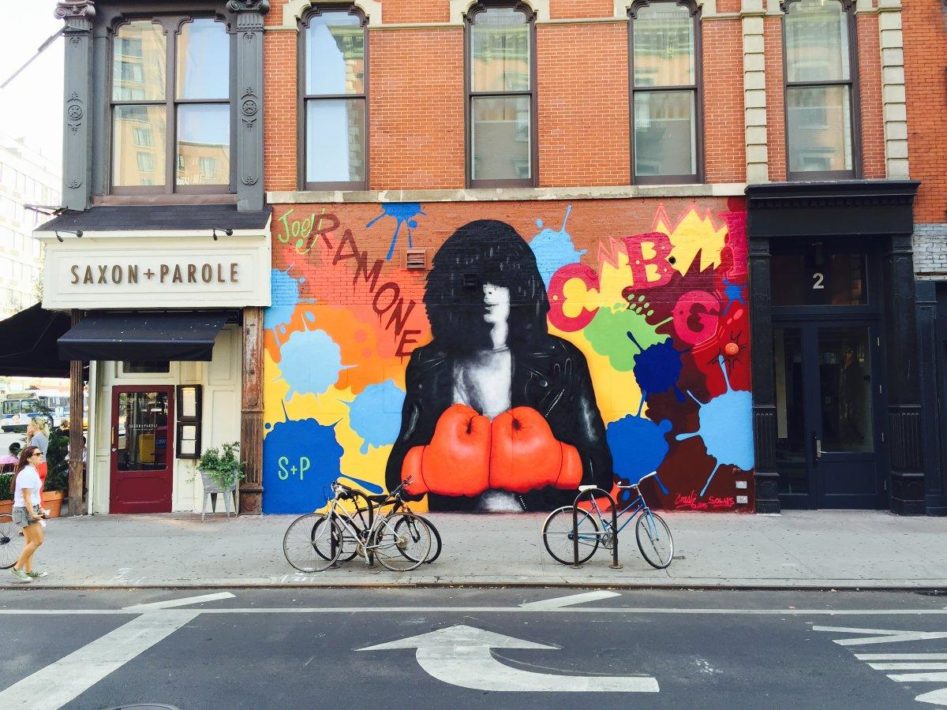 “The Bronx used to mean, ‘be careful’,” said John ‘CRASH’ Matos, owner of the gallery, Wallworks, in the South Bronx. “If you were born and raised in the Bronx, and you were anywhere in the world, people would look at you, like, hmm, with a little hesitation. But it’s a special place.” Matos was a seminal figure in the New York art scene of the early ‘80’s, who, aside from his monumental street work, managed to bring prominent downtown talents like Jenny Holzer, Keith Haring, Charlie Ahearn, Jane Dickson and others, to Fashion Moda, a legendary artist-supported space in Mott Haven. At 19, he curated the first graffiti art show there, called “Graffiti Art Success for America (GAS)”, which also included the work of writing legends Lady Pink and Futura. 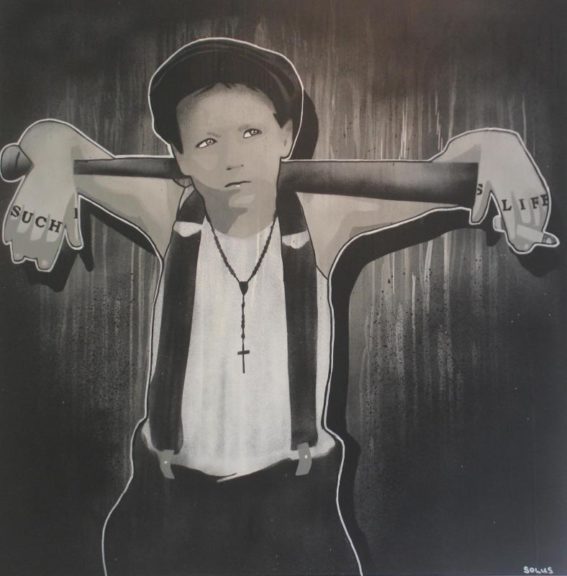 Such Is Life, Solus, IMAGE: Solus 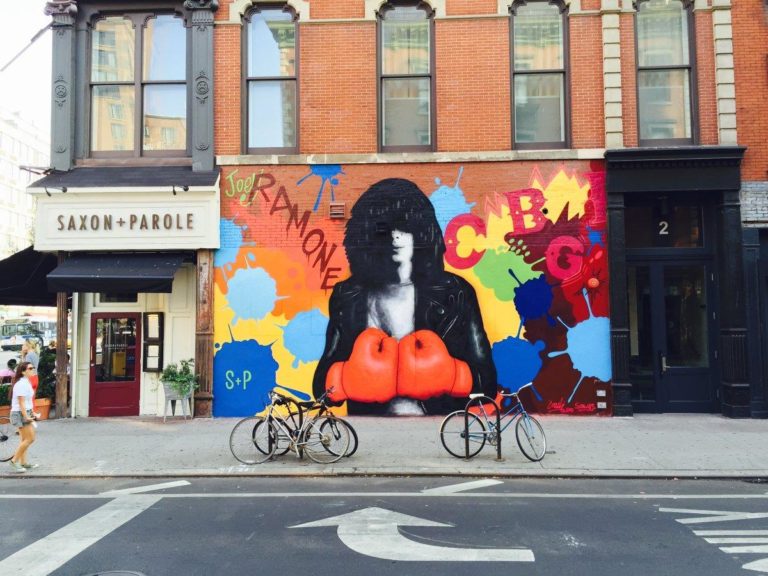 Ramones Mural by Solus and CRASH

Today, with his daughter Anna, who is Wallworks’ gallery director, he hosts Solus, an Irish street artist from Dublin. Solus’s first solo exhibition (Mis Spent Youth) in the Culture Box in Temple Bar, Dublin in 2011, was an enormous success. “I started doing this about ten years ago,” said Solus. “I’d seen a lot of street art from the UK and from here, and so we started wheat-pasting stencils on the street. Small pieces, we used to go out at night and put up messages or whatever, and went on from there. I really enjoyed doing it, so I started to take it more seriously, to practice, so I could be better at it, make it more appealing to the eye.” Solus’ hard work appears to have paid off. “I’ve been granted a three-year artist visa, which is officially titled “Alien with Extraordinary Ability.” He laughs. “And right now I’m doing a mural on the Lower East Side, at Elizabeth and Broome, and probably a few more after the show. Then I’m heading to Chicago for a project. 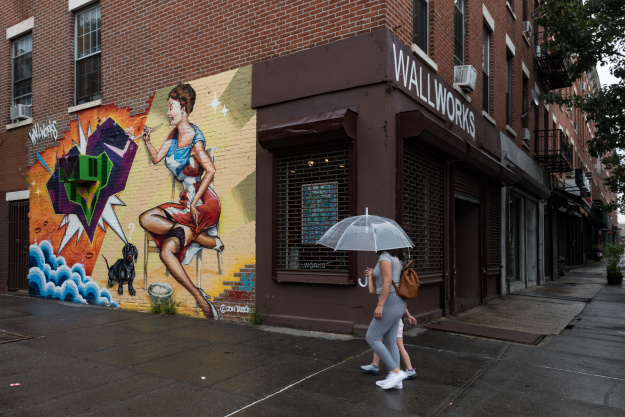 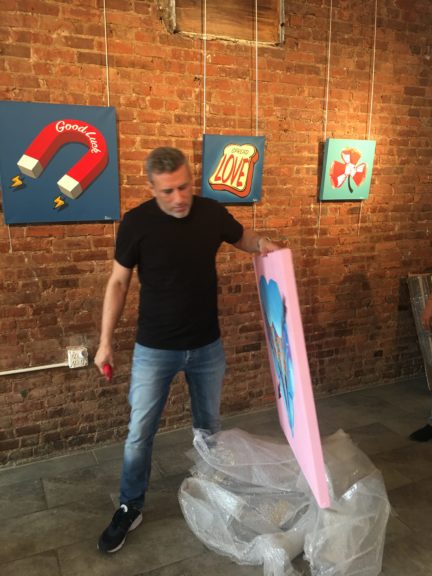 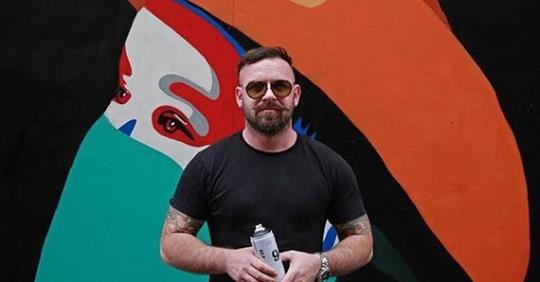 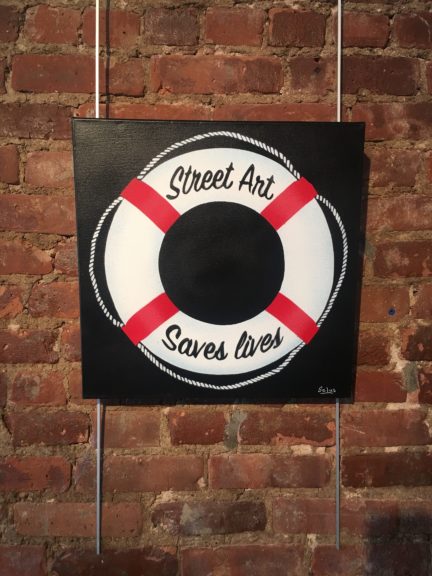 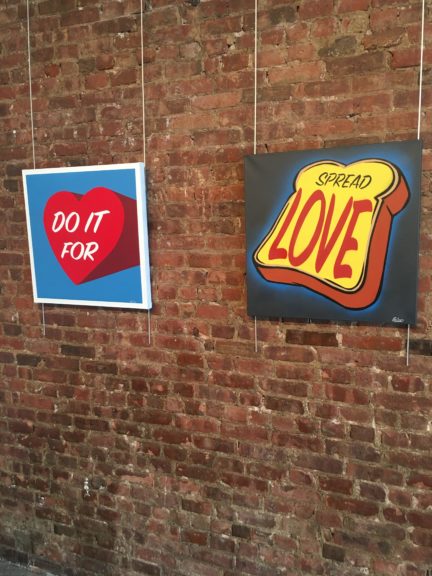 Do It For Love, Spread Love, Solus, IMAGE: Danny Brody 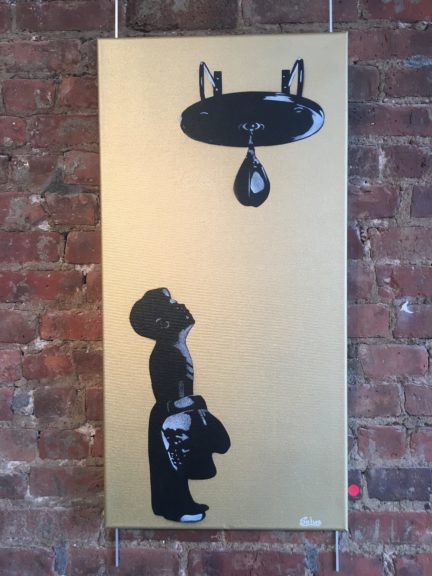 Solus’s most-recognized work is probably the Joey Ramone mural that for two years covered a wall nearby the former CBGB’s location. “It was the forty-year anniversary of the Ramones when we painted it,” said Solus. “I had met John through Wayne Rada at the L.I.S.A [Little Italy Street Art] Project, and we collaborated on the mural.” The canvas version of that collaboration hangs at Wallworks for this show, and it is in some ways an illustration of the artist’s philosophy. “It’s a common theme that runs through my work,” said Solus. “A positive message, overcoming obstacles, like the little boy looking up at the speed bag (above). It’s a message of hope, it’s what I hope to achieve.” 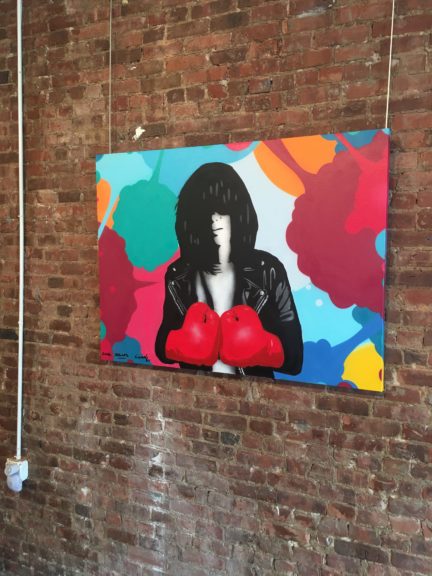