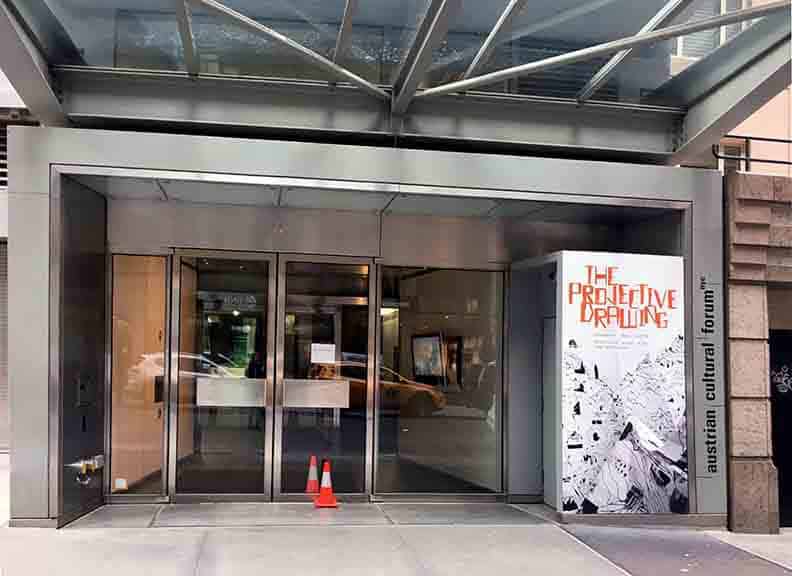 A jewel of the midtown area, the Austrian Cultural Forum is to be found at 52nd Street just off Fifth Avenue; one block from the Museum of Modern Art. Housed in a building designed by architect Raimond Abraham and across the street from Cartier, the exhibition of terrifically inventive and entertaining works on paper ranges across three levels in the building just beyond the lobby. The installation itself is a projection of works by 10 artists, 5 of whom have Austrian ties, by curator Brett Littman in collaboration with the ACFNY. Littman’s idea for the selection of works, responds to architectural historian Robin Evans text The Projective Cast which examines how we “see” and experience architectural spaces. Of the 10 artists in this exhibition Brigitte Mahlknecht’s fascinating “Fast Architektur” series in wax crayon on primed paper, Seher Shah’s 6 part drawing meditation on perspectival ambiguity, “Flatlands (corner)” and the set of watercolor and pencil on paper studies by Katrín Sigurdardóttir that feel like underwater visions, are most evidently concerned with representing structures we associate with buildings and architecture.
The diversity in the installation of each artist’s work makes seeing the whole show an unfolding discovery. Leopold Strobl’s small framed collages are arrayed in two lines of five at a corner and spotlit in a space that is painted black; there is a delightful mystery in the ubiquitous black entities that appear in them. Lionel Favre’s charming wall drawings travel through several levels by stairway; titled “I’M-MIGRA-GINATION” his imaginative scenery includes a hot air balloon that seems to be lifting an emergency light fixture next to an EXIT sign. Simona Koch has developed a work in progress titled “Mycelium of Humans #1” which is a genealogical study of great complexity arranged in rows of diagrams displayed in a floating case. Above and to the side of the case are representatives from two series of drawings by James Sienna. In one set the drawings grow, plantlike across the surrounding matte of their frames. On the end wall in a selection of “Manifold” drawings, dense interlocking figures form holes in lines that seem to have their own DNA. The hypnotic patterned panels by Sara Flores and the Shipibo Conibo Center take their genesis from the Peruvian Amazon jungle. Executed in natural dyes and pigments harvested from the jungle by Flores and her mother the panels are joined by ambient sounds from the jungle and a live microphone for visitors to interact. Delightful mixed media collages by William Cordova are titled “transmissions: a more radical elsewhere” the title derived from Deleuze’s book Cinema 1: The Movement-image depict assembled objects including radio receivers, film canisters, microphones, cement blocks and clouds of words. “The Great Noise” is a physical being that is formed in the air; each iteration is site-specific. Hundreds of India ink drawings on enormous expanses of the light malleable paper include images of houses of all styles and rock formations in valleys, which hang in shaped walls of paper by Judith Saupper. 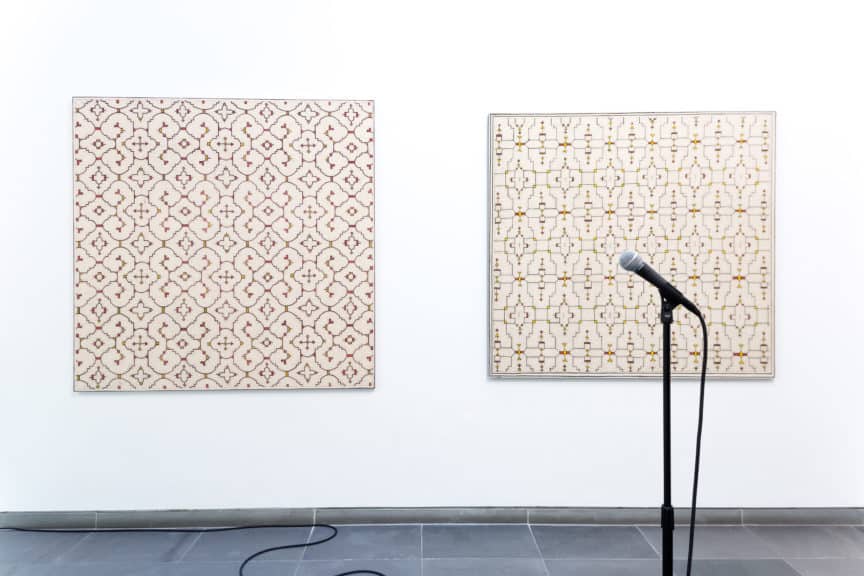 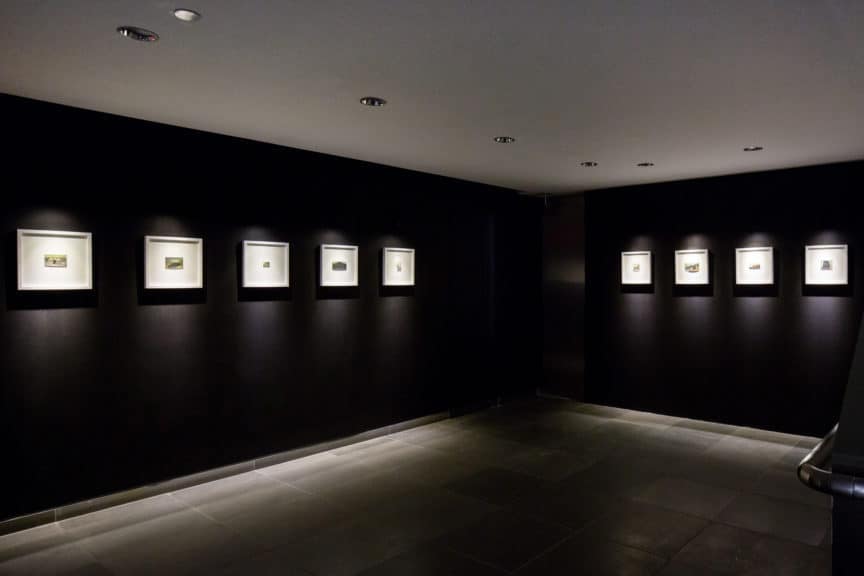 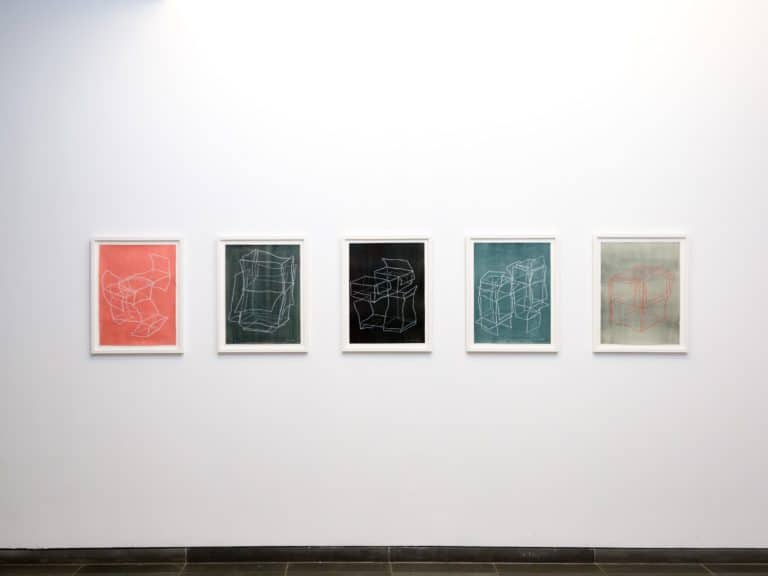 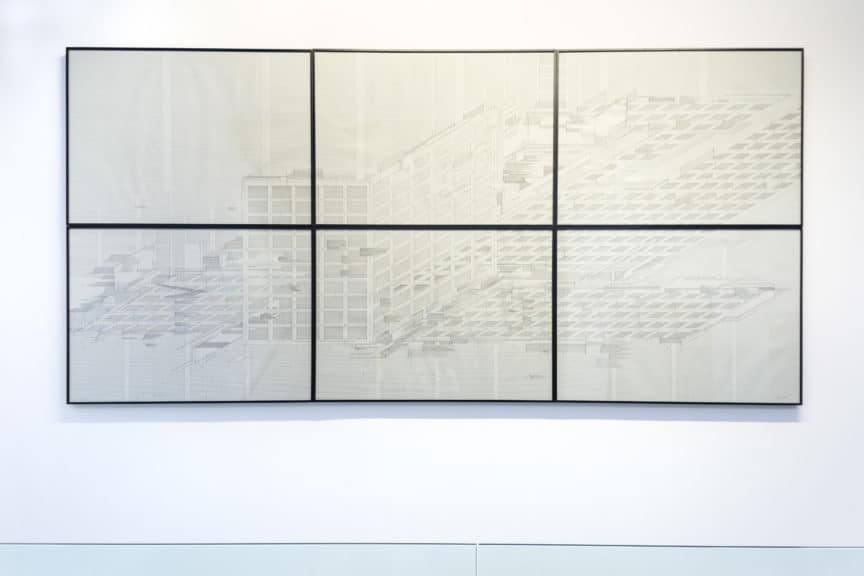 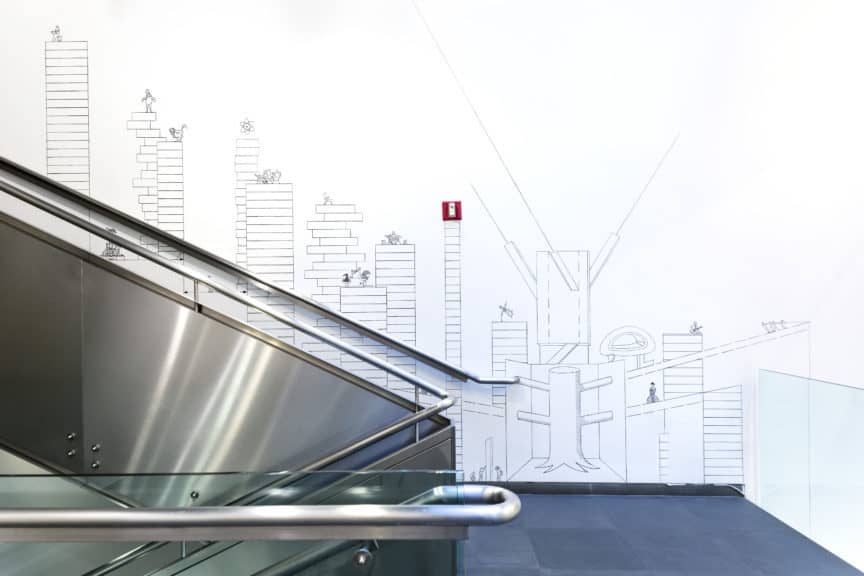 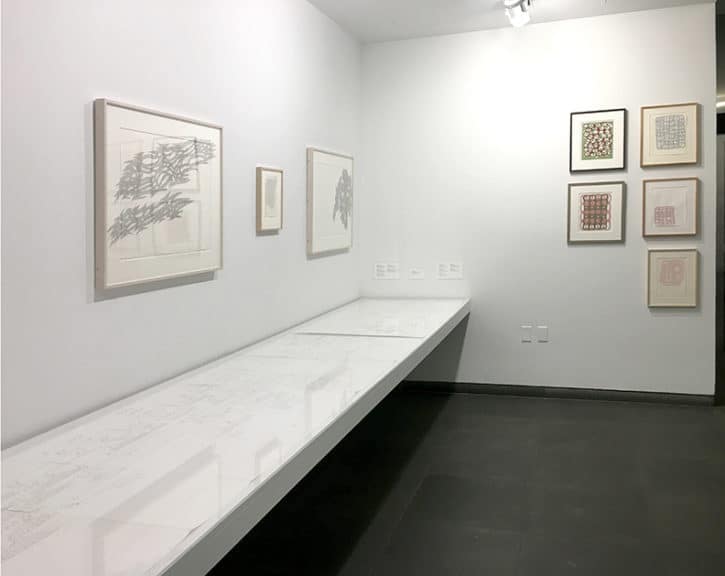 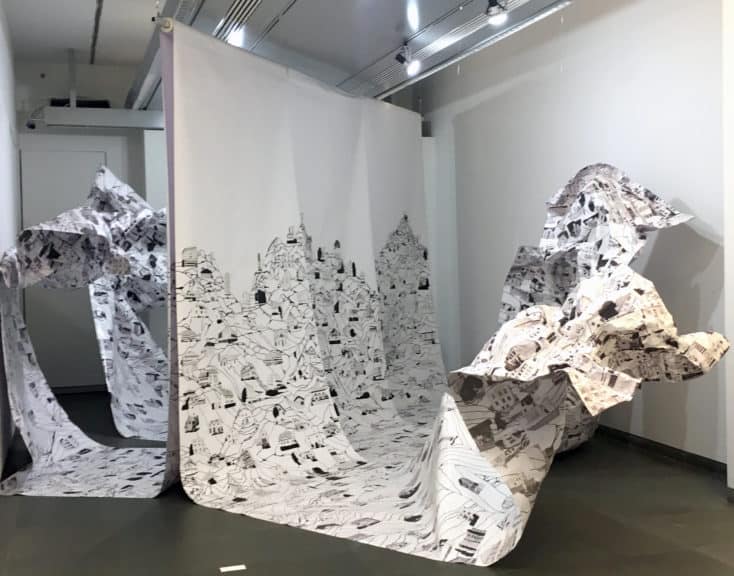