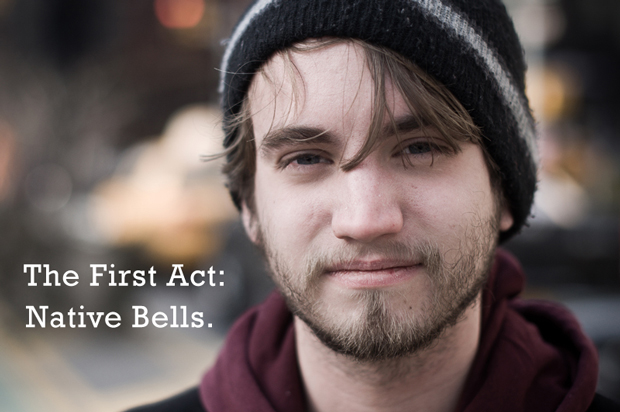 Have you ever listened to a song that made you feel like you could be either raging it, or sitting quietly pondering life, the universe and everything? “Lost in the Sky” by Native Bells is such a song. It’s the kind of song I blast in my headphones without regard for the health of my ears or the musical taste of those standing near me. Like much of Native Bells’ music, “Lost in the Sky” is a precisely poignant piece of perfectly executed musicianship.

I had the great pleasure of meeting the man behind the act earlier this month in New York City: Mr. Sean Smither. Sean is a genuinely talented, truly humble individual who is both a lover and master of his art. We sat at a cafe in Union Square for nearly two hours discussing his music, the New School, the visceral experience of listening to music on vinyl, and many, many other things.

Native Bells’ sound is a unique blend of jazz and punk, and at times, folk. It’s difficult to classify the sound plainly in terms of genre. It is safe to say, however, that Sean’s jazz training is at the heart of everything he produces as Native Bells. Listening to his music, it’s difficult to imagine that one person is playing all of the instruments, but after talking to Sean and listening to his quiet enthusiasm, the scope of his knowledge and talent is without question.

I implore the reader to visit the Native Bells bandcamp page immediately and start listening. I am tempted to tell you to finish reading this column later after you have made your way through the albums Lost in a Dream, Vol. 1: REM, Lost in a Dream, Vol. 2: NREM, and Aurora. I will resist that urge, as you will find three singles scattered within this piece: Raspberry, Lost in a Dream, and Lost in the Sky, as well as the highlights of an interview I conducted with Sean via correspondence over a two-month period.

With great enthusiasm and more excitement than typed print can demonstrate, I present to you, dear readers, Native Bells.

How long have you been playing music?

“I’ll guess about 11 or 12 years. Whenever I started taking piano lessons. I always forget.”

“Technically, I study jazz performance (drums) at the New School for Jazz and Contemporary Music. However, I devote nearly all of my time to studying music theory and am in the process of applying to graduate programs in music theory/musicology.”

What is/are your primary instrument(s)?

“My primary instruments are piano, drums, and guitar. Go figure. I don’t really consider myself a pianist, or a drummer, guitarist, bassist, multi-instrumentalist, composer, singer-songwriter, or really anything else. I’ve always had trouble aligning myself with any of those terms and am generally uncomfortable being referred to as one of them.”

Do you play all of the instruments yourself? Are there other people involved in Native Bells or with your music in general?

“I do play all of the instruments. I’ve always been a huge control freak and so I prefer to have every single aspect of the final product under my control (though that’s not to say that I’m not open to collaboration – that’s just not the idea with the Native Bells name.) However, the original idea behind releasing my music under a name besides my own was to obscure the fact that one person does everything. I prefer to hear Native Bells records as though it’s a band I love, not just me.”

You had said that you don’t like “aligning” yourself with terms such as “pianist” and “composer”. If you do not want to be referred to in those terms, then in what way do you want people to see you/refer to you?

“Good question. I guess broad terms like “musician” or “artist” work just fine. I just don’t feel that I fit more specific categories. Not in an arrogant way, as if I transcend category or some bullshit like that, but in a way that if someone was looking for a “pianist” or a “composer” I wouldn’t be able to volunteer myself because I don’t think I’m competent enough in any of those more specific realms, unless perhaps we’re talking about jazz drums. Or music theory.”

Since you play all of the instruments, do you ever perform live? If so, then wouldn’t you have to delegate some parts to other people? Or do you employ some kind of digital setup that allows you to play all of the music yourself?

“I unfortunately do not perform live as Native Bells. That’s certainly not to say that I wouldn’t like to, but it’s logistically difficult since I would need a decently large group of dedicated performers and a lot of time to work out the arrangements.

I’m not interested in the types of digital set-ups that you mentioned. Although I have a lot of respect for performers like Andrew Bird and Kishi Bashi (who use various looping and effects pedals to perform their music alone), I think such setups are mostly gimmicky. Looping pedals essentially record music and play it back – regardless of the control a performer has over it, it’s still essentially analogous to playing along with a recording. To me, that sounds more like an elaborate karaoke performance than live music. A huge part of the power and excitement of live music comes from the interaction of multiple musicians, and that’s lost in that kind of performance.”

In my conversations with other musicians for this column, many have alluded to the idea that album sales shouldn’t be relied on as the primary source of income, but rather playing live as much as possible. How important is the live element to the continued existence of Native Bells? Do you plan to add other musicians in order to make live performances possible? Do you think a music act can gain notoriety or at the very least a strong following without the live element?

“I hope to be able to eventually make live performances possible, especially for the reason you said: Any music act will have a very difficult time trying to gain recognition without a live element. That being said, Native Bells isn’t a source of income for me, nor do I really plan on making it one, and especially not a primary one. I agree with the idea that album sales shouldn’t (and can’t) be relied on. Currently, I don’t even give people the option to pay for my records online. Since I don’t plan on making a living from the music, instead only continuing to make it regardless of my source of income, playing live isn’t actually integral to the continued existence of Native Bells. Again, though, I certainly hope that playing live can become a reality in the future.”

Where do you make/record your music? Do you have a studio that you use? Or do you have all of your own instruments and equipment?

“I make all of my music in my basement using whatever equipment I have. This isn’t exactly a lot of equipment – 4 cheap mics and a recording interface that came with a package from the first college I went to. The rest, however, is my collection of instruments, which is gigantic.”