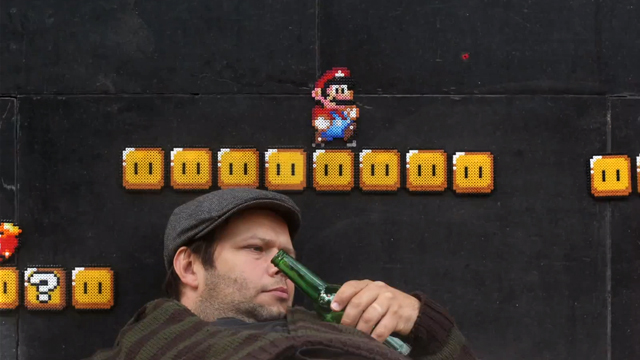 Super Mario Beads 3 is a terrifically whimsical animated film by Marcus and Hannes Knutson. It takes the images and the physics of the classic Nintendo games Super Mario World and Super Mario Kart and imposes them onto realistic backdrops. Throughout the clip, we follow the same pint-sized 16-bit hero we’ve known for years— only this time, instead of lava-filled dungeons and mystical forests, his adventures take him through weed-ridden urban sidewalks and crowded grocery stores.

It’s hard not to notice the contrasts between this little guy’s world and our own. Ours may be grim and earth-toned while his is magical and polychromatic, but he wanders through both with the same resourcefulness, agility and bravado, jumping from ledge to ledge and precipice to precipice without batting a pixelated eye. It’s a striking and even moving spectacle, and you can’t help but root for him. It’s hard to tell whether he’s being brave or just oblivious, but not even the casual indifference of modern life is going to keep our hero from rescuing his princess.