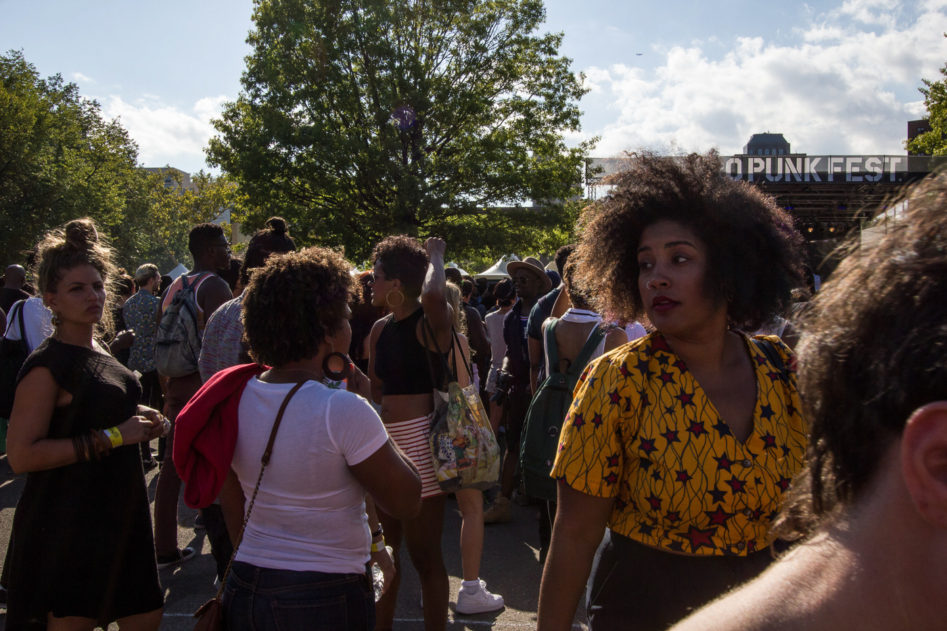 Between August 23 and 24, the colors of every nation’s flag flooded Commodore Barry Park in Brooklyn for the tenth Afropunk Fest.

The lineup was a perfect blend of Punk, R&B, Hip-Hop, Neo-Soul, and everything that permeates and runs between. Every act held some hint of each style in the fabric of their sound from Trash Talks’ thrash punk to Meshell Ndegeocello’s slow-jam space funk. This year’s festival was the definitive live mix-tape of what Afropunk is. The curators of the festival did a fine job putting together musicians that compliment one another. Each act worked within its own specific niche, but yet, no act overlapped in style.

The first act I saw was LOAF Muzik, a four MC collective who rap about everyday problems over retro beats. One song was deemed so gangster by Kidaf that it would make you want to murder your mother. After the audience gasped, he dedicated it to his mom

The beats were heavy and the energy manic. They took advantage of their early time slot to get the crowd ready and riled for a day of in-your-face music. On the final song, Oso Dope threw a crash test dummy dressed like Eddie Vedder into the audience, and then climbed the speaker tower. From his vantage point he could have looked to his right and seen Denitia & Sene, starting on the Green Stage.

From Brooklyn, denitia & sene. were a nice surprise on the Green Stage. Singer Denitia sang incredible hooks and moved fluidly with the electro-soul beats in her sun-reflecting gold pants. The audience was tuned in too, singing and moving to “Casanova” off their album His & Hers from last year. 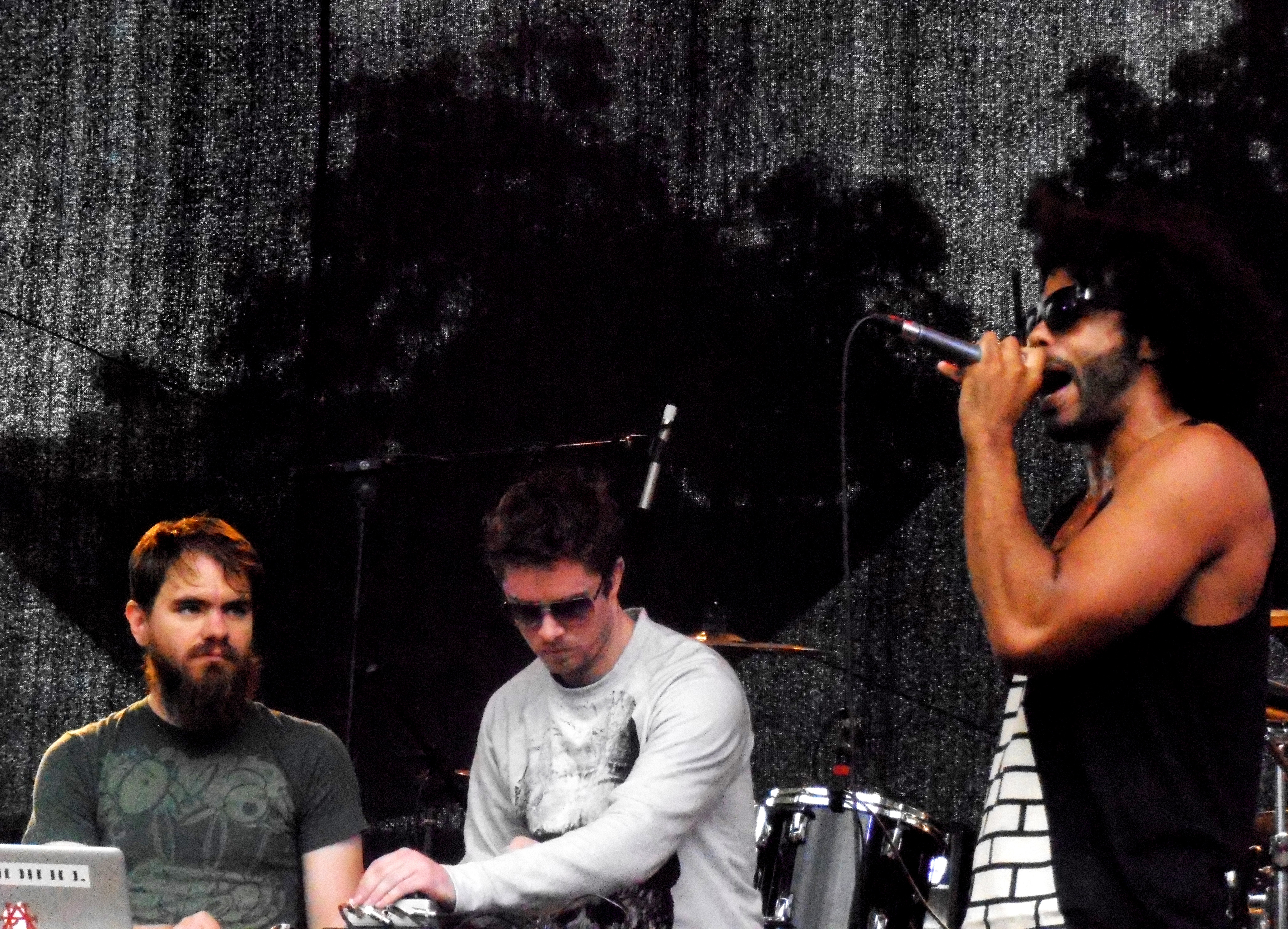 As I approached clipping. on the Red Stage, I heard a mishmash of industrial noise. At center command was the hulking MC Daveed Diggs. He was bulleting out lyrics, crafting the rhythm as he went. His words painted a harsh realism, piling on the finest of details to macabre scenes. Behind him William Hutson (also from Rale) and Jonathan Snipes (also from Captain Ahab) turned knobs and ricocheted clipped samples off each other adding dark sonic energy to Diggs’ visions.

Their set ended with a new song that was written in response to the disconcerting events of police ineptitude in Ferguson, Missouri. Diggs railed against the blind brutality of the enforcement as the sound of threatening pounds on a front door provided the rhythm and startling gun shots rang out.

Throughout the weekend the events in Ferguson weighed heavily on the hearts of some performers and many in the crowd. A call and response of “Hands up, don’t shoot,” could be heard often and a poster with those words written on it served as a backdrop for many photographs. Thankfully, the NYPD officers overseeing the festival paid no mind to the verbal attacks on their brethren and ignored the constantly billowing plume of glorious weed-smoke throughout the weekend. Good on them. The atmosphere was nothing but cordial each day. 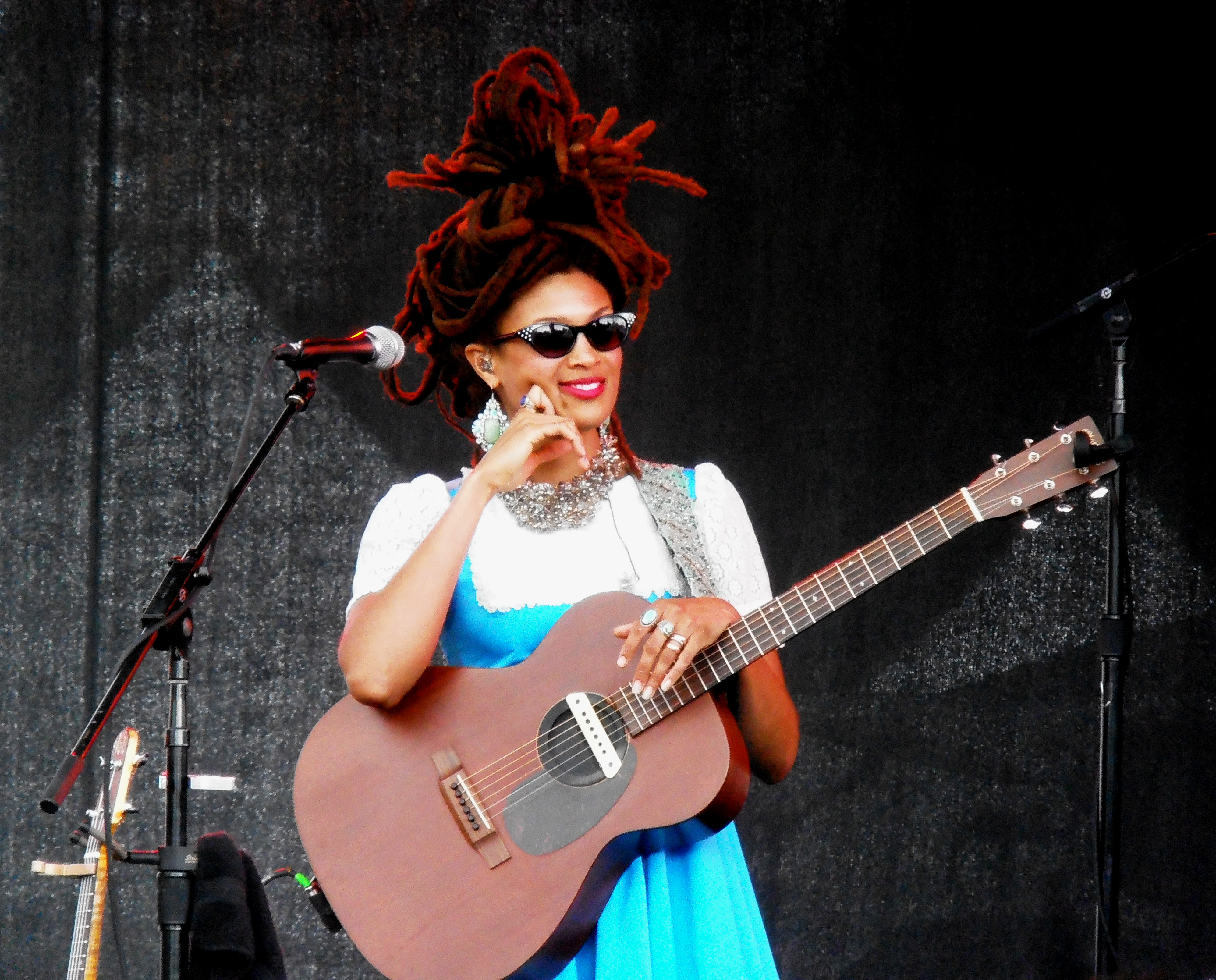 Next was Valerie June from Tennessee–possibly the exact opposite of clipping. She came out in a baby blue and white-embroidered country dress with her hair piled high on her head. The very moment her high-pitched zinging voice hit the microphone, she had the adoration of the crowd.

She played from her fourth album Pushin’ Against A Stone released last year to widespread acclaim. Her songs were a direct transport to Southern back porches, rocking and languid, introspective and empowering. “This is my baby,” she said raising a banjo in the air. “She wants to be a big star.”

Before Shabazz Palaces took the stage, the announcer could only muster the word “magical” to describe the sound. After an almost-too-long introduction, Palaceer Lazaro and Tendai “Baba” Maraire walked to their station.

The music swirled around the stage like pieces of debris locked in orbit.  Maraire sat to the right of Lazaro, two bongos draped in an orange patterned cloth, a microphone, a hi-hat and floor tom before him. He would smack the bongos full-palm, or lightly with his fingertips and ring little notes from them.

They played songs off Black Up and this year’s golden release, Lese Majesty. Lazaro’s lyrical delivery was snappy and charged, but the content was laid back, in search of pleasurable vices in a world of decay. His words could be meticulous, but also utterly simple. On a few songs the ladies of THEESatisfaction added harmonies to their psychedelic stew.

Shabazz Palaces are the hip-hop equivalent of Sun Ra. The duo have drifted into a space few others in rap have gone. 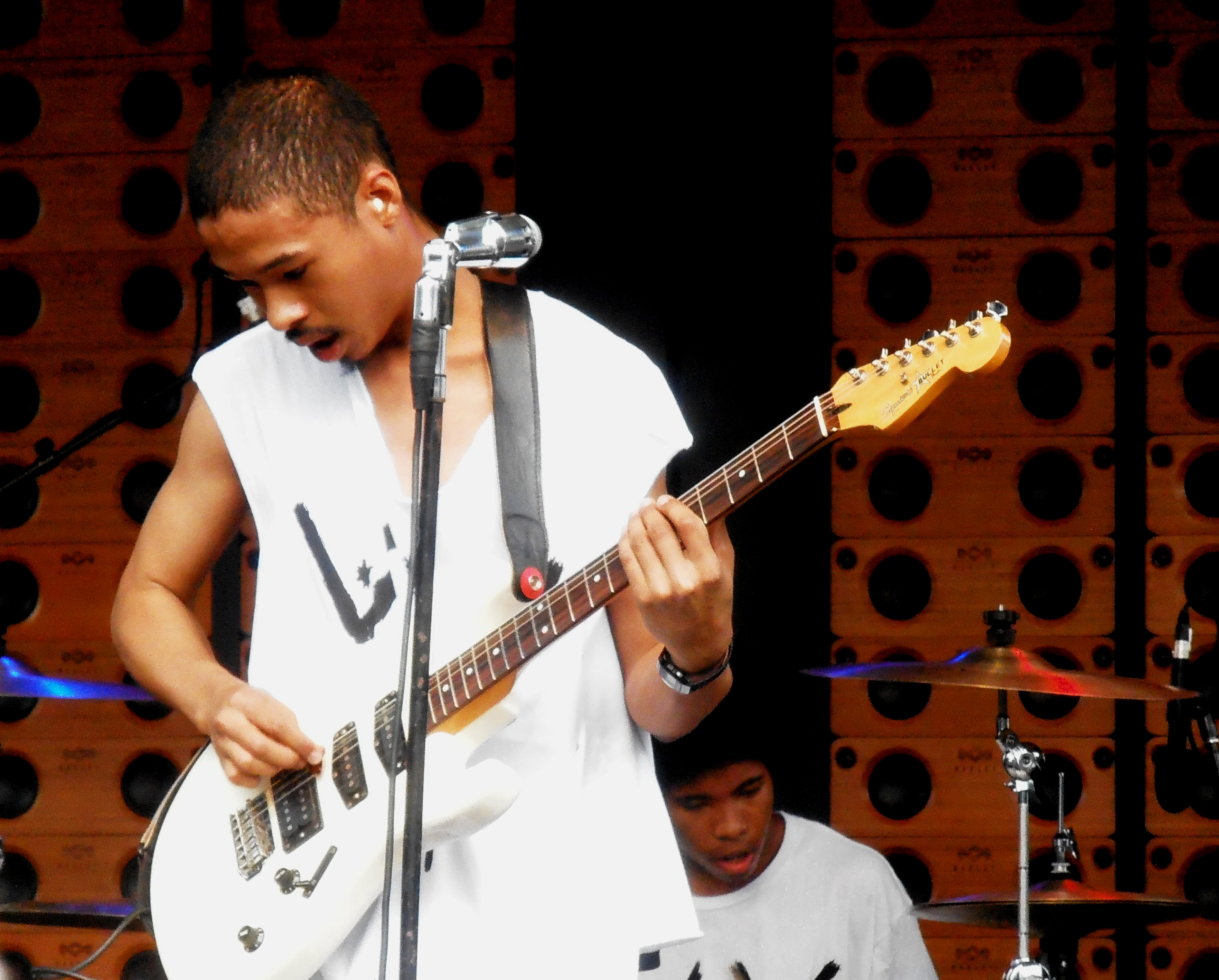 Another surprise was The Bots, a two-piece punk rock deconstructionist act from Los Angeles. They relied more on their physical power and energy than they did song structure. The singer Mikaiah Lei bopped around the stage halfway between a mid-air somersault and a belly flop while singing about everyday teenage  monotony. The Bots are the kind of punk rock that is fueled purely by boredom. Their newest full-length album will be released on Fader Records later this year.

Some confusion came with the anticipation of Trash Talk. At their scheduled time, the group Fame School were introduced, causing many in the crowd to wonder if they got the details wrong. In a brief panic I left to see if Trash Talk might be on another stage. They weren’t.

When I returned all I could see was a morphing blob of human beings, each one stuck in a perpetual whirlpool of bodies. Yes. Trash Talk was here. After the second or third song, singer Lee Spielman jumped down onto the pavement and inserted himself in the middle of the crowd. “That’s why they give me a long mic cord,” he said breaking the fourth wall and standing within inches of my face.

The whole of the mosh pit spiraled behind him. He demanded a circle pit to form around him and from that point chaos struck. A man dressed as a cow was tossed around, cigarettes went ashing, silly string sprayed, someone lost a phone cord, someone lost a shoe, and at some point records spun up and into the crowd.

When I saw Spielman next, a swoop of blood dripped from his forehead. In one of the greatest displays of influential frontman power, he ordered the entire crowd, spastic and looking for things to burn, to sit calmly on the ground. And, after a massive dogpile, nearly everyone did. As the band played, he knelt and screamed the lyrics above everyone’s heads. Eventually the stillness couldn’t be sustained and people started to stand. Spielman remained in the middle, the cut eye of the storm.

For the last song he ordered everyone to run as fast as they can in the opposite direction to catch Bad Brains on the Black Stage. Surprisingly, everyone did. Eventually, everyone had to. I ran like I was being chased by a pitchfork-wielding mob. When I couldn’t move forward anymore, I looked up and there was Dr. Know, Darryl Jenifer and Earl Hudson. Bad Brains.

They were introduced by Chiara de Blasio, the mayor’s daughter and longtime Bad Brains fan. Her papa, Bill, watched from the side.

They started with a song in honor of the late Beastie Boy, Adam “MCA” Yauch, who produced their album, Build a Nation in 2007.

Their performance was loose, switching between their raw punk classics like “Sailin’ On,” “Reignition,” and “Attitude,” to their hazy reggae trances. They were without vocalist H.R., but had friends to fill in. Corey Glover of Living Color, John Joseph McGowan of Cro-Mags (who played Sunday), and the rapper Murs all took the mic for a few songs each.

There was clearly some slight, but playful, animosity for being placed on the tight, rutty Black Stage. Bassist Jenifer pointed across the blacktop to the Red Stage where Body Count had begun and lights were flashing. “Maybe we can get on that stage,” he said with a grin. He was just being jolly. During a quick tune-up he said it shouldn’t matter since all of Black Dots was recorded out of tune. “Why can’t we be like Dave Matthews and make a billion dollars?”

By the time Bad Brains finished, it was dark and Body Count’s lean, muscular metal was pummeling the speaker system. The group, founded in 1991 by rapper Ice-T, blasted out songs from their fifth and most recent album, Manslaughter, as well as classics like “There Goes the Neighborhood” and “Cop Killer.” Ice-T proved he was far from the persona of Detective Odafin “Fin” Tutuola, his character on Law & Order: Special Victims Unit. He lambasted police brutality and explained his derision for “the pussification of men” in today’s society. He wanted the audience to put up a fight. By the tone of his voice, he was ready to take every individual on, uniformed or not.

After adjusting to nightfall, I found my way to the cool, grassy area and claimed a spot for Sharon Jones & The Dap Kings.

After The Dap Kings unloaded onto the stage one after the other for a true introduction of showmanship, Sharon Jones bolted toward the middle. Given the short time slot (the only real downside to Afropunk), Ms. Jones and her group went to work squeezing an entire revue into one crisp hour of entertainment. The horns pumped and the drums swung.

Jones moved like she was single handedly trying to rescue us from an oncoming flood. Her black sequin-layered dress whirled with each swivel of her hips. She did her best Tina Turner impression, introduced her band, gave thanks, and at one point brought a dancing fan from the audience onto the stage.

The fan seemed totally flummoxed by the offer, unable to compete with the hips of Ms. Jones. She kept it up the whole song–at least three minutes–swinging, twisting, corkscrewing up and down, right in front of the guy. All he could do was smile widely, a little uncomfortably, and wish he had half the moves she did to compete.

Jones was in a hurry to make us feel good about our lives. She had an exorcism on the cancer that almost took her life last year. She gave a rousing thank you to her fans for their positive energy during her time battling, and she sent it right back to the crowd, making us all feel like survivors.

But Jones wasn’t finished there. For the final number she brought on stage all of the female performers of the night to participate in a loose dance-off. In twos, the women twirled one after the other across the stage, with Jones positively enforcing their every step. Sharon Jones is one of those people who you see live and come to understand that she was born to perform. The stage is the place that makes her most happy and all she wants is to share that happiness with her audience. If you hadn’t yet danced during the day, Ms. Jones made it her duty to move the ground beneath you.

Artist I’ve Listened to Most Since: Shabazz Palaces