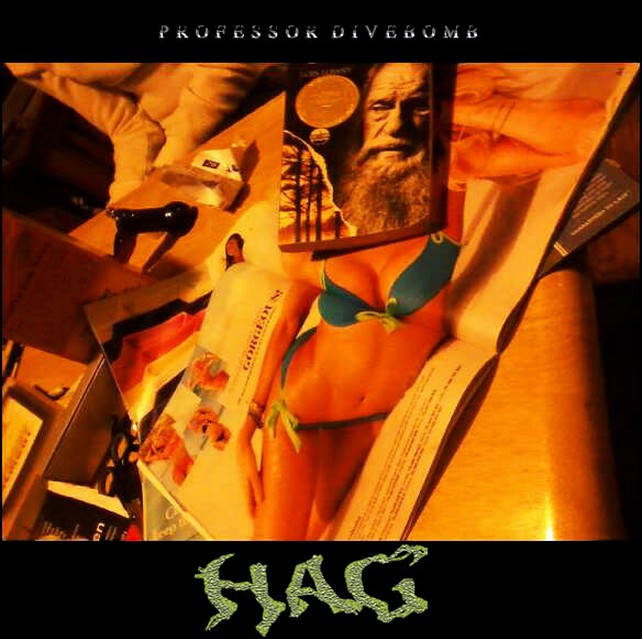 HAG, the new album from psychedelic, lo-fi artist, Professor Divebomb, is a swallowing cave of loose and disgruntled sound. It’s noisy and harsh, but also hypnotizing and druggy. The 16-track album is 44-minutes of swelling sonic carnage and curving tunnels of dark noise. It’s unpredictable and experimental in the most far-fetched meaning of the word–a weird record of doomed psychedelia.

HAG was self-released in October on Professor Divebomb’s Bandcamp. Three EPs, Bynes, Greyg V and V Ceiling, were released in the preceding months. Divebomb’s last full-length was Greengold Workshop in 2010. According to Bandcamp, “Divebomb…carefully manipulates the sounds discovered in a plastic PC mic and from broken down keyboards, drum parts, punk dishes, etc.” The project, in that sense, is very experimental. It’s not songs you’re hearing, but manipulated and compressed sounds threaded together. Sometimes they interlock in strange, haunting harmony, and sometimes they do not, and a ruptured note sparks loudly.

The tracks on HAG are mostly made up of cut loops and scraps of found sound with a garnish of hasty keyboard and guitar. First track, “Bald Oattern,” stretches slowly out creeping along with bells freezing and ringing against a walloping low-end tide. It’s a calm, indeterminate wave to the beginning of a very off-kilter junkyard of an album.

“Huge Tongue” and “Intestinal Track” barrage the ear canals. Fortunately, neither run over two minutes and work more as padding to the greater whole. HAG doesn’t flow like a stream, but more like a churning, stagnant swamp of sound. “Thread Of The Noose,” which sounds like a plank of metal slowly coming alive, is too warped for comfort. Divebomb’s lo-fi recording technique can, at times, show a few scars.

When everything runs together in fluid embrace, though, it’s a drooling, incompetent experience. A prime example of this is “Saliva Of The Tooth.” Held down by a wonky boom-clap beat, the song is loopy with hypnotic guitar strands that summon until it drops off into a slur of syrupy sound trails.

“Faces Of The Ceiling” rides low on a meandering down tempo beat until melting into another time frame. Wounded feedback circles around the brain on “Dark Penetrations” until an avalanche of rigid guitar limps into the abyss. The two together make up HAG‘s Bermuda Triangle. The raw vibrations make glossed-over eyes fall directly to the back.

The recordings are sparsely peppered with cut-and-paste audio particles from muffled nobodies. The scrambled dictation offers the only phraseology on the album and it injects strange visions. The voices are lost, poking through the noise. On “Slow Tattoo” an echoed organ walks in the twilight, pierced with snippets of hooting and hollering. It’s two minutes of serene buzz before crashing and morphing into “Plastic Bag,” a collapsing structure of chopped noise and harrowing inverted guitar.

The final track on HAG, “Blood Of The Hoof,” drips like morphine through an I.V. with a loop that freezes you in place. It’s a welcomed breather after an album of scatter-shot sound lacerations.

HAG is available for stream and for download, with Art Of The Hag, at Professor Divebomb’s Bandcamp page.