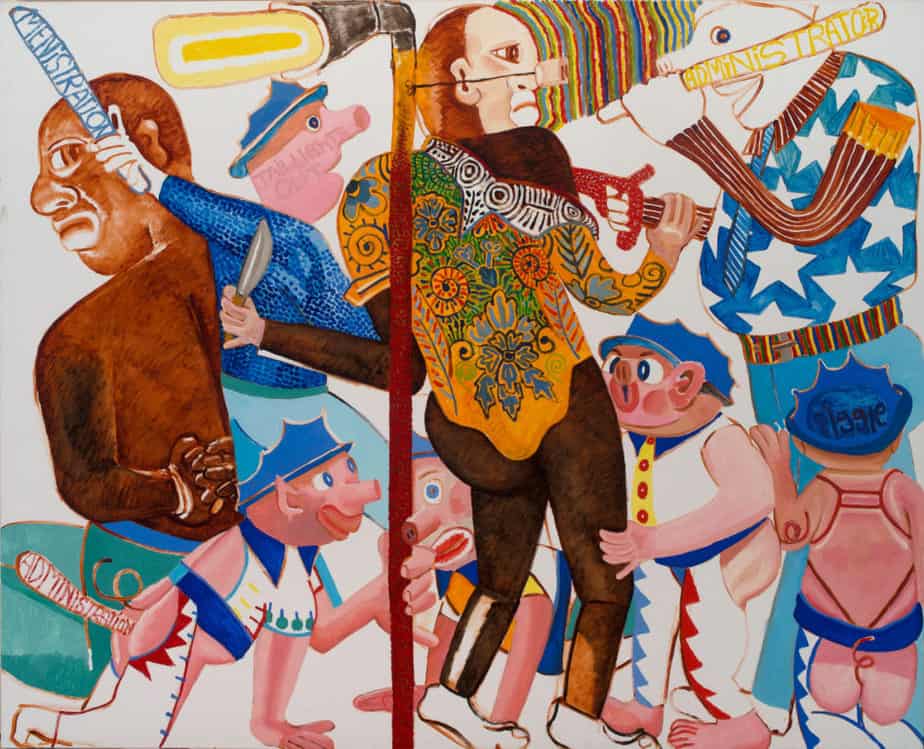 Artist Peter Williams is just not having it. In his one-man show, “With So Little To Be Sure Of”, at the CUE Art Foundation Gallery in Chelsea, the work, with titles like “Mass Murder”, “Sandra Bland”, and “Untitled (Pig on Pig)” screams off the canvases like a man who has been flayed. The police officers portrayed by Williams do nasty things, and are called “pigs” and depicted as such, reflecting the ongoing brutality of the police, especially in communities of color and the poor. And the black bodies are yelled at, tormented, and abused. 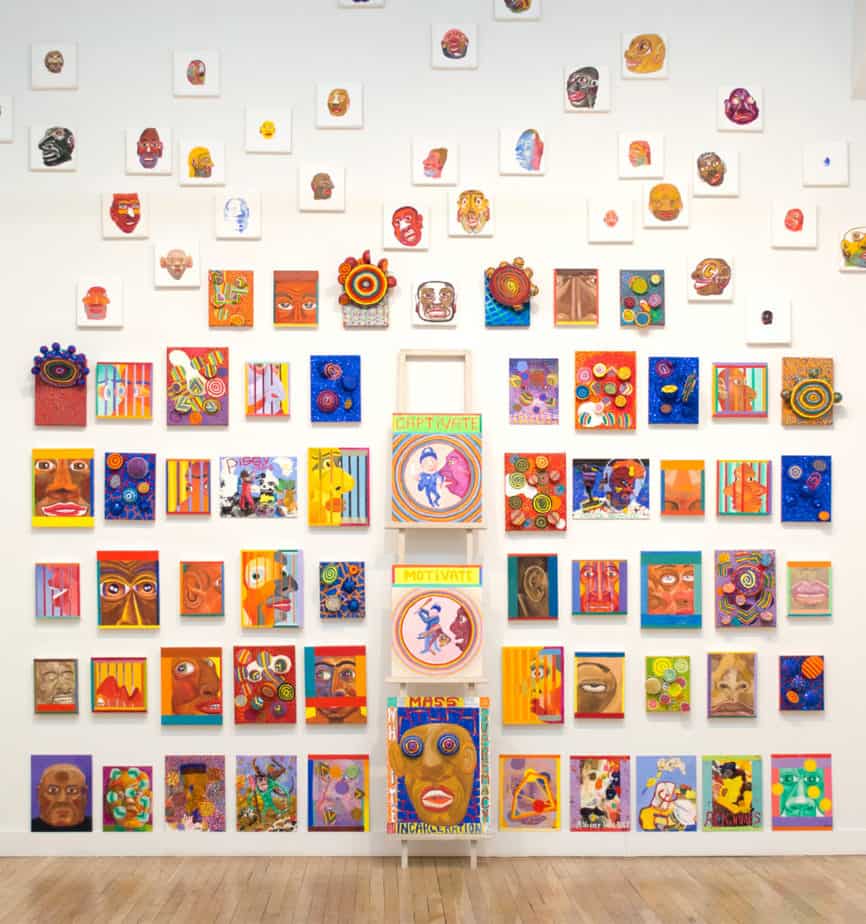 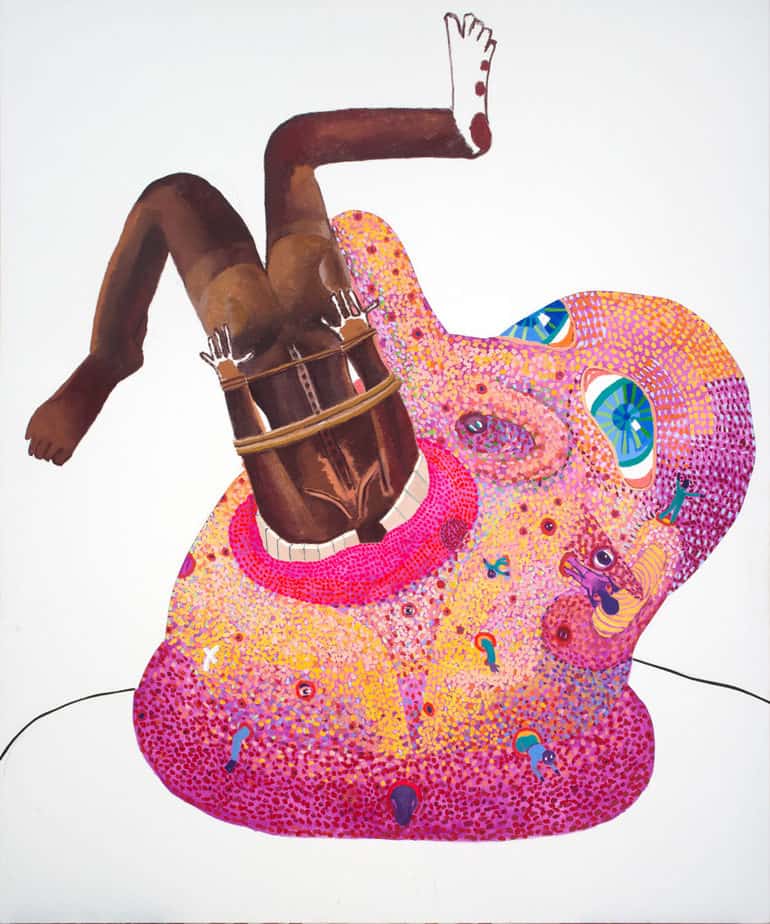 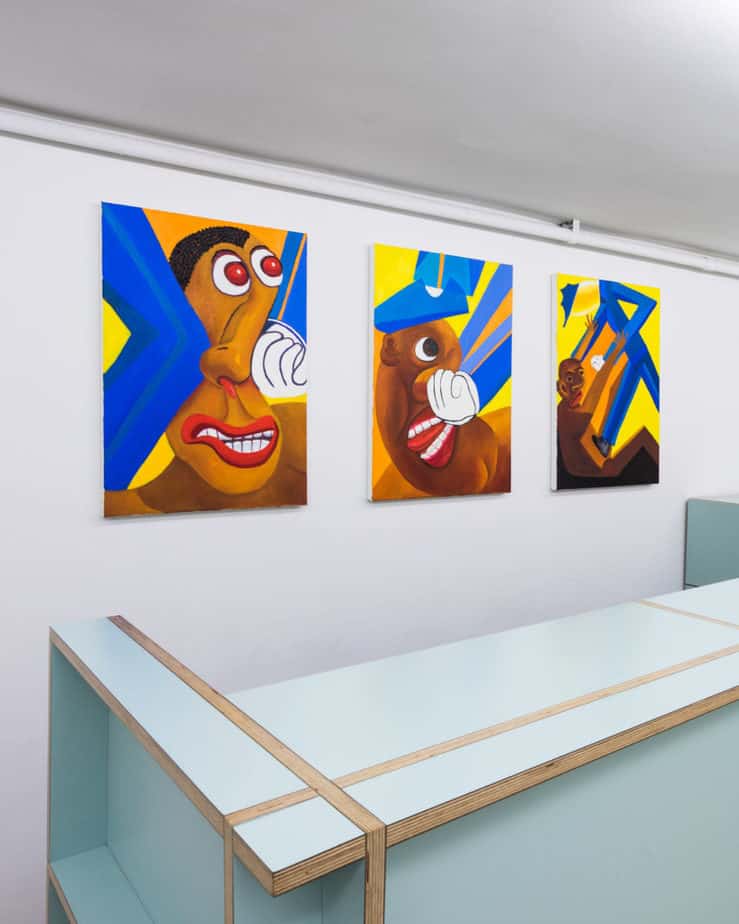 “The work is about the kind of racial identity and construction that minorities have to deal with, and engage in, in the politics of the environment right now,” he said, “and it’s pretty difficult to make art about nothingness. I feel a real strong passion about being involved in the time that I live in, and bearing witness to some of what’s going on on some of these issues, and not focus on the commercial end, but focus a little bit on the art and the politics.” 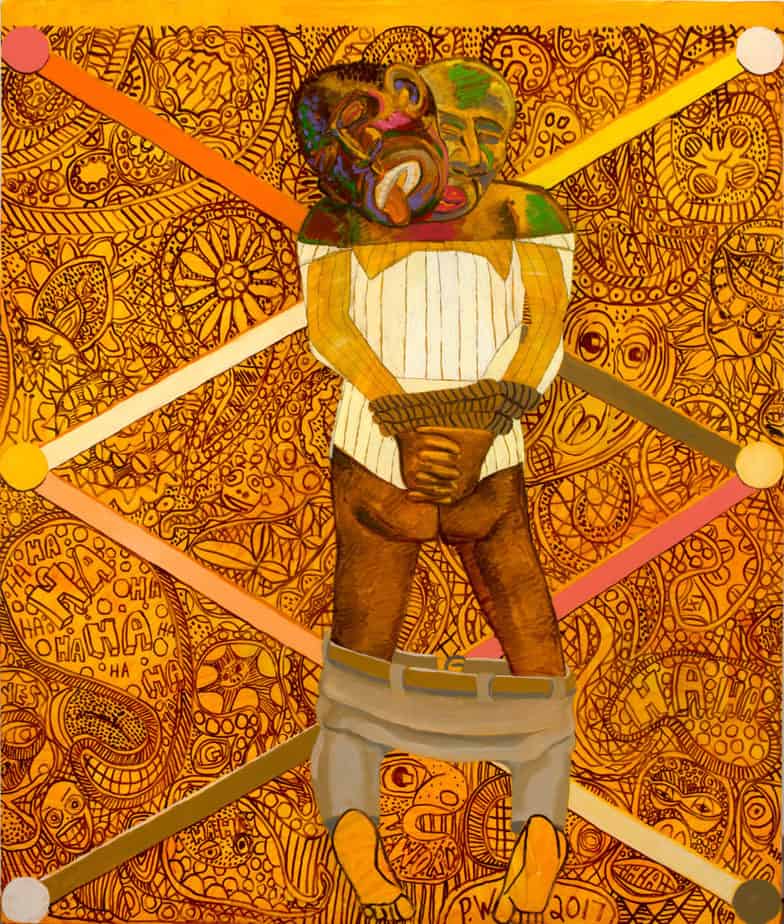 According to the curator, Larry Ossei-Mensah, “Peter is very committed to his work. He’s a painter’s painter, and I was taken aback by the amount of work he accomplished in a very short time.” Williams’ work was the winning selection from the CUE Foundation’s 2017-2018 Open Call for Solo Exhibitions, and Ossei-Mensah was a panelist on the jury who also became the Curator-Mentor for the exhibition. “Pete wanted people to be moved,” said Ossei-Mensah, “to feel a need to take charge and reevaluate.” 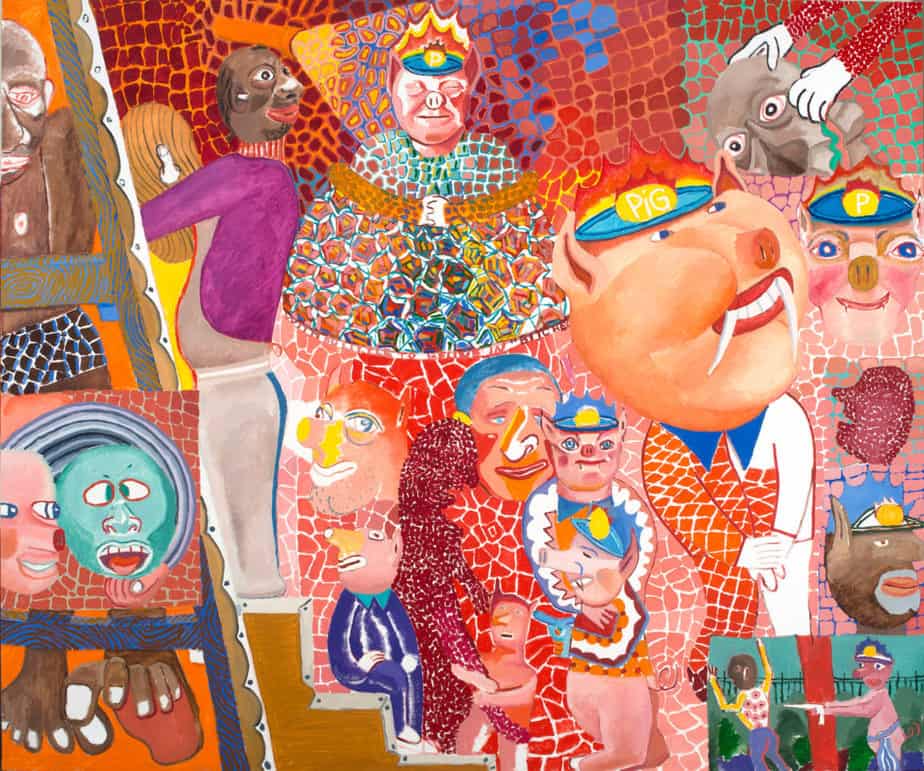 Williams wants to confront the collective forgetting in the United States. “Look, it’s historic,” he said. “You had slavery, so slave catchers, which are now the police, which has led to mass incarceration.” He brings up Stephon Clark, the unarmed black man who was shot 20 times by the police in his grandmother’s backyard in Sacramento. “It’s hard to think of what might happen,” Williams said. “It’s scary! No more of this ‘someday we will all be equal’ shit! We need to get the money up front!” 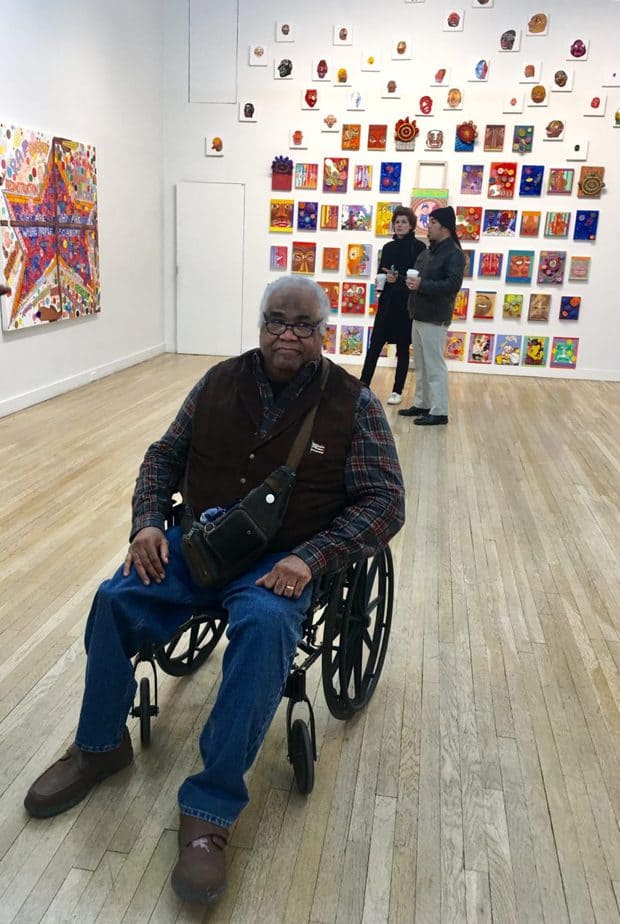 Peter Williams at the gallery, with Mass Murder, and Mine (on the left), Image: Danny Brody

A few years ago, social media started to transform Williams’ opinions. “It changed what I saw,” he said. “I realized it wasn’t a few incidents of murders against black people in this country, but a constant barrage of things attacking people of color and poor people in general, and I really felt moved by it.” He believes it is a repetition of what has happened in our past. “It’s horrible what we’re doing to each other,” he said. “I tried to make a declaration in this work, that this horror is not superficial. It’s reality, and it’s all constructed out of the cloth of this country. White supremacy has got to come to its own end, or history might not be so kind to those who perpetuate it. And they are going to pay a price.” 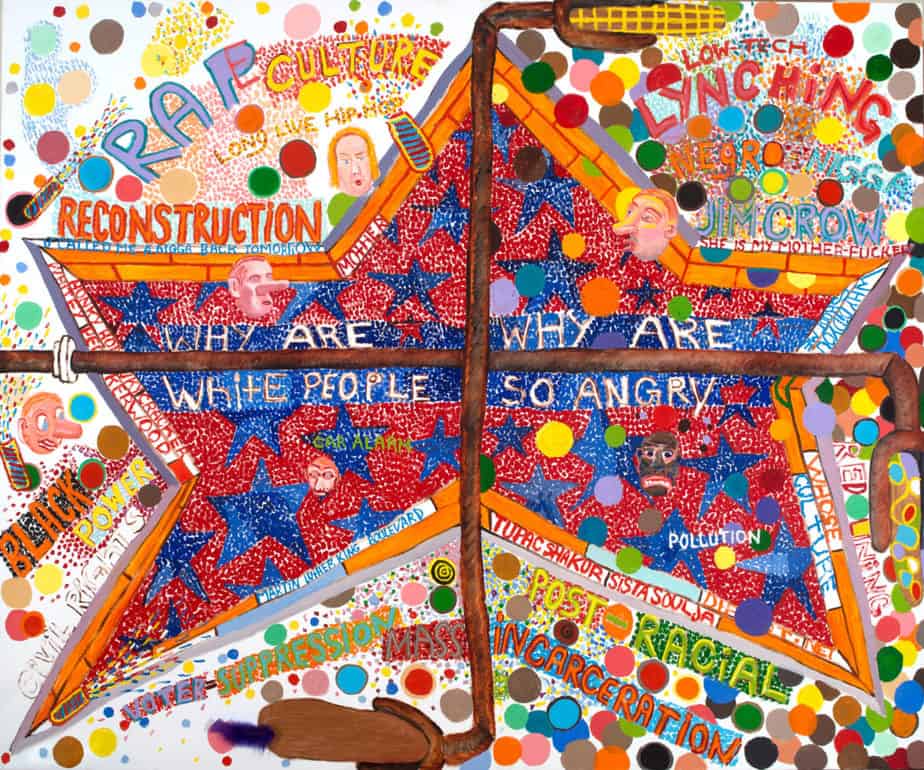 Williams, whose work is in the Whitney, the Walker, and the Detroit Institute of Arts, here paints with bright colors, long brushstrokes, and pointillist dots, creating something like a burlesque of beatings and degradation. “I borrow from high and low,” he said. “Slapstick, movies, TV, comics, cartoons. The history of racism is in cartoons. We’ve all got these caricatures, Asian, Jewish, Latino, black, makes people comfortable in their own hate. We’re supposed to smile and tap dance, but maybe tap dancing on their heads will wake them up!” 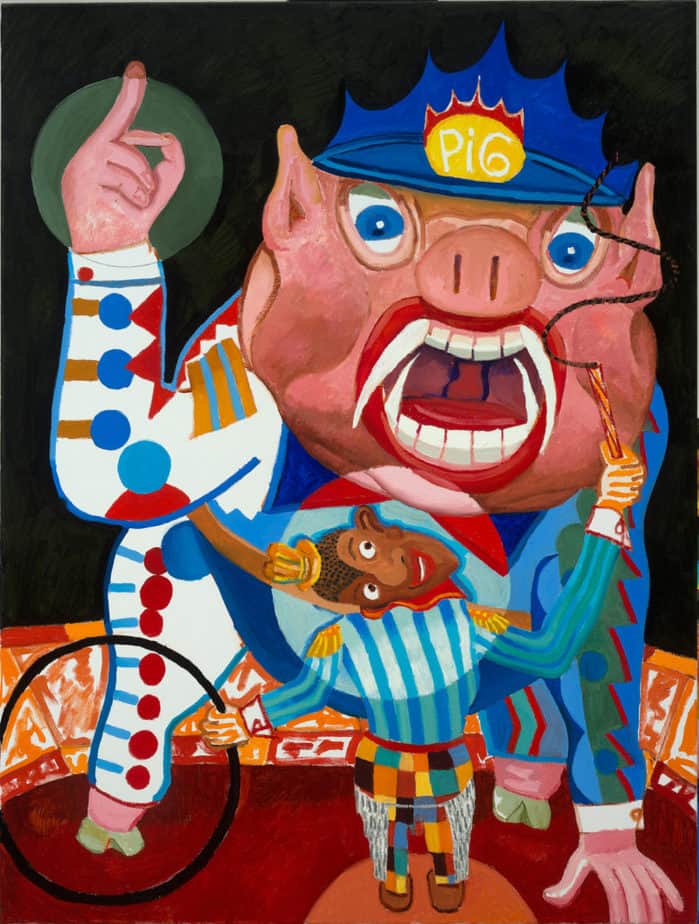 Williams’ show at the CUE has been extended to March 31, and his work is also currently included in the group show, “Soul Recordings”, at the Luis De Jesus Gallery in Los Angeles. He plans on another solo show in Los Angeles in 2019. “Art’s all about politics,” he said, “and I have a strong passion for both.”