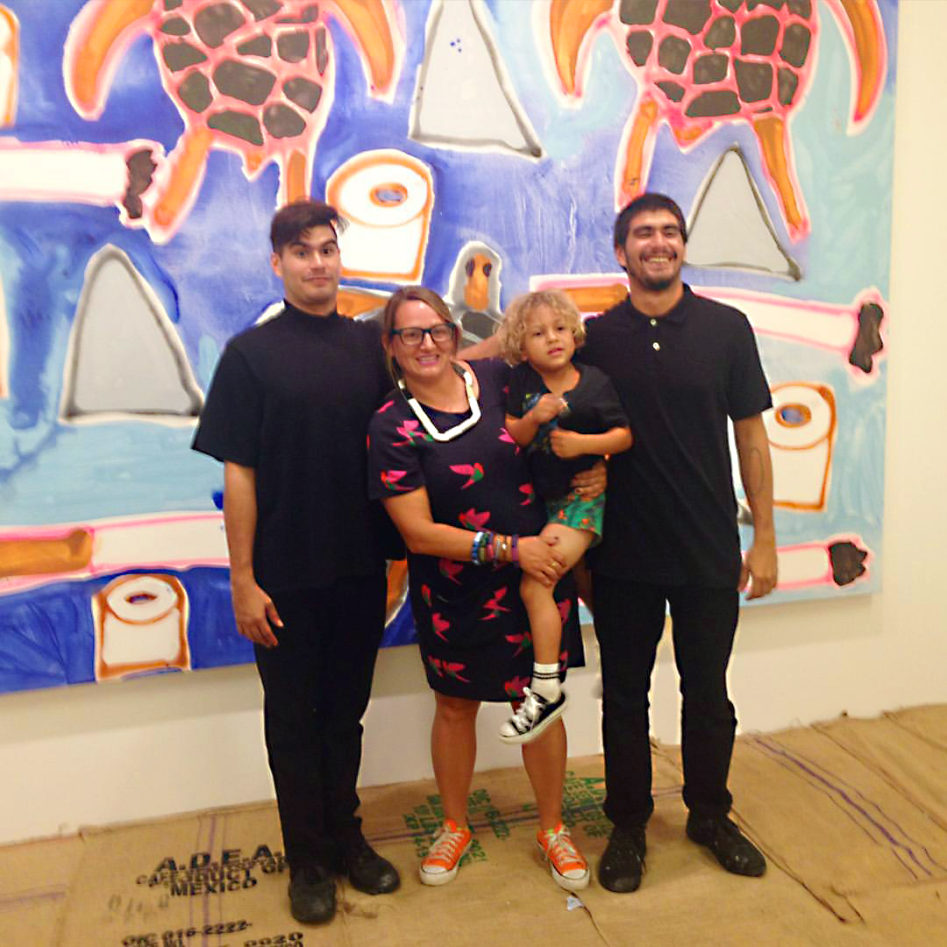 Katherine Bernhardt’s latest solo exhibition, ‘Pablo and Efrain’, opened on September 9 at Venus Over Manhattan in New York. Bernhardt, a St. Louis native who is Brooklyn-based,  is best known for her quirky fashion portraits of supermodels from glossy magazines, but also cleverly animates everyday objects like cigarettes, sharpies and boomboxes in a very playful manner. In her recent series ‘Pablo and Efrain’, Bernhardt continues creating whimsical canvases depicting island life –  replete with sharks, turtles, toucans and lush fruit. The exuberant works radiate off the walls with their vividness, warm colors and charming subject matter. 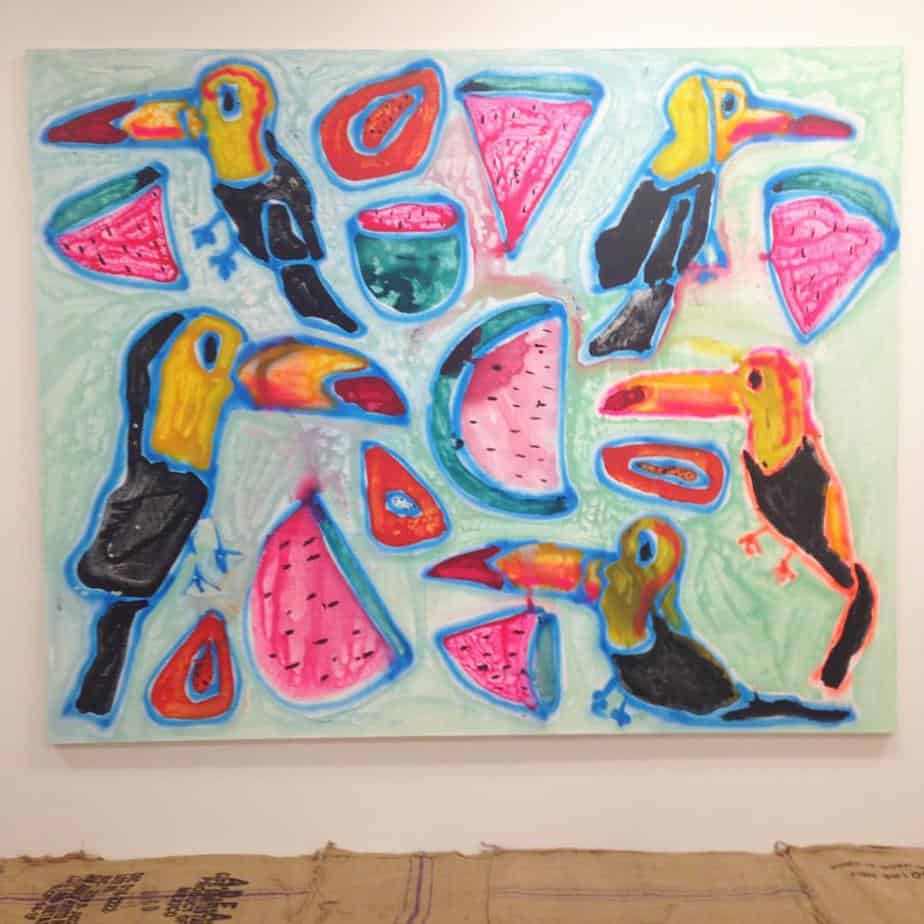 Fresh off an artist residency in Puerto Rico, Bernhardt was inspired by the island’s emerging art scene and connected with local artists during her stay. The show’s title actually pays tribute to twin brothers Pablo Del Hierro and Efrain Del Hierro, an artist duo named Poncili Creacion who produce performative mobile sculpture. The series consists of eighteen works, all completed this year, most of which have been executed in her signature combined technique of spray paint and acrylic. Elements of the Caribbean come to life in her canvases, coming in sumptuous shades of greens and blues complemented by exotic creatures. This is also precisely where Bernhardt engages the viewer, contrasting nature with mundane objects such as toilet paper, cigarettes and smartphones. The exhibit is totally experiential, as the entire flooring is comprised of burlap bags used for foodstuffs, enhancing the tropical island feeling. 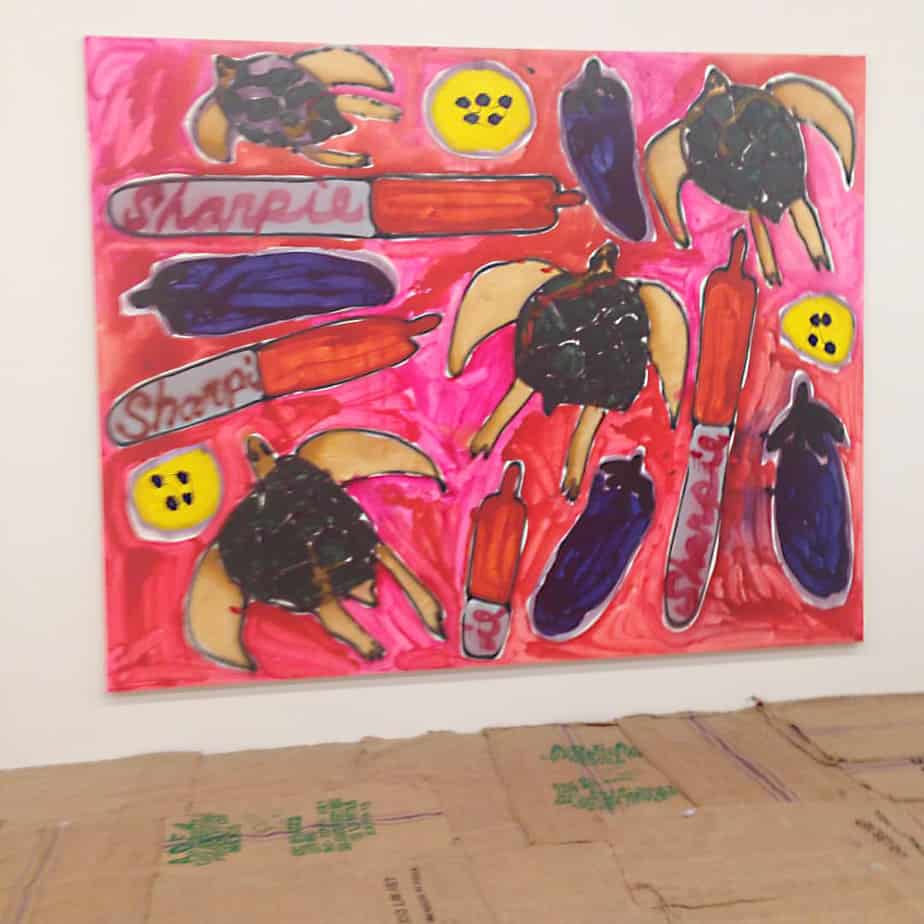 A true disciple of post pop art, Bernhardt passionately explores consumerism and materialism laced with kitsch in her work. Having spent about fifteen years in New York, fashion plays a huge role in her aesthetic, which is evident in her earlier decadent, stylish portraits. Bernhardt has stated that she is ‘obsessed with models’ and pores over magazines for endless inspiration. Bernhardt has collaborated with Chanel and Miss Sixty on window installations and most recently with interior designer/art adviser Maria Brito on a collection of fashion accessories based on her paintings. 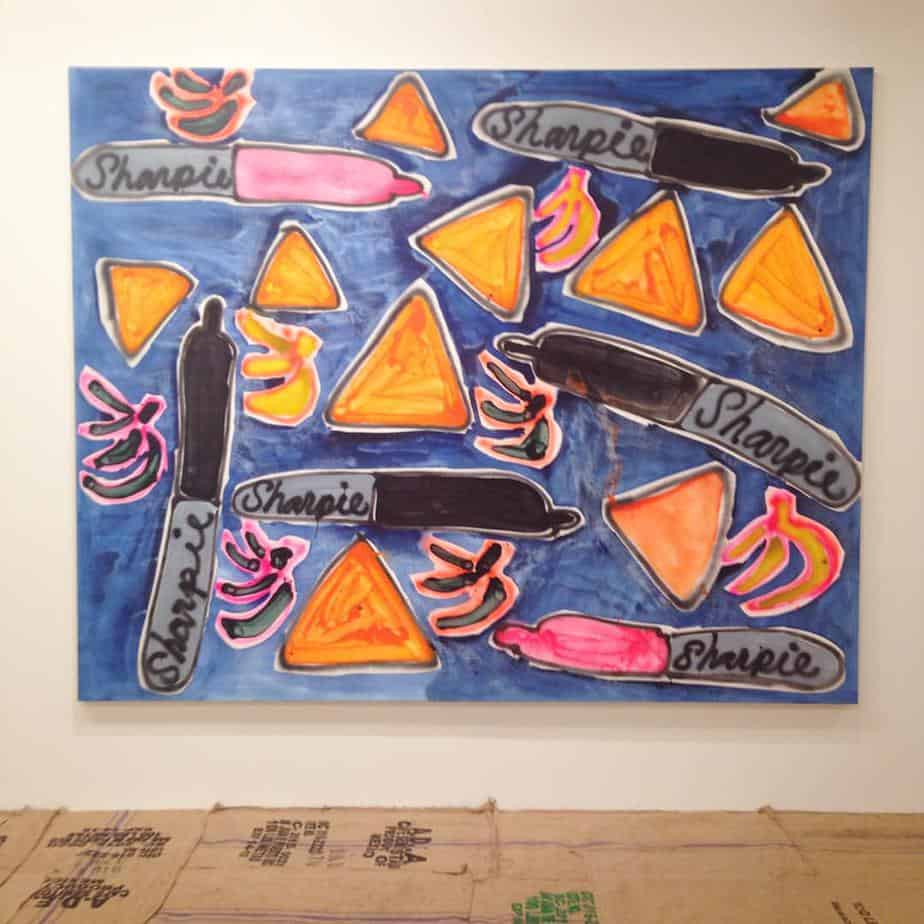 Bernhardt is represented by Canada Gallery on the Lower East side in New York and had a stellar solo show in 2014 titled ‘Stupid, Crazy, Ridiculous, Funny Patterns’. It was a collection of paintings depicting a campy mash-up of novelty items – pizza, hamburgers, tacos, desktops, coffee, cassettes, basketballs, etc – presented in a drippy, gestural style. This is her debut exhibit with Venus Over Manhattan, which was preluded by her first public work commissioned by the gallery earlier this summer. ‘Fruit Salad’, is a large-scale, outdoor, semi-permanent mural encompassing Venus’ second gallery in Downtown Los Angeles. ‘Pablo and Efrain’ will be on view through  October 24 at Venus Over Manhattan in New York. 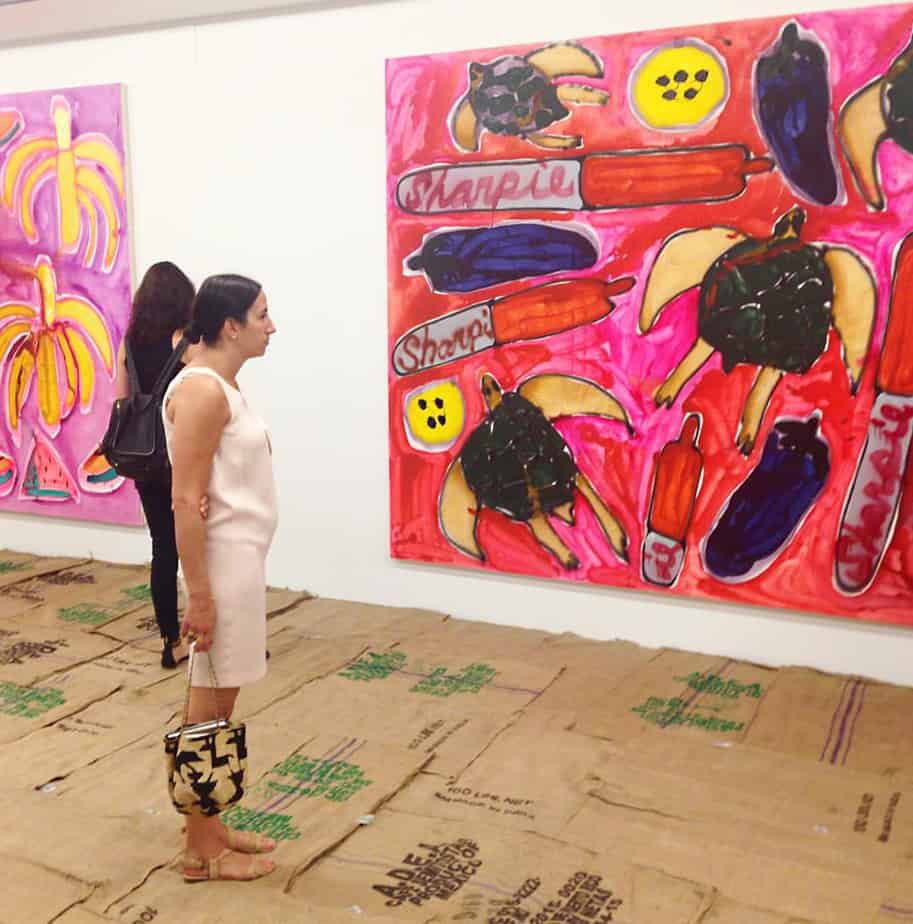 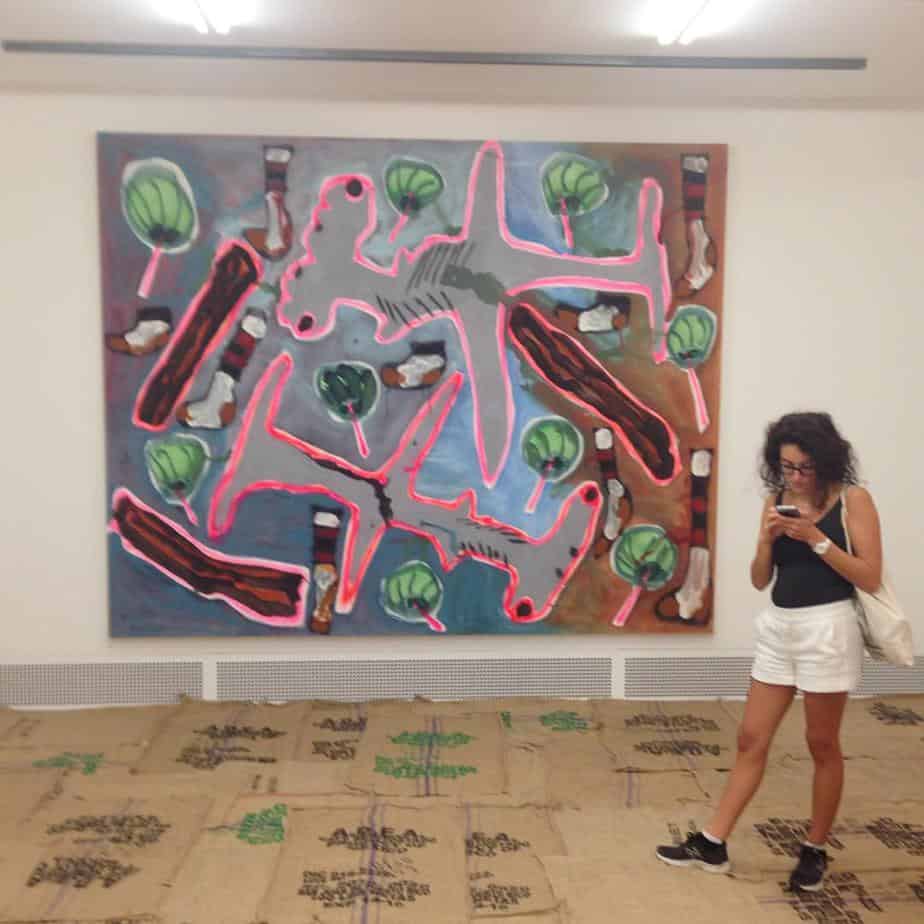 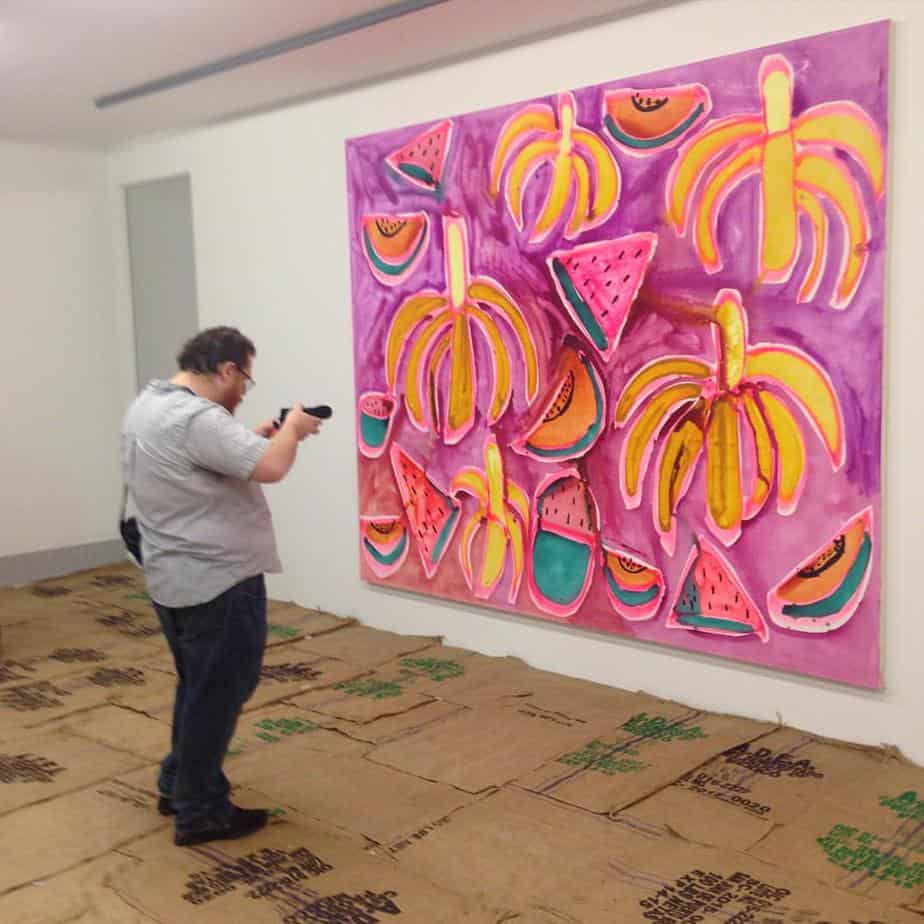 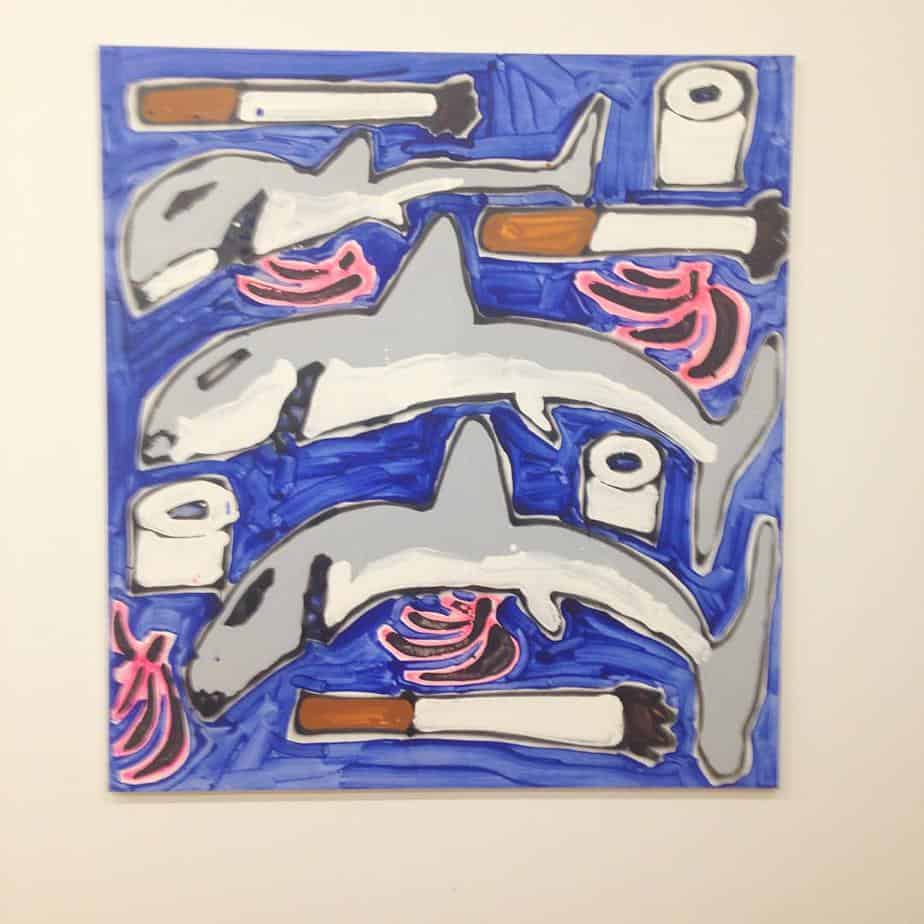 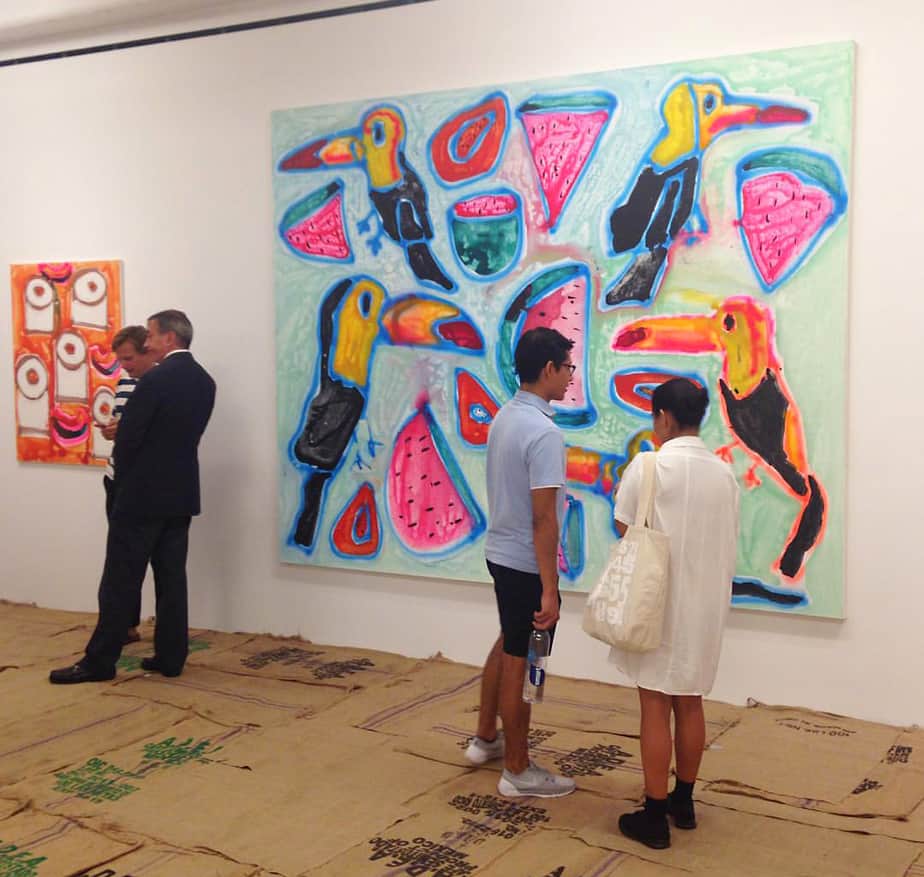 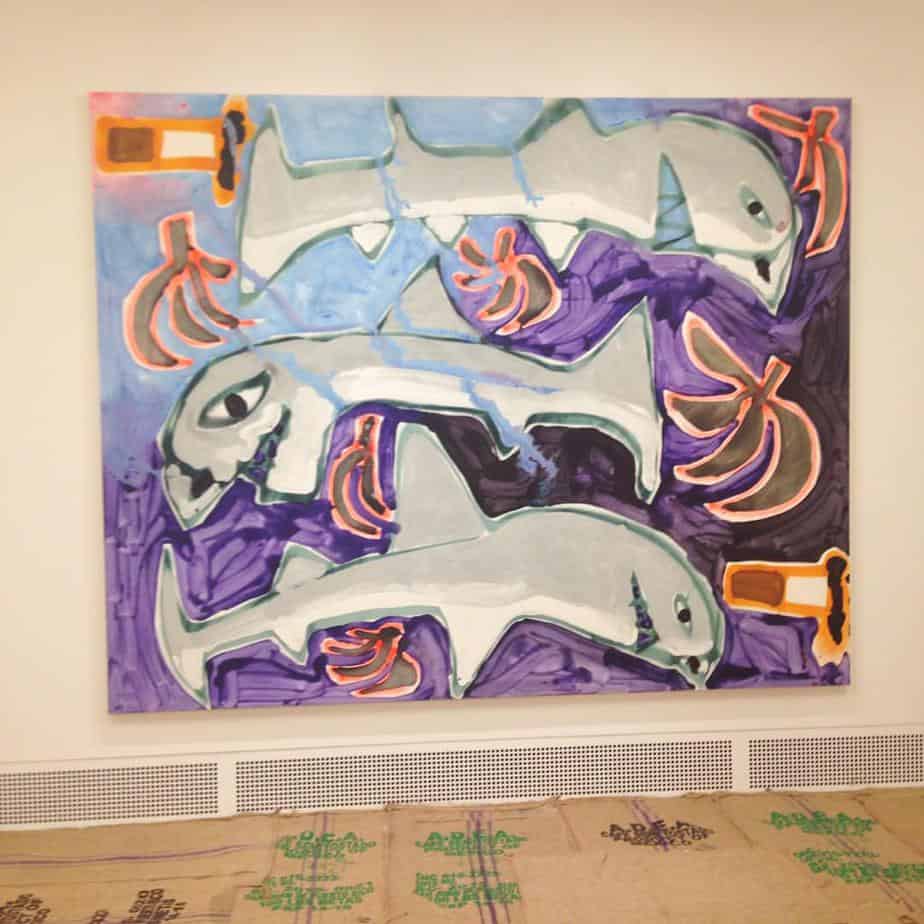 Jasmin Hernandez is a New Yorker with a deep passion for visual culture and a rich background in fashion, editorial, and digital media. Ms. Hernandez is the founder of Gallery Gurls, where she covers the contemporary art world and also regularly writes about art & culture for numerous digital outlets. Visit jasminhernandez.com and gallerygurls.net. You may also follow on Instagram and Snapchat: @gallerygurls