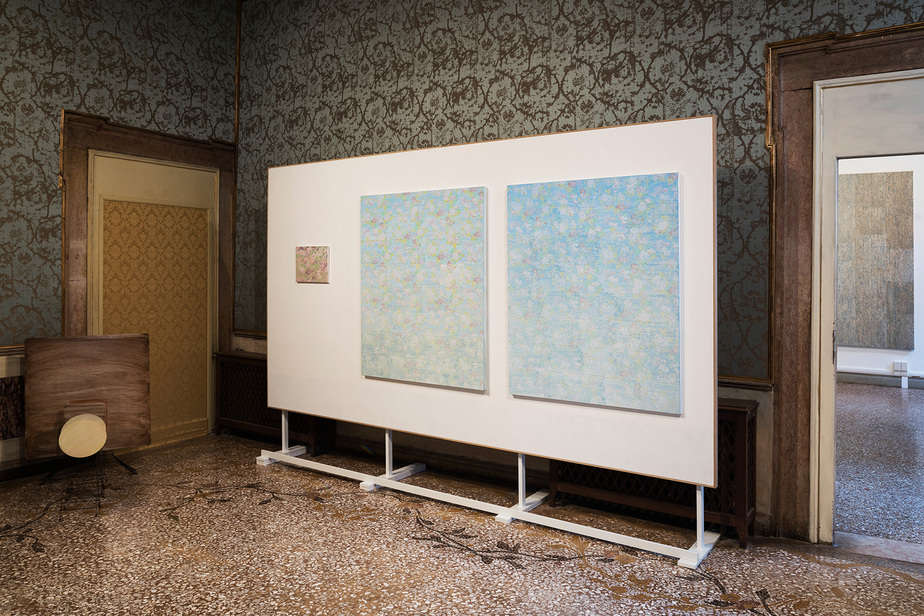 Behind The Curtain is an invitation to question the way humans look at things. Alluding to operatic traditions of both China and Italy, the curtain is a paradigm of the artist’ approach to art practice as it refers to that which is hidden from the stage, and that yet can still be perceived by the public. Repetition and a conceptually-driven approach have always been Liang Yuanwei’s peculiarity, as it is manifest in one of her most famous work, a performative installation titled umustbestrong (2004), exhibited in the palazzo. It consists of a typewriter and a roll of fragile toilet paper on which the artist typed ‘umustbestrong’ every day for two years. 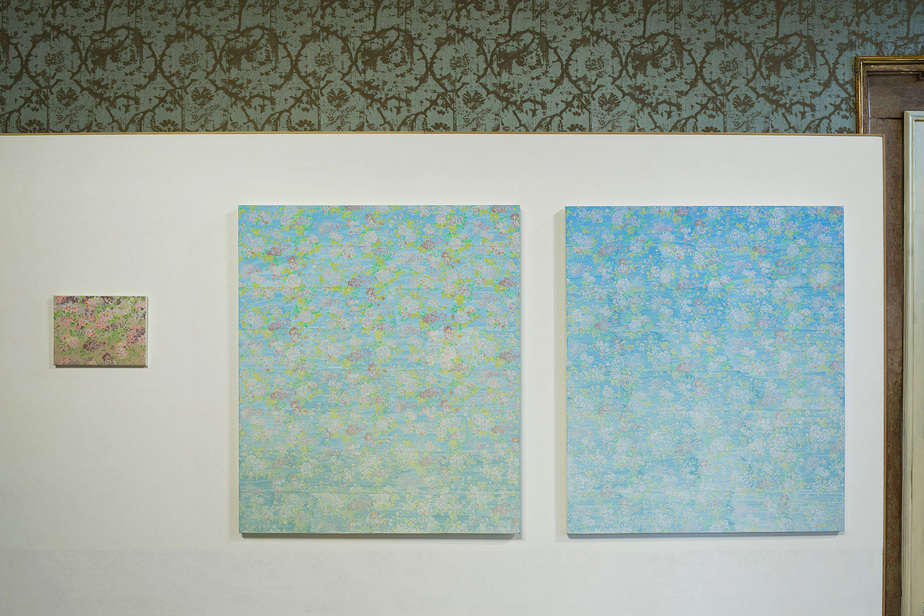 In the last years, Liang Yuanwei started focusing always more exclusively on paintings, developing a practice characterized by conceptual rigor and expressions of feelings. Depicting floral patterns of old Chinese fabrics with pastel-like, thick colors, the paintings exhibited at Palazzo Pisani (all realized between 2015 and 2017) look like a gentle invite to calm and meditation. Yet, as one looks deeper into the paintings, it is impossible not to perceive the painstaking and almost obsessive approach that informed the making. 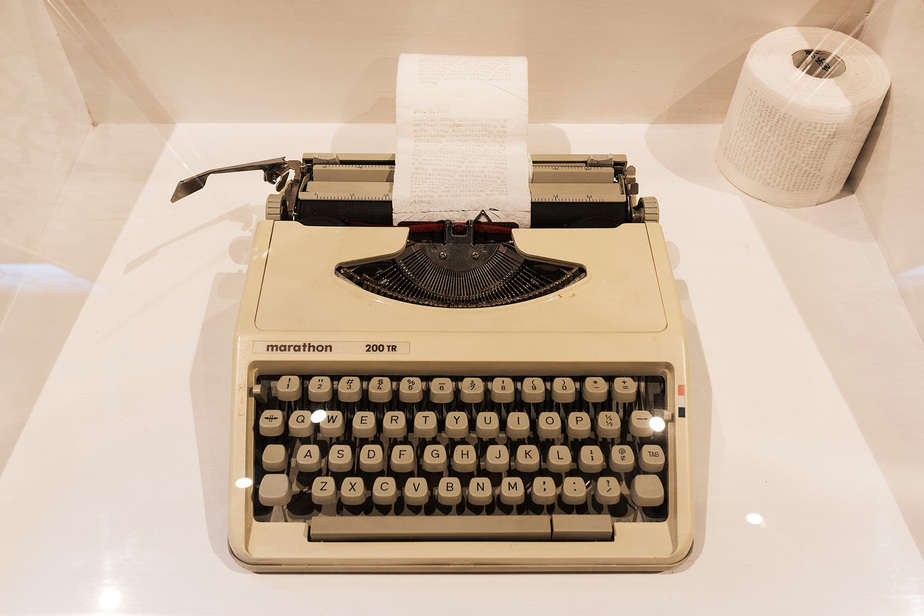 I have met artist Liang Yuanwei (LY) and curator Loïc Le Gall (LLG) at the opening of Behind The Curtain at Palazzo Pisani in Venice, and posed them a few questions on the project.

Vanessa Saraceno: This is not your first time in Venice. At the 54th edition in 2011, you represented People’s Republic of China in a group show held under there  curatorial direction of Peng Feng. How is your experience of Venice changed since then?

Liang Yuanwei: At that time I was part of the curator’s project, and didn’t really have so much confidence in what I was doing as I have now. This is a solo show and I have worked on this project discussing with Loïc Le Gall for long. When he came to my studio at the beginning of this year we decided to select some my past works and show the development of my practice. This project can be seen as the result of that work. Some of the pieces we talked about are displayed in the first room as they have been truly fundamental in my practice. In addition, they prepare the way to the last series of works which is shown in the last room.

VS: How would you describe the way your practice, particularly your painterly practice has changed lately?

LY: At the beginning I was painting dividing the canvas in horizontal section, working day by day on each specific section to make sure patterns were all identical. I wanted the painting to simulate perfectly the patterns of wallpapers or fabrics, so I took care of every detail obsessively. Because of this, my brushes were quite thick and very plastic at that time. Having worked exclusively on oil paintings for almost ten years, I developed trust and confidence in what I am doing. As a result, my painting is thinner now. I play a lot with brushstrokes, and in the last works I worked on vertical sections, progressively developing new methodologies to approach the making. It was to me a great challenge to exhibit my paintings in the context of the ancient Palazzo Pisani, under its beautiful frescos. My work comes from the rethinking of ancient Chinese techniques of painting. In Chinese traditional paintings, the movement of the brush upon the canvas tends to be quite imperceptible. My practice takes on that tradition to create paintings that accurately simulates man-made fabrics and wallpapers. I started applying Chinese techniques to create replicas of textiles and wallpapers as I was fascinated by the idea to mix presumably ‘high’ art with popular or even commercial art or design, as Pop Art was doing in the West. Now, the process of making and the methodological approach is more important to me. Yet, I still find fascinating to play in my practice with the influences and connections between my work and Western history of art. I am particularly glad to have had the opportunity of this project in Venice because I hope people may find such connections too. For instance, the grey-blue that I used in my last paintings comes from my study on the Italian Renaissance master Angelico; yet, the work imitates patterns of old Chinese silk art. 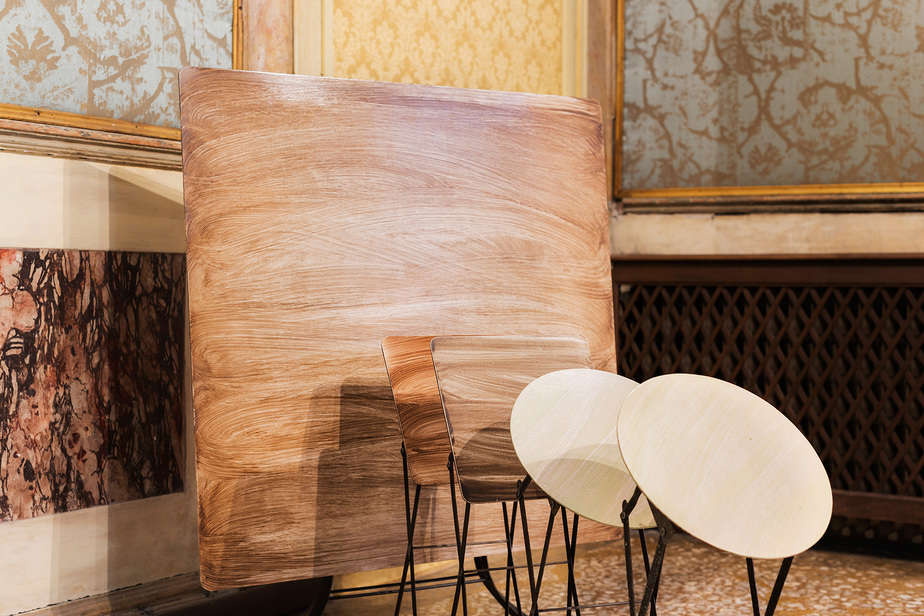 VS: You said you consider the work as a record of the performance of making, performance that you repeat every day, working for hours on specific sections of the painting so to create patterns that are both similar and different in forms and shades one from the other. How do you combine in your practice this tension between inner motions of calm and meditation with the mechanical rhythm of painstakingly detailed patterns?

LY: My painting hinges very much on my intimate feelings, private emotions that I try to catch and control through the meticulousness of my work. I began the series of paintings displayed in the first room from the study of one small flowered piece of a skirt. Yet, as soon as I began, I realized that the memory of my feelings towards that fabric, the memory of the sound it made when I moved it, or of the feelings I had when wearing it, all this was deeply influencing my work. I am trying to translate all these feelings and memories in the efforts I make for each of my paintings.

VS: This exhibition also features two beautiful, past installations, Early Spring (2010) and Umustbestrong (2004-06). Are you still working with this medium or will you keep focusing on painting?

LY: I do not have enough time to work on both. And honestly, I trust the language of paintings so much now that I don’t feel necessary to do something else for now. I always want to make more paintings and keep learning from the process of making paintings. 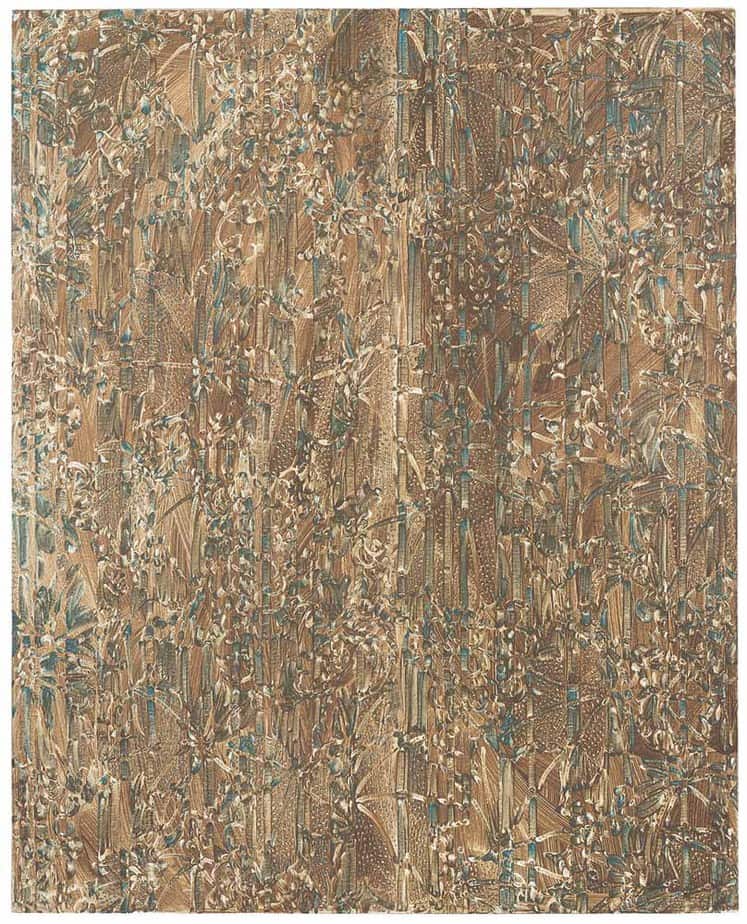 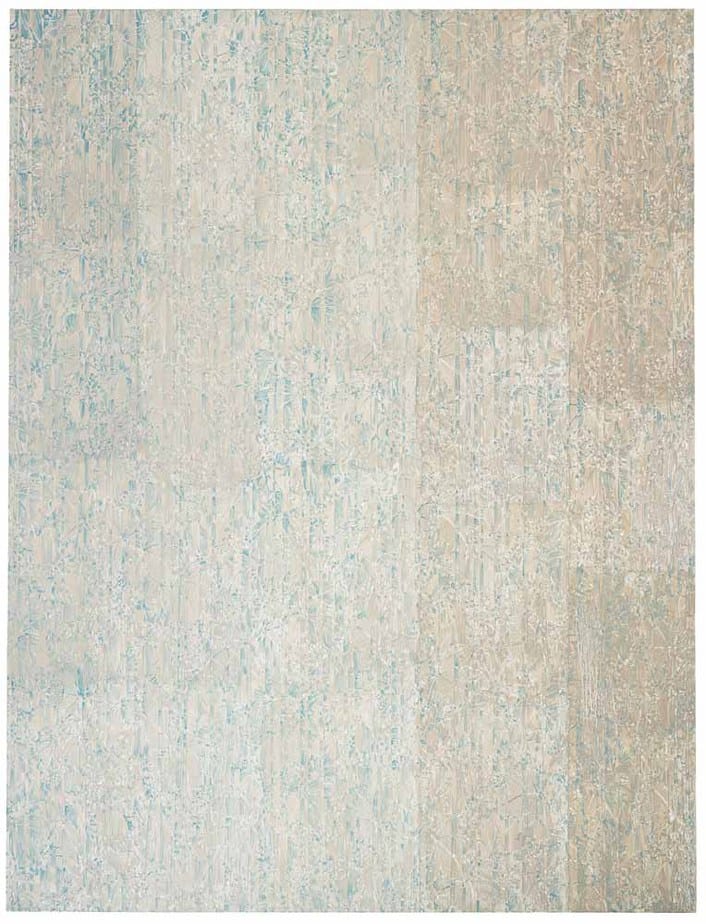 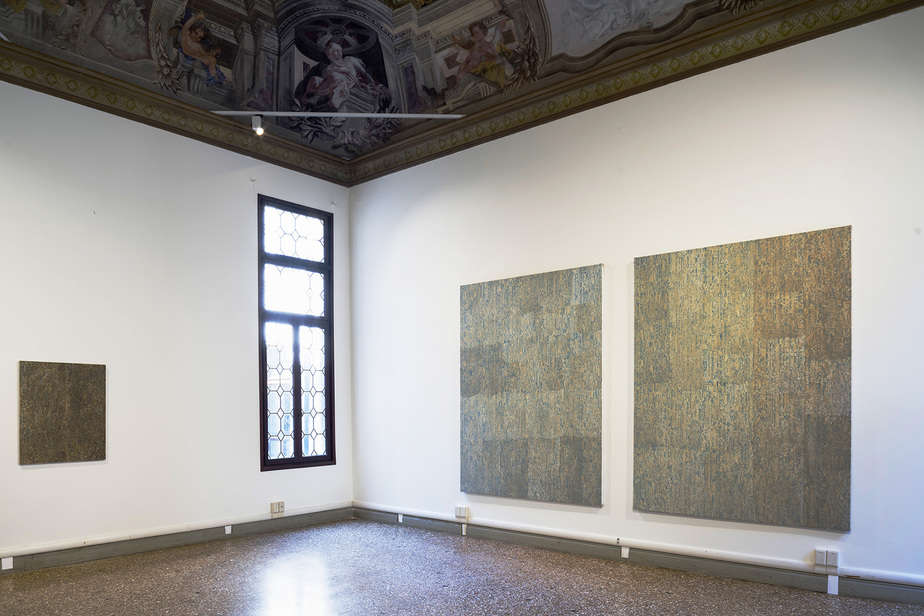 VS: You have always focused your curatorial work on artists who are interested in the virtues, perils and consequences of globalization. How have you found working in highly-institutionalized places and -if I may say- Western-centric events as the Venice biennial, yet proposing artists whose work speak a transnational language?

Loïc Le Gall: As a curator, I have found out that is actually easier to find connections between different cultures than to outline what the same cultures do not share. In a sense, this exhibition silently shows the sublte links that may be found among different cultures. It is a project made by a Chinese painter, and the featured works speak about ancient Chinese art and the Song dynasty. Yet, they are also utterly inspired by studies on Beato Angelico or Masaccio and are exhibited in an ancient palazzo of Venice.

VS: According to you, why does Venice still matter in such a globalized, transnational context?

LLG: Venice has a long history of globalization. Actually, the biennial itself started as a project dominated by nationalisms, and deeply influenced by its national pavilions. In this sense, Venice has always been a center for contemporary art and its transnational culture, and it certainly still is.