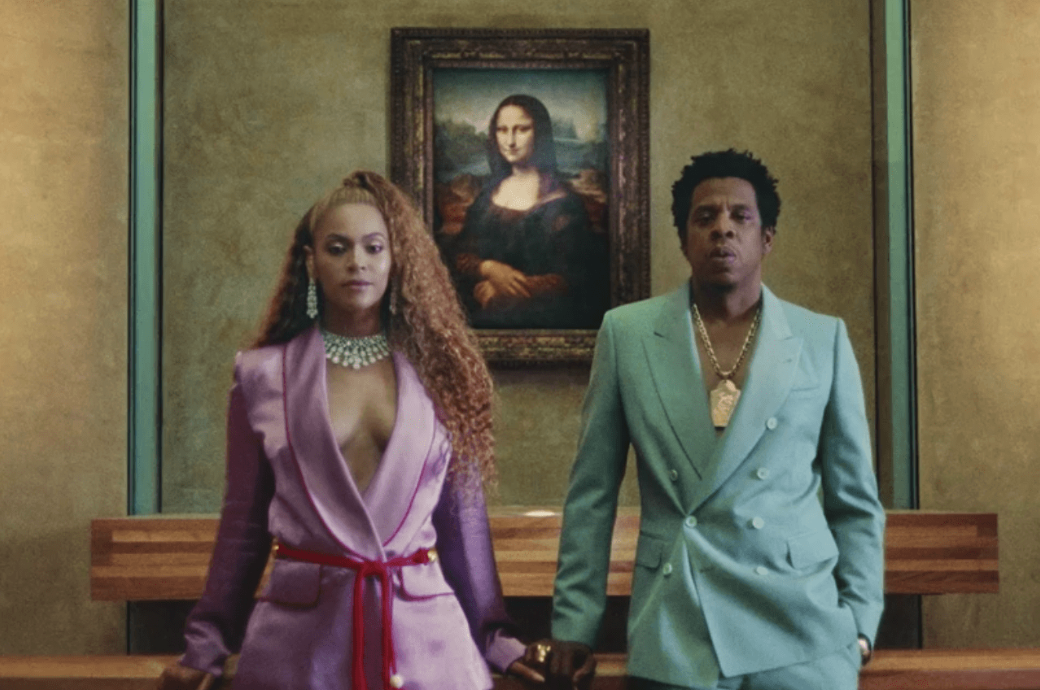 While it is always considered sacrilege to decry or insult anything put out by Beyoncé and/or Jay-Z, some of us must be the lone wolf in taking that risk. And with the release of their only visual accompaniment thus far for Everything Is Love, “Apeshit,” we must ask ourselves, would the artists paraded for the sport and narcissistic benefit of Jay-Z and Beyoncé to boast about their sham of a marriage be pleased? The answer, likely, no. And it has nothing to do with the fact that the bulk of the artists featured in the Louvre–the location that no one knows how Jay-Z and Beyoncé managed to shut down for the filming of this video–are white males who very probably had racist tendencies. Not to mention most of the subjects of the paintings being white males who very probably had racist tendencies.

No, it’s more to do with the grossness of this idea that Jay-Z and Beyoncé are saviors of a culture, the sole liberators of a black population over which they seem to think they reign–Napoleon-style. Teaming again with Ricky Saiz (who directed that other Paris-centric track, “Yoncé”), the concept for “Apeshit” rests entirely on location: the Louvre. And, speaking of Napoleon, among other famous pieces in the museum showcased, use of “Consecration of Emperor Napoleon and Coronation of Empress Josephine” feels particularly contrived. Beyoncé writhing in front of “The Winged Victory of Samonthrace” is also a little too on the nose (and sure to be attempted by many a fan in impending Instagram stories).

With Jay-Z wielded almost in the same way as the art–as a prop–we often see him standing stoically next to Beyoncé so that she can “make her feminist statements.” And, of course, what everyone is oohing and ahhing over most of all is the deliberate inclusion of “Portrait of a Black Woman (Negress)” by Marie-Guillemine Benoist. As one of the only pre-twentieth century portraits of a black woman not specifically depicted as a slave, it holds weight. Then again, if it held that much weight, maybe Bey and Jay could’ve hit people a little more over the head with it instead of perpetuating that damned cliche Mona Lisa, which surely Leonardo Da Vinci would not appreciate having them stand in front of looking so utterly unimpressed. Nay, smug.

So while it’s all very “noble” for everyone’s favorite celebrity deity of a couple to “do politicism” through the re-appropriation of the kaleidoscopically white-centric art in the Louvre (in addition to the re-appropriation of the racial slur related to “gorilla“), it’s also, to be honest, mostly annoying. Sure, I’m being blasphemous by going against the Church of the Carters, but they are being more so by further highlighting the fact that art and literature are only viable when they sanction it (see: their children’s names).

Nobody famous should shoot in the Louvre, to be honest. Art is–or at least should be/once was–sacred. Not wielded for the vacuous purpose of trying to make one’s own “meaningful” art by “poignantly” juxtaposing images of themselves in the same poses as the sculptures and paintings. It’s 1) trite, 2) played and 3) likely going to make an outing to one of Paris’ tourism staples even more insufferable as Beyhive members themselves try to imitate scenes from the video.