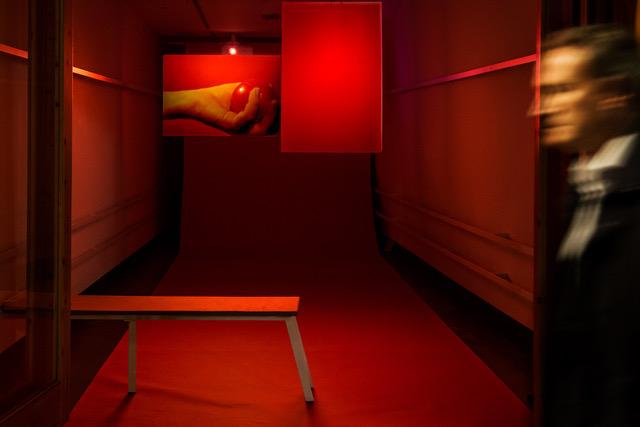 This is the best fair I have ever been to. Staged across three floors of the Almanac Hotel, LOOP Barcelona Fair (20-22 November) sits within the context of LOOP Festival which takes place across multiple venues (Galleries, Foundations, Museums) throughout the city 12 – 22 November. Established in 2003 at the dawn of hyper-connectivity (two years before YouTube), this is a festival dedicated to “time-based media” (the current preferred term for moving image artworks). It runs in tandem with a series of professional talks, titled “What about Production,” that examine aspects of artistic creation in an age of mass-producers: authorship and the slippery boundary between artist’s films, cinema, and social media content; the need to balance public access to works – such as low res online viewing –  against the private sale of limited editions; the role collectors and foundations play as both enablers and custodians; and the complex issues of funding. 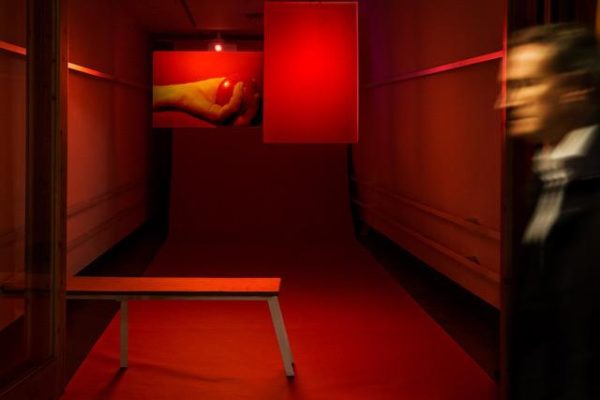 The fair kicked off with the word perfect Hans Ulrich Obrist, curator of the Serpentine , in conversation with powerhouse Patrizia Sandretto Re Rebaudengo (dubbed Italy’s Peggy Guggenheim), of her self-named Fondazione, on their collaboration and funding for artists who work in the un-mappable expanse of technological innovation. Referencing Paul Klee’s dictum that art “does not reproduce the visible; rather, it makes visible,” Obrist elaborated on his curatorial interest in artists who explore the unpredictable, open-ended or accidental and highlight our complex relationship with the man-made. He threw a spotlight on recent protégé Ian Cheng, and his ambitious charting of consciousness through a trilogy of video simulations Emissaries. Each simulation is centered on the life of an emissary who is caught up between unraveling old realities and emerging weird ones – strangely familiar – and with this Obrist introduced us to Cheng’s concept of worlding. “The unnatural art of creating an infinite game by choosing a present, story telling its past, simulating its futures, and nurturing its changes.”  In this infinite game, Obrist and Rebaudengo, collaborate as producers, enabling Cheng to bring creations forth from his video simulation into the physical world, whilst providing a platform for ongoing creations such as BOB (and AI – Bag of Beliefs). Still with me?

Laterally, they also discussed their own analog creations, such as the importance of writing show catalogs, and the recently published Dreams/ Sogni a document of 100 artists’ actual dreams. Inevitably, our minds turned to Phillip K. Dick’s post-apocalyptic novel “Do Androids Dream of Electric Sheep.” 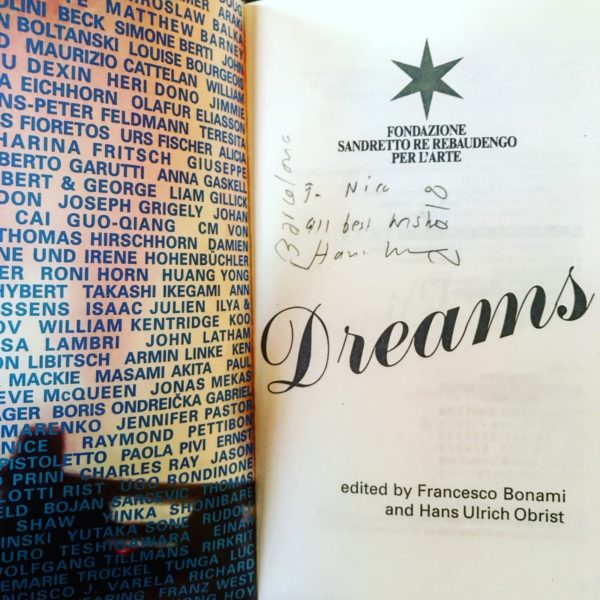 “My great dream is to finish with dreams, but to believe I am dreaming.” Rosemarie Trockel

Obrist’s curatorial experiments are taking place in the safe confines of his excellent institution, but who knows what Frankenstein lab of the renegade outsider artist is waiting to be discovered… More importantly, with such a niche genre, where do we – the general public – get the chance to watch them?  Up the glass elevator, I went to the first floor of LOOP, where each participating gallery screens a work in a bedroom, beds and furniture repurposed as movie seats. By contrast to the clinical booths of contemporary art fairs, the experience is intimately surreal.

My introduction was harrowing and unforgettable. Gallery Analix Forever was screening the gripping dystopian masterpiece by Mounir Fatmi Nada – Dance with the Dead. A 17-minute assemblage of images cut from museum archives, World War II footage and his own cerebral image bank, Fatmi set himself the task of making a work of art as horrifying but exquisitely moving as Goya’s paintings. Can you create the sublime through the close scrutiny of war archives? Devastating images are spliced, layered, panned and burnt in sequence to hypnotic sounds of the artist breathing, dogs barking and his haunting incantation of Leo Ferre’s poem Des Armes. Close-ups of agony from Goya’s painted faces bleed into speared bulls charging, red fighting with yellow and blurring into mass graves from the Holocaust, then the shocking glimpse of a woman’s sex. Then the celluloid burns to white nothing. Fatmi creates a multidimensional tableau mort, and I could not avert my eyes. “Look!” he begs us “Look at this bloody catalog of treachery, this is man.” As art critic Paul Ardenne surmised, “if Mounir Fatmi was to leave us just one work as a testament, one that condensed all his interests in his way of doing things… Nada would be the one.” 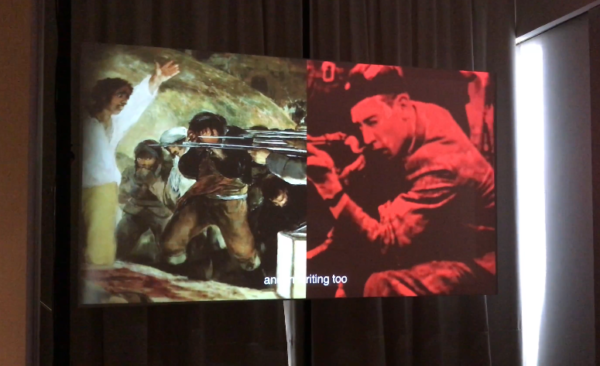 Down the hall, London’s Ryder Projects provided a hypnotic balm with Andrea Galvani’s infinite sunset, The End. Filmed at supersonic speed in the opposite direction of the earth’s rotation, this looped 3-minute film takes us out of time. Viewed on the small screen of a laptop, placed at eye height on a concrete plinth, we get a sense of traveling without moving (and perhaps a familiar sensation of how we lose track of time). By contrast to Fatmi’s ode to the destructive force of man’s invention, The End is a sculpture, a totem, to the wonder of science and invention (born in Italy, both the artist’s parents are scientists).

Equally wondrous were Desiree Dolton’s Complex Systems, a digitally drawn flock of starlings pixilating through the sky in a loop of ever-changing patterns, Lois Patiño’s Sol Rojo, exquisite visuals of oceanic abyss from the Hadal zone (6,000 metres below), and Angelika Markul’s Si les heures m’étaient comptées  a mind-bending black and white document of what it is to walk through the lethal atmosphere 300 meters underground amongst giant selenite crystals, some 11 meters long.

Floating dreamily into Galeria Senda’s bedroom, clutching my dying iPhone, I was not prepared for the brilliant rush of Catholic guilt this film, Talking to God by Glenda Leon, triggers. Shot in a cathedral resplendent with icons and frescos, we see a congregation, heads bowed in prayer. The camera pans up and around in a sweeping panorama of angels in the alcoves, and then zooms in, turns to the front and pans down. Following the outline of a yellow shirt towards the subject’s hands, we discover with a sting of humiliation they are not in prayer but holding a mobile phone, thumb scrolling. As the camera then moves along the pews we discover that every single person sitting in silence is looking down at their screen… its a moment of cinematic genius, one that taps into or rather reawakens our latent guilty conscience. I could almost smell our collective shame as we respectively let go of our glowing handsets. 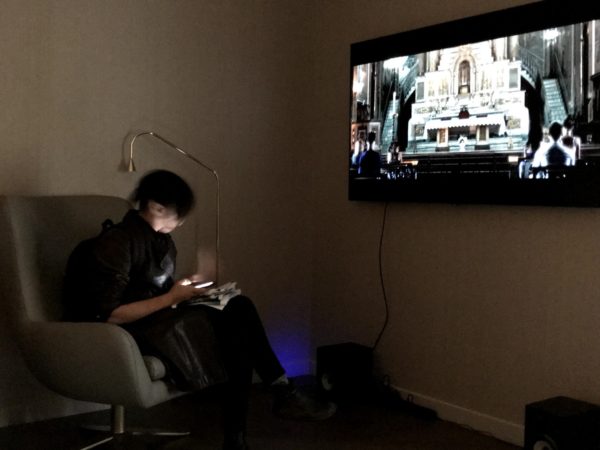 Ultimately, this fair reminded me that with so much happening on the fringes of technological innovation and this wonderfully niche genre of time-based media, we need to look purposefully, and with care. If you get a chance, go to the VIDEOCLIP section of LOOP website and have a look at few…

Tulio Pinto, fresh from his residency at Piramidon, this one-to-watch Brazilian sculptor also showing at the new Atchugarry Art Centre for Miami Art Week, stole the show with his absurdly hilarious work, Unicornio, part of his interconnected show series Tres Tiempos. Lost in the Superstition Mountains, Phoenix, Arizona, Tulio dresses himself up in a bright orange boiler suit (the only colour we see in the glass blown elements compressed with rusting bars of steel in his sculptures) topped with a white unicorn’s head and a cluster of long thin orange balloons; a comically alien mane, moving in the wind like tentacles underwater. 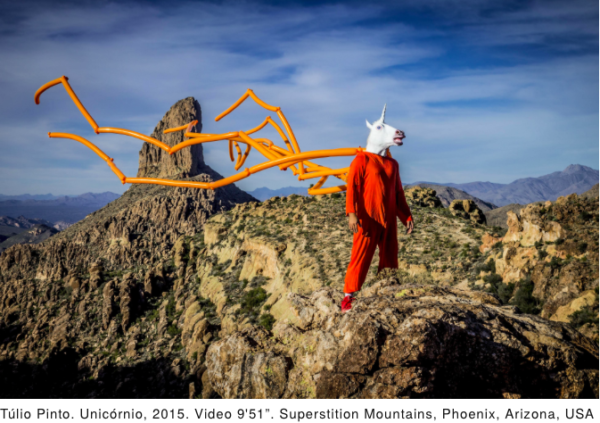 Also a sculptor Sarah Bayliss gets my vote for the best semiotics and presentation of work, Reground, in the small but perfectly formed street view gallery La Place located in the Gothic district of Barcelona. Back-projected on two suspended plexi screens, one horizontal and one vertical, in a powdery red scoop, this is Sarah’s second work in an ongoing collaboration with performer Rachel Gay.

A chance encounter with visiting artist Pascal Ungerer introduced me to the Homeland programme, a collaboration between The Damer House Gallery (artists-run, non-profit space for contemporary art, in Roscrea Co. Tipperary) LOOP Barcelona and Safia Art Contemporani. His monochromatic work featured in a selection titled “Of Memory” was desolately beautiful. 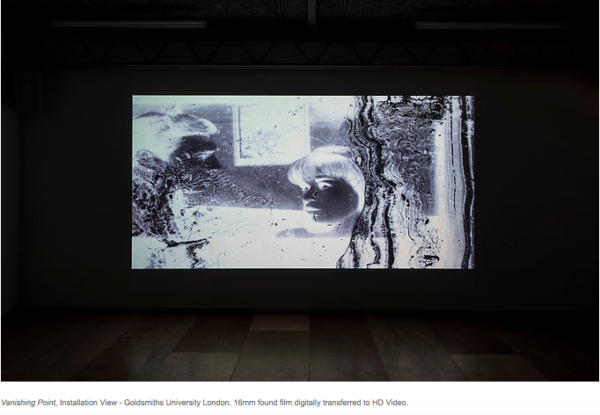 Many of these collateral exhibitions run through January, and not to miss is the father of this format, Haroun Farocki, showing at àngels barcelona run by one of the co-founders of LOOP, Emilio Alvarez. My only reservation in rating LOOP too highly is that it will suffer from the kind of catastrophic expansion of other fairs which proportionally diminishes the experience of the viewer. To me, this fair is about memory – the individual and collective – and what we choose to repeat, save and play on a loop.