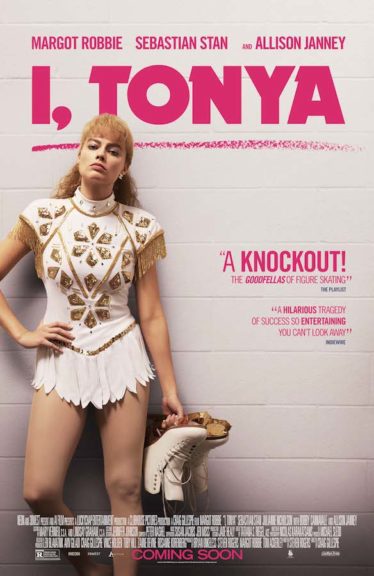 Any movie that leads with the title card, “Based on irony-free, wildly contradictory, totally true interviews with Tonya Harding and Jeff Gillooly” has me at irony-free. I, Tonya is a satire both uninhibited and direct, a club and a shotgun. The film tickles the collective American memory of the biggest 90s tabloid story pre-OJ and delights rather than disgusts us with a cynical appreciation of human nature. It stars Margot Robbie as Tonya Harding, Allison Janney (winner, Best Supporting Actress, 90th Academy Awards (Oscars)) as her chain-smoking, foul-mouthed mother, LaVona Golden and Sebastian Stan as her abusive husband Jeff Gillooly. The film opens with a series of mock first-person confessional interviews with all of the players including the Hardcopy Tabloid reporter who helped invent the 24-hour news cycle.

Directed by Craig Gillespie and written by Steven Rogers, the film never skitters off course when there are so many opportunities for failure. The filmmakers pushed an already too absurd to be true, real-life event and filters it through the near quarter-century of time. Matching the rebelliousness of the characters by breaking all the conventional rules of dramatic filmmaking like thou shall not break the fourth wall (and if thee does, be reckless) and Zambonis it into irrelevance yet still manages to leave us spellbound in darkness. It’s the filmmaking equivalent of the triple-axel that Tonya Harding landed in competition a lifetime ago and most mortal figure skaters dare not attempt to this day. As we head towards the 2018 Olympics, there are only eight women who have ever landed a triple axel in international competition. And, Harding landed the fucker in 1991. Then there’s the minor casting detail about finding an actress who can skate and sound enough like Tonya Harding to forgive her for being a bit too lithe to be her doppelgänger. Australian born, Robbie had been a teenaged hockey player and was able to do much of her own skating but was unable to master the elusive triple. Using a stunt double was not an option as the only two women who can currently land a triple are too short so they brought in a couple of pros who could almost pull it off, added some movie magic and we got ourselves a perfectly executed triple.

In 1994, I wanted to believe I was on team Nancy but really, I was secretly on team Tonya. Nancy Kerrigan was beloved by America. Her lustrous chestnut hair tamed. Costumes designed by Vera Wang, skin flawless. She skated her way into the hearts of Americans like she was born to win an Olympic medal. But some amateur hitman came along and whacked her knee cap almost shattering her Olympic dreams (the official diagnosis was a bone bruise) and flipped the story from hard work and dedication to tabloid headlines. Tonya was the anti-ice princess: she drove a pickup truck, she sewed her own costumes and she wasn’t a virgin (a married amateur skater). No doubt, Tonya Harding was her own frenemy, not the other amateur skaters her mother had forbidden her from forming friendships with on the ice. The kid never had a chance. She came from a broken home with a mother who made Joan Crawford’s mommy dearest look positively cuddly; to an abusive marriage to Gillooly; to a tabloid sensation; to a disastrous Olympic performance; to being banned for life from the only thing that truly brought her any happiness or more importantly gave her hope for a better life by the time she was 23-years-old.

As much as this is Harding’s story, it’s Gillooly’s and Golden’s. No one gets to the Olympics by herself, not even a figure skater. Someone had to drive the kid to the rink, pay for lessons, the coach, the costumes, put actual multiple course meals on the table, beat the kid with a hairbrush, berate her for imperfections and steal her childhood. And no one could possibly do it better than 2018 Golden Globe winner, Allison Janney, with her parakeet, “Little Man” or husband number six on her shoulder pecking at her oxygen tube. What is known about LaVona is that she is highly articulate, swears with impunity and largely stayed out of the public eye. The filmmakers never crossed the line from satire to lampoon with Golden and neither did Janney. It isn’t clear if she had the best lines in the film or the best delivery, but as a supporting actress of Olympian stature, she has some of the most memorable in the film. “Tonya’s my 5th child from husband number 4. She was always a handful but I loved her and I guess we spoiled her. Which is a goddamned hat-trick when you haven’t got shit your entire life. I drove her to competitions and practices. I sewed her all her costumes. But to her, her mother’s a monster.” I mean, the woman may have been a monster but Allison Janney turns Rogers’ script into a poetry-slam.

And without Jeff Gillooly who has now changed his last name to Stone and his posse of fools, there would have never been “the incident” that changed Olympic history. The thing about I, Tonya is that it is a near-perfect movie. It does its job, which is to entertain.  It isn’t the task of the filmmakers to re-create history. It is their job to make art, and art is meant to surprise us, which I, Tonya does over and over again.  The movie is based on an incident that became such a part of the public consciousness that they had to get the facts right for the most part. What they do best is show how memory is imperfect and that everyone has his or her truth — everyone that is, except Shawn Eckardt (uncannily portrayed by Paul Walter Hauser) who is impervious to facts.

A quarter-century after the advent of the 24-hour news cycle, we haven’t evolved. Our appetite for scandal has become so insatiable we skated into 2018 with a new generation of Tonya fans and haters but we did it with an Oscar-worthy film rockin’ a soundtrack that will wax nostalgic for anyone old enough to drive during the ‘92 Olympics, and school the rest of the audience on what music earworms are all about.