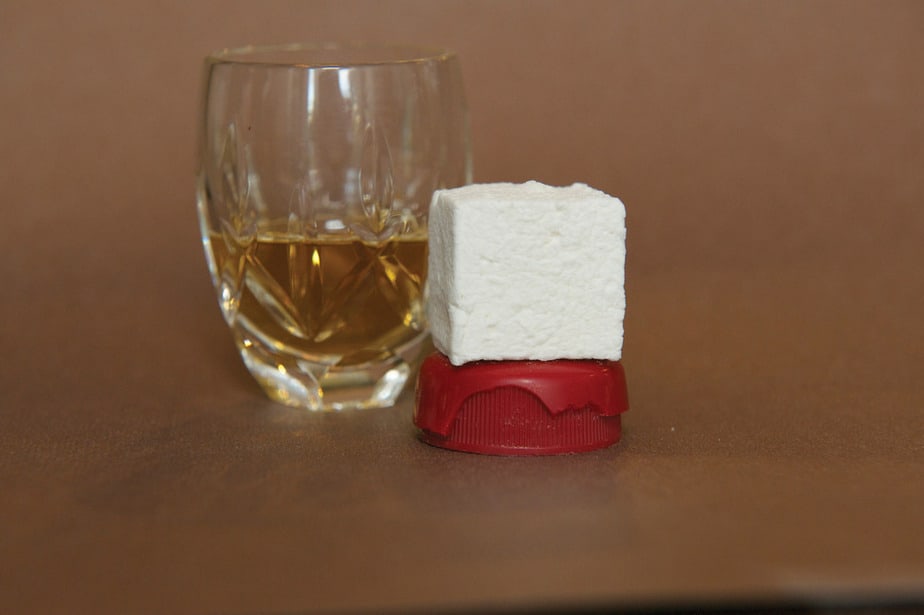 Once upon a time there was a marshmallow and all the children loved him. They used to roast him by the campfire and make s’mores, and add him to their hot chocolate and watch him melt. And the marshmallow loved amusing the children, for the heat never hurt him. There were always a thousand more of him at the ready, ever so eager to melt in the hands of some innocent. Sugar has always had a taste for amusement, anyway.

But as the children grew into teenagers and the teenagers into young adults, they lost their fondness for the marshmallow and would leave him sitting in the back of the pantry for months on end, wondering if he would ever melt again. One day, the marshmallow decided to leave his adult children to go find a new home where he might be appreciated. He made his way south, hoping that with the warmer weather he would find a warmer home.

One stormy afternoon in Kentucky, he scurried to the nearest shelter he could find to get out of the rain. It was a distillery. Not realizing this fact, he began to wander around looking for someone who might help him. As he meandered through the distillery, he came upon a room filled with barrels–giant brown marshmallows, he thought. He made haste to greet these mysterious giant marshmallows.

Finally arriving at one of the barrels, the marshmallow climbed up the side, using all of his might to fight that beast known as gravity, until he had successfully reached the top. ‘This is no marshmallow’ he said as he inspected the bizarrely brazen surface of this supposed giant marshmallow. Then he saw, sitting atop this prickly fake marshmallow,  a glass of golden-brown liquid. ‘Maple syrup,’ he jumped with excitement, and ran over to the glass. ‘This is what I need to get the children to love me again,’ he said. So he perched himself on the rim of the glass and dove in, believing he would coat himself in syrup and make everyone love him again.

The liquid in the glass was surprisingly fluid and soaked easily into his porous body. ‘This syrup is strange,’ he said and climbed up out of the glass. As he began to make his descent from atop the coarse, fake marshmallow, he started to feel very warm and a bit dizzy, like he had been partially roasted and left out on a surface somewhere for a raccoon to find. Upon reaching the ground once more, the marshmallow immediately collapsed and lost consciousness. He began to roll unevenly away from the barrel room, until a human spotted him on the ground. ‘What’s this marshmallow doing here,’ said a young bearded man. ‘There aren’t any kids around here,’ he muttered as he picked up the marshmallow. ‘Hmm. This smells like bourbon,’ he said. Then, without regard for certain societal rules about eating food off of the floor, the bearded man ate the marshmallow. ‘Damn,’ he yelled. ‘I can’t remember the last time I enjoyed a marshmallow so much. I gotta make me some more of these!’

To learn more about the fate of our beloved mallow friend, check out his new home at Wondermade: → here. ←

Written by Matia A Guardabascio.↓