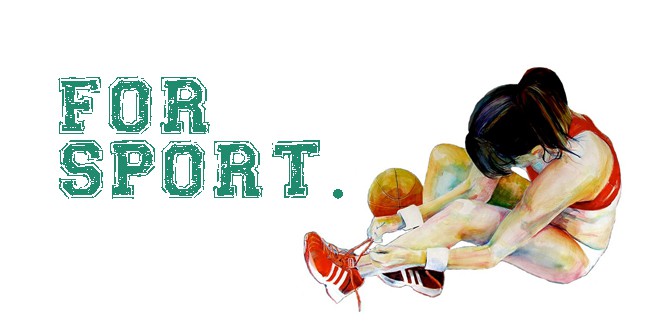 More often than not, women are subjected to some form of objectification–whether it be through the media or the opposite sex. But what of self-objectification? 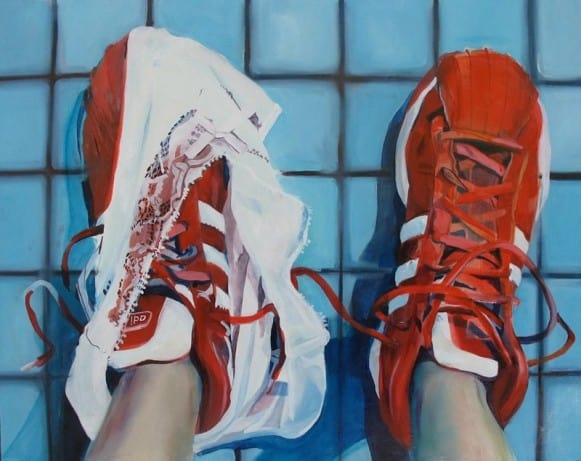 What is the overall inspiration behind most of your work?

“Iʼm inspired by people and the use of social media to exhibit intimate behavior. I am interested in portraying the face and figure in ways, which confront the notion of self-objectification. These paintings manifest how I see self-celebration and colorful behavior as actions, which reveal the vulnerability and self-containment of the exhibitionist.” 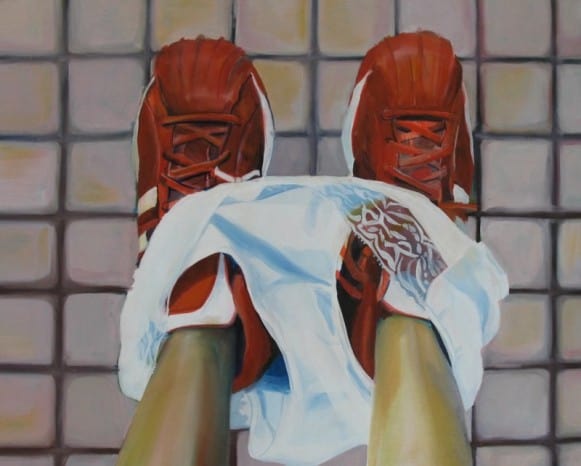 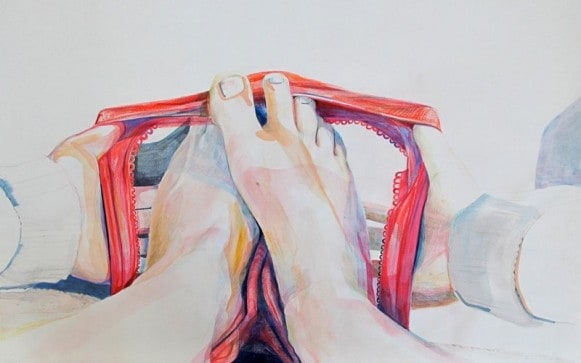 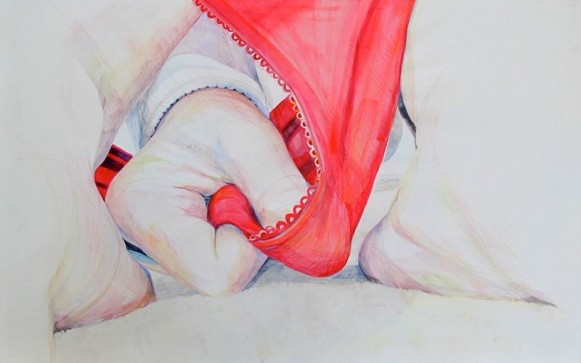 Grimsrud’s series, Locker Room Tableau, is a candid look into our own psyche and a preemptive strike on the future–it is also a window into her own deep fear. A collective body of deceptively sensual rhetoric, each piece is a foreboding interpretation of what we’ve become.

Tell us about the concept behind Locker Room Tableau…

“In Locker Room Tableau, a collection of performative work, I use the athlete’s body, underwear, a pair of sneakers and the Photo Booth crop to subvert the voyeur’s gaze into that of a Peeping Tom. In my cutouts, the female athlete is portrayed in a billboard-like Pop Art fashion; her faceless depiction representing a type of person, not a specific person. Caught at invasive angles in her underwear and Adidas sneakers, the figure is removed from her surroundings, and placed on a white wall, self-contained. My portrayal of the figure as a form of objectification, fetishization and vulnerability stems from the questions and fears I have about the shared private moments I see every day. I use the almost-naked athlete as a metaphor for the exhibitionists I observe online, who provide a tell-all, show-all take on their daily lives.”

What do you say to those who feel like your art objectifies women?

“I would agree that self-objectification is one of the points Iʼm addressing in my work. Often the most powerful art – paintings, prints, films, installations, etc. often investigate themes, which require provocative content to effectively communicate a message or evoke mood and feeling. I would also encourage them to reflect on the image they have seen or posted online. Have any been troubling? Have any been humorous, but maybe a little too private?

In Locker Room Tableau, the faceless figure is representing people (many of whom are women) who objectify themselves on a daily basis through the things they share online. The images I find are sexually suggestive, provocative and sometimes gross and offensive – a reminder of the times in which we live. Iʼm using painting as an alternative platform for discussing the state of identity politics and how it relates social networking and visual culture.” 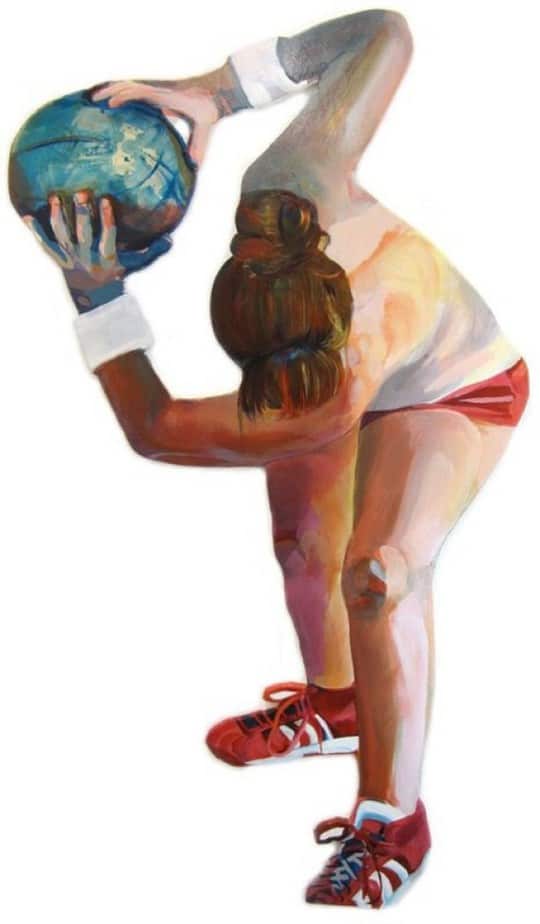 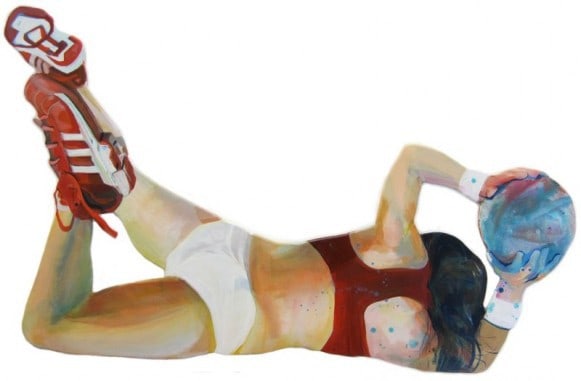 You seem to retain a sporty motif with both Locker Room Tableau and your Dribble Prints, are you a sports junkie of the sorts?

“Absolutely! I grew up in Zumbrota, Minnesota – a town of 3,000 people – where my passion for basketball began at a young age. I have memories of chilly fall days, playing in my driveway, when it started to get dark early. Iʼd turn on the headlights of my parents car and run drills in my “strength shoes” – remember those? Iʼm not so sure the shoes worked, but I did eventually make it through four years of college basketball. Now I run marathons – next up, New York City on November 4th!

Most of my work is an extension of myself: a woman, artist and athlete. My dad, MFA Graphic Design, Indiana University and MA Painting, Mankato State University, and also a former basketball coach – always said to “do what is truly you.” This is something Iʼve taken quite literally in much of my work; for example, using myself as subject or adapting some of those familiar drills from my driveway to create spontaneous mark-making with a basketball.” 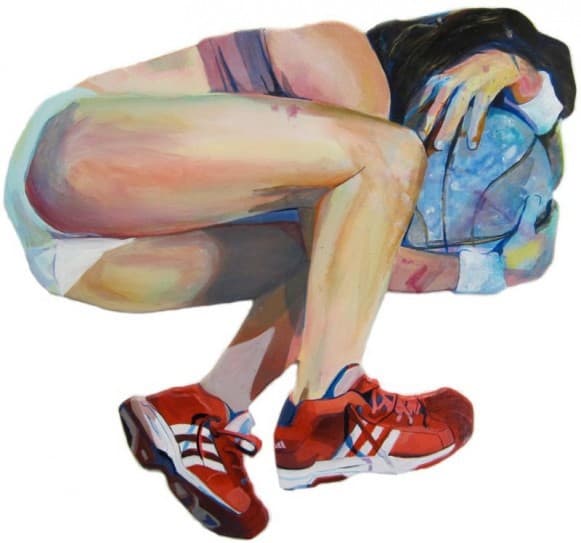 Overall, Holly Grimsrud’s work plays coy but secretly engages its audience in a honest conversation about who we really are as a society. She lures you in with the promise of panties and voyeurism but instead provides an enrapturing experience that leaves her audience in a state of purposeful  questioning.

What would you like your audience to take away from your work overall?

“I want the work to be accessible to a broad range of people – teachers, students, custodians, athletes, artists, gallerists, art historians, etc. I want this broad range to see how connections between athletics, art and social life can be translated into visual art. I hope they see art, which is visually interesting and critically engaging; art that inspires them to view more work, tell their friends and write me if they have any feedback about the things they see and question.”