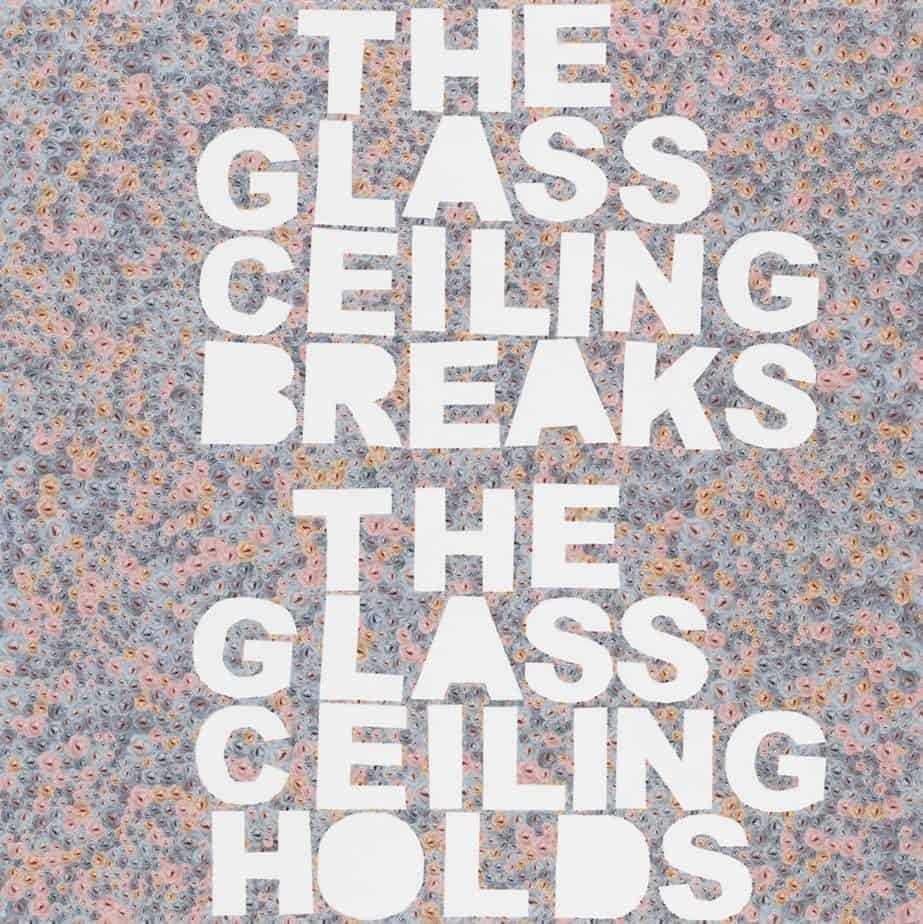 Isabella Huffington’s self-titled art show at Anastasia Photo on the Lower East Side could have been called Just Me or Nevertheless… or, in a decidedly more straightforward approach, Women in Politics and Power. It’s an overtly political show from someone who, as you may have already surmised, carries a weighty surname that has become synonymous with hard line, left-leaning political discourse. Similar to the artist’s trailblazing mother and the paradigm-shattering news aggregating site she birthed, Isabella and her intricate collage works bear a certain lightness; an aesthetic playfulness that makes the whole thing a bit more accessible to the average art viewer and political layperson (Do these people even exists anymore?).

“I’m the opposite of an art snob,” says the breezy and delightfully whip-smart Huffington. “What’s the easiest point of entry? I was someone who liked Twilight, only in that it got young people reading.”

Make no mistake, the younger Huffington, a Yale grad and self-professed type-A introvert, while impeccably mannered, is a fast-talking force of intellectual prowess capable of leading her audience down a unique and complex political rabbit hole, a descent belied by a rather obvious thematic object, symbol, or face, repeated exponentially on the canvas’ psychedelic surfaces. After entering into Anastasia Photo’s ground floor space, a counter-clockwise tour of the exhibition brings you on a full-circle journey of primarily American micro/macro sociopolitical maneuvering, missed opportunities, great expectations, major disappointments and surprise successes, leaving you with a beleaguered but enduring sense of optimism.

“The theme started formulating in October, before Hillary lost,” explains Huffington. “As you could imagine, I was expecting a different outcome. The show was supposed to be: ‘Look how far we’ve come-how much this country has changed…’ ” 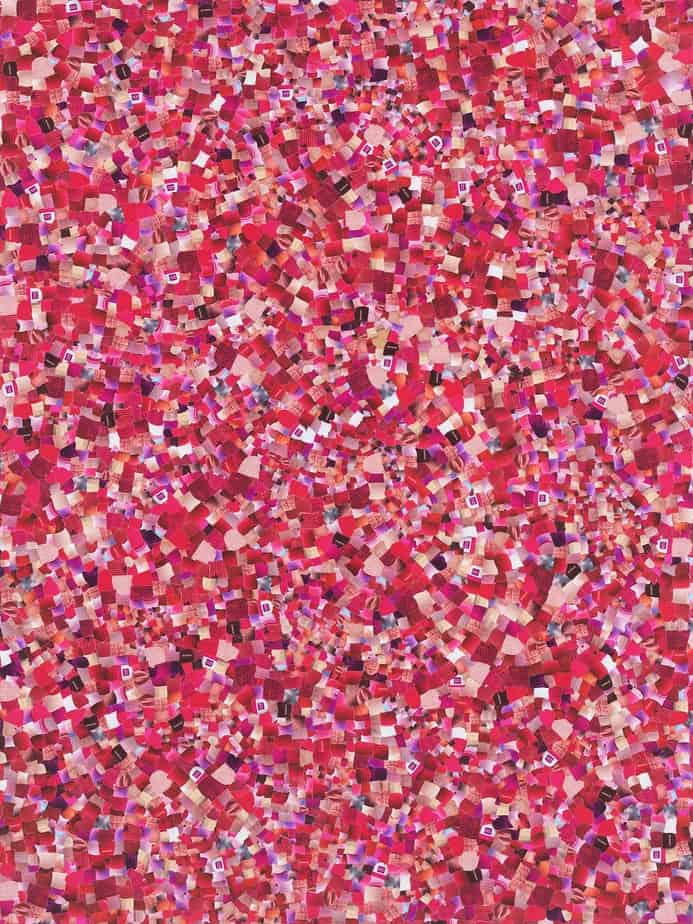 The tour of the exhibition began with Pussy Hats, 2017, a candy-colored collage on wood featuring thousands of miniature, cutout, pink and red images of “pussy hats” worn during the Women’s March in Washington, D.C. on January 21, 2017. “One woman made this hat for a friend and somehow it went viral, becoming a huge symbol of the resistance,” explains Huffington. The work is a fitting launching point for the show, as it speaks to the tipping point possibilities of seemingly insignificant political participation. On another level, Pussy Hats is a not so secret commentary on the often-misogynistic dismissal of, not only collage, but also fiber art (crochet, etc.) as a lesser form of artistic expression. Both mediums are often relegated to the decidedly more effeminate sub-genre of arts & crafts. Huffington seems to be acknowledging that in an age of patriarchal infallibility, getting a bit crafty can actually be a valid, perhaps even necessary approach to surmounting Orwellian obstacles and increasingly fascist leanings.

“I think some people still think collage is something you do with your girlfriends when you’re eight-years-old during a sleepover,” says Huffington. “I wanted to do something that’s accessible to anyone. If you’re a kid with no money, you can buy a magazine, a pair of scissors and a glue stick and make a collage, as opposed to something like oil.”

Perhaps collage is becoming more vital for another reason, in that it speaks directly to the vast amount of chaotic, fragmented, scattered, ephemeral information flying at us at breakneck speed. It may be the most accurate medium at the moment to comment on this global ADD, social-media landscape. Though Allison Zuckerman’s recent exhibitions at Kravets Wehby Gallery, Act Natural—which sampled various classical and modern art references into fresh, insane, painterly compositions—exemplifies millennial anxieties and speaks to both over-consumption and nostalgia, it still feels like work made in a bubble.

MoMA’s subway ads for its current exhibition, Robert Rauschenberg:  Among Friends, featuring collage depictions of JFK and other cultural and political figures, seems to be making this clear generational parallel, noting that collage, perhaps more so that Rauschenberg’s other mediums, which are also represented in much of the retrospective, are the most accurate in illustrating the anxieties of his time. In 1959, Rauschenberg wrote, “Painting relates to both art and life. Neither can be made. (I try to act in that gap between the two.)” Collage, on the other hand, seems to be a step away from this “gap,” a metaphysical space that many artists speak to, often in a spiritual capacity, in an effort to return to something decidedly more human and earthly, most likely due to an urgent need to process life in a more literal capacity in order to create a more immediate political response. Even Bob Dylan created collages as an aggregated information tool to create a timely visual architecture for his political folk jams.

“It’s also more of a group process,” adds Huffington, still speaking to collage’s often unspoken collaborative nature. “A painting is just the painter and the canvas; a collage is you and the thousands of people who worked to create the images you’re repurposing. It’s much more about people coming together instead of an individualistic thing.” 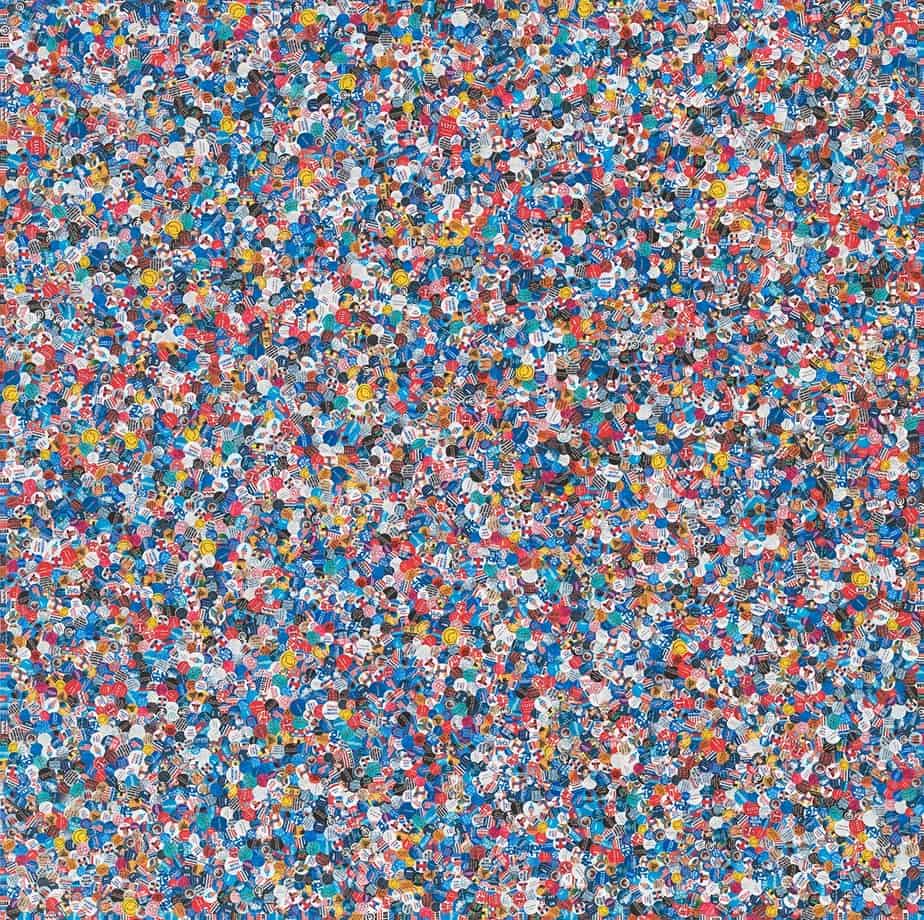 In With Her, 2017, another collage on wood comprised of hundreds of Hillary Clinton campaign buttons, Huffington delights in repurposing the works and ideas of hundreds of artists who contributed to Clinton’s campaign message and marketing efforts. “My favorite (button) is one that says, ‘I Believe In Science.’ Only in America do conservatives not believe in climate change. Even the Tories in the UK believe in climate change.”

All Eyes On You, 2017, is one of Huffington’s more haunting pieces. The work, which boasts a hand drawn frame of notebook doodle eyeballs, focuses on an inner block of tumultuous, swirling, black, white and grey eyeballs belonging to the most powerful women in American electoral history. “After the election happened, we had all this strange energy… like people are watching you,” says Huffington. “The work is about holding citizens accountable. Elizabeth Warren, Pamela Harris, Debbie Wasserman Schultz; I didn’t want to include only powerful women that I agree with. I wanted to include women that I didn’t necessarily align with ideologically.”

Bouncing from one work to the next, Huffington will often speak to a childlike sense of unfairness. If millennials are the “Kid’s Table Generation;” still relegated to a place of subservience as the still-kicking, longer-lasting, semi-retired elder generation becomes increasingly removed (more religious, more fiscally conservative) while simultaneously wielding what’s proven to be sufficient political influence, how does one effectively transition into sociopolitical self-sufficiency, while remaining in many capacities vulnerable to policies catering to outdated modes of thinking? “That childlike sense of unfairness, the instinctual ability to see right and wrong, it’s so visceral. I feel that all the time with this administration,” says Huffington. “Should Neil Gorsuch have the Supreme Court? No way! That’s totally not right. It’s unfair.” 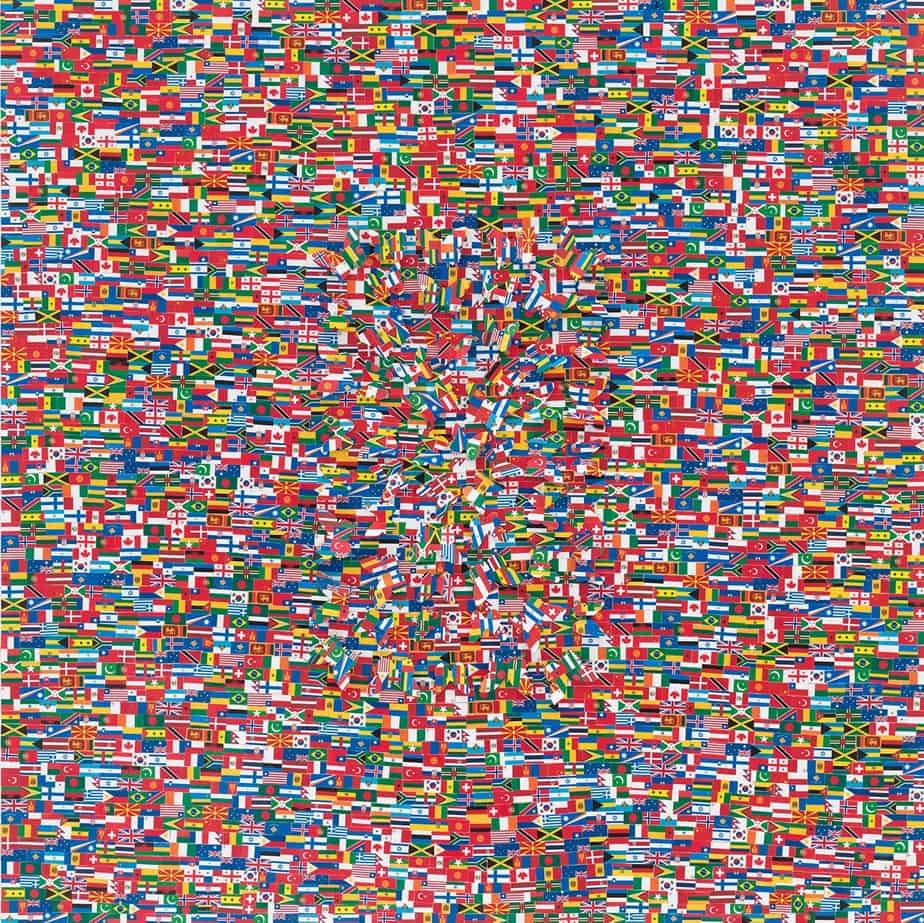 In this same respect, see climate change, the travel ban, net neutrality, Internet privacy, or that repugnant, surreal image of a bunch of white guys polluting and treading on women’s reproductive rights. Not one single woman in the room—how is this legal, let alone fair? In 79, 2017, a primary color smorgasbord featuring intricately cut flags from nations with current female heads of state, Huffington provides a survey of just how far behind we are in equal representation. “79 countries have had female presidents or prime ministers-Bangladesh, India,” she says. “America always thinks they’re on the front lines of everything, but we’re very much behind and not just industrialized nations.” 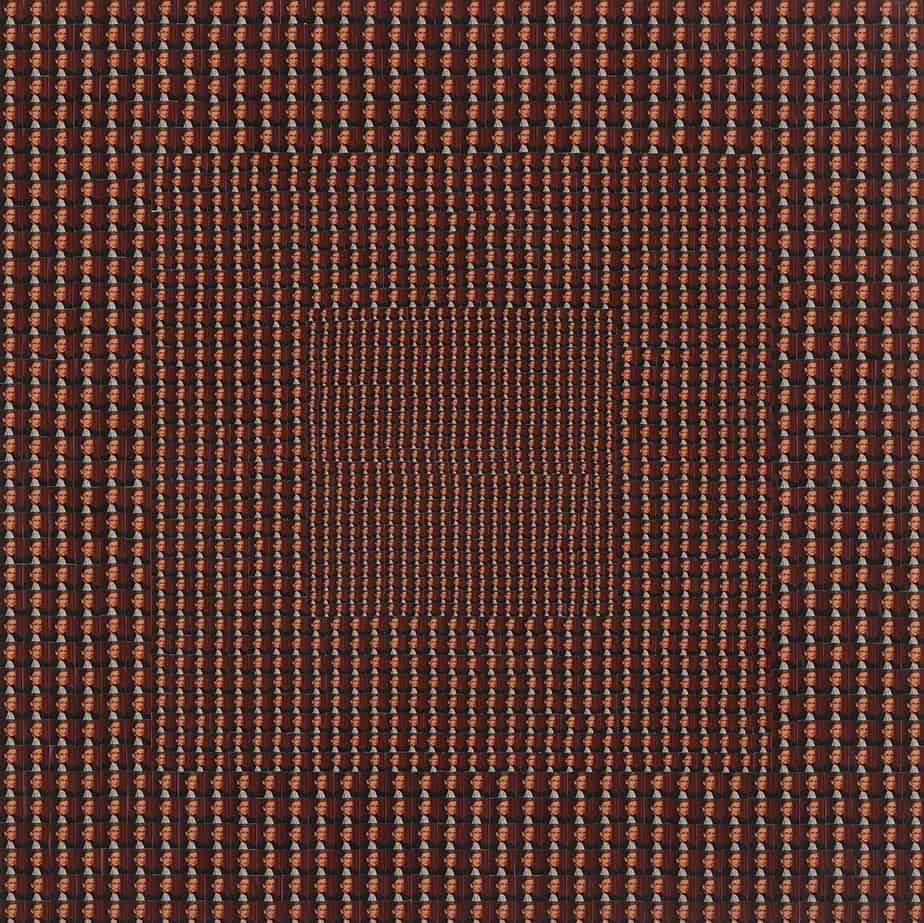 In Ruth, 2017, a repeated image of Ruth Bader Ginsberg, which cascades in on itself like a descending, concave citadel, leans on the second woman ever to be anointed to the Supreme Court, asking viewers to recall her famous quote: “Women belong in all places where decisions are being made… It shouldn’t be that women are the exception.” Huffington also composed a companion piece, Madeleine, 2017, which celebrates The United States’ first Secretary of State, Madeleine Albright. The work is an ominous, interwoven lattice that exudes strength, while speaking to the aforementioned craftiness of basket weaving, in this case. Huffington’s work echoes Albright’s recent statement regarding female solidarity, which insinuates that there’s a special place in hell for women who don’t support other women.

The playful construction of Huffington’s show—the medium, the execution—in a way, embraces the “kid’s table,” perhaps imploring millennials not to graduate necessarily, or join, supplant, or overtake their parents, grandparents, and aunts and uncles of the world, but to release the kid’s table from mothership bondage. Are we not presently being taxed [screwed] without proper representation? Is our future and freedoms not, at this very moment, being sold out due to ignorance, fear, toxic traditions, and gross, short-term corporate greed? Huffington’s playful but insightful show is a subtle call for a generational Neverland Tea Party; that 8-year-old sleepover revolution, where parents are comatose and anything is possible. Who better than Isabella to serve as an artistic avatar, asking us to embrace the factors and potentiality that make this generation incredible, while simultaneously placing enough self-scrutiny and accountability on oneself to effectively take the reigns?

Before you answer, it should be noted that Huffington is certainly sophisticated enough to acknowledge her own privilege and unique experience, not just as a young white woman, but also the daughter of a highly influential media mogul, whose shadow certainly looms large. Even on the left, as a singular bubble, marginalized voices experience this same frustrating unfairness and myopia. “I think, for women who come from a place of privilege-listen,” says Huffington. “I think the issue with white women in feminism, especially, is they’re not listening to what other women are saying, almost trying to speak for everyone. One should ask, ‘How can I support them?’ not how can I speak for them.”

Like any artist, and this is why it’s valuable to honor anyone’s experience, Huffington, without a doubt, has an extremely unique and interesting perspective. Her platform and voice should be encouraged, bolstered, not criticized or diminished due to her apparent privilege. “I grew up with four women and went to all-girls’ school until college,” she says. “Sexism never really made its way in. I never thought I couldn’t do anything because I was a woman, simply because that wasn’t my experience growing up. When I got to college it was a very different environment.”

Huffington is sliding comfortably into her niche as a working artist and currently has no interest getting into politics directly. She recently opened another exhibition on April 28th at Rebecca Minkoff’s gallery space directly adjacent to the designer’s Melrose Avenue store. The show has a more intentional fashion bend, is a bit more conceptual, considerably less political and is heavily influenced by Japanese artists Yayoi Kusama and Haruki Murakami. It will be interesting to watch Isabella Huffington evolve over the next few years, as both an artist and potentially powerful international voice. “Use what you’re good at and help other people,” she says. “We all have to use our skills. We need people on the front lines, but that’s not where my skills are.”