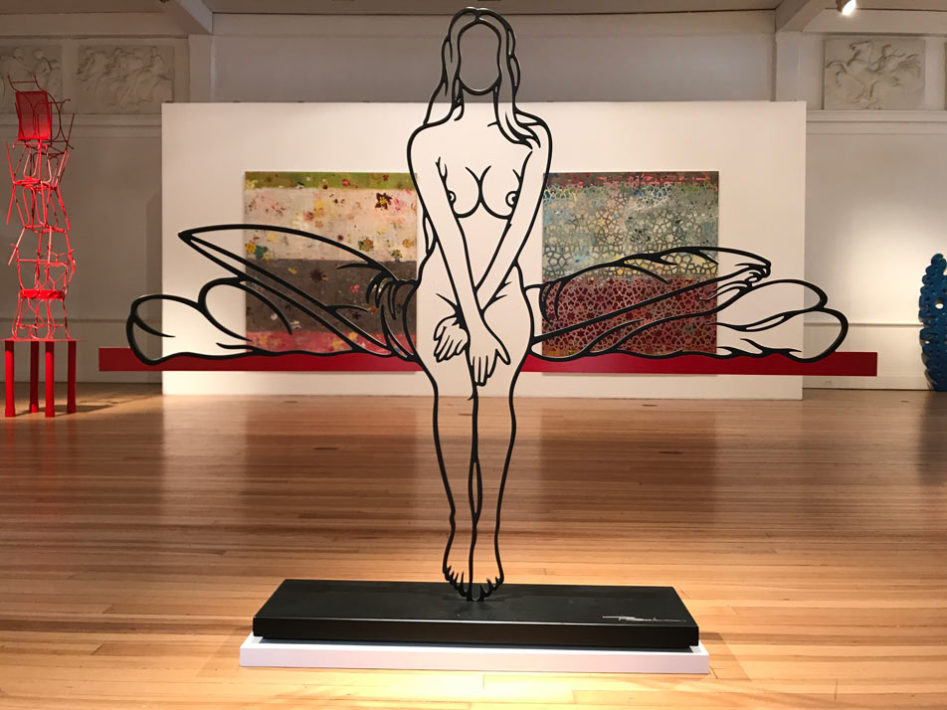 As a prelude to reopening the space that is now home to the Southampton Arts Center, East End Collected1 launched, with Mr. Miller at the helm. He included his own art—Mr. Miller is an oil painter with a vast oeuvre—in the show with the vision of a one-time experience that East End art patrons could enjoy. The show was an unexpected success, and it was decided, nearly immediately, that Mr. Miller should curate subsequent shows, also highlighting the work of local artists. Since its inception, the East End Collected series has shown approximately 130 artists, with no repeats. 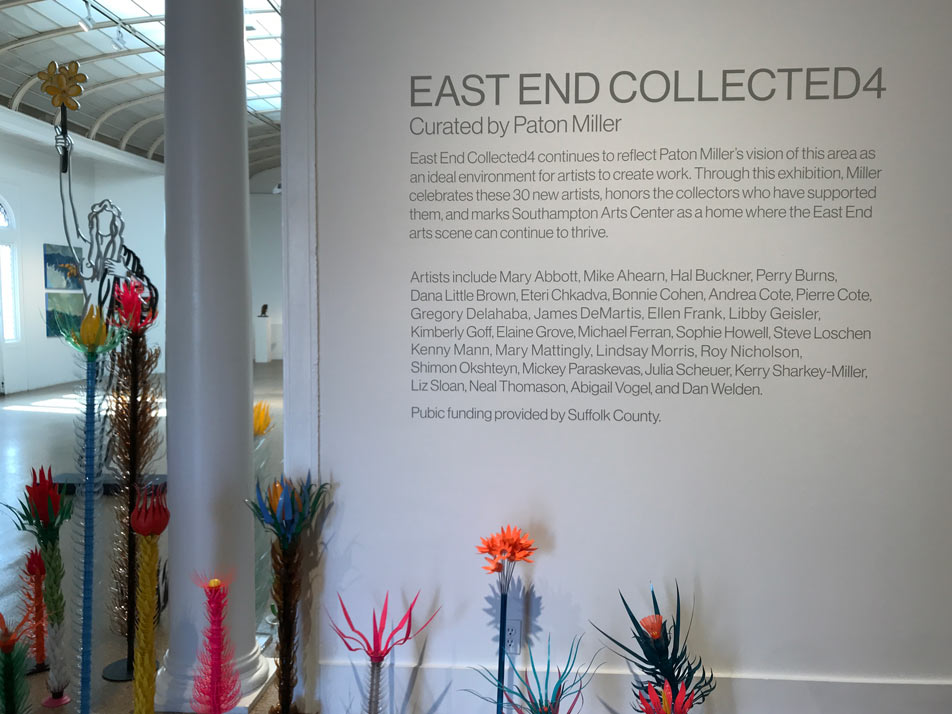 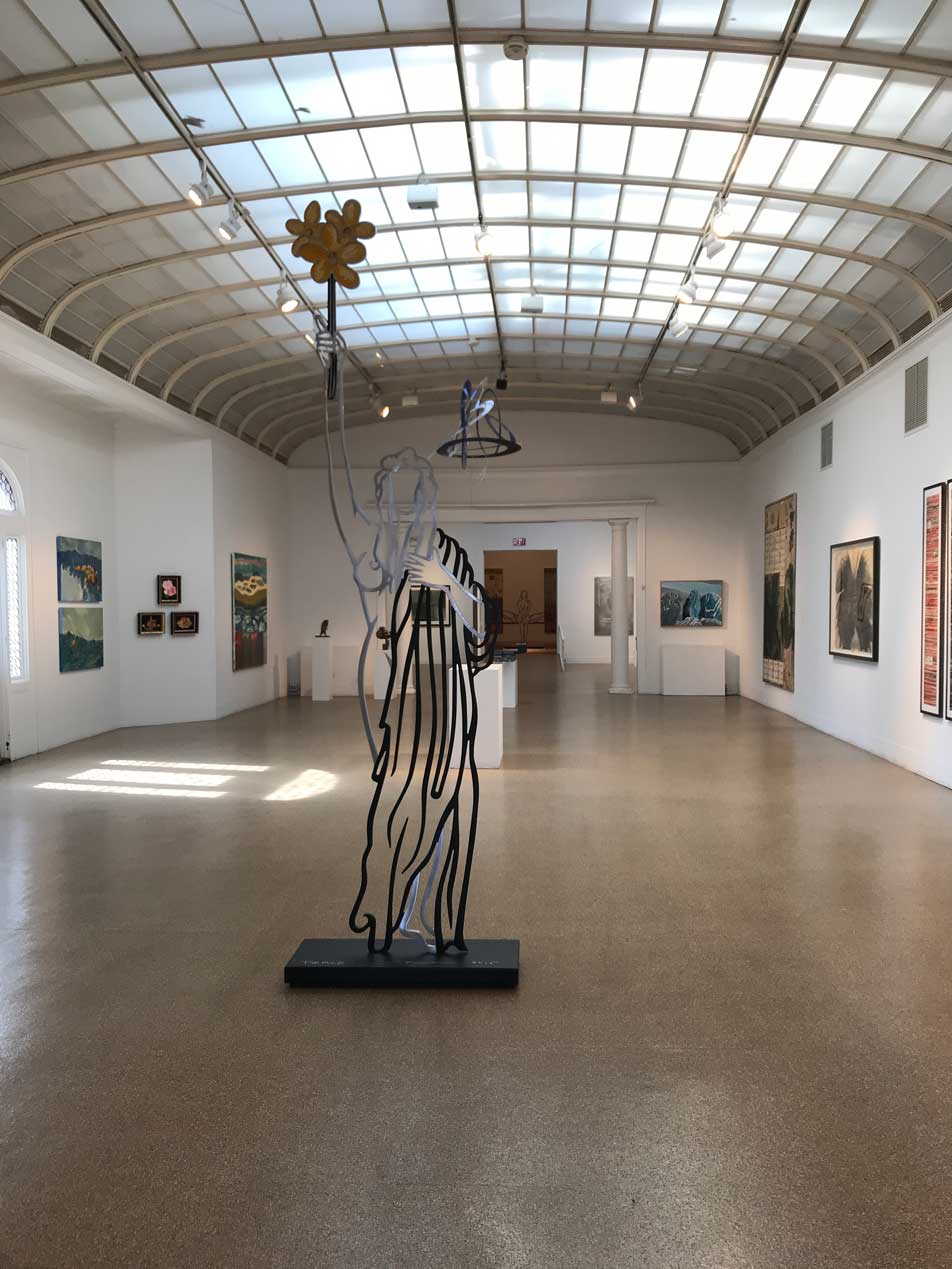 This year, as in many other years, the East End Collected features both established and new artists, with a diverse set of skills and backgrounds. Take, for example, Shimon Okshteyn, a classically trained artist who hails from Russia. Mr. Okshteyn has shown his work all over the world. In the exhibit’s main foyer, one of his oil paintings, a massive, classically inspired piece entitled “Still Life with Damien Hirst Skull,” towers. It’s a cheeky invocation of Old World technique and New World cultural art iconography (Hirst may be best known for his animals suspended in formaldehyde, which featured prominently in the Sensation: Young Artists from the Saatchi Collection exhibit that ran at the Brooklyn Museum between 1999 and 2000.)

Because the physical space of the Southampton Arts Center is vast and high ceilinged, Mr. Miller believes that a combination of hung art and sculpture round out each show. To that end, the impressive works of Elaine Grove (“A Seat at the Table Chairway to Heaven”), Gregory de la Haba (“Totem Wave #1,” “Totem Wave #2), Sophie Howell  (“Babboon Masks 1-5, NAISULA”), Mary Mattingly (“Swimmer, 2014”), and Hal Buckner (“Puberty #3,” “Peace, 2015”) offer texture and balance. 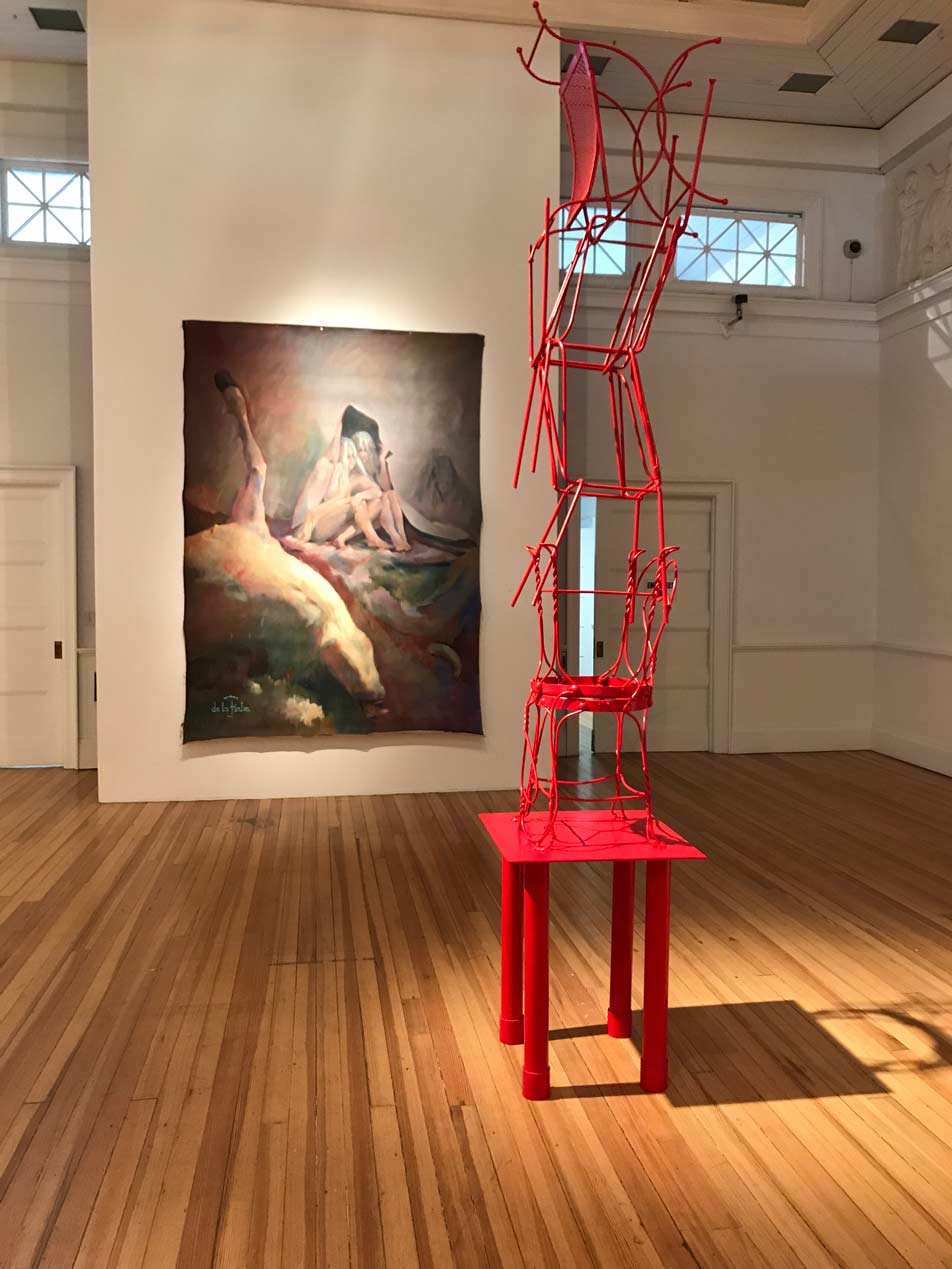 Elaine Grove, A Seat at the Table Chairway to Heaven 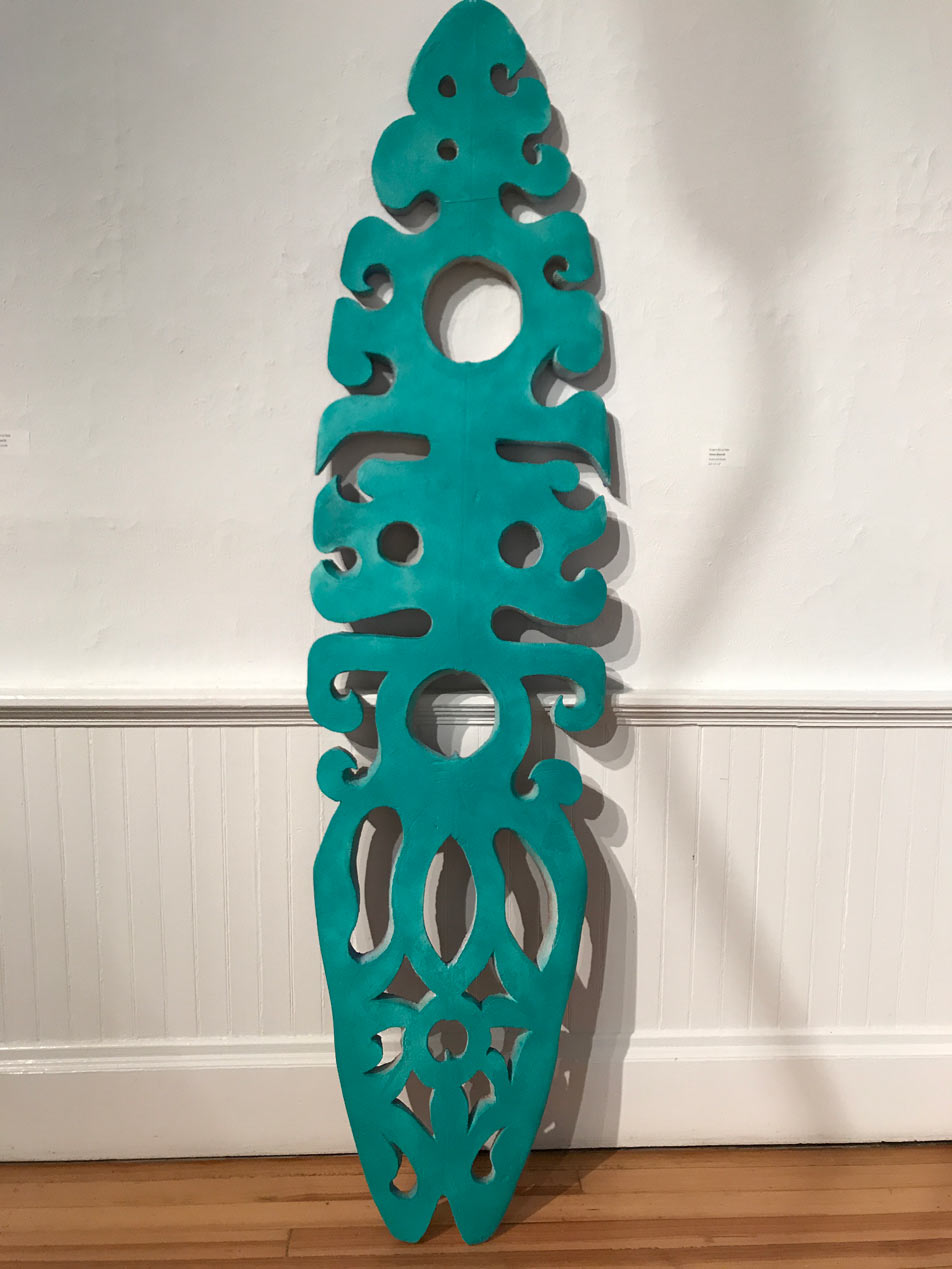 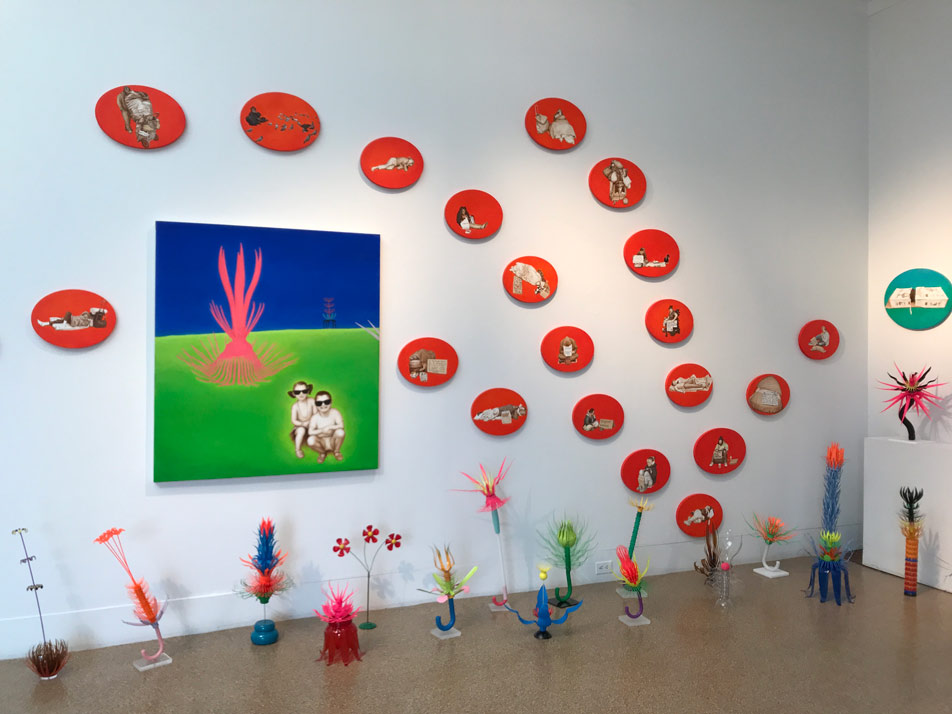 Ms. Grove’s stacked welded steel chairs in cherry red dominate an entire corner of the room, reaching upwards towards the skylights, while Mr. Buckner’s “Puberty #3” frames two wall-dominant works in the gallery’s cavernous back room. Ms. Mattingly’s “Swimmer, 2014,” occupying prime real estate in the center of the main gallery, is a stick figure rendered mobile in blue painted aluminum. The sculpture shimmers in the gallery light, a true homage to the water.

Mr. de la Haba’s makeshift totem poles, crafted from foam surfboards and leaning against the gallery’s bead board, are a particularly poignant visual moment, recalling both the surf culture intrinsic to the East End, as well as surfing’s Polynesian backstory. It’s transportive art, willing a closer look at Americanized surfing culture and the forces that shaped it.

Another showstopper is newcomer Michael Ahearn’s portraiture. His twelve portraits, composed of oil stick on paper, are each 12” by 17” and hang collectively on one wall. They’re a diverse look at humanity, and display both a fundamental understanding of the form and an almost childlike fascination with the human face. 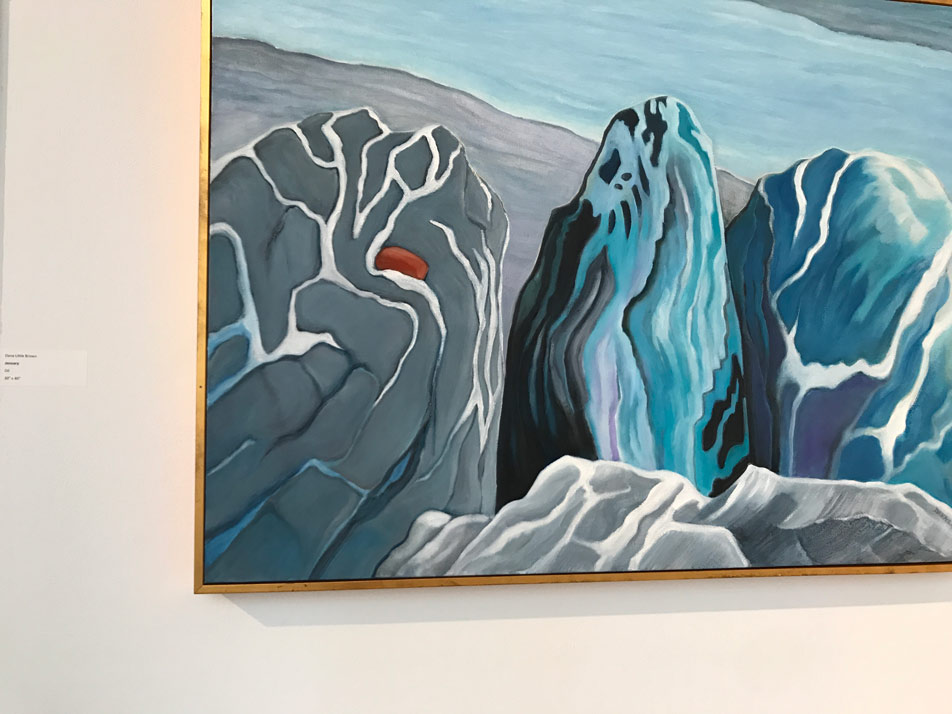 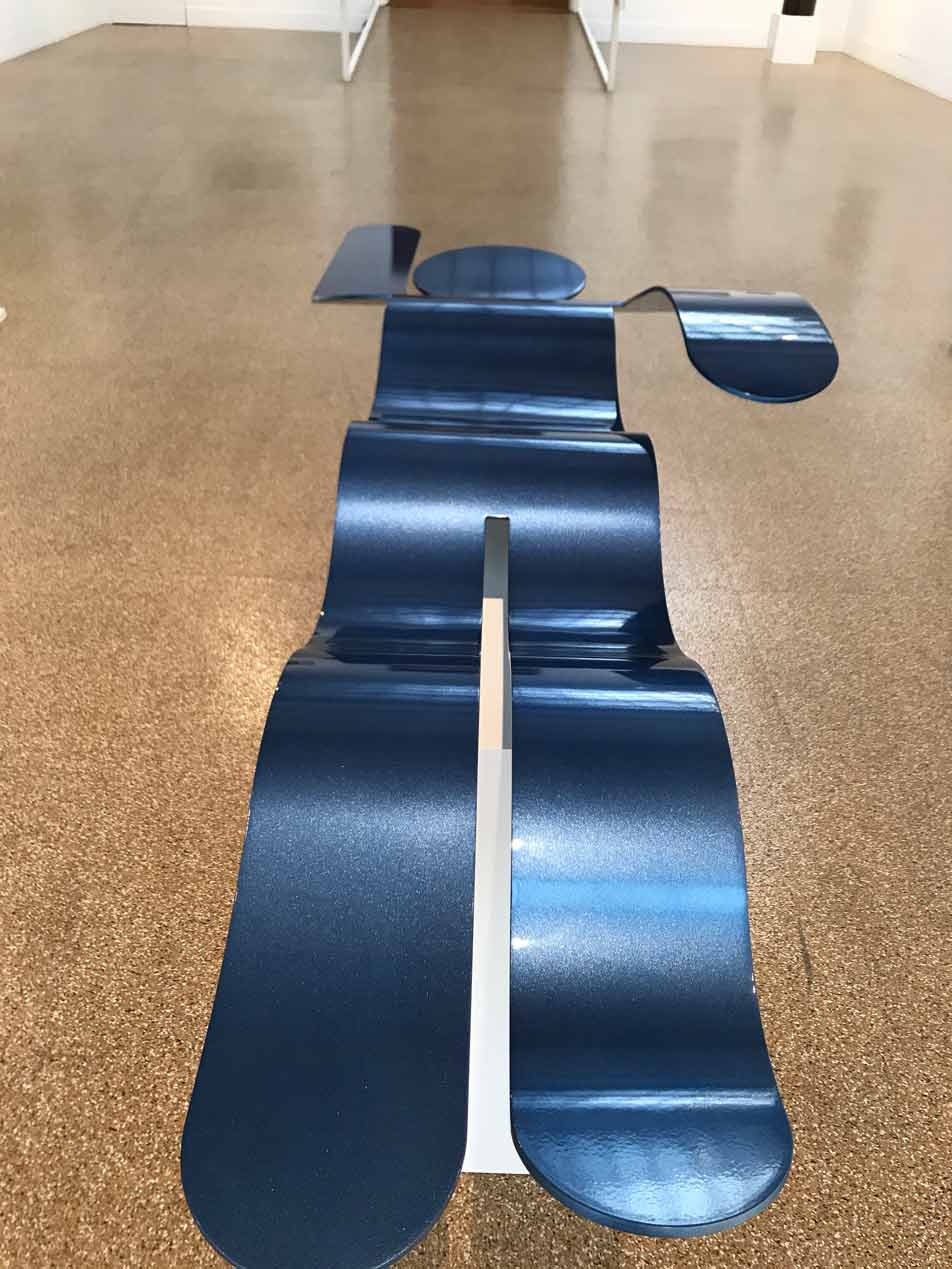 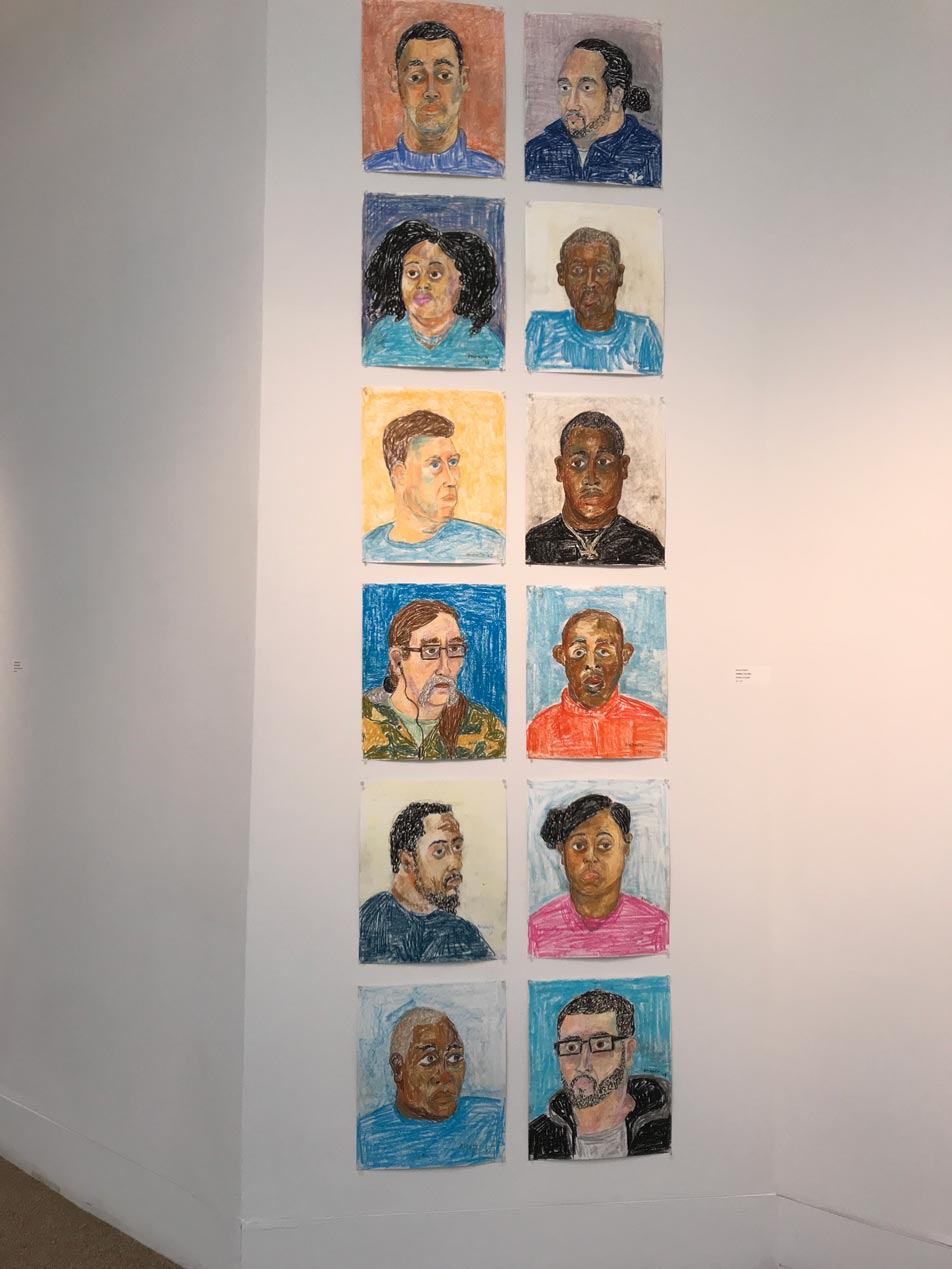 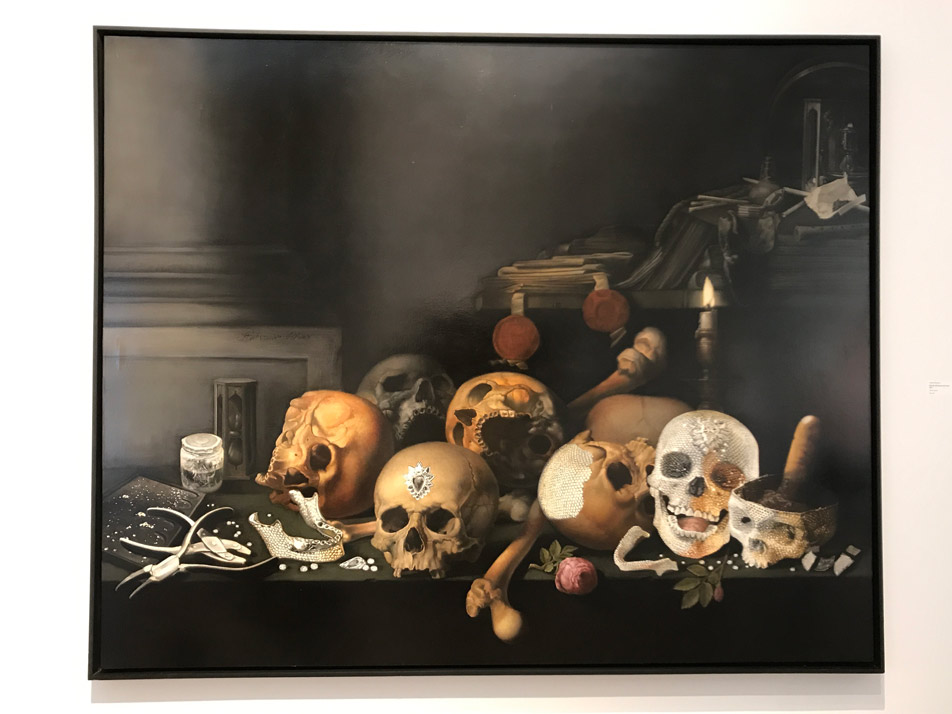 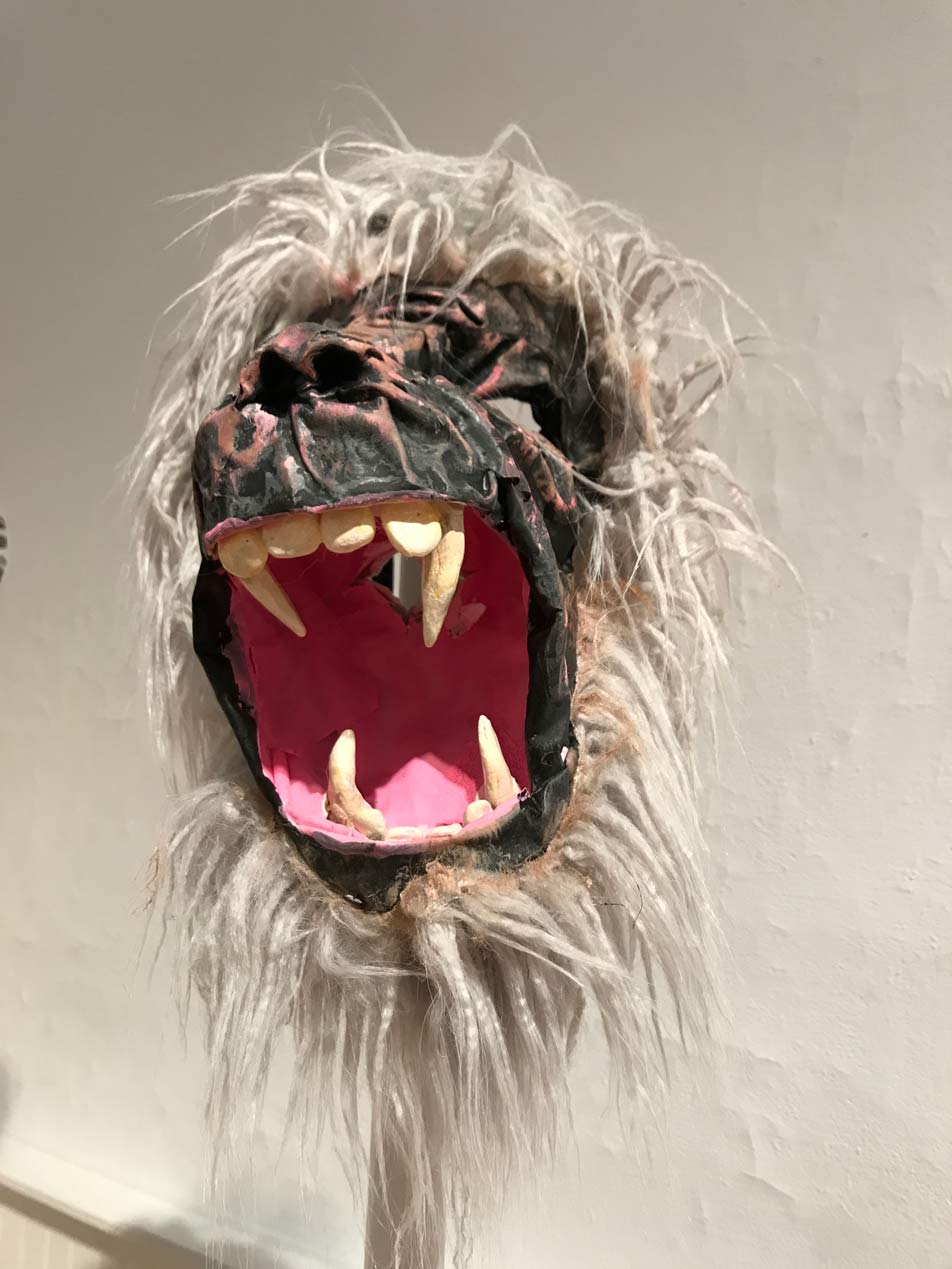 The collaborative work “Allen Bloom,” by artists Eteri Chkadua and Gocha Chkadua, Georgian immigrants, is composed largely of plastic disposable bottles. The installation occupies a large wall in the gallery’s main room and incorporates letters, paintings, photographs, lights, videos, and sculptural “alien” flora that resemble the most vibrant tropical bromeliad. The installation refers to the “post-industrial landscape,” a commentary on possibility in the age of disposable things.

The exhibit, as a whole, feels comprehensive and inclusive. While Dana Little Brown’s “January,” oil on canvas in shades of gray and blue, may feel more traditional in nature, it stands in contrast to Sophie Howell’s staggering “Baboon Masks 1-5, NAISULA,” gnarling baboon heads on posts made from cloth maché, acrylic paint, faux fur, cardboard, and newspaper. It accompanies a film by Kenny Mann, entitled “Naisula: A White Woman, Her African Servant, A Shaman, and a Spirit Child,” a commentary on the Colonial relationships between white women and African servants. It is an impressive display of local artists, and one well worth exploring.

The East End Collected4 show will run through Sunday, May 20 and will conclude with a curator’s gallery tour and Champagne toast. Admission is free. The Southampton Arts Center is located at 25 Jobs Lane, Southampton and is open Thursdays through Sundays.