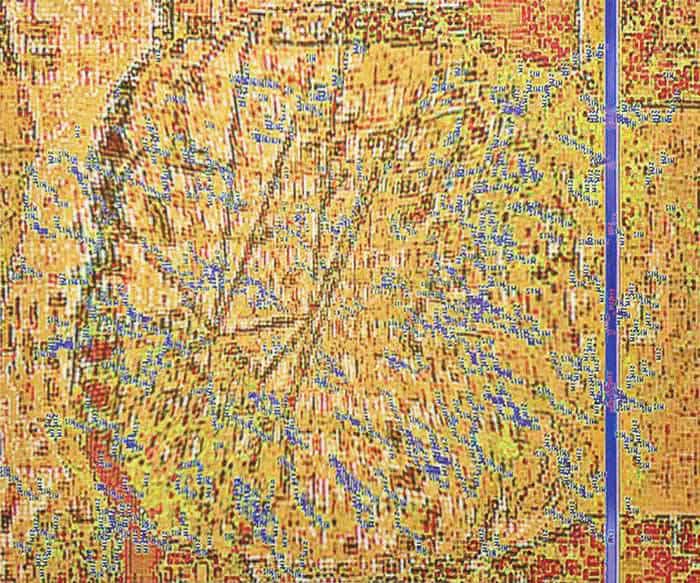 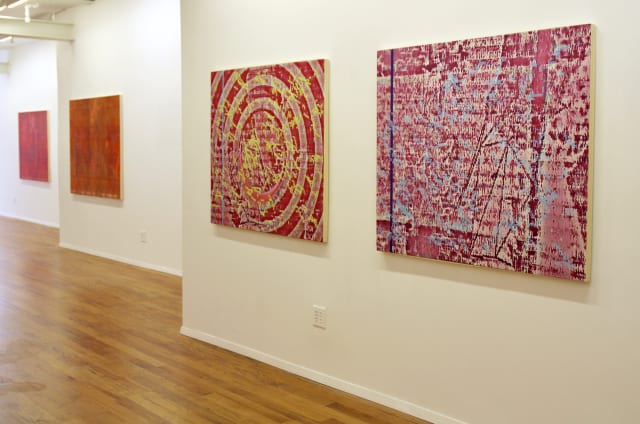 A retrospective view of Joseph Nechvatal’s sensual works is at Jean-Luc Richard’s gallery on Orchard Street, located just above Kenmare in the LES. These soft richly textured surfaces and images are not hand made but conceived visually in digital territory. Three works from 2017 are from the Return of Lazarus series; titles follow the series name, they are prOlOngatiOn, expeditiOn, and sublimatiOn. The three chosen to be realized by computer-robotic machines onto velour were from among thirty or more digital maquettes, composed while on a sojourn to a Thailand island. They are suffused with deep oranges, shades of umber and gold, brilliant reds and influenced in part by the milieu of a dominantly Buddhist culture. 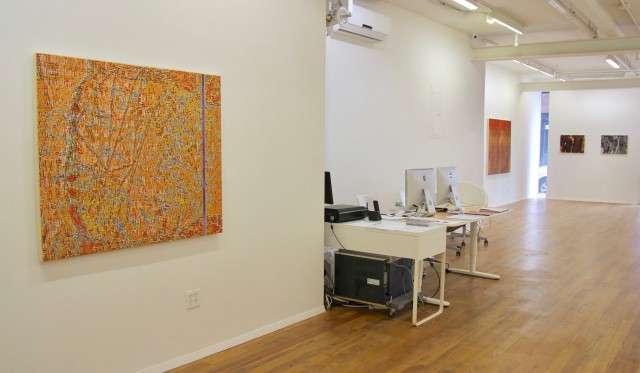 This micro retrospective ranges from the late 80s, to the early 90s and into the present, the general theme is “recovery.” An overall effect of the nine works on display shows the thread of code and programming to be at the service of the human condition. The earliest works in the show include, Hyper-Intersubjectivity and Networked Animus, part of the “Informed Man” series done between 1986-1989, one can discern the figure of Lazarus, with his bright shadow amid the decaying, corroded, scrambled and scratched imagery.

A post-conceptualist, Nechvatal proceeded on the assertion that painting was dead and he chose to bring it back to life with computers. Religion was not the point, but the miracle of recovering from injury and loss, and acknowledging the ravages of HIV and AIDS inform his work of the period. This was the time when the HIV virus and AIDS epidemic were full blown. Some Federal programs were established to study and combat the crisis, and ACT UP was in its most critically active phase (http://www.actupny.org). 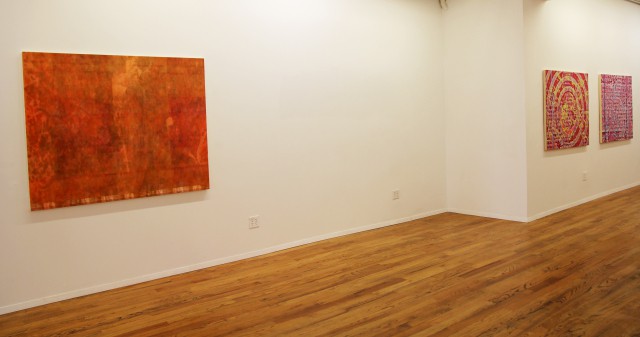 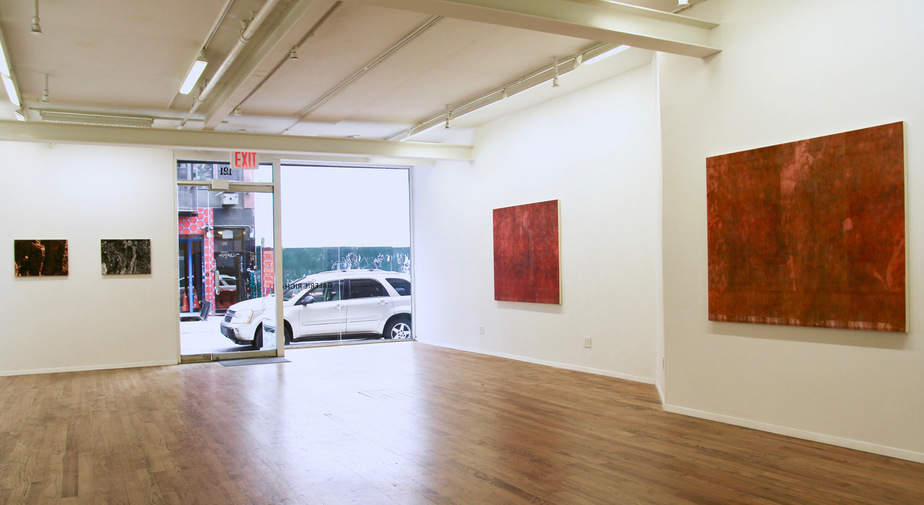 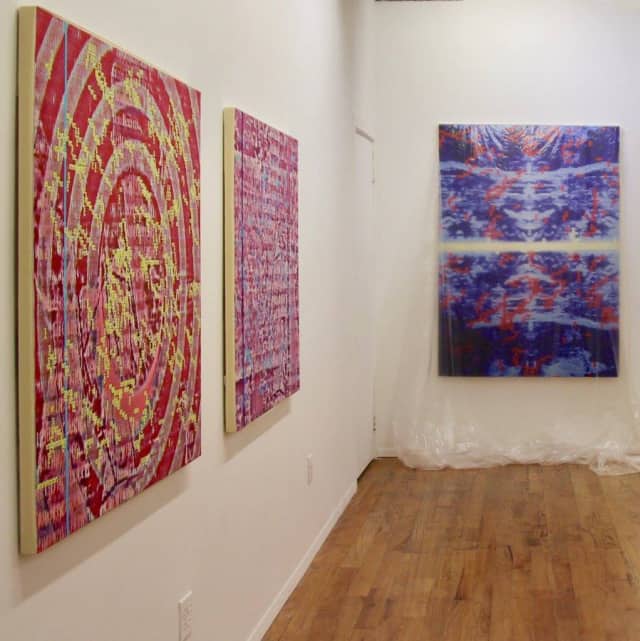 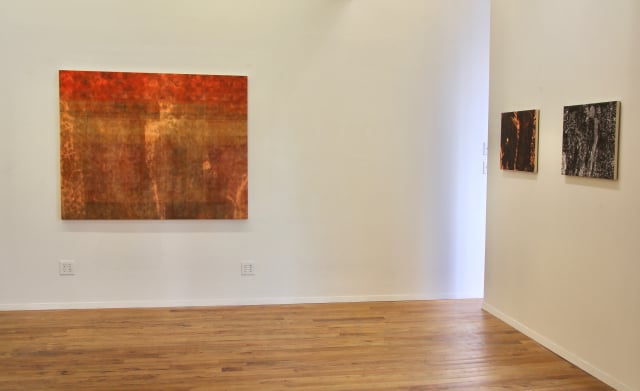 Using chance operations in a Cagean approach; Nechvatal first used the computer virus while an Artist in Residence at the Louis Pasteur Institute where he co-wrote a computer program to generate imagery, and working with a scientist at the Institute created the first viral attacks. In the viral attack series, known by the French term he invented as, “viral attaque,” Nechvatal introduced a precise line, a stripe with a nod to Newman’s Zip, to create a border, a delimitation in the composition. The viral element that was launched into the code looks at times like colorful stitching or fragments of a knit. There is a sense in one piece of a possible aerial view, and a map like feeling in another suggests data points. Then one can see that the virus crosses all borders without compunction. The brightly colored, dense yet light textures of these works are generated through digital code mixed with a number of sources including erotic poetry and the artist’s early fractal program.

These compositions are fundamentally mathematical objects that were brought to life as imagery. Living in the late 80s away from New York city, in the Jura area of France, and decades before moving to Paris, Nechvatal was involved with the French cultural project. It began with reading Rimbaud, Mallarmé and the French Symbolist poets growing up in Chicago, and following his move to New York continued with French philosophy and literature, especially Deleuze and Guattari. 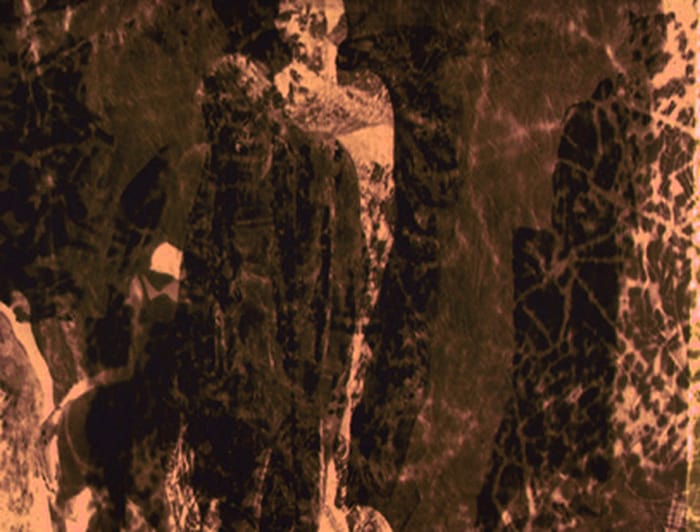 A poet and sound artist whose diverse works explore multimedia with a sensualist intent. Nechvatal’s book, Destroyer of Naivetés, published in 2015 was made into a recording that can be found online:

CAVE BACCHUS is made up of Black Sifichi, Rhys Chatham and Joseph Nechvatal http://entracte.co.uk/projects/cave-bacchus-e207

Nechvatal’s oeuvre is exceptional in that it engages digital media, a mental and immersive state, as a visual artist evolving from dense hand made drawings to robotically realized imagery painted on canvas or velour, in the domain of bytes. Addressing the super abundance of media at its basic level, since the beginning of digital media, this work merges the mental, emotional, intellectual and physical in generating paintings where thoughts, projected through robotic systems, enter the light as real things. 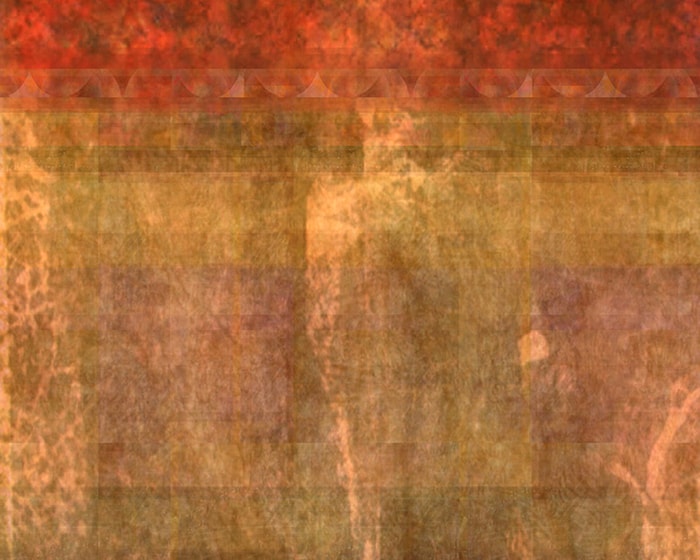