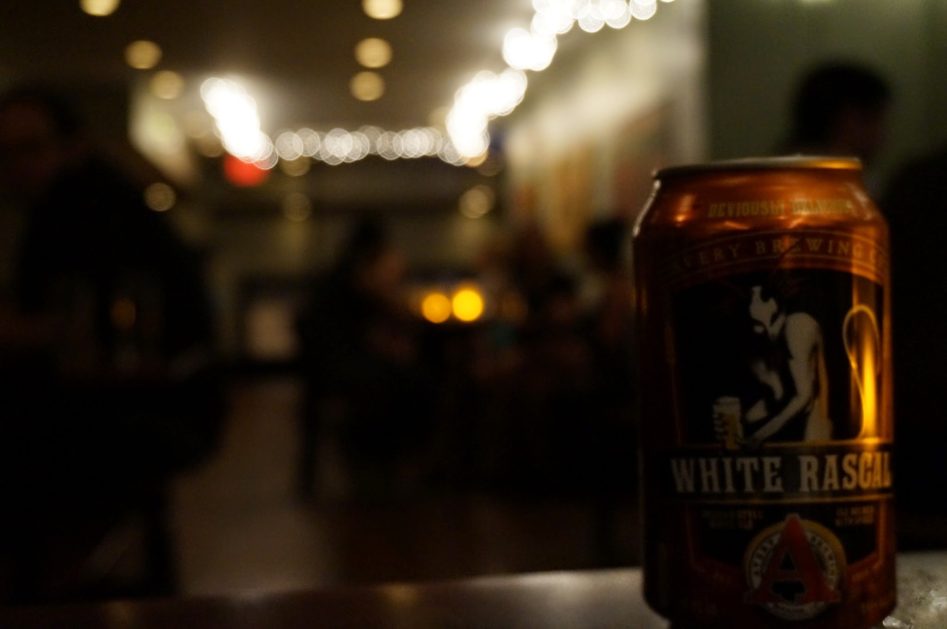 It was a relatively unusual Friday night in Cambridge. Maybe it was the rain and humidity, but the streets seemed lonely, like everyone had been driven out of town by some unknown force. Even the bars in Central Square, where lines usually stretchpast their neighbors, had clear doors. It had been a long day, but I was headed to TT The Bear’s to see two bands, recently fed, and recently caffeinated.

The first was Coaches, a relatively young band from Boston. They set up and began playing with little fanfare, almost like they were trying to begin before anyone had noticed. They were formerly We Avalanche, an acoustic trio using mostly stringed arrangements to play a more subdued singer-songwriter type of music. Coaches felt like they were trying to become something different, but could not free themselves of the spectre of what had come before. 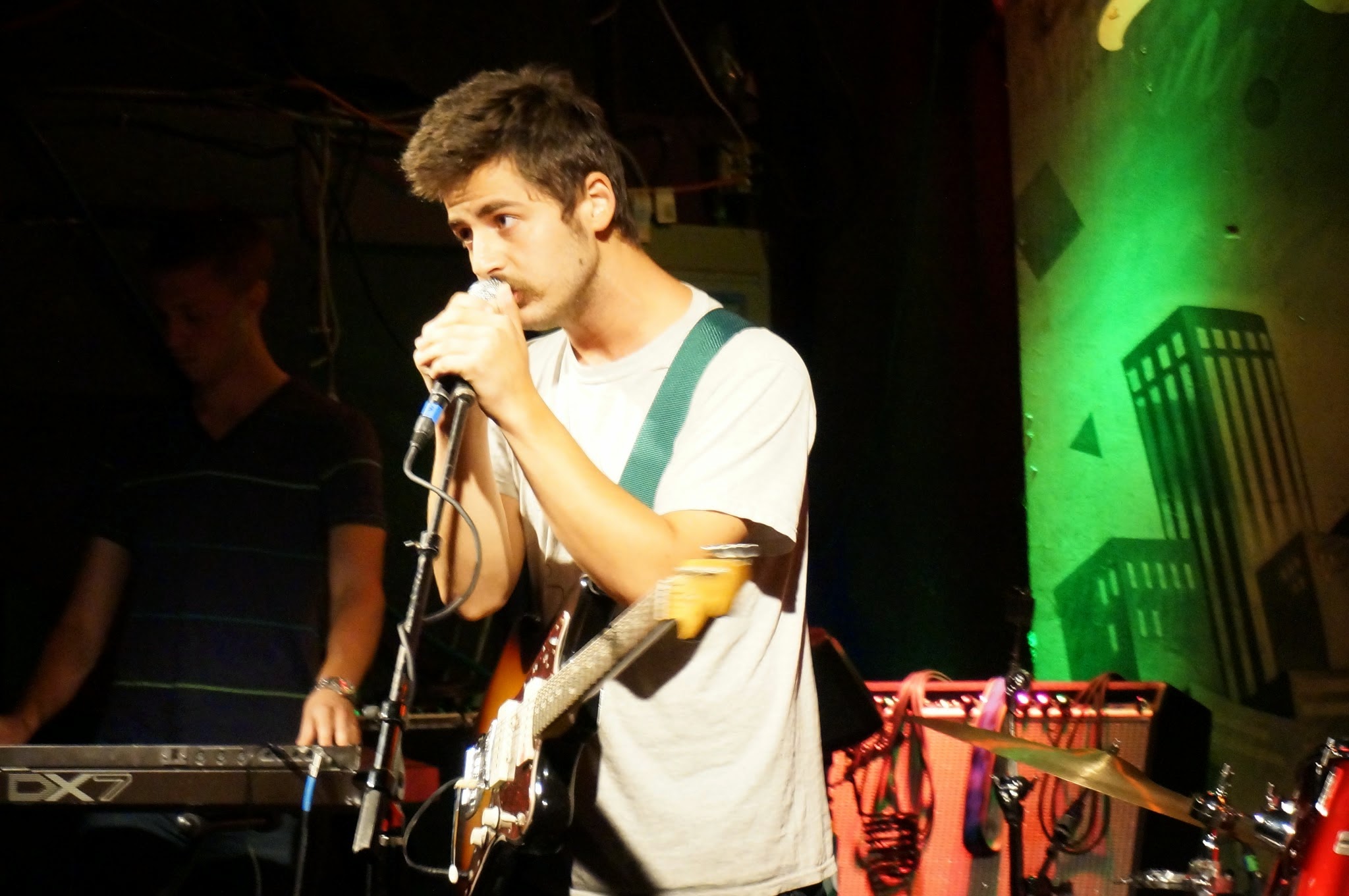 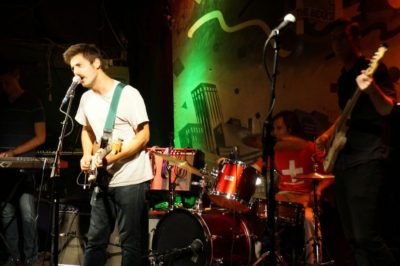 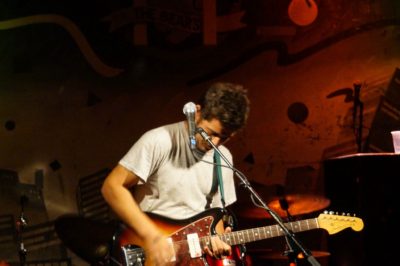 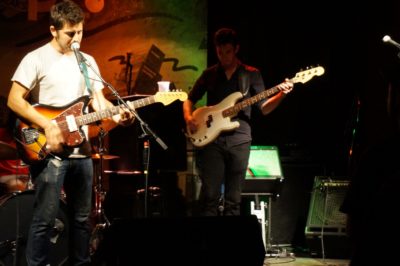 The songs lacked the sort of immediacy that a more well-worn band would have, like they were wandering without a place to go. Their sound was stuck between quiet acoustic trio songs on electric instruments walking in an Explosions In The Sky-type post-rock direction, but being led interestingly astray by noise punk. None of these things worked together well over the course of the entire set, but the artificial guitar squeals felt like they spoke louder than anything else in the room.

As their set continued, they burned-in. A few jokes were cracked, the crowd was engaged, and the band shed some of the apprehension that had held them back. The rhythm section hit harder, the guitars clanged through louder and the vocals were delivered with a screaming intensity that I had been waiting to see. The more they went on, the happier I was that they were playing.

Coaches sounds like a band at a crossroad: what do they want to be? If they move toward the intimate, they certainly have the experience to pull it off, and maybe throw in some varied instrumentation to make it very interesting indeed. But if they go louder, they’ll have another choice: the chaos of a noise band, or the building grandiosity of a mid-00’s post-rock, screaming towards an emotional climax. Even more compelling, if they can use their experience to build the intimate into the epic, this could be something to see.

A short set-break meant beers before Titanics took the stage. With an unconventional stage set-up, I was unsure what to expect. All I knew about them was that they were from Albany, had just toured up and down the east coast playing songs they were preparing to record shortly after the tour ended, and this was the last night of their trip. The time they had spent on these new songs shone through, as I did not want them to stop. This band would throw a fucking killer house party. 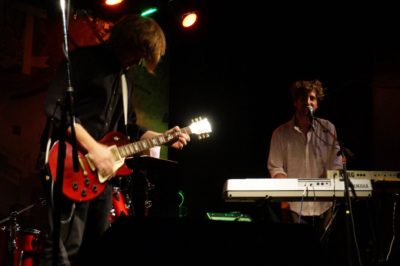 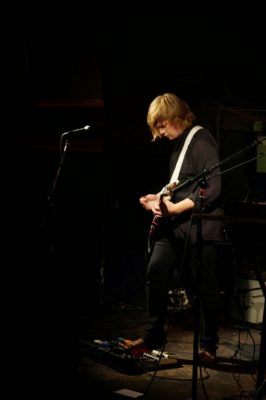 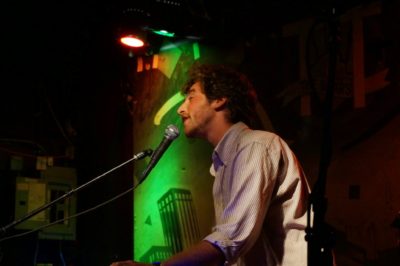 Titanics play as a two-piece: a vocalist whose hands are split between a keyboard and a sampler/sequencer with some electronic drum pads, and a guitarist who plays like he was doing his best Rick Wakeman impression… on a guitar. Given their heavily affected sound, “organic” is not a word I would use to describe Titanics, but this band feels as if they sprung directly up from the ground. I would not be surprised to learn that these two were born playing music together.

They started playing to an empty floor, like many bands unknown to their audience. But as they went on, the psychic barricades were trampled by the uptempo, major key energy of their music. The rhythm section gave way to a wonderful interplay between the vocals and the guitar, like they were talking to one another. Both members became part of the music: lost in their set and hoping the audience would join them. It didn’t take long before those dancing outnumbered the rest. With barely any breaks in the set, the energy level continued to rise until it hit a plateau about halfway through which they marched along for the duration.

Titanics’ name belies their sound; images of the ocean occur when their music springs to mind. Everything about them–their stage demeanor, their musical interaction, the music itself–was natural. Not to say it was the same, but like the ocean, each wave or movement of the tide felt like it was part of something bigger. Titanics have a new record heading our way shortly, and I’ll look forward to the day I can put it in my car, turn the key, and just let the upbeat essence of their music take me somewhere.