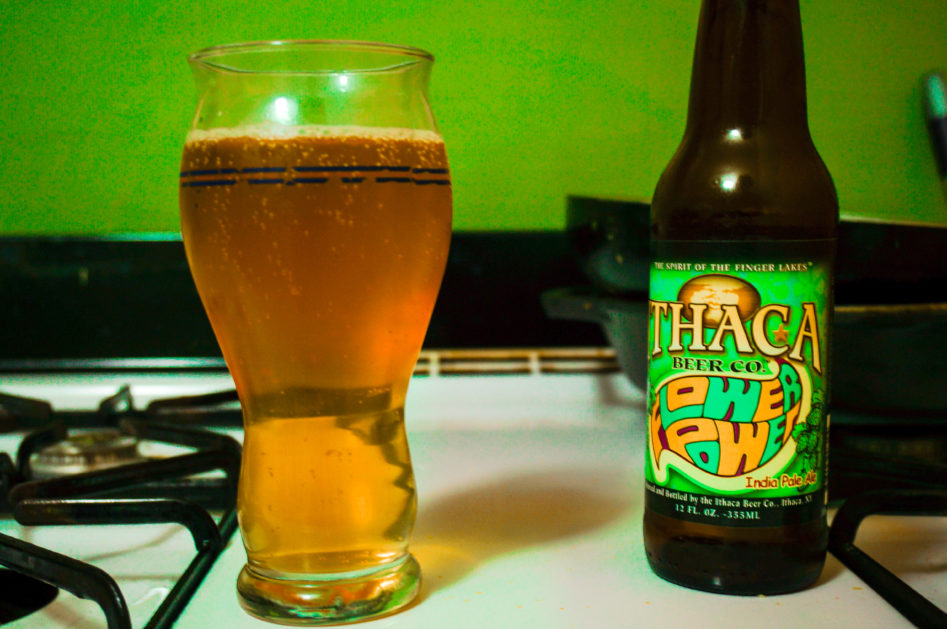 Flower Power IPA is a hop monster. It’s process is not to be taken lightly: most beers add hops once or twice during the brewing process, while Flower Power goes with five, using a blend of five different wet hops, and three dry hops during the later stages. What results is a hopped-up beer that manages to stay on the right side of its own bitterness.

Don’t get me wrong, I crave the right kind of bitterness. Every so often, someone buys some of Stone Brewing Company’s Ruination, invariable hates it, then unloads the remainder onto yours truly. Ruination manages to use the bitterness in the right way, leaving a complex heap of flavors in your mouth, along with the boozy finish. Unfortunately, Flower Power has the right ideas, but can’t quite pull them off.

The hops overwhelm in a strange way, bringing out all the typical flavors of an IPA, but not a whole lot else. It’s relatively medium-bodied, but doesn’t leave a lot of sweetness near the front of my tongue, nor tart acidity on the sides, almost moving straight to the bitterness.  Like a teenager rushing through the foreplay, Flower Power wants to steam toward the finish without realizing the rest of the experience is just as important. I missed any juicy sweetness or fruity tartness and instead was hit with a piney, floral dry-hop stampede.

Flower Power is generally well-received, so it seems I’m in the minority. While Flower Power was too focused on hops as an abstract rather than a living ingredient I preferred the recent Sierra Nevada Harvest Single-Hop Equinox IPA, using only one hop variety with the expertise for which Sierra Nevada are renowned. Flower Power is close, but a little more depth could take it a long way.