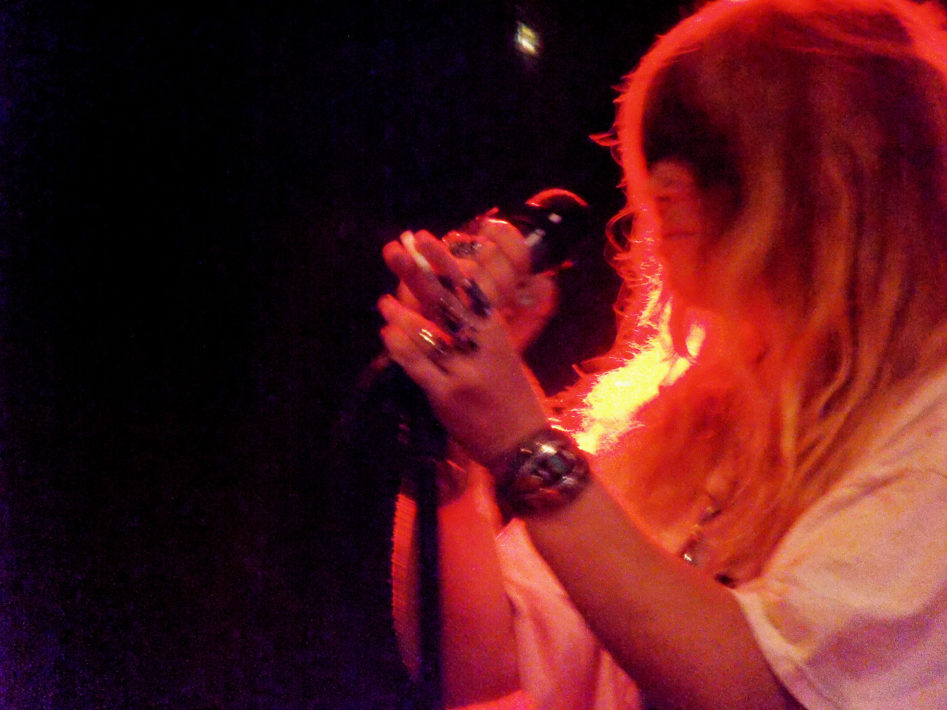 At the Black Bananas’ set on August 8 at South Street Seaport in Manhattan, the damn kids scampered about like damn kids often will. When the unabashed rock group eventually collected on stage, the children fell in line.

The Seaport stage, set nearby, but not directly on the seafront, is built on a flap of fake grass and surrounded by fancy boutique bars, restaurants, craft tables, and an Abercrombie & Fitch. The concert felt at first like a sideshow to an outdoor flea market and for most of the passersby, it was.

Shockwave Riderz, a three-piece band from Pittsburgh, opened the show. Still fresh in form, they currently have a 3-song EP and two split singles. Drummer Phil Boyd screeched vocals while bouncing up and down above his compact red set with each snare and tom-pound. Vashti Windish and Paul Quattrone added a smattering of backing vocals and effects evoking crusted daytripping moods. The perfect precursor for Black Bananas.

One by one Black Bananas casually collected on stage. One little girl stepped into the gate taking pictures as singer Jennifer Herrema walked with sharp-toed snakeskin boots to the center of the stage. Her expression was shrouded by her long burnt-blonde hair and aviators. Herrema wore ripped jeans and a large white shirt with the imperative phrase, “SMOKE WEED” framing a bright green pot leaf. The little girl gazed, her hands clasped tightly around the bars, holding on for whatever she was about to witness. 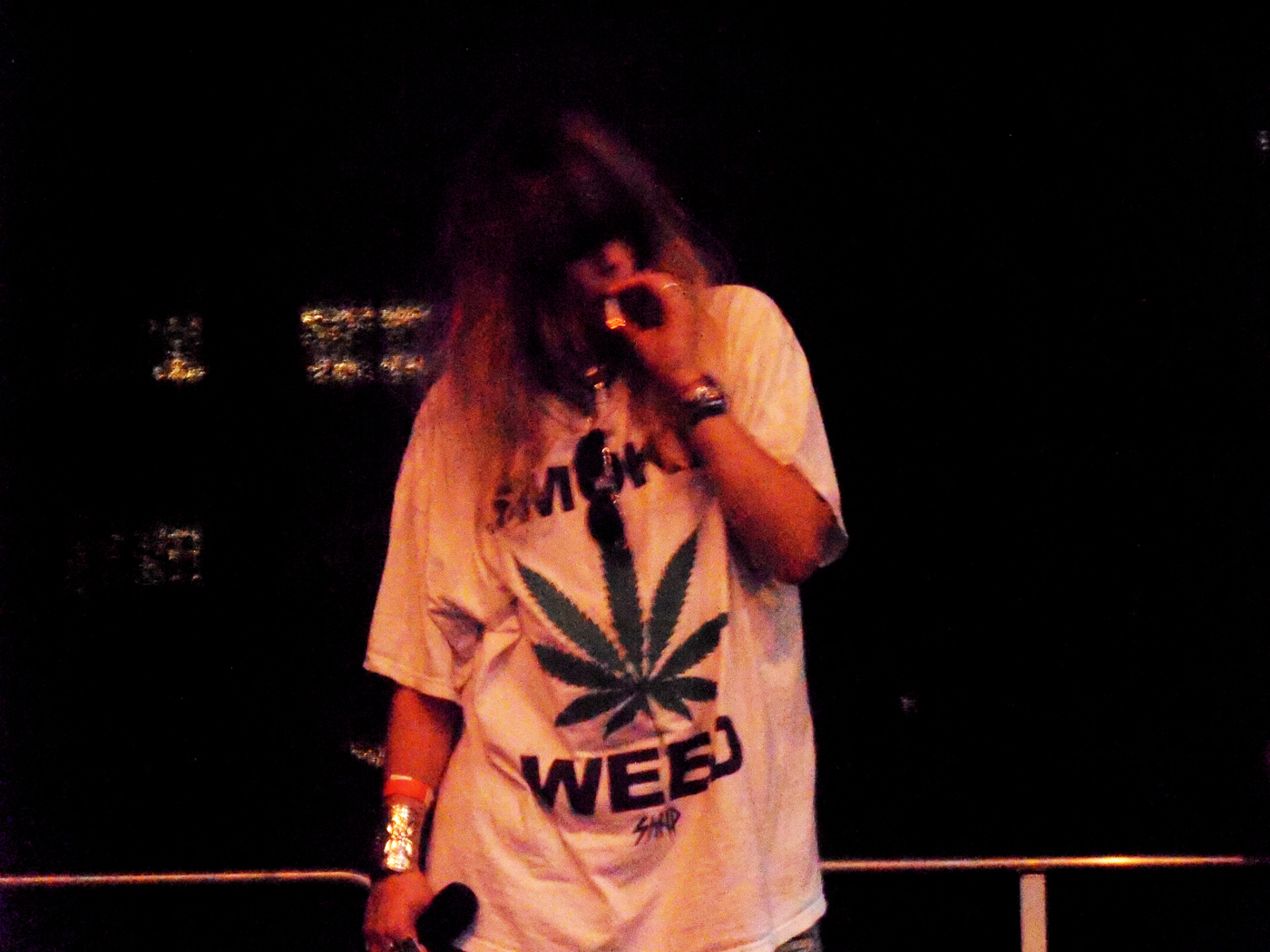 Black Bananas is the creature coming into form in the shadows of Herrema’s first glory, Royal Trux, and its rebound spawn, RTX. Herrema has been making and performing music for over twenty years. Royal Trux’s first release, a self-titled album, arrived in 1988. Together with longtime band partner, Neil Hagerty, she helped to kickstart Drag City and Domino Records in the U.S. 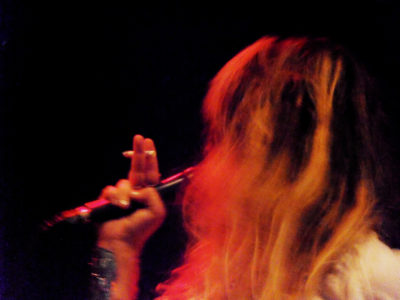 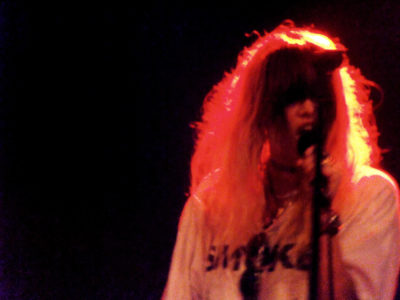 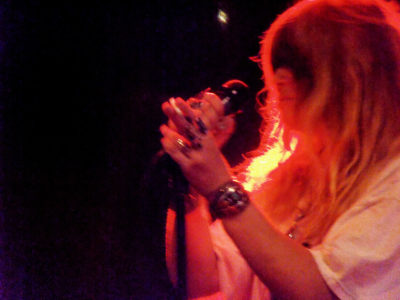 The rest of the group fills out with Kurt Midness on keyboards and samples, and Brian Mckinley on his snakeskin guitar.

The set came together loosely. Midness warmed up with a mess of loops and beats while Herrema and Mckinley took their places. Altogether the sound was too quiet, kept mostly contained on the stage, and held together by fraying blue, red and yellow wires. It sounded like it was being beamed from a rusty satellite. It worked with their offbeat slacker swagger, but would’ve been more suited in the closed, cramped corners of a dingy rock club. (But hell, free is free.) 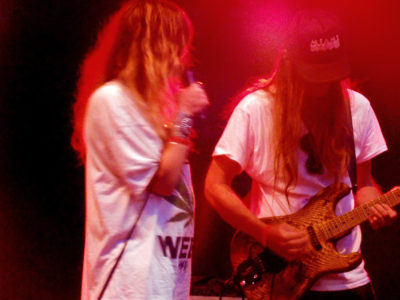 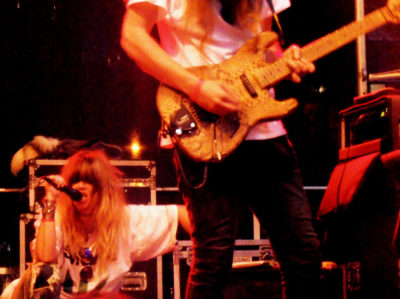 The spirit of rock & roll lifted off Herrema like smoke. When she inhaled, the scuzzy soul of Janis Joplin filled her lungs. As she played her music, she was not too interested if the crowd was responsive or not. She careened across the stage with a carelessness that was too cool for most of the child-rearing crowd.

Meanwhile, Midness stood at his station working in pre-programmed drum beats and garbled clips of undefined noise. Whenever he looked up, a widening smile of surprise developed on his face as if he couldn’t believe a crowd had formed. Mckinley, meanwhile, I don’t think once looked up. He stayed hidden behind the curtains of his long thin hair while noodling crazy psychedelic guitar over Midness’ noise.

They played cuts from their two albums, the recently released Electric Brick Wall and their first, Rad Times Xpress IV, released in 2012. Black  Bananas’ set was a showpiece of slouching rock and roll, unconcerned with theatre of any kind. When it was all over, I just shrugged my shoulders.