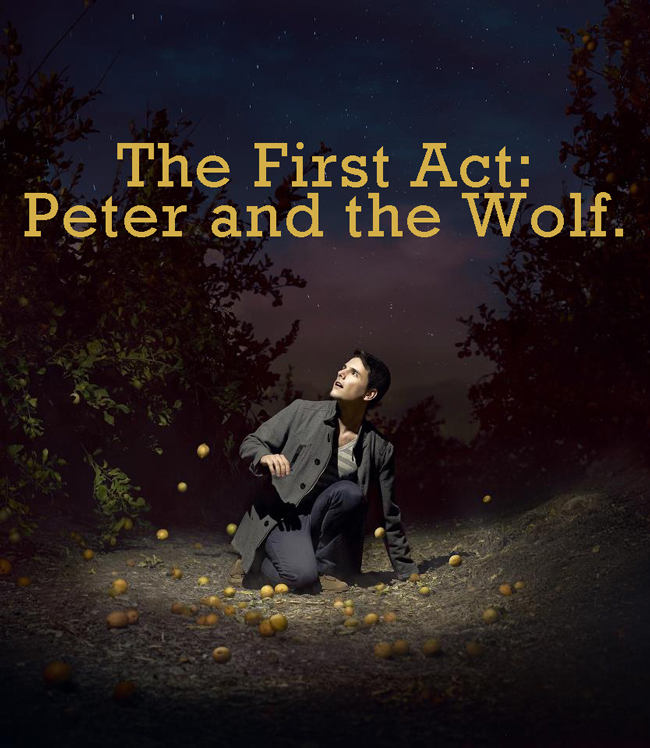 For the better part of two years I have been on a bit of a folk music binge. I usually feed my various music binges on recommendations from friends, as well as my own combing research. So when earlier this year a good friend of mine living in New York recommended a band to me, I listened. The band my friend recommended to me was Peter and the Wolf, one of the music projects of Mr. Redding Hunter. Since Redding’s music has come into my life, I have listened enthusiastically, and even religiously, everyday. I simply cannot get enough.

After joining Quiet Lunch Magazine and forming this column, I knew Peter and the Wolf must be featured. So I reached out to Redding Hunter. I told him who I was and what I wanted to do. After he wrote back, we proceeded to correspond to build the lovely interview that you will be reading today.

Redding Hunter, the author and musician behind the Peter and the Wolf act, is a lifelong musician who currently lives and works out of Austin, Texas. Listening to his music, which I will not attempt to describe in terms of genre, is a truly visceral experience. His songs do not merely convey emotion, they embody it.

While Redding plays quite a few instruments, his primary instrument, other than his voice, is the piano–and man oh man, can he play! So when he told me that his soon-to-be-released album, “Old Hotels” will be all piano, my heart jumped with excitement. His latest release, the Gender Infiniti Demo Tapes, has provided some wild and delightful sustenance to eager fans, such as myself, waiting for “Old Hotels” to be ready.

I cannot speak enough praise about this artist. Therefore, I will stop talking and let him speak to you with his music and his own words. Provided are two tracks for your listening pleasure, “The Highway” (one of my personal favorites) from Peter and the Wolf’s album, “Lightness” (previously featured as a top album on Quiet Lunch), and “Mr. Popular” from the Gender Infiniti Demo Tapes.

I strongly encourage the reader to visit his bandcamp site to stream and purchase any and all of his music. And now, it gives me the greatest pleasure to introduce you all to Mr. Redding Hunter. Enjoy.

THE MAN: The Name, The Story

Is Redding Hunter a stage name or your real name?

How long have you been playing music?

I figured out the Star Wars theme on piano at about 5 and my parents started makin me take lessons. Then I quit for a few years when I was like 13 cuz boys don’t play piano. Then I took up guitar at 16. Then I started cross-dressing so I could play piano again.

Was Peter and the Wolf your first project?

Nope. I had a pretty cool band when I was in high school with Gabe Serbian, the drummer from The Locust (one of the best bands ever.) Our band was called Rocks From Space. We just made space noises and life was fun back then, but I was too teenage-insane to really enjoy it much. But I enjoy the memories immensely, or when I read about it in my journals. I was so bummed out all the time but we were doing so much fun stuff! Being a teenager is freakin nuts.

Who else is involved in your music projects? What can you tell me about them?

I like to sing with Dana Falconberry. She sings on like all of my albums. She rules. She has a new album called “Leelanau” and it’s awesome. Lately most of my recordings are just me and her and some other friends now and then.

What instruments do you play?

Drums, piano, guitar, bass. And I’m bad at a bunch of others that I like: trumpet, igil, erhu, theremin, kazoo.

Any favorite artists or bands?

I just like music that’s good. No genre concerns really. I’ve been listening to a lot of Jay Reatard lately and early, early Metallica and Slayer, go figure.

THE WORK: The New, The Next

Your latest release is the Gender Infiniti album. It’s a bit different from your other music, but still sounds like you. Have your fans responded well to the album?

Oh that’s just some demos I didn’t know what to do with, not really an album. My next album is coming soon. It’s called “Old Hotels” and it’s all on piano. Umm yeah people seem to like those demos, though. A lot of nice people donated when they downloaded even though they didn’t have to, which really helped me out last month cuz I couldn’t make rent.

When is your new album “Old Hotels” due out?

I will post about it when it’s ready. We don’t really do “release dates” or anything, that’s kinda the way labels do business, not me. When it’s ready for people to hear, I just post it online and let it go.

Is your music a full-time job for you, or do you work otherwise as well?

Music only! But my new novel is about to come out soon, so hopefully that’ll win me some bread too.

What’s the name of your new novel?

When is it due to release? And where would one be able to buy it?

No specific date, probably next month, whenever I get the copies back from manufacturer. It will be available at reddinghunter.bigcartel.com.

THE SCENE: The Who, What, and Where

I noticed on your Facebook page that you are promoting a venue called The Owl–Austin. What can you tell me about it and your relationship to it?

Yeah, that’s my new place. I have a 2-year lease there, so we have shows and events and stuff. My buddy Matt Simon (drummer from Voxtrot / Belaire) runs his recording studio there by day. It’s called Eastern Sun Studios, come record!

I know Austin is a hub for quality music. If Austin says it’s good, then it’s good. Are you from there originally? What’s the music scene like down there from a musician’s perspective? Are you able to get steady gigs? Do you ever play outside of Austin?

I chose to move here as soon as I was done with school. So I’ve been here a lot of my adult life. It’s my favorite city. But I don’t perform much here, just like small shows for the quiet stuff. And my new band Gender Infiniti will probably start makin some noise around here this month. I used to tour all the time, like for 5 years. I’m kinda sick of it lately so I just stay put at my venue and let folks wander in when they feel like it.

In Boston, the local music scene is a point of pride for many of us. Local bands and lesser known national acts have a lot of opportunities to play steady gigs up here. There is a lot of encouragement and strong support for the local scene. Is Austin similar, different?

Austin is too big a music scene for me to make any good generalizations about it. But within the scene that I like, there’s more amazing bands than I can count. In that sense, it’s pretty BAD ASS.

As for the “bad ass” music scene in Austin… could you name a few bands from among the countless awesome ones you know? I would like to give our readers a peek into the scene down there in Austin.

**If you know a band who you think would be great for this column, then send their music to Matia Guardabascio at info@quietlunch.com.**

Written by Matia A Guardabascio.↓