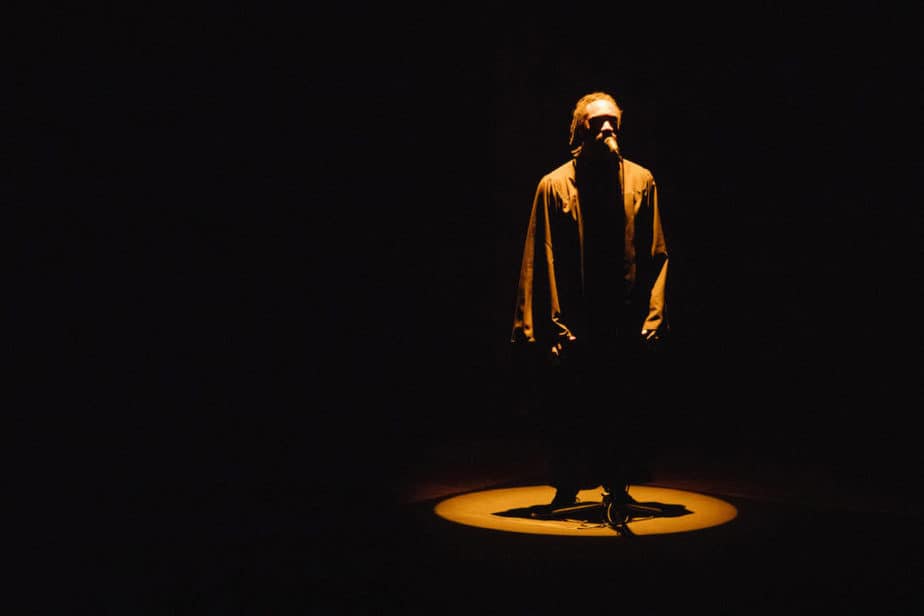 On Tuesday night, November 7th, multi-media artist Rashaad Newsome unveiled the fruits of his Artists Studio residency at The Park Avenue Armory in back to back presentations of his stripped down and yet most emotionally evocative performance series yet: Running. Taking place inside the newly restored Veterans Room, “a monument of late 19th-century decorative arts” that combines multi-ethnic architectural influences pulling from Greek, Moresque, Egyptian, Japanese and Celtic traditions, Newsome’s performance-though thematically rich with Baptist African American Gospel elements wrapped up in a clear commentary on the systemic oppression, suffocation, and elimination of black bodies (from MLK to Trayvon Martin)-Running was an appropriately nonverbal, gorgeously gut-wrenching lament for the world right now.

“Running” presumably has many, but at least two clear connotations. The first most likely applies to the jazzy, poetic, Gil Scott Heron sense of the word, that being: “Because I always feel like running/Not away, because there is no such place/Because if there was I would have found it by now/Because it’s easier to run/Easier than staying and finding out you’re the only one/Who didn’t run,” and so on. In short, “The Struggle” and the enduring hustle that comes with it. Almost billionaire rapper and mogul Jay-Z hit the nail on the head pretty recently in a similar capacity with “The Story of O.J.” 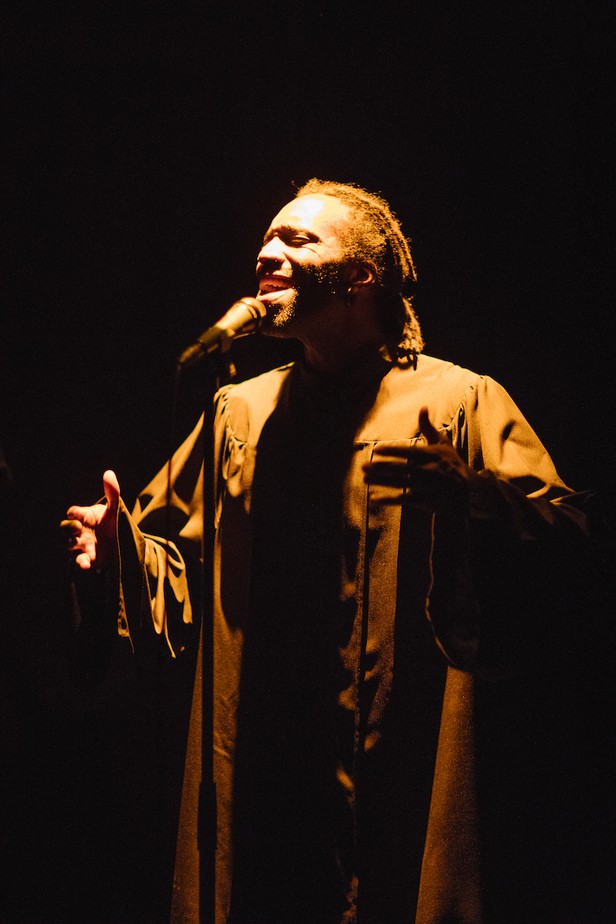 The other, more literally, applies to the musical melisma, or “vocal gymnastics” that Jennifer Hudson, Mariah Carey, Stevie Wonder, Whitney Huston, and perhaps even a young Christina Aguilera (who famously invited parody) popularized in Pop music. American Idol contestants are notorious for butchering these vocal “runs” or embellishments, often delivered in rapid-fire pivots of ascending and descending notes.

Luckily Newsome’s contacts run deep; not just through the contemporary art world (Newsome currently has a show at Chelsea’s De Buck Gallery, Reclaiming Our Time) or the BK-to-Harlem vogue ballroom scene-though he brings the two communities together more successfully than anyone on Earth-but also the world of music. Newsome has previously collaborated with Solange, A$AP Mob and A Tribe Called Quest, to name just a few. For Running, Newsome elicited the physicality, yes, but especially the impressive vocal talents of Kyron El, Aaron Marcellus and Devin Michael, who provided the triangular backbone for this minimal and yet cosmically massive experience.

Where Newsome has previously made his outward presence known in his other music and dance performances, like “Shade Compositions” or “Five,” he adopted a more Phantom of the Opera style absentee DJ approach this time around. More importantly, he shifted the context around the term “Maestro” from that of a traditional choir or orchestra conductor to that of a seasoned Shaman. Make no mistake; Running might have been the most powerful secular shamanic ceremony to inhabit the New York City contemporary art world in this writer’s modest yet considerable career. 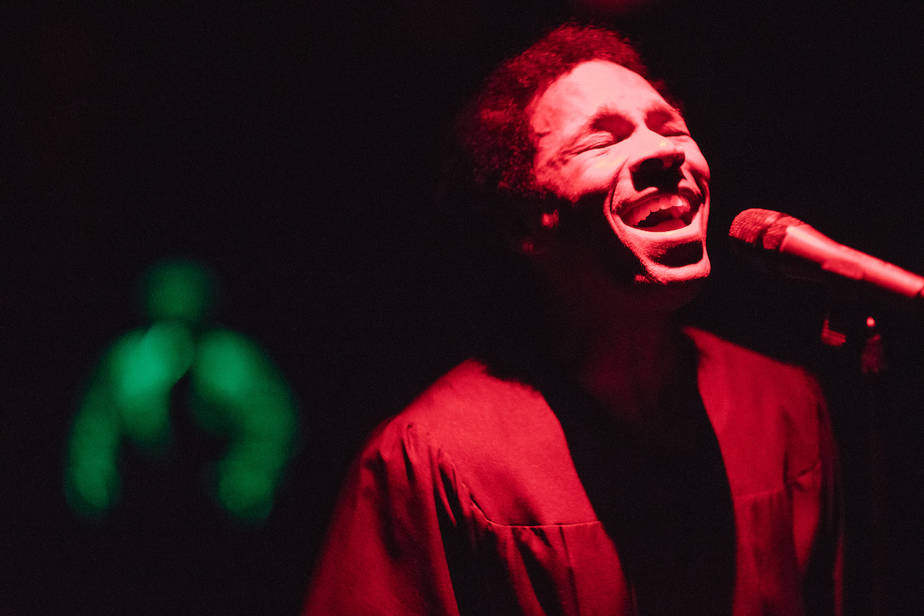 To set the stage further: audience members-after dispensing with their jackets and umbrellas on a cold, rainy, unforgiving early November night-were blindfolded and led by the hand into the Veterans Room by gracious if not somewhat militant Armory employees. This is very much in line with recent Park Avenue Armory tradition, more specifically Marina Abromovic’s insistence that the audience lock up their phones, keys and other digital ephemera before witnessing Goldberg, her subtle (also absentee) 2015 collaboration with the prodigious young international pianist Igor Levit. Where Marina demanded the audience sit for a half hour in noise-cancelling headphones to better remove the metaphorical noise of the erratic, overwhelming outside world, Newsome took away our sight and perhaps all the socio-political prejudice and general distractions that come with it. As an aside, another blindfolded audience member sitting next to me asked, “Who am I sitting next to?” It rang with the same needy, affected tone overheard at a fashion week runway show. I didn’t reply. He grumbled. Did it matter?

After 15 minutes maybe, Newsome’s recognizably velvety voice came over the PA: “Please remove your blindfolds.” We did as we were told. The room was pitch black; the collective silhouette of the audience seemed to be sitting in the round, or at least in a square looking inward from the room’s perimeter. Then, another minute or two of darkness before a beat kicked in-something new from Newsome. There was a twitchy, trap, ballroom element to the break, splashed with a strange African flute or horn maybe.

Then suddenly, a red (Magenta) light cascaded down on Devin Michael and he started to run. The light went out. The beat went on. Then a recording: a clip of the lynching of an innocent man from John Singleton’s 1997 film Rosewood. Then a yellow (Gold) light fell on Aaron Marcellus and he started to run. The beat intensified. Was that John F. Kennedy’s address on civil rights from 1963? The light went out. A green (Aquatic/Forrest) light fell on the formidable Kyron El, who ran and ran hard. Very much in uniform with the aforementioned singers, El wore a non-descript black choir gown.

To be clear, each singer’s voice was as uniquely flavorful as the light that fell upon them-green, yellow, red-all colors that identify rather deliberately with African and Caribbean flags. That being said, Kyron El’s range spanned at least three octaves and would consistently send chills throughout my body. Was that Walter Cronkite’s report on MLK’s assassination breaking through? More running. I was becoming transfixed by the vocalists’ fluid hand gestures, spiritually tethered to their voice like marionette strings.

The beat was becoming hypnotically entrancing at this point. I found myself nodding and swaying like an orthodox Jew in Temple: “All of my limbs shall proclaim: Who is like You…” When we praise G-d, we do so with all of our being: the mind, heart, and mouth express the prayer through speech, and the rest of the body does so by moving. Every fiber of our self is involved in connecting to our Creator.” King David (Psalms 35:10).

“This beat is lit as hell,” I remember a far away voice saying as I shook like a puppet. Newsome had me. I had let go of my critical neo-cortex and let the hippocampus take over. Soon, all rational thought was giving way to something pure, raw, and emotional. All my junk was bubbling out of me, like next-day teenage vodka sweat. Was that Malcolm X dropping knowledge at his own expense? The beat turned up and flowed into MLK’s last, fateful speech on April 3rd, 1968. What was this thing? Is that L.B.J.? The beat turned up. More running, running, running… 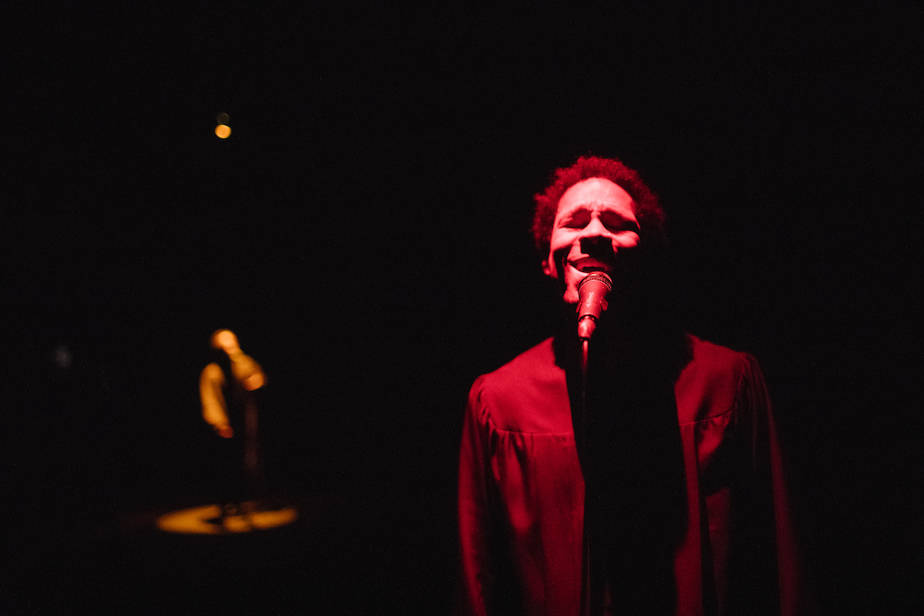 Why was I becoming so emotional? Why did I feel like I was (flash) back in the pitch-black ceremonial maloca in the heart of the Amazon, while Grandmother flowed through my veins along with the Icaros of my fellow international and Peruvian hyperspace travelers? These “runs” were Icaros for a concrete jungle, for an irrational, inexplicable civilization that now shrugs off weekly, now almost daily senseless shootings and other insults to humanity. 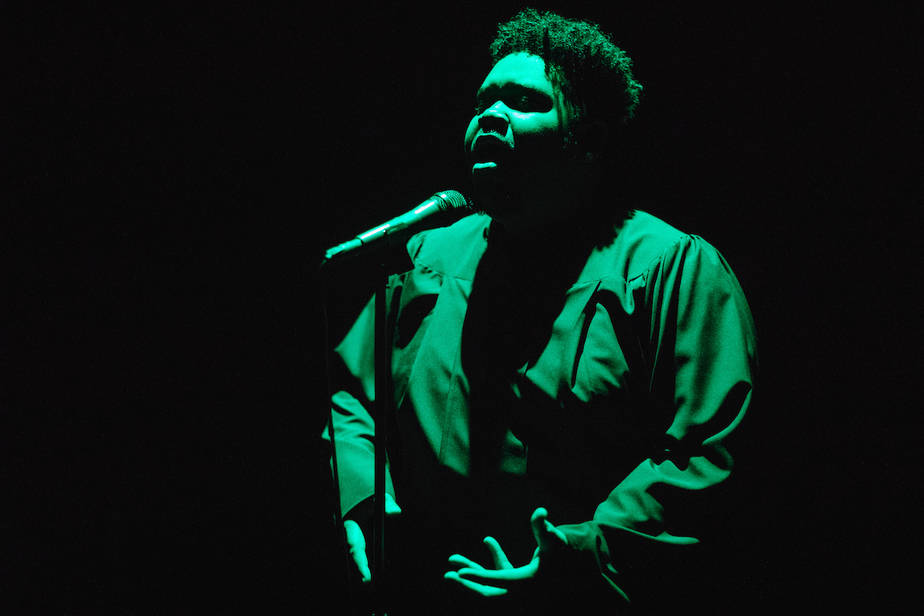 Were those Fred Hampton’s revolutionary words in my veins too? Why am I sobbing like a damn baby? I’m a grown ass man! Good thing I didn’t tell my nosy neighbor who I was. Devin Marcellus was back, bathed in gold and raging like the ghost of Marvin Gaye singing a eulogy to B.B. King and Philando Castile. Devin Michael was screaming Black Lives Matter; not with words, mind you, but with streaming, scat-jazzy intonations as if he were the love child of Aretha Franklin and James Brown. Was that George Zimmerman’s sociopathic, bullshit phone call to Florida police? Is that the NYPD aggressively, no, needlessly harassing Eric Garner? Yes and for what? What is wrong with people? Why can’t we do better? Why don’t people get it? What kind of flute is that? G-d damn, Kyron El is killing me, killing me, killing me… 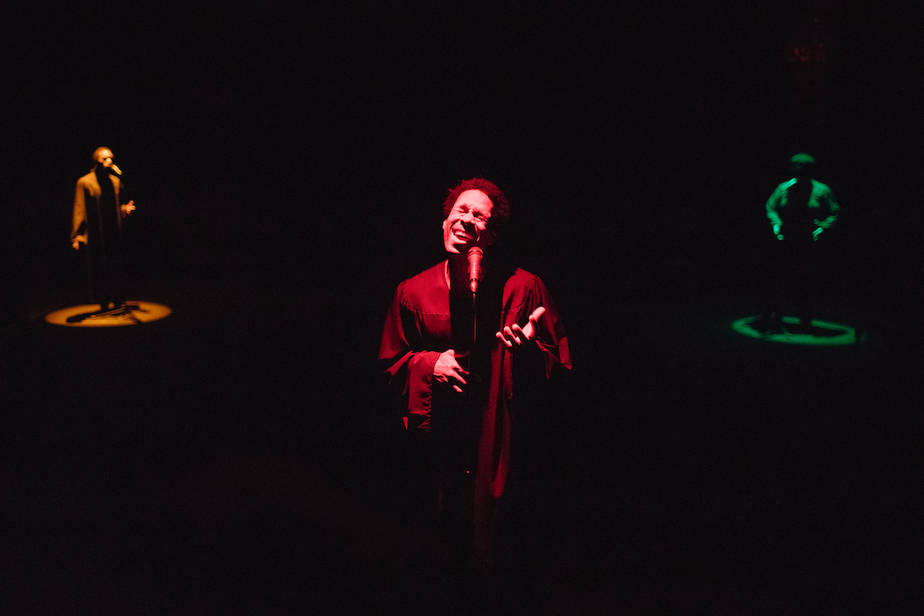 Inevitably, the singers’ voices merged with the chaos and cacophony of the LA riots. The lights flickered simultaneously as the beat came to a crescendo. The green, gold, and red were mixing into a rich, painterly brown. The intercut audio recordings crashed with Newsome’s score, a river of static and emotional turmoil, ever-flowing in a violent, hyper-loop fever pitch. The lights came back up. How much time had gone by? Rashaad emerged, no, manifested. The audience cheered. Many stood and applauded; perhaps others didn’t have the strength to rise. I wiped away the tears and quietly but shamelessly blew my nose into my blindfold (sorry random, unlucky 9pm audience member).

As the audience trickled out in the warm, dim light, I collected myself and “sat with it” in a post-meditative trance, as Newsome had recommended I do throughout my waking life roughly a year earlier in St. Croix. I stared at the newly revealed Celtic gold leaf detailing on the century-plus old ceiling, which made the Veterans Room look like some ancient Viking Meade Hall. Though Running was certainly a detailed exploration of the troublesome experience of black souls in America, this performance was truly universal, timely, simply genius/ingeniously simple; Newsome’s most worldly, globally inclusive, accessible piece to date. It was heavy as hell, but you were ever in the hands of a master artist, a worthy, seasoned Shaman. That beat, that unidentifiable flute, Bobby Kennedy, Malcolm X and their even more glaring absence, they all lingered in my subconscious, though the PA had long been turned off. They’re still there. Still here.

As the militant, shuffling, type-A Armory employees crept up to kick my loitering ass out, Gil Scott’s decidedly immortal words came back to me: “Because running will be the way your life and mine/Will be described/As in “the long run”/Or as in having given someone a “run for his money”/Or as in “running out of time”/Because running makes me look like everyone else/Though I hope there will never be cause for that/Because I will be running in the other direction/Not running for cover/Because if I knew where cover was/I would stay there and never have to run for it/Not running for my life/Because I have to be running for something of more value/To be running and not in fear/Because the thing I fear cannot be escaped/Eluded, avoided, hidden from, protected from, gotten away from/Not without showing the fear as I see it now/Because closer, clearer, no sir, nearer/Because of you and because of that nice/That you quietly, quickly be causing/And because you’re going to see me run soon/And because you’re going to know why I’m running then/You’ll know then/Because I’m not going to tell you now.” 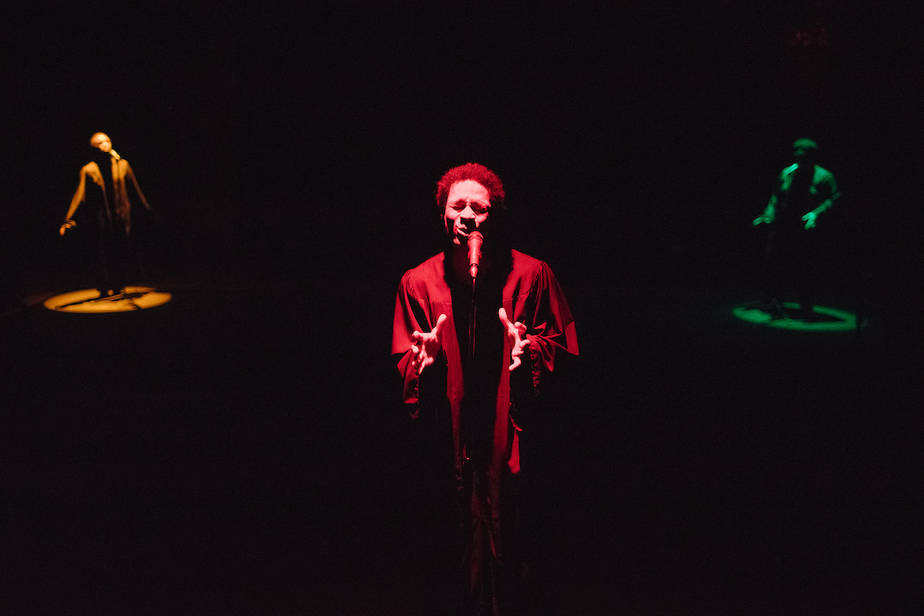