For someone who has lived in New England her entire life, I find it surprisingly easy to connect with the lyrics of Surfer Blood‘s first album Astro Coast (“If you’re movin’ out to the west/Then you’d better learn how to surf” and “Swim to reach the end,” to name a few), a reaction that is well-described by the German phrase Sehnsucht. The term refers to a specific type of nostalgia or longing specifically for something that one has never experienced; a desire for a far-off land or ideal experience. The Beach Boys built an entire empire on this feeling, and others have since tried their own version of replicating the care-free feeling of a beach town. While Surfer Blood’s sophomore album Pythons has no trace of surf-related experience in their lyrics, the aesthetic of the music feels as sepia-washed as family photos that are old enough that all one can remember are the happy times. 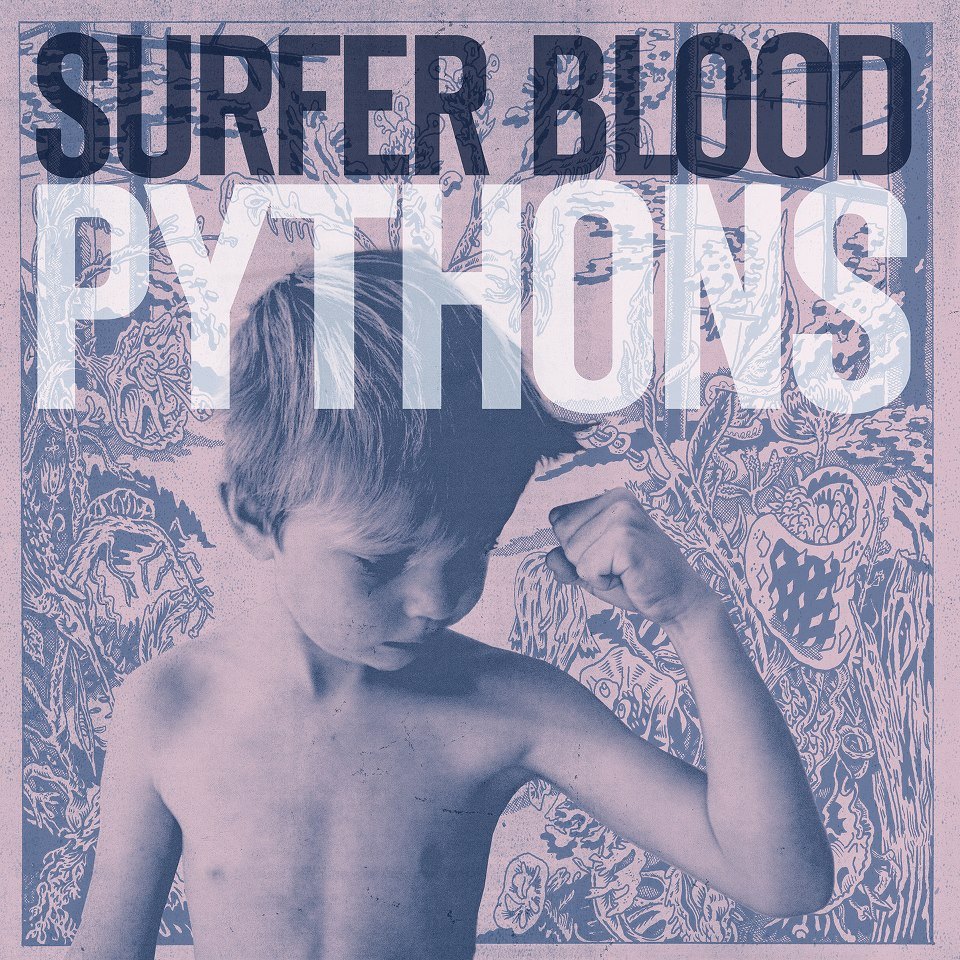 It’s hard to not compare Surfer Blood to giants of the 90’s. The chords and melodies are Weezer-reminiscent, and his voice has qualities that earn him comparison to Michael Stipe of R.E.M. Unlike modern bands of a similar genre (I’m thinking Real Estate and Best Coast), lead singer John Paul Pitts evokes more emotion with his voice than the aforementioned, and because of that, feels more tied to reality and less vacuous. On the opening track “Demon Dance,” Pitts screams the bridge in a hoarse voice, “Apologies, meet apologies/We could demon dance all night,” while the backup vocals sing hushed pop “oohs.” The juxtaposition between the simple surf-rock chords and the ebb and flow in vocal intensity give the song a strong emotional impact on the listener and assure us it’s not a sterilized version of the truth.

“Weird Shapes” has moments where the guitar melodies sound like The Strokes. The bright and repetitive piano mix with the garage feel of the guitar to give the track nice layers, and the outro is filled with more surfy “oohs” that are, for some unknown reason, near impossible to tire of. “Squeezing Blood” is also worth mentioning here, because it’s simple yet entirely satisfying.

Though one of the slower and less-memorable tracks on the album, “Needles and Pins” is interesting for it’s 6/8 time signature, which gives it the waltz feel of a beachy lullaby. Another 6/8 track follows, aptly named “Slow Six.” It’s one of the longer and more complex tracks on the album, taking the listener through entirely different soundscapes. They establish a heaviness anchored by the drums that acts as capriciously as a summer storm–one moment it swells and fills the room, and the next you find yourself in the eye of the storm, with nothing but innocent off-kilter guitar melodies and blue skies. If I may make one more comparison, some of it’s best moments sound like Built to Spill.

Surfer Blood may well be working in the same vein as Instagram, allowing us false sentimentality without experiencing the passing of time; it’s a 2013 album that feels like Weezer circa the Blue Album (“Surf Wax America” anyone?). That being said, the Blue Album was good, and we liked it. So what’s to stop us from liking Pythons? Only our judgment that something has to earn it’s cultural capital by standing the test of time. The album sounds nice, and if you’re like me and there are no surf boards in sight, find a back porch with an Adirondack chair and let this album make you feel good. It’s an escape, and just in time for summer.