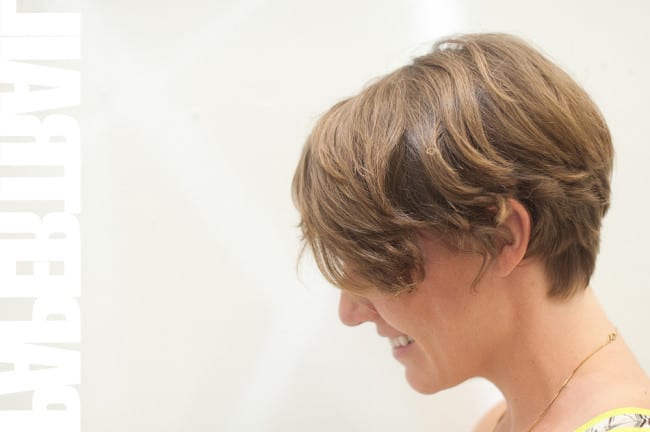 A Brooklynite by way of Minneapolis, Minnesota, Jean Seestadt’s approach to life seems very similar to her approach to her work. Working like a surgeon with a scalpel, Seestadt’s mood is devil-may-care but her precision is clean, sharp, and–upon even closer inspection–as accurately executed as one can do.

After a digital dinner date, Seestadt invited us into her studio space at Hunter College’s MFA building in Hell’s Kitchen, Manhattan, where she is due to complete her second year of the MFA program this month. Her style is as art school cool as you can get; in a pair of deep indigo skinnys and an oh-so-appropriate printed tank, Jean’s body language was deceptively nonchalant but her eyes were as cheerful as the blue sky.

Where you from, homes?

“I grew up in Minneapolis, MN and received my BFA from the School of the Art Institute of Chicago in 2007. I now live in Brooklyn and am currently in my second year of Hunter’s MFA program.”

“I used to paint but I realized I was no longer interested in work in a 2D format. I wanted to create an experience for the viewer. I am interested in pushing the fragile tradition of paper cutting into a public context. The environment or viewer will eventually break down each piece and turn the artwork into litter. In my newer work I am interested in using the fragility of cut paper to build small systems upon such as a cloud or wall that protects a flower. Paper’s fragility will eventually break down both the created object and the flowers the objects are created to protect.” 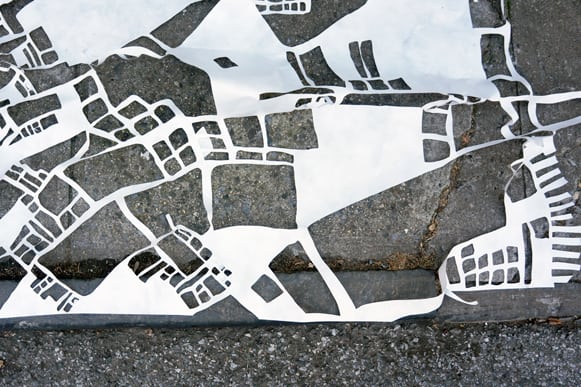 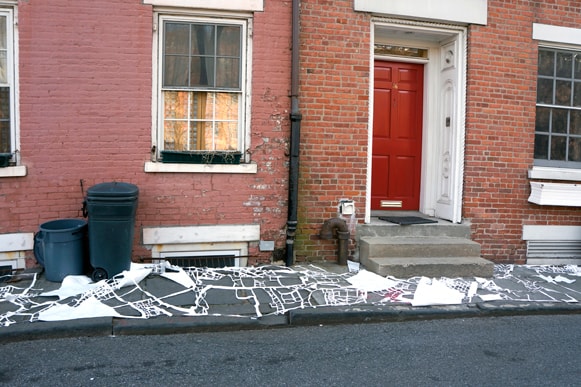 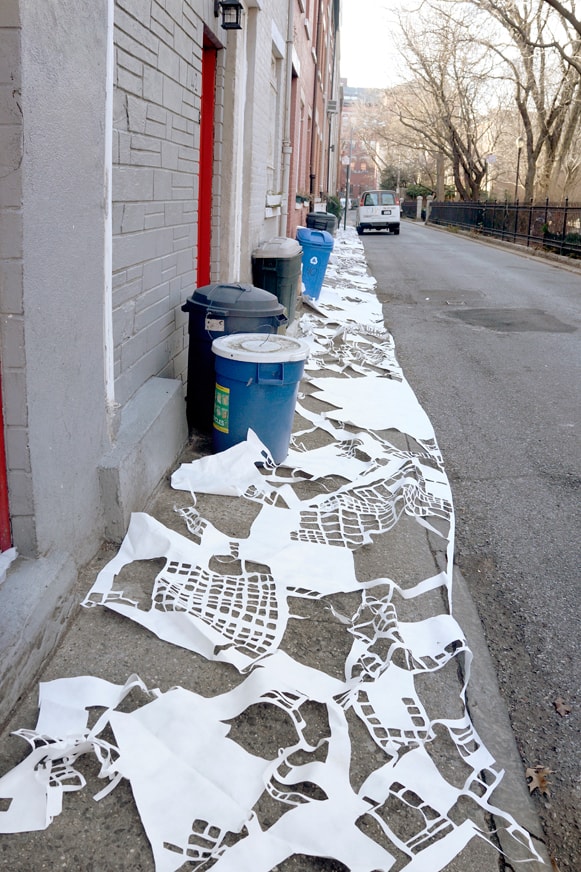 Most artists want their work to last forever in the annals of time — not Jean. We often hear the phrase “create something that is timeless” but Jean’s focus seems to be the complete opposite. Her work prides itself on being completely vulnerable to elements. Whether it is Mother Nature or modern man, her pieces are often left to the weather, and the public, to do with it as it pleases. 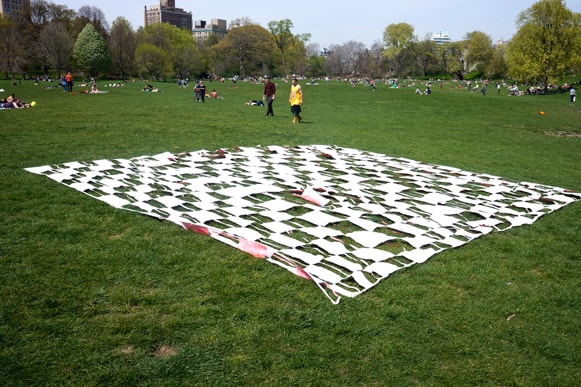 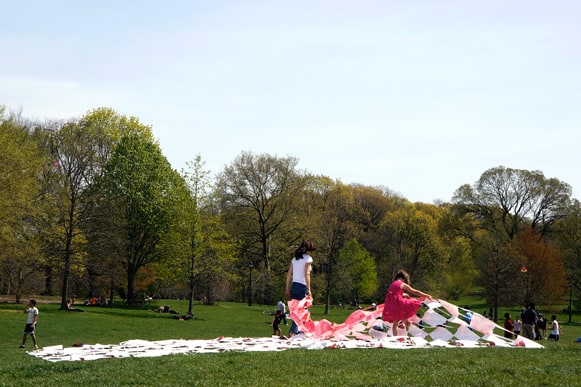 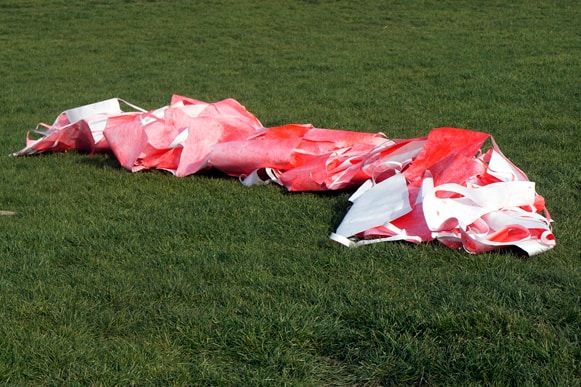 We’re not going to fib, this concept baffled us somewhat. We couldn’t fully wrap our heads around Jean leaving her beautifully intricate pieces out in the open. From If You See Something, Say Something to Faucets Around the City, Jean looks as if she’s just throwing her art away.

But after speaking with her, we began to understand her dynamic. Her simultaneous attachment and detachment from her work is a delightful contradiction; a relationship where two opposites play off of one another for a greater good. 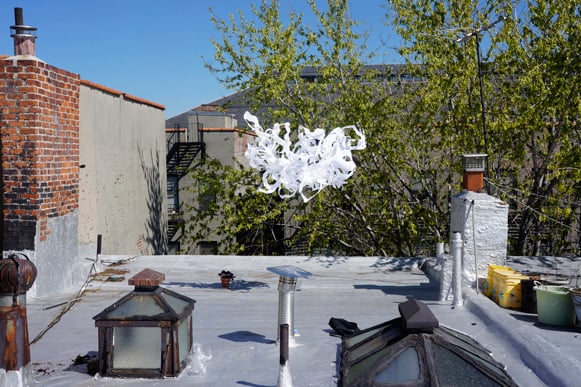 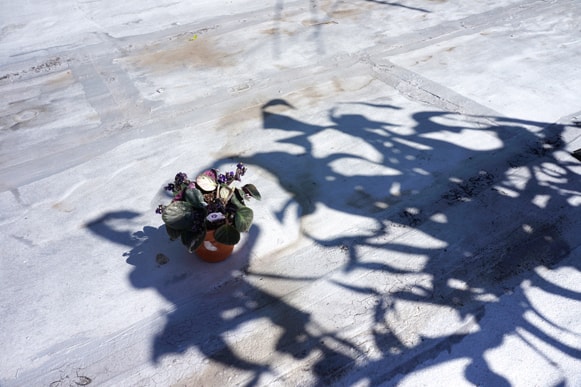 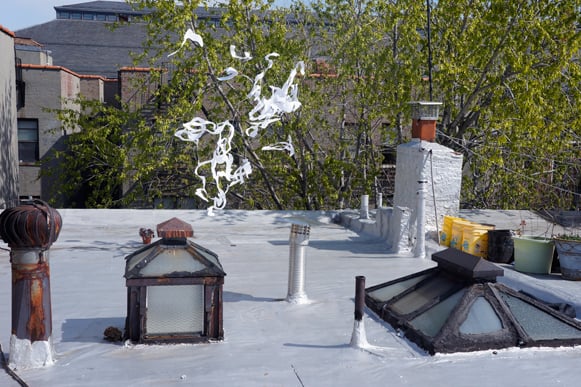 How long does it take to complete a piece?

“Honestly? I’m not sure. I don’t really measure or keep a sense of time when I’m working; I just go. But if I had to ball park it I would say maybe an average of three weeks. Sometimes longer, but, again, I wouldn’t know! [Laughs.]”

How do you select where to install your pieces?

“Picking the location is a mix of practical and conceptual decisions. For each work there are million of examples of compromises that need to be made to figure out where the installation should be. Also, different locations bring different viewers which can completely change the artwork. I’ve learned so much about the personality of different neighborhoods from how people respond to the artwork.”

What would you like your audience to take away from your work?

“I am not sure what I want to the viewer to take away. I think of my work as hopeful and ridiculous. I create walls and clouds that I know will fail, but maybe they wont. I spend hours meticulously cutting paper and leaving it on the street for people to destroy. In some ways it is really idiotic. Each time I hope it will somehow last, or something amazing will happen but ultimately they all end up in the garbage. Hopefully, the people who see it will participate in that for the small time each work survives.” 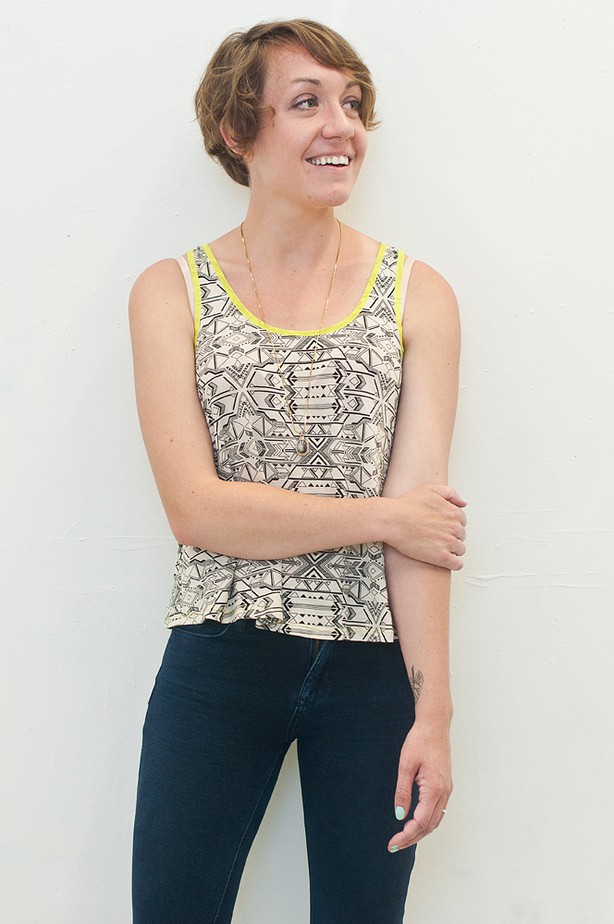 What’s next for Jean Seestadt?

“This summer I want to concentrate on making a few larger scale pieces and bringing them around the country and seeing how their reception is different in places outside of New York. I am interested to see how overly polite people in Minneapolis treat the work compared a college down in the Northeast.”

As you can see, Jean is fully aware of her work’s vulnerability and is crafty and astute enough to transform it into a strength. In essence, her pieces embody a theory of life; one must hope for the best and be willing to accept the worse.

Nonetheless, if you see Jean’s work out there, do us all a favor and make it last.