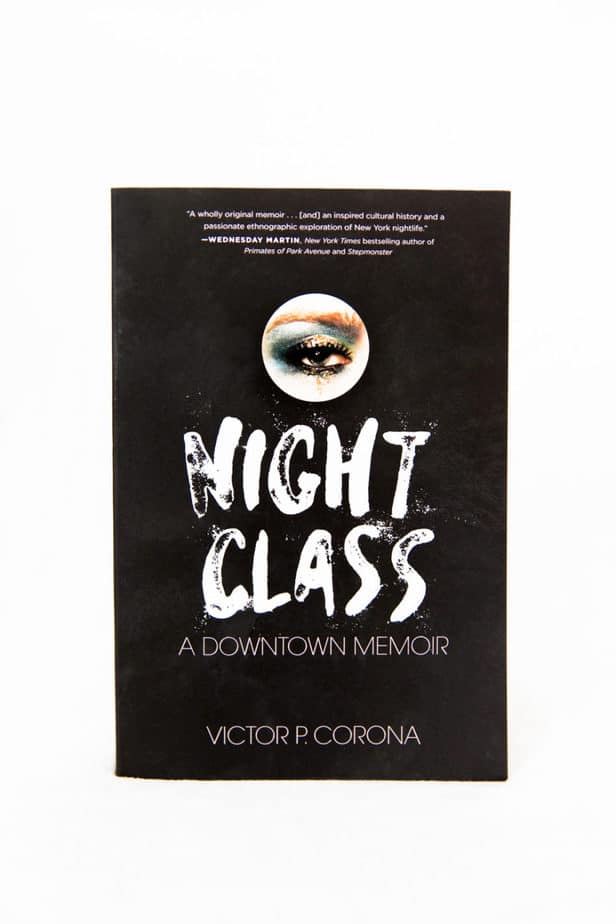 “Being a sociologist means being a professional voyeur, a professional people watcher,” Victor Corona told my fellow young, naïve know-it-alls assembled in our “Sexuality and Society” class at Columbia University. It’s there where we spent time thinking deeply about the identities we construct and the ways in which we police and perform those identities through the stories we tell ourselves and others. During my time at Columbia, Victor Corona was one of my favorite professors due to his ability to translate dense social theory into something more usable, the occasional sassy yet scintillating retort, and his willingness to bring lessons beyond books into the classroom. I had the chance to catch up with him recently to discuss the state of nightlife and his new book, Night Class: A Downtown Memoir, coming out on July 11th.

The memoir describes his encounters with Lady Gaga’s old Lower East Side tribe, outrageous headliners at downtown hotspot The Box, Limelight club kids and Warhol Superstars, and even working as an assistant to Club Kid Killer Michael Alig. The book’s backdrop is his trek from Mexican immigrant to studying sociology at Yale and Columbia and researching the U.S. Army to now teaching at NYU.

Peter J. Bruno | Before diving into New York nightlife, what were some of your prejudgments about the club scene? Did your experiences align with or defy your expectations?

Victor P. Corona | I initially thought of nightlife as a very snobbish, elitist world filled with rich, pretty, white people. And I was right! But there’s so much more to it as well. I met some amazingly talented and friendly people and have been to some really magical spaces. Sometimes it all makes you feel like you’ve been plopped into some epic New York movie.

You just never know what might happen when you’re out. I met my best friend Talal at Susanne Bartsch’s On Top party at The Standard. Other beloved nightlife artists like Muffinhead or Gage of the Boone I didn’t really get a chance to know in nightlife so I just invited them to my sociology class and got to hear about the amazing work they do. And then it has been really fun to see ex-students experience places like The Box or On Top. My former Barnard student Alexandra Warrick has become a dear friend and collaborator and she’s now at the center of this nexus of uptown and downtown It Kids. 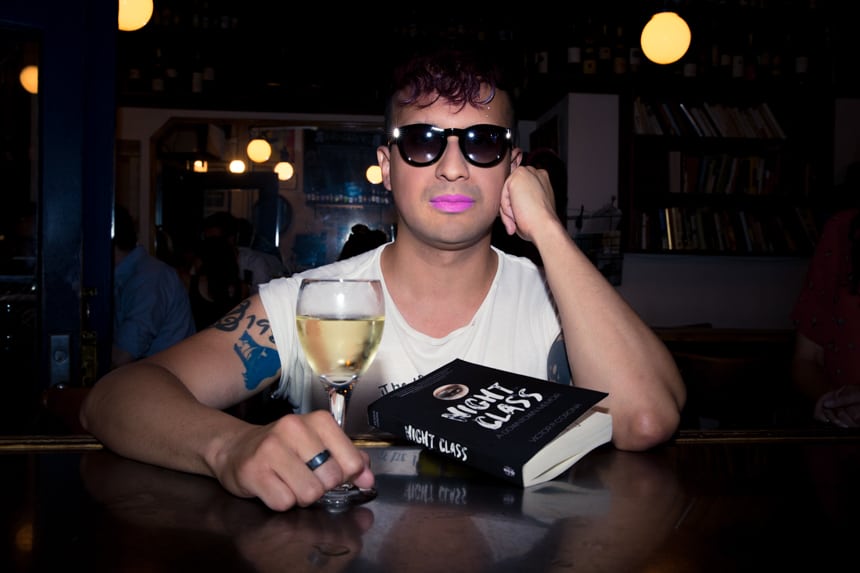 PJB | What do you think are some of the most beautiful aspects of nightlife? The ugliest? How do you see social hierarchies from the outside world functioning within nightlife?

VPC | Like I said, wealth and beauty are the norms. And a lot of gay nightlife is oriented to white twinks and muscle queens. If you’re a person of color without model looks—like me—it can be very alienating and off-putting. But what kept me going back to those parties is remembering that I was there for the story, to understand what that part of New York was all about. Honestly, though, I prefer mixed parties: different races, classes, gender expressions, and sexualities colliding, dancing, flirting. It is SO boring to hang out with the same homogeneous group of people who talk about the same things over and over.

I also learned that if you’re willing to work a look, to be really creative and push the boundaries of your own identity, even shady people will recognize your effort after a while. It’s a lesson in stamina. There are also some people who will actually welcome you. One dear friend is the popular party promoter Suzie Hart, who was genuinely friendly with me from the start and has also been a wonderful panelist in my classes. We now hang out outside of nightlife and talk about everything from grad school to the music we grew up with or our TV obsessions like Handmaid’s Tale and House of Cards. Friendships like those are the most beautiful part.

PJB | How do you think that technologies have influenced the ways in which nightlife operates?

VPC | I did a fun interview with Sara Radin from trend forecaster WGSN and she knew about way more apps and technologies that I had heard of. Frankly, I was horrified. Nightlife is all about the lived experience: your heart pumping and your mind racing to absorb everything that’s happening. Peter, you’re a musician, so maybe you’ll sympathize! Venues are still grappling with what to do about too much damn selfie taking. As I say in the book, if the venue allows it, take a selfie with your friends when you arrive. Take it early in the night when you look flawless. But then, for heaven’s sake, put your phone away! This is why I love a place like The Box. It takes theatricality and spectacle to new heights. Watching Rose Wood dressed as Anna Wintour shit on stage and then ram a few pages of Vogue up her anus with a plunger, for example. And then the beautiful DeeDee Luxe dressed as a robotic astrowonder woman riding a gyrating robotic white horse. I’m glad that they don’t allow photography. It lets you just feel the sensations that the performers are trying to transmit. 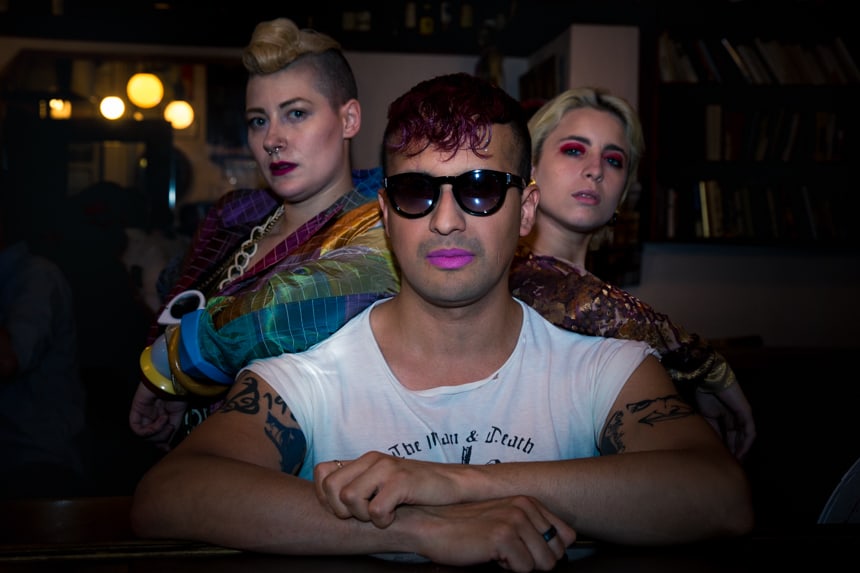 VPC | Great question—that’s exactly where I start the book! And yes, there was a huge learning curve. At the start some people were very mean. But their coldness can also push you to make more of an effort. Dress up, be bold, wear something outrageous and chic. Add energy to a party. Are you sitting there sulking or tapping away on your phone? Or are you at least making an effort to talk, dance, laugh, and add value? Not everyone’s a social butterfly—I’m not—but it’s about the effort and energy you bring.

PJB | How did your academic colleagues react to your nightlife work?

VPC | They were surprised because they only knew Victor the grad student and military researcher: shaved head, glasses, and bony, who moved to Washington DC for a year. A French colleague even called me “Captain America”! And then two years later I come back with dyed hair, all black clothes, and less skinny. They were like, “Um, Vic? What’s going on?” But with a few exceptions, they have been open and supportive. My dissertation adviser David right away started thinking about the phenomenology of an encounter with Lady Gaga! But in general, it’s just unfortunate that sociology departments like Columbia’s have become so focused on public policy as a way to stay relevant. They ignore culture, the things that consume so many young people’s lives.

PJB | Did your previous research on the Army inform your research in any way? What can people learn about culture and identity through Night Class?

VPC | Wherever you go, people want an identity. Some may wear combat uniforms, others might wear tweedy professor garb, and others may wear neon club kid looks. But all people are reaching for an identity. Night Class is about fame, spectacle, and delusion among certain downtown tribes, but the stories are relevant to everyone.

There are others who have tried to understand the rules of the game for a certain sliver of New York, like Wednesday Martin’s bestselling Primates of Park Avenue. Wednesday is also now a dear friend and mentor and has been a guest lecturer at my classes at NYU and Columbia and the students always feel so inspired by her. To do a reading at an elegant and famous bookstore like Rizzoli on July 13th  with a brilliant and pioneering thinker like Wednesday is beyond an honor. And it’ll be fun. Come!

PJB | What was the most surreal moment for you in the process of writing this book?

VPC | The moment that comes to mind was back in January. I had submitted the first book draft but at least three more rounds of revision with my great editor Mensah Demary would follow. While visiting my brother Joel in Los Angeles, I was walking through the Grammy Museum, gawking at Michael Jackson’s red Thriller jacket and other pop relics. As I went down a staircase, a friend texted me to say that he had just preordered my book. I sat down and thought, “Wait. WHAT?” I didn’t know that it had been posted on Amazon already! It was surreal and a little startling because I realized that it would be an actual thing on a website that people could buy, hold, and read, not just ideas in my head or files on my computer. The book didn’t belong to me anymore. 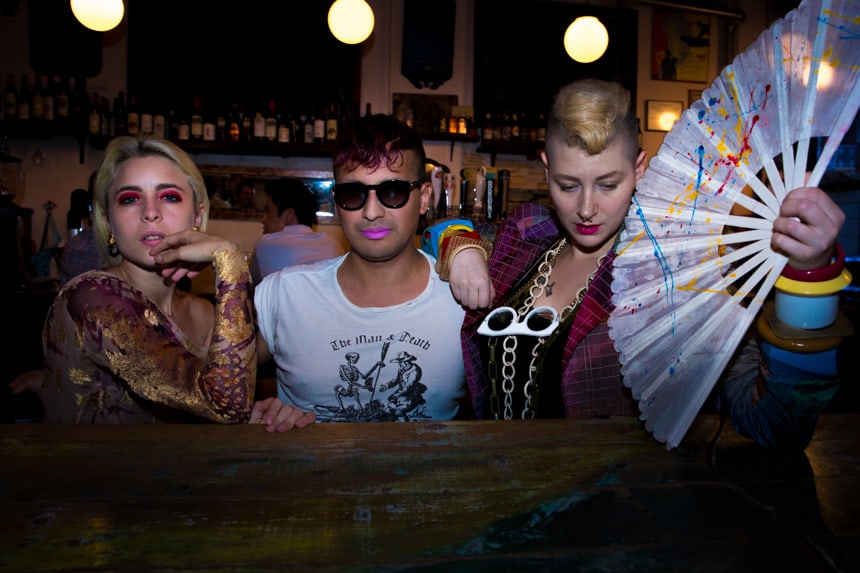 PJB | How have you changed throughout the course of writing Night Class? How different are Professor Corona and Vic?

VPC | Professor Corona and Vic have to be two different people. As a professor I want my classrooms to be lively and open, but they also need to be safe spaces where certain rules are followed. Although I do remember, Peter, that I was a little tough on you during your mid-term presentation! But I also knew that you could take it and that you’re a sharp, incisive thinker. But in general the professor has to hold back and maintain a sense of intellectual decorum and rigor.

Vic, I think, is more fun, unedited, and loud, especially after a few glasses of white wine with Suzie and Alexandra at VBar on Sullivan Street after class. But Vic is also more of a stress case and a worrier, whereas Professor Corona can just lose himself in the course material, lectures, images, and class discussions, the ideas that made him fall in love with sociology years ago in college. But then class ends and he has to go back to Vic’s worries and beefs, and then get ready for a night out.

Get Your Copy Today!

Peter is the singer for I Can Dream and a student at The Graduate Center at CUNY.