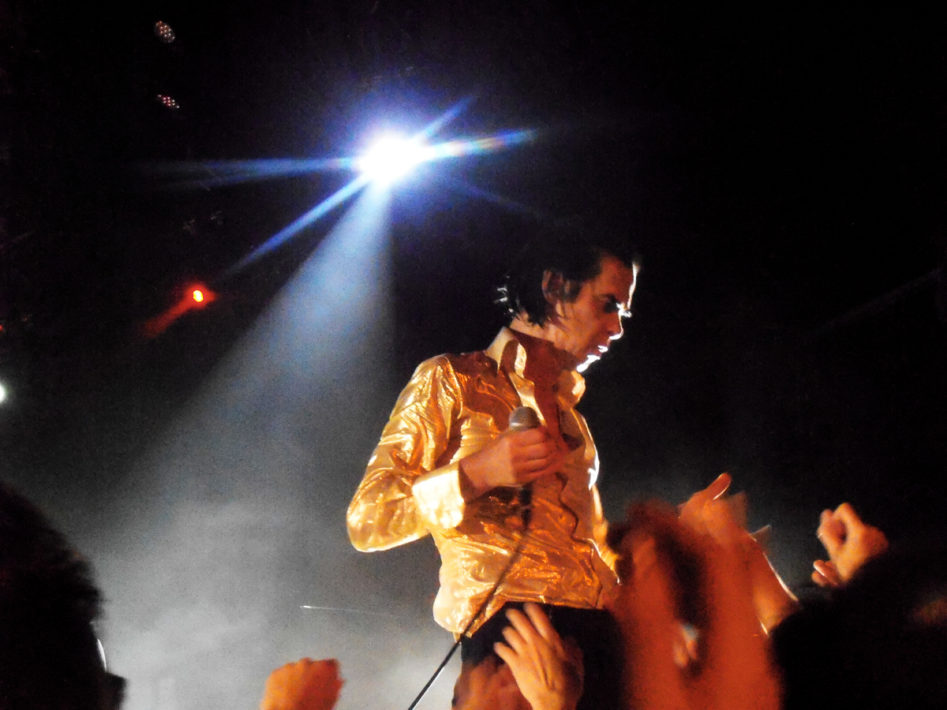 “Some people say it’s just rock and roll / Ah, but it gets ya right down in your soul”

He’s that bad motherfucker called Nick Cave and last Saturday night he and his renegades in The Bad Seeds played Prospect Park in Brooklyn, potentially waking up God from a deep, deep sleep.

They kept the crowd in hysterics all night with a career-spanning set. By all accounts it was a perfect performance from one of the most gripping musical acts around.

The Bad Seeds took the stage to the cunning, rumbling bass loop that starts “We Real Cool” off their newest album, the magnificent Push The Sky Away. The lights were dark, except for a line of downcast blues at the back. 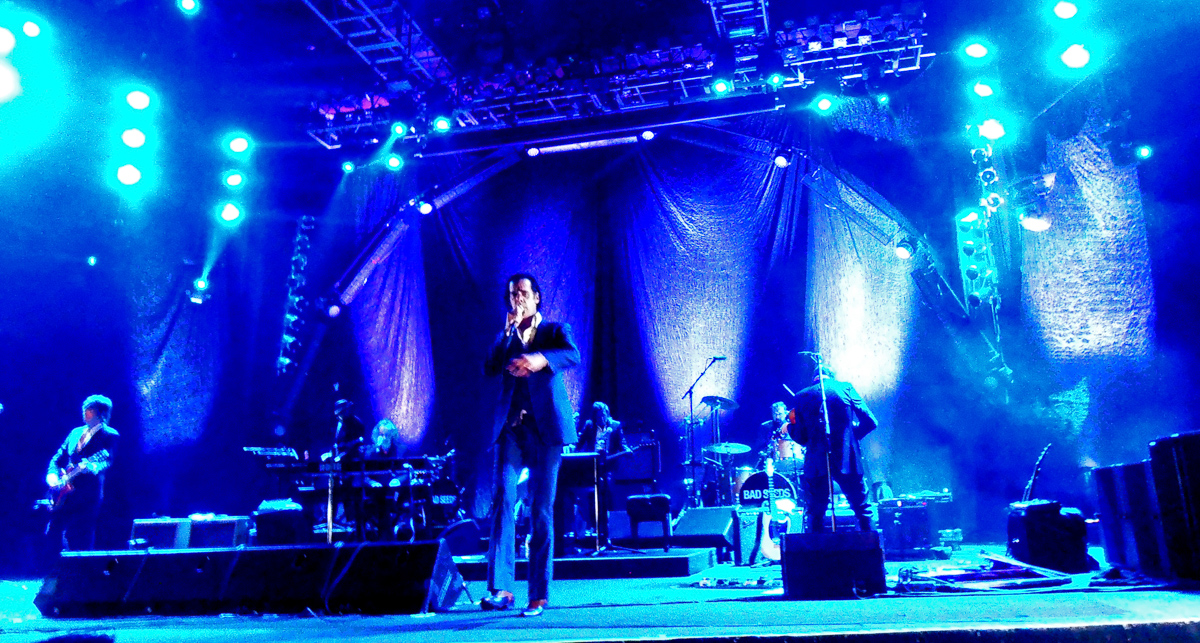 As always, when the impeccably dressed Nick Cave enters the picture, the first, most recognizable thing you notice are his eyebrows. Like his hair, slicked back, and his finely pressed suit, they are jet black and frame his leering, distrustful eyes. They seem to move out ahead of the rest of his body.

Cave, the man, stood at the edge of the stage, lit-up in dark cobalt blue light. His eyebrows flipped inward like they were trying to touch as he began, “Who took your measurements from your toes to the top of your head? Yeah, you know.”

They kept to the new album and played “Jubilee Street” with perfect transcendental precision. The strings grew manic while Cave slithered in one spot, reaching lyrical climax. “I am alone now / I am beyond recrimination…,” he sang as the song shot out over Prospect Park and lingered into the Brooklyn air. “I’m transforming / I’m vibrating / I’m glowing / I’m flying / Look at me know!”

Only two songs in and the jubilation was already sky-high. Saturday’s show came at the tail end of the Australian group’s second tour of the States for their fifteenth album, Push the Sky Away, released last year. The show was one of the slotted benefit events for Celebrate Brooklyn.

Nicole Atkins started the night off with songs off her new album, Slow Phaser. Following her was Devendra Banhart who gave a shambolic performance with strands of songs from all over his discography. The stage may as well have been a living room as he lazily teased out versions of “Body Breaks,” “Golden Girls,” “Little Yellow Spider” and others. Nobody was trying to hide it. Everyone was present for Nick Cave & The Bad Seeds and even the openers sensed it.

Cave spent most of the show gliding from one side of the stage to the other, engaging heroically with the crowd. As the roaming “Higgs Boson Blues” concluded, Cave was nearly lying on top of the audience. “Miley Cyrus floats in a swimming pool in Toluca Lake,” he sang between heaves as the song died, “and you’re the best girl I ever had.”

Every sinewy step he took radiated with energy. The man moves with alarm, like a wiley Dick Tracy villain in an expensive suit. He’s one of the greatest frontmen the world has seen and The Bad Seeds expertly back up his every physical and lyrical outburst. 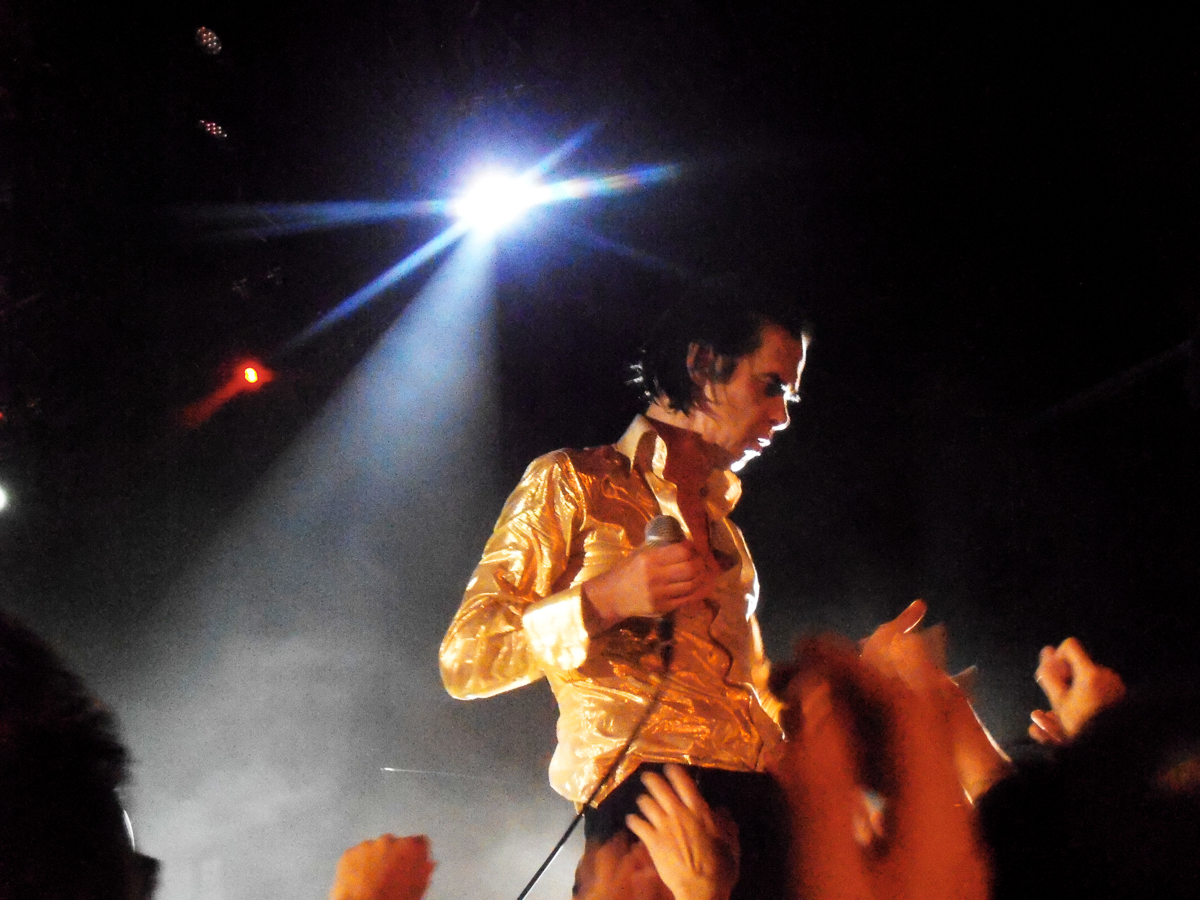 The night’s emotional apex struck the middle of the set when Cave took to the piano for “Love Letter” and “Into My Arms.” Positioned sideways, he played the keys with aching clarity as he sang about love’s arresting ways.

Midway through, Cave ditched the black suit jacket to reveal a gold lamé dress shirt underneath. By the end it was rumpled with sweat.

The set ended with a gunshot and some gauze to help the wound. “Stagger Lee” was as forceful, ruthless and vile as one could hope the murder ballad to be. Then “Push the Sky Away” flooded the park with its ominous drone.

The band returned for two encores, first tearing through the classics “Red Right Hand” and “Deanna.” The second was unexpected with Cave wading into “The Lyre Of Orpheus” for the finale. “Orpheus looked at his instrument / And he gave the wire a pluck,” Cave sang. “He heard a sound so beautiful / He gasped and said, ‘Oh my god…'”