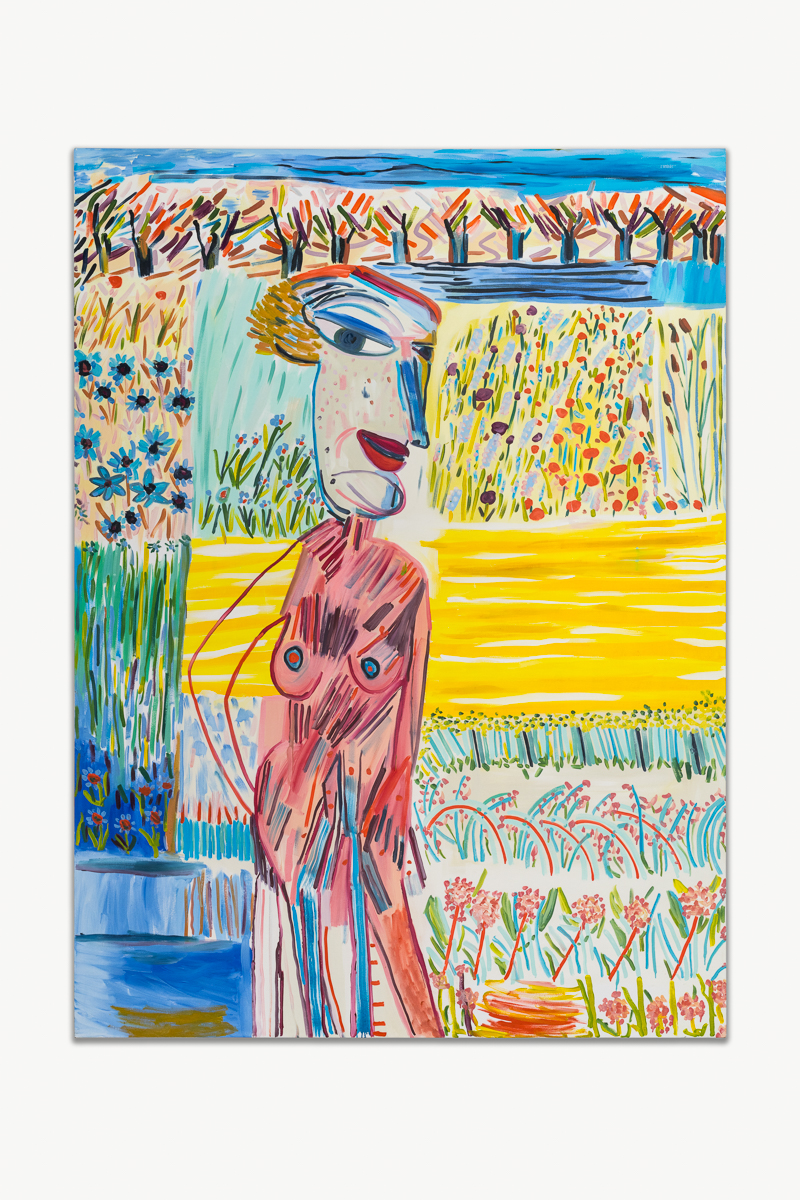 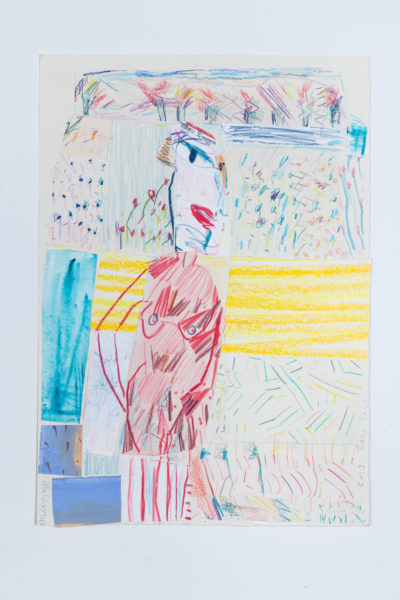 “In this series, I was interested in investigating expressive language in painting. My work was often called expressive or expressionistic, and I balked at this, but now I wanted to embrace it. I made the expressive looking collages first, then copied or tried to copy water colour and pencil scribbled gestures I had spontaneously made using oil paint.” Martin Maloney

The drawings show a scantily clad female figure often in just underwear, partly depicted in outline – saggy or fake boobs – drawn onto a mosaic of jump-cut styles and patterns salvaged from old, rejected drawings. These lonely figures disrupt the bucolic landscape with a sense of pathos.

I like the term ‘Participant Observation’ where you are both being something and commenting upon it. Field worker, as a title, hints towards that process. The female figures I painted looked like they were standing in made-up landscapes of gestural marks. So the field is literally a field.” Martin Maloney 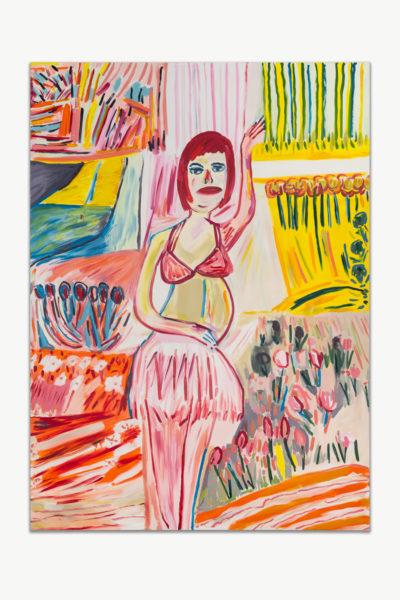 Maloney’s women are inventions: small improvised gestures made in a collage are then painted with penetrating concentration on a large canvas. Open to interpretation ‘Adieu’ waving is the sallow memory of a girl briefly known, maybe pregnant, her raised arm disappearing into the bleached landscape behind. Like David Bowie’s collaged songwriting, these studies give Maloney access to his entire repertoire of mark making as source material. He calls these collages “recipes” for his oil paintings as he tried to follow them to make the large-scale paintings.

“I live an urban existence. I am not much of a landscape person. Nature bores me. When I finished the drawings I was struck that the made-up women set in invented patterns and spaces casually reminded me of looking at prostitutes on the side of the road in Slovakia where I have a home… These women were working in a very unsightly job often associated with darkness down an alleyway, but these women worked during the day in a very beautiful landscape setting filled with sensual changing light. I liked the disparity of how urban they looked in short skirts and boots, as they stood all day next to a field, with rolling hills in the background waiting for some truck driver to stop. I wondered if my fascination with seeing them had somehow unconsciously came into my invented work.” Martin Maloney 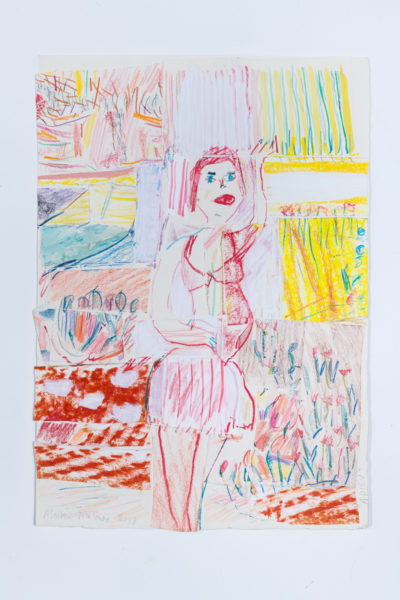 Sex is never far from Maloney’s thought. In 1999 he showed ‘Sex Club’, a series of large-scale paintings of gay sex in the exhibition ‘Neurotic Realism’ at the Saatchi Gallery to much controversy and acclaim.

“The only objective I had when I started making this series was to try to work out how to make a painting that would consist of a female figure in a landscape. This interested me as it seemed like classic subject matter from art history, now probably devalued as a theme but coming with the pedigree of a high art.” Martin Maloney

Maloney keys into his memory of art history and women depicted in landscape. Breathing new life into an old genre, these works call to mind paintings by Matisse [Decorative Figure] and Klimt [Portrait of Adele Bloch-Bauer], and further back to the ornamental flatness of Romanesque Frescoes. This heightened procedural awareness elicits numerous questions about centuries of painting the female form and its objectification. 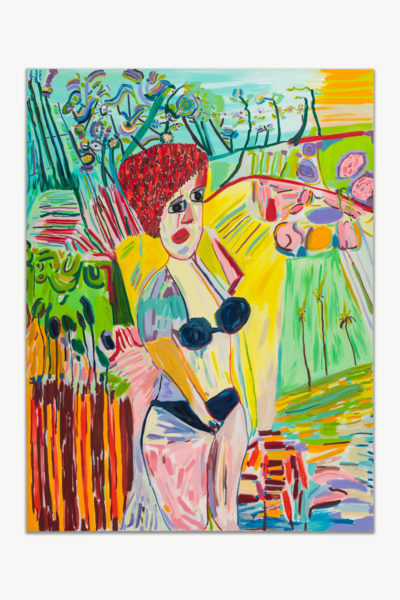 “I was looking at lot of art historical depictions of women from ancient fertility goddess to the distortions and exaggerations of the twentieth century. That was my inspiration. I saw that the female body could be subjected to much free license away from the confines of naturalism in art. Over the years it has been a perfect vessel for holding a wide variety of projected emotional meaning .” Martin Maloney

Maloney’s paintings and asks you to look at unlikely people and consider their vulnerability and awkward humanity. In doing so he makes work  which are unexpectedly beautiful; your eyes linger to capture the imprint of memory, which inspires deep empathy. 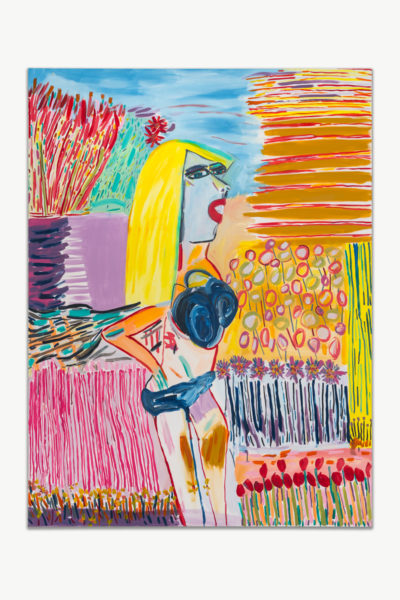