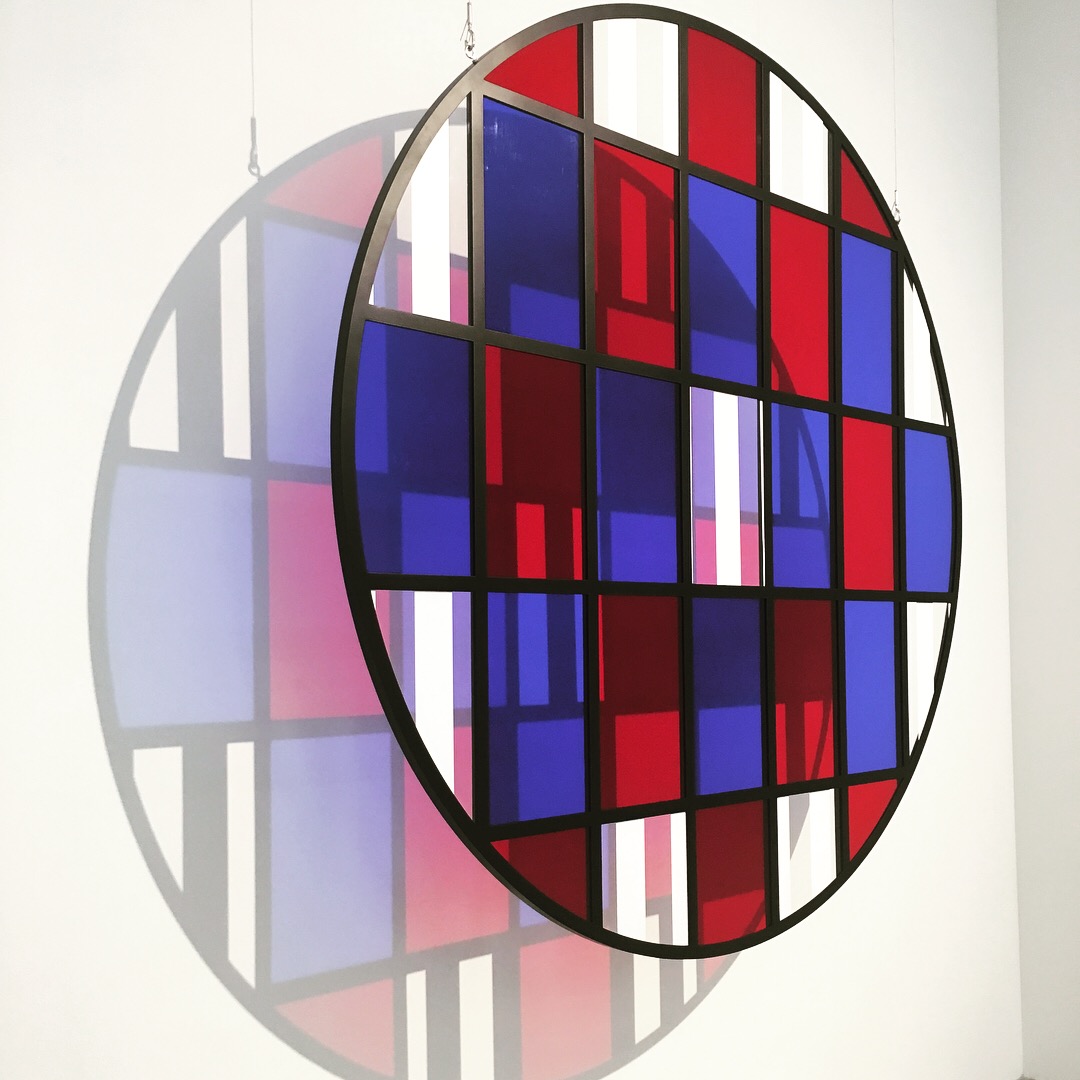 Don’t miss this opportunity to get up close and personal with one of the world’s most prominent conceptual artists, Daniel Buren, featured in a solo show at Bortolami, 39 Walker Street, New York.

“Invention and Obstinacy” is how Daniel Buren describes his work. Though, don’t call him an artist, as he claims, “I was always embarrassed by the term, ‘an artist’ or ‘a painter.’ I am certainly closer to an artist than a butcher is. Anyone can call himself an artist; a shoemaker may also be an artist… The term is blurred. Let’s say I work in the realm of visual arts.” Ironically, for “a worker in the realm of visual arts,” receiving the Praemium Imperiale in 2007 for painting is kind of a provocation. But Buren loves provocations. In 1967, the French artist also stated, “I am not a painter” and no matter how tempting it might be, refrain from describing his artworks as “installations,” too. In his words, “Installations are things you see in the vitrines of department stores. Installations are objects that you can put anywhere. I am not interested in installations.”

Buren started his artistic practice in Paris at the beginning of 1966 as a founding member of the shortly lived BMPT Group (Buren, Mosset, Parmentier, Toroni). Consistent with Buren‘s Dada-like contradictions—though Dada is another association Buren will not subscribe to—is his claim that BMPT was never a group: ”The critic Otto Hahn got it all wrong by homogenizing the individuals into a false group identity.” Nevertheless, as a unit, BMPT brought forth questions about the notions of authorship and originality, implying that the art object was more important than its authorship. The “group” pursued a radical criticism of the traditional methods of art by theorizing its new social and political functions. Intrinsically Minimalist, BMPT’s works were methodical, with each artist’s “glyph” essentially functioning as an individual signature. Buren worked solely in vertical stripes, Mosset through black circles against a white ground, Parmentier with horizontal stripes, and Toroni with brush marks made with imprints of a no. 50 paintbrush repeated at perpendicular, 30-centimeter intervals. While each artist had his signature style, they all claim (in jest, one would assume…) to have physically made one another’s paintings. Although BMPT disbanded early in 1968, the group assembled one of the most significant clusters of artists operating in the panorama of conceptual and contemporary art in 1960s France.

Daniel Buren is best known for his use of contrasting 8.7cm wide stripes to reveal the features and dimensions of a site, often transforming the environment for which it was specifically designed. He alters the perception and context of one’s surroundings by enhancing lighting, obstructing viewpoints, and highlighting certain architectural features. Buren constructs his work—much of which is temporary—in the architecture of both public and private spaces ranging from subway platforms to museums. His “works in situ,” – never installations—cannot be extracted from their surroundings. Such works, temporary or permanent depending on the commission, are intrinsic to the space. In the French artist’s words: “My work is never autonomous. My work is a part of everything around it and it has the power to transform everything around it.” For Buren, the original intention of the work was to be absolutely neutral. Through use of “boring and meaningless stripes” (in the artist’s words), Buren managed to shift the viewer’s attention from the stripes to the space itself, be it a wall, a street, The Grand Palais in Paris, or The Guggenheim Museum in New York. The iconoclastic artist explains, “ The stripes helped me to reveal the wall and the space. As soon as I glued my stripes to the wall or billboard – the street, the whole city became part of my work! That’s the difference between a painting on the wall and my work applied directly to the wall.  the stripes helped me to reveal the wall and the space. The difference between a traditional painting and my stripes on a wall is that when you try to see the painting, you cannot see the wall. My interest was in making it possible to see the wall or billboard, or curtain, or whatever material I was using. And not only did it become possible to see the wall itself, but also around it and behind; the wall or the background became part of the painting, whereas traditional paintings always were separated from the wall by their frames.”

Daniel Buren was able to transform pure strategy in an art form by unmasking contemporary art’s limits and contradictions.

“Because painting is a game”

The Sacred and Mundane

Suspended in the gallery space at oblique angles from one another, the Tondi series functions as a visual hyper-loop to another dimension. The Tondi, meaning “round” in Italian, consist of a circular black steel frames that are 85 inches in diameter, each enclosing thirty-one 8.7 cm. wide, transparent and/or translucent colored or mirrored panes. On view at Bortolami New York until October 13, Buren’s Tondi have the power to magically transport the viewer to the feet of the nave of a gothic cathedral in France, resplendent in the reflected multicolored light pouring through a circular rose window, or alternatively, to your grandmother’s kitchen window, adorned by a kaleidoscopic, hummingbird patterned stained glass window panel. Albeit a more psychotropic interpretation, this instance remains consistent with the artist’s early highlighting of space around his “in situ” works, as viewers are not perceiving the gallery’s wall per se, but the imaginary setting, sacred or mundane, that the Tondi evoke in their minds. Every “Tondo” presents a different pattern of primary colors, in a vaguely Mondrianesque way, or primary and secondary colors, and mirrored panes. Sunshine projected through the Tondi, creates a non-material weaving of light, a “ghost” of each “Tondo,” visible either on the floor or the white wall according to the viewer’s position and time of the day. In this way, Buren’s intentions remain ever-present: to create an interaction and dialogue between the space and his work. The Tondi highlight the whiteness of the wall and the opaque gray of the concrete floor while, in turn, the space “tames” the exuberance of the colors, creating an introspective version of the artwork itself.

Bortolami presents Daniel Buren’s Tondi, a series of situated works composed of steel, multi-colored acrylic, mirror, and white 8.7 cm stripes. The Tondi were initially exhibited at Le Centquatre-Paris in France in 2015, and subsequently at the Museo de Arte Moderno in Bogota, Colombia, in 2017. In their new, third configuration at Bortolami, they are situated within the specific architecture of the gallery. A limited-edition, fully illustrated publication with texts by artist Liam Gillick and curator Annie Wischmeyer will accompany the exhibition. The gallery will simultaneously present the new documentary film on Buren’s work, Beyond time, as far as the eye can see. The six-and-a-half-hour film organizes his expansive career in several segments, each focusing on a specific aspect of his work, and functions as a comprehensive cinematic catalogue. Conceived to be viewed in chapters, the film will be screened in the viewing room daily from 11:00am to 5:30pm.

Many thanks to my Cicerone, Bortolami Gallery’s Artist Liaison Evan Reiser, for brilliantly illustrating Buren’s Tondi to me and for sharing many interesting anecdotes on Buren’s art and career, including the following: “In 2012, MoMA published a “What is Contemporary Art?” guide for kids with color illustrations featuring 62 artists. Buren is included along with Warhol, Beuys, Bourgeois, and Koons.” 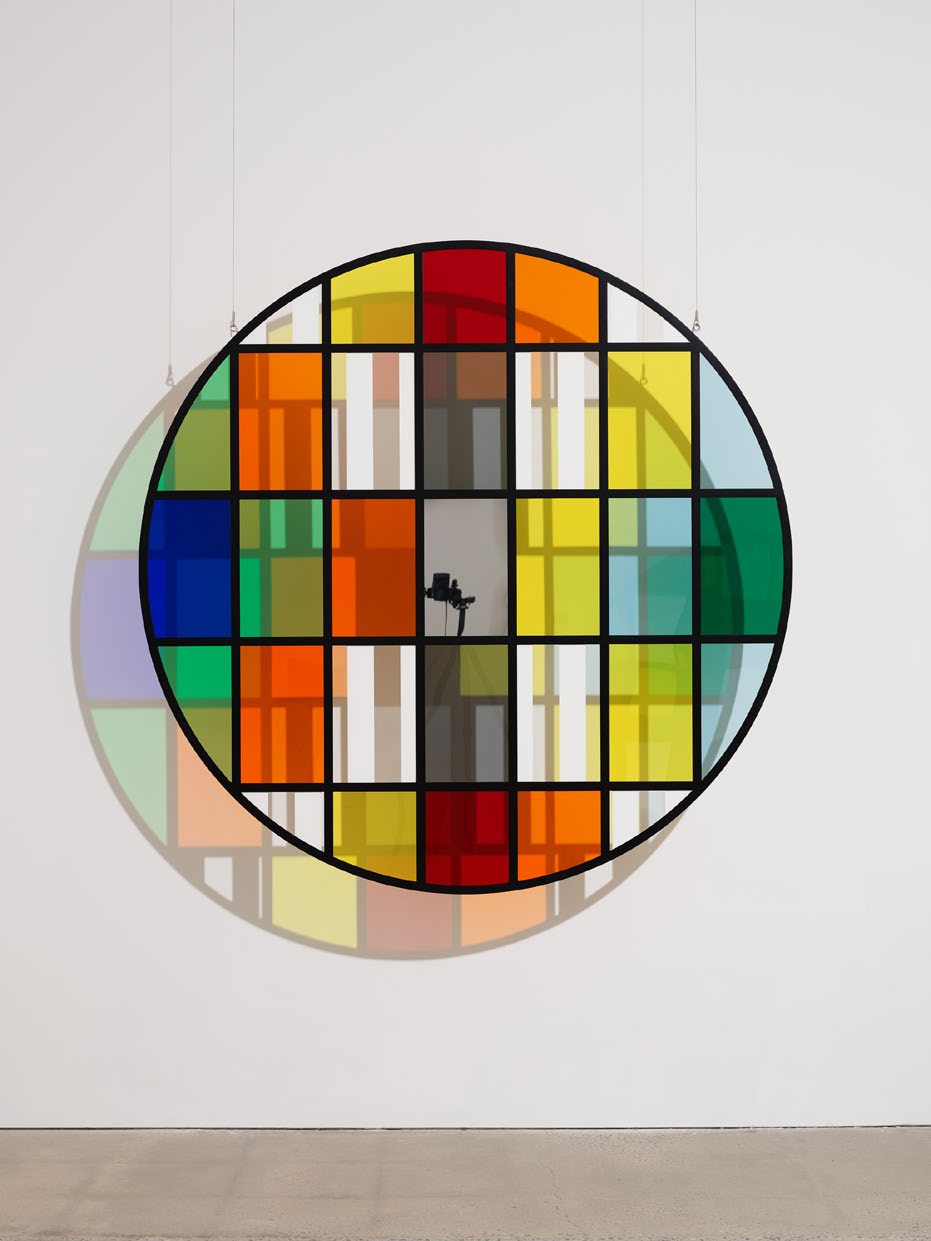 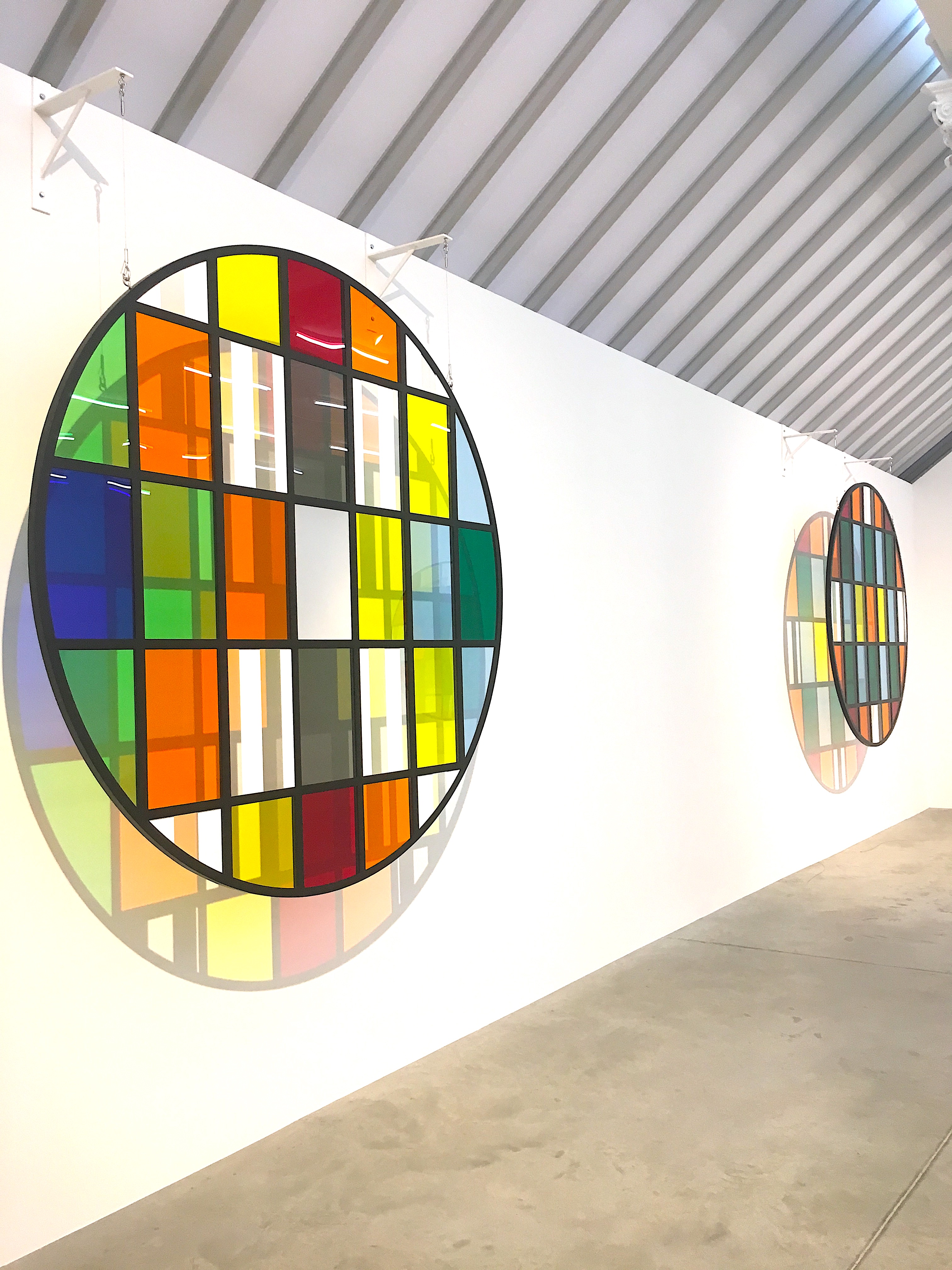 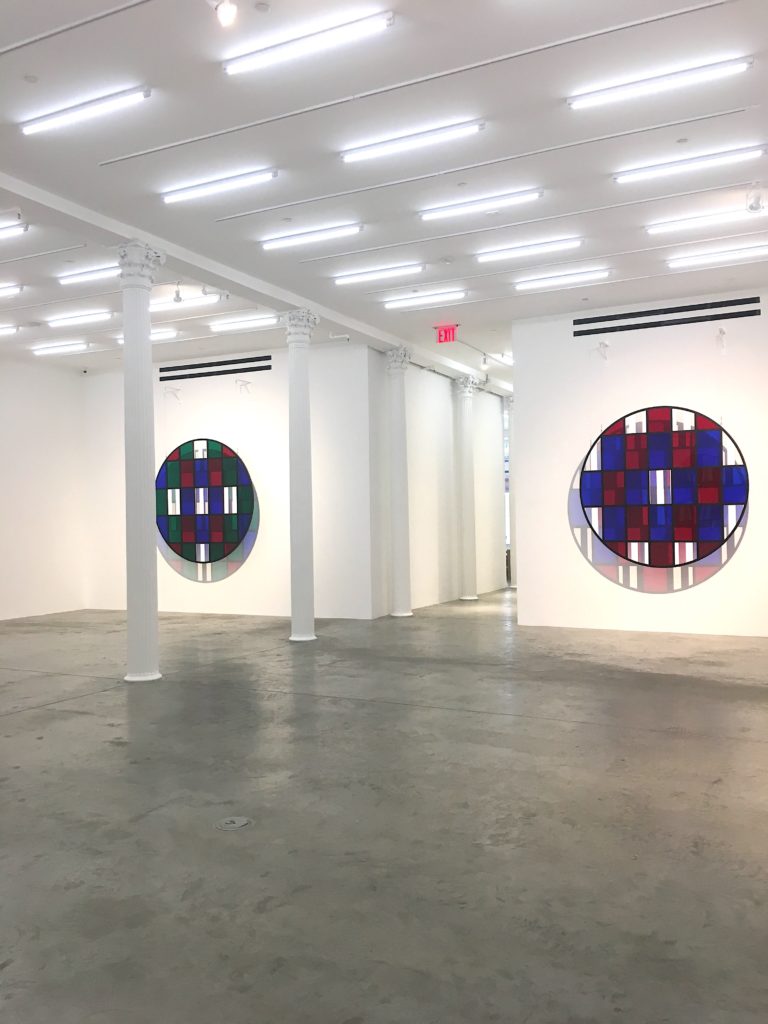 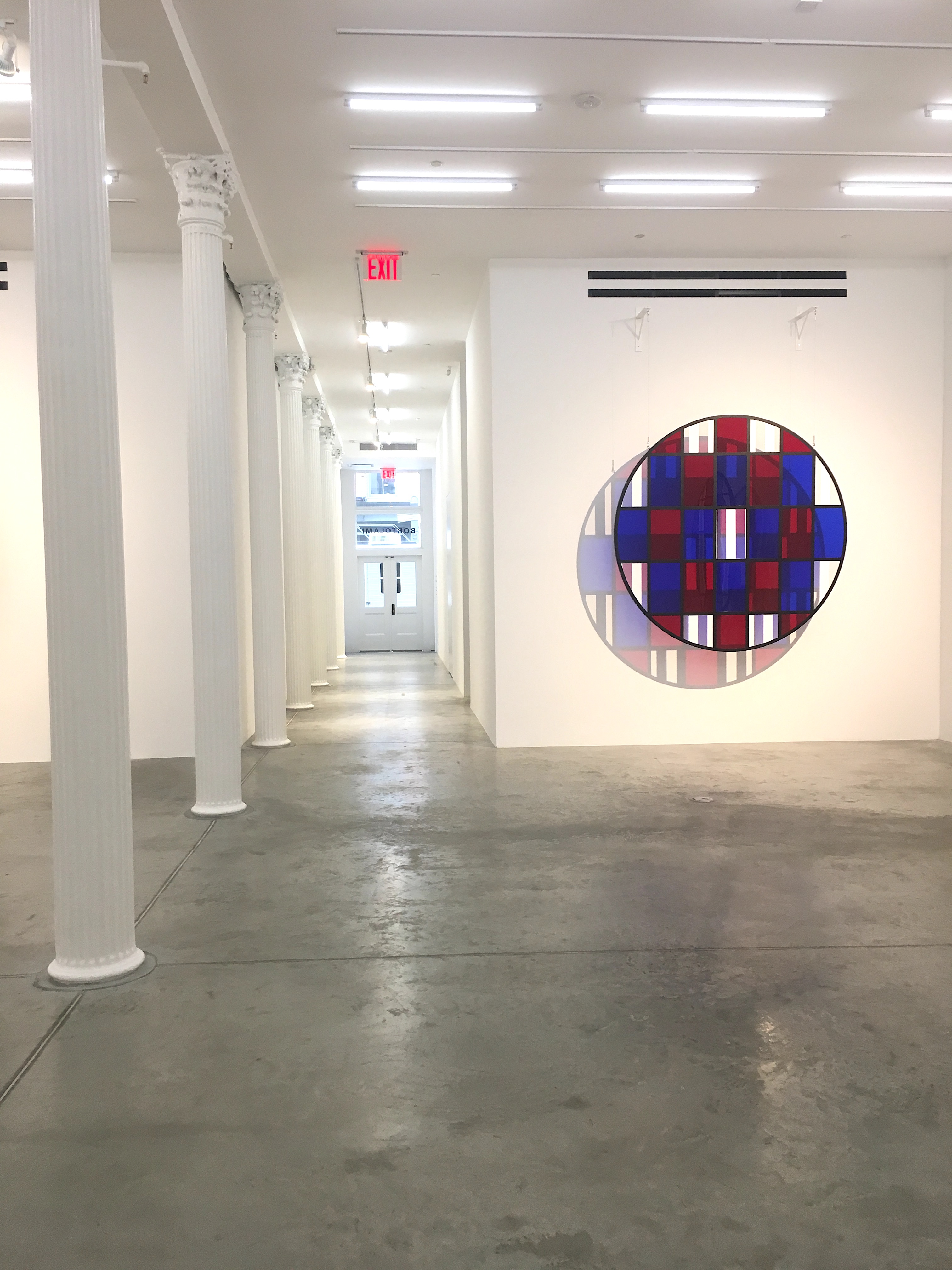 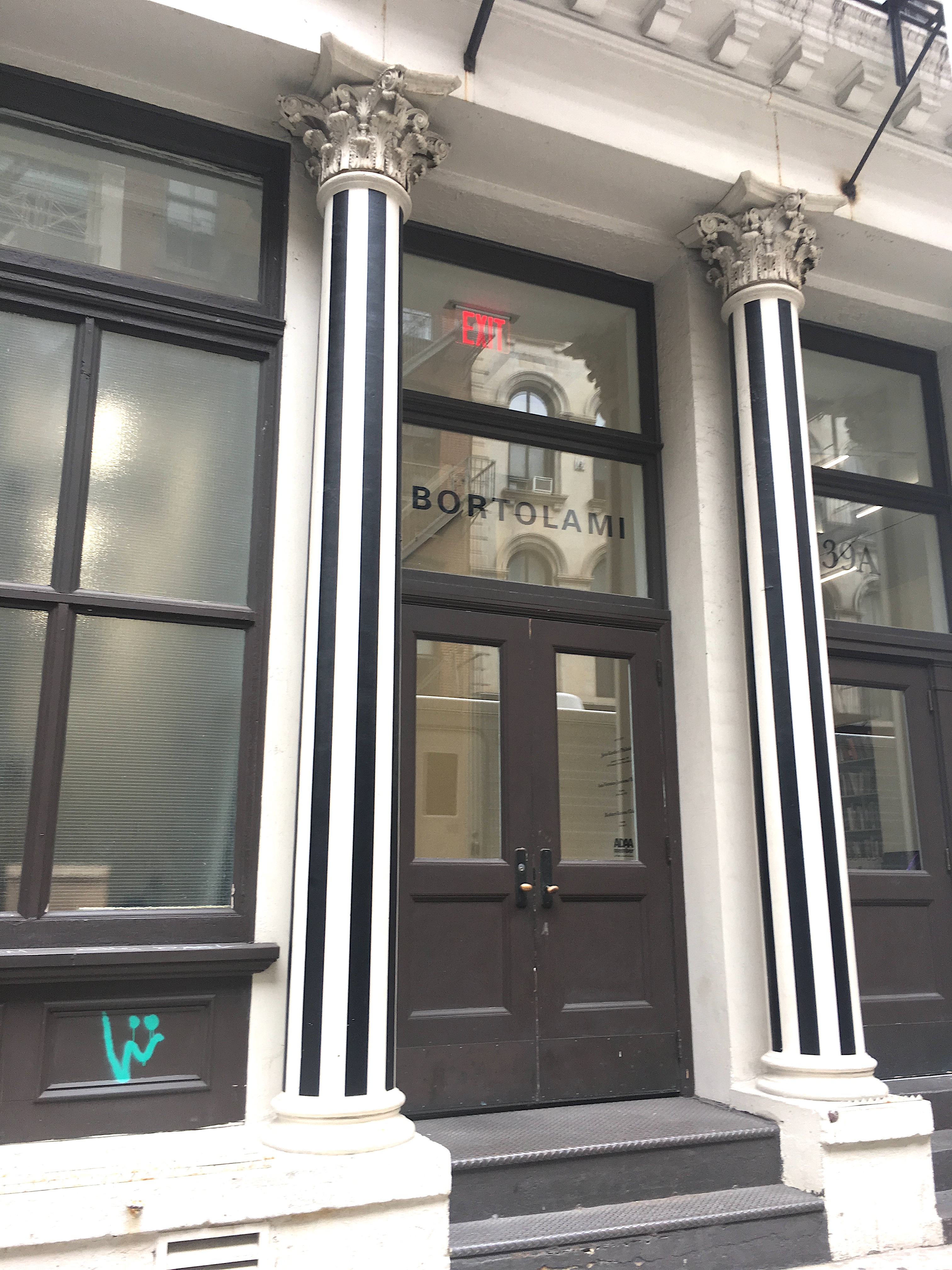