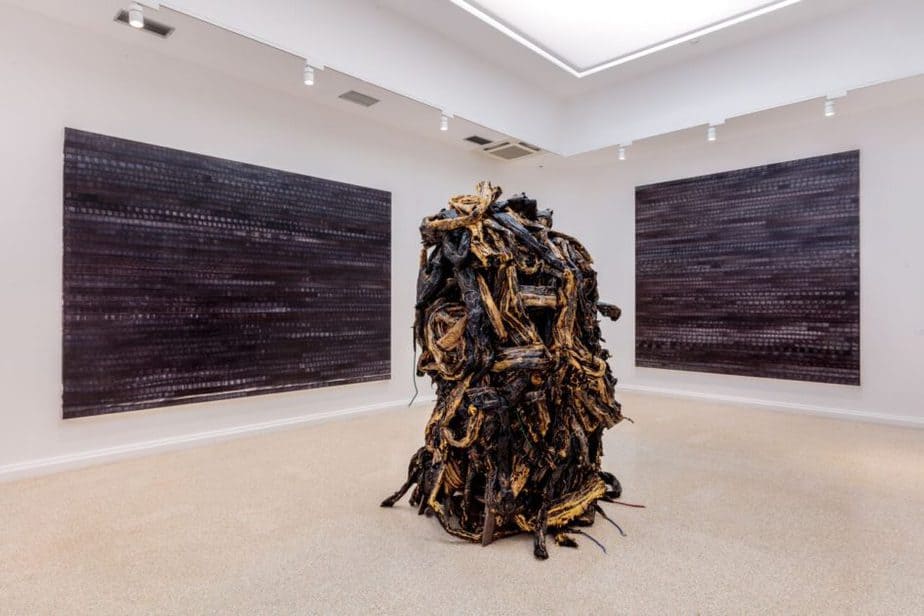 What does it mean to still be a citizen, even when you do not feel represented by your government, and yet you are called to represent your country in an international art exhibition? Los Angeles-based artist Mark Bradford tried to tackle this question in his presentation at the United States pavilion at the 57th Venice Biennale.

The project consists of a series of monumental installations including new and recent paintings and sculpture, alongside an existing video work that, quoting from the press release, “gains new relevance in current political climate”. Blending ancient mythology with America modern crisis, Bradford gives form to a multilayered narrative that intertwines personal experience and social history. Visitors are introduced to Bradford’s personal and artistic journey even before they enter the ‘Jeffersonian’ US pavilion. Positioned over the pavilion’s facade, the work Hephaestus (2017) opens the path to the pavilion with its two large slabs of cement board engraved with the first-ever poem written by the artist. With its unadorned semblance and resentful tone (When I got up/My foot was broken/Limping through the ruins of a/Burned-out promise), it foreshadows the whole exhibition. 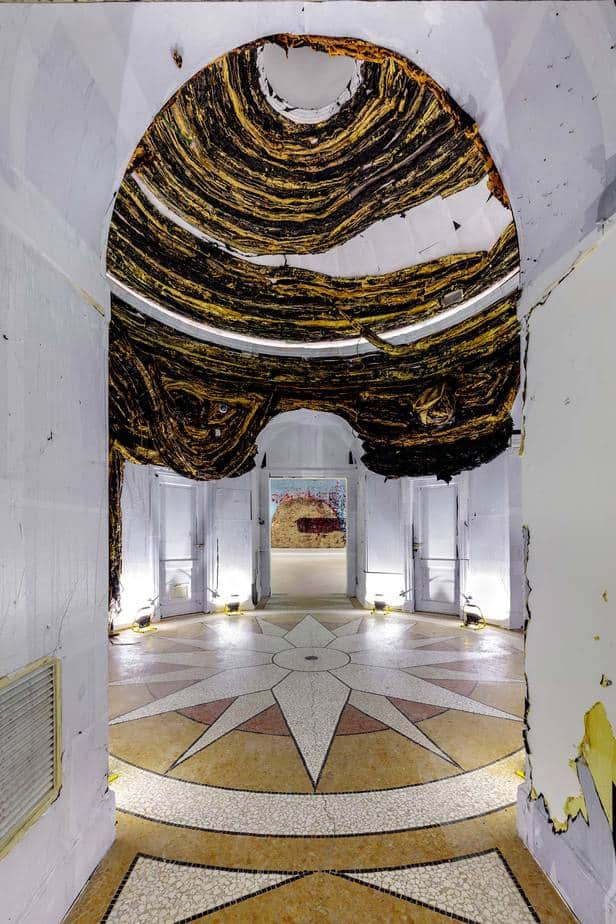 Interestingly, Bradford forces visitors to enter the pavilion from a small, white door on the left side of the building, which –I discovered later- used to be the servants’ door. As I walk in, I find myself in front of a giant, swollen mass that extends from the ceiling of the room. With its black and red pockmarked surface made of canvas, lumber, loan sheeting, and drywall, it forces me to a deft navigation of the space (I can just move all around it), literally pushing me to the margins of the room. Titled Spoiled Foot (2016), this work too draws from the story of Hephaestus, god of forge, who according to a Greek myth was cast from Mont Olympus for being born lame. 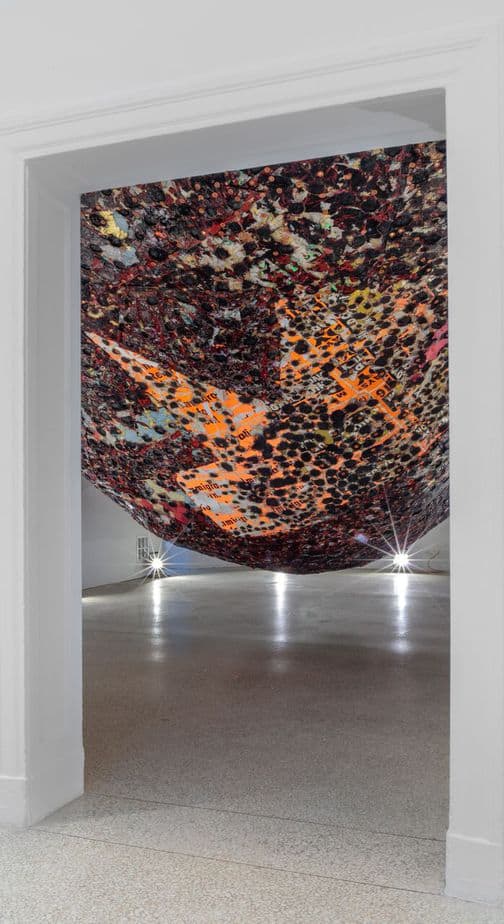 The second room of the pavilion presents a series of new paintings and a new, tentacular sculpture titled after the Greek mythological character Medusa, a winged human female with living venomous snakes in place of hair. A tangle of bleached black masses of paper, rope and caulk, the work appears even more powerful surrounded as it is by the shimmering black -purple giant paintings from Bradford’s latest body of work. With these works on canvas, Bradford pushes painterly practice to its limits. Using such an humble material as hair endpapers he draws upon the canvas fluid surfaces that give the illusion of movement, and even of turbulence. Materials are particularly important in Bradford’s practice, and particularly valued by the artist for the social and political significance they have. Having the artist worked alongside his mother for decades in her beauty salon, it should not surprise that he uses these soaked, black bleached endpapers to talk about the use, abuse and rage of women. Interestingly, all the paintings are titled after Sirens’ names, Thelxiepeia (2016), Leucosia (2016), Raidne (2017). 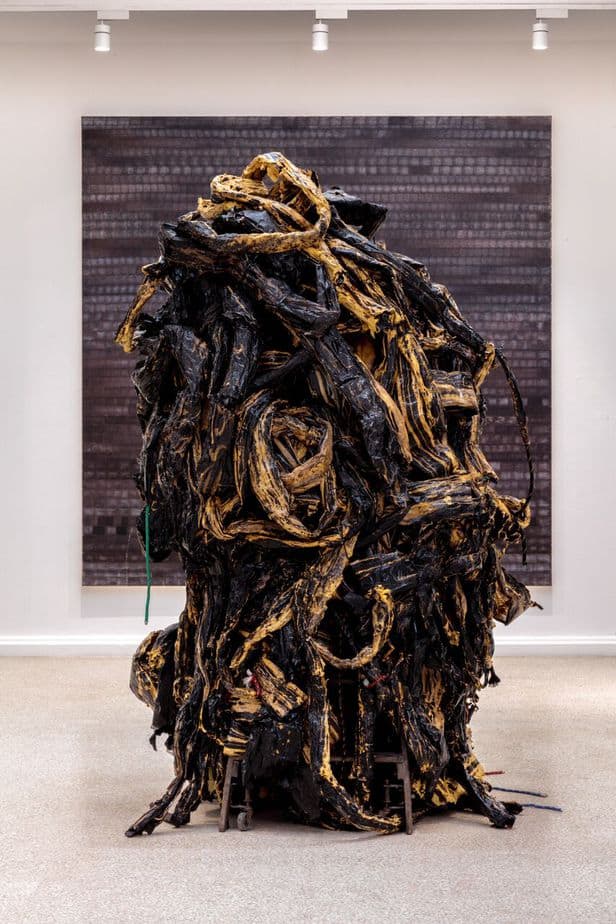 The iconic space of the pavilion’s rotunda has been completely transformed by Bradford site-specific installation Oracle (2017). Through the use of skeins of bleached and black paper, the artist turns the neoclassical space into an ancient grotto. As I leave the obscured skylights and plastered walls of the rotunda, and slip into the next room, I see new monumental abstract paintings made of commercial paper which the artist bleached, soaked and molded by hand. The final room of Bradford’s project -undeniably the most poetic- hosts a video work titled Niagara (2005). The video depicts the artist’s former neighbor walking down the street and away from the camera, exactly as Marilyn Monroe did in the 1953 film of the same name. And, yes, this work does “gain new relevance” in the context of the current political climate, considering the police violence that ignited the Black Lives Matter movement in recent years in America. 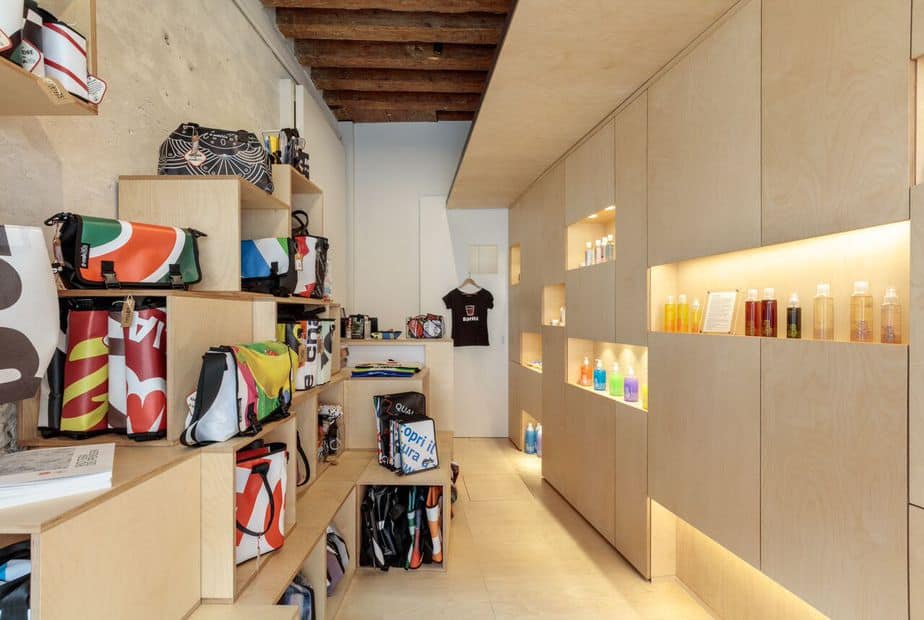 Nevertheless, Bradford’s commitment as an artist goes far beyond than its physical contribution at the US pavilion. The artist also devoted to a six-year project with local non-profit organization Rio Terà dei Pensieri. Aiming to highlight both art’s ability to stimulate social change and the virtues of the cooperative model, the project titled Process Collettivo provides employment opportunities and other services to inmates and to people recently released. During the biennale, Process Collettivo is manifest in a storefront space located in the Frari district, and used as a sales point for artisanal products made by Venice prison inmates in order to sustain the project itself. 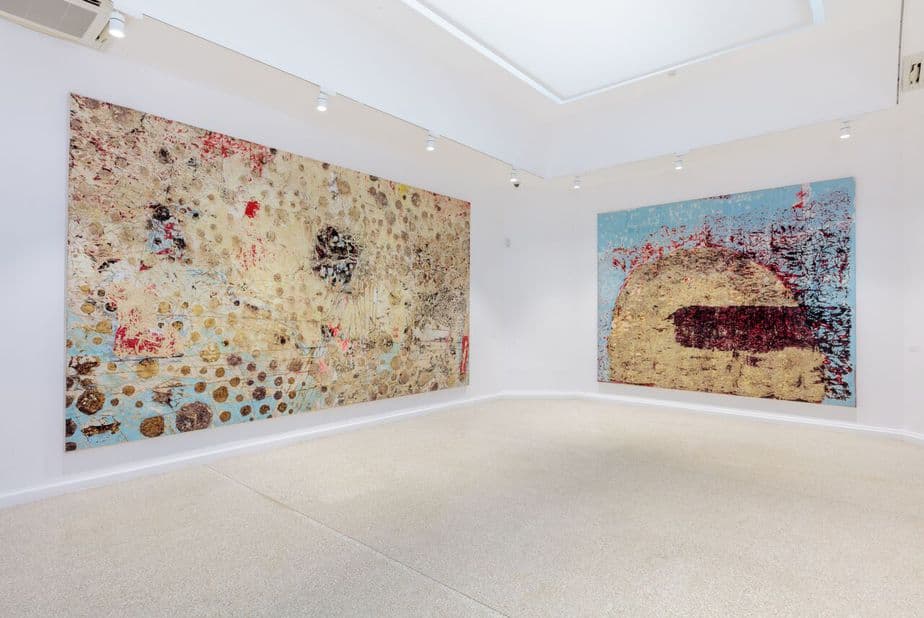 Utterly combining personal history with Greek mythology and universal struggles, Tomorrow Is Another Day makes evident Bradford ‘s peculiar, visionary yet extremely concrete capacity to mingle art practice with social action. The artist said: “the exhibition is not just about me, but about all of those who feel like they’re on the periphery”. And the exhibition truly talks about being on the periphery, both on a formal level and in its content. It is sad that no signs of the Process Collettivo project find room within the pavilion’s galleries as I felt the participatory project is sincerely part of the whole contribution by Bradford to this year’s Biennale. And I think Bradford’s exhibition surely deserved a mention from the Biennale jury, as it puts forth questions about political, ethical and structural marginality that are now more urgent than ever in Trump’s America.