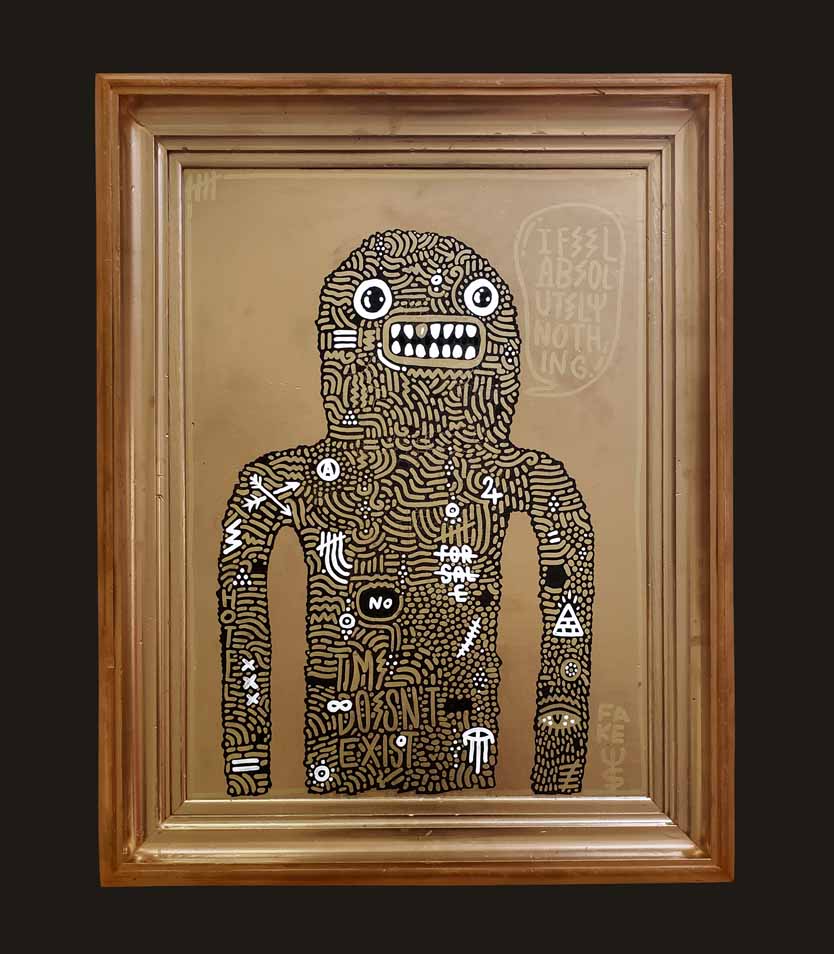 It is, in these modern times, no revelatory pronouncement to declare the art world as one overflowing with an abundance of artists, creators, and muses – those that inspire art and creativity. We mustn’t, however, forget those who have that all too arduous and unforgiving task of representing them: the magnificent, tedious, sometimes elusive, and usually misunderstood role of the gallerist. Art, as we have been taught to decipher, is an exclusively subjective experience. Ironically, though, the part and parcel task of these guardian’s of art is to seek out work that will not only, and perhaps most importantly, sell, but will ultimately permeate the eyes, mind, and emotional psyche of the viewer. That alone is no small feat by any measure of the imagination.  It is a task whose demand on the gallerist is so incredibly sophisticated that credit must always be given to the person who manages to overcome and succeed; and all while introducing to the world refreshing and exhilarating topics on socio-gender, non-conformism, and politically charged commentary. 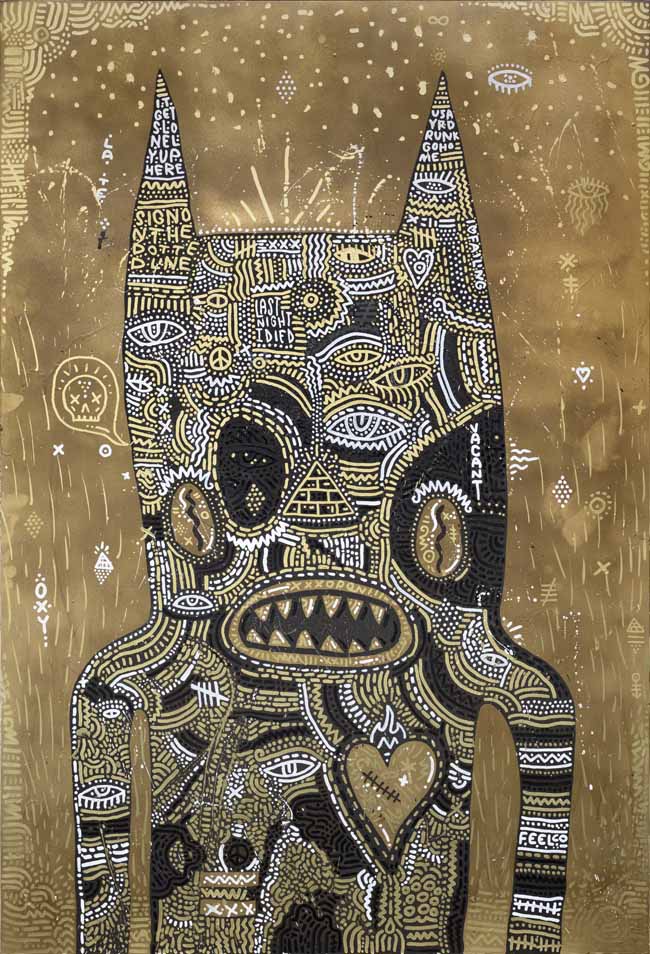 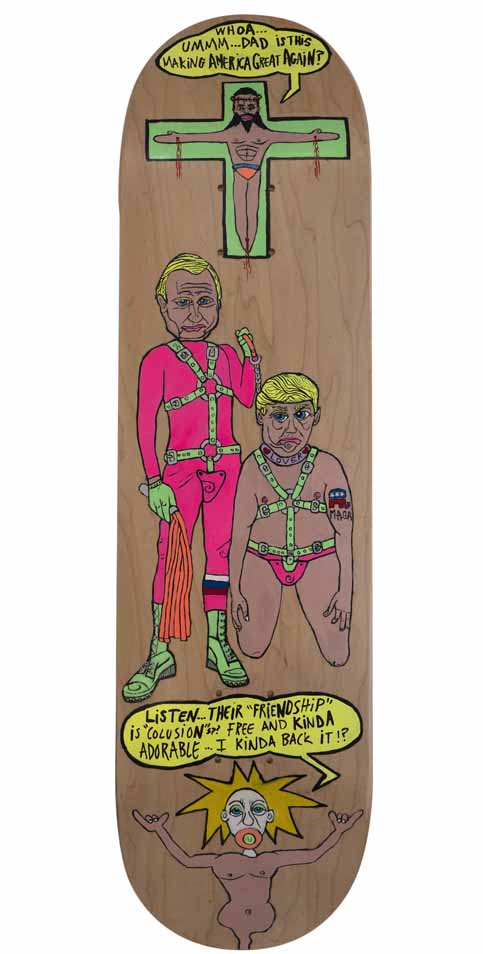 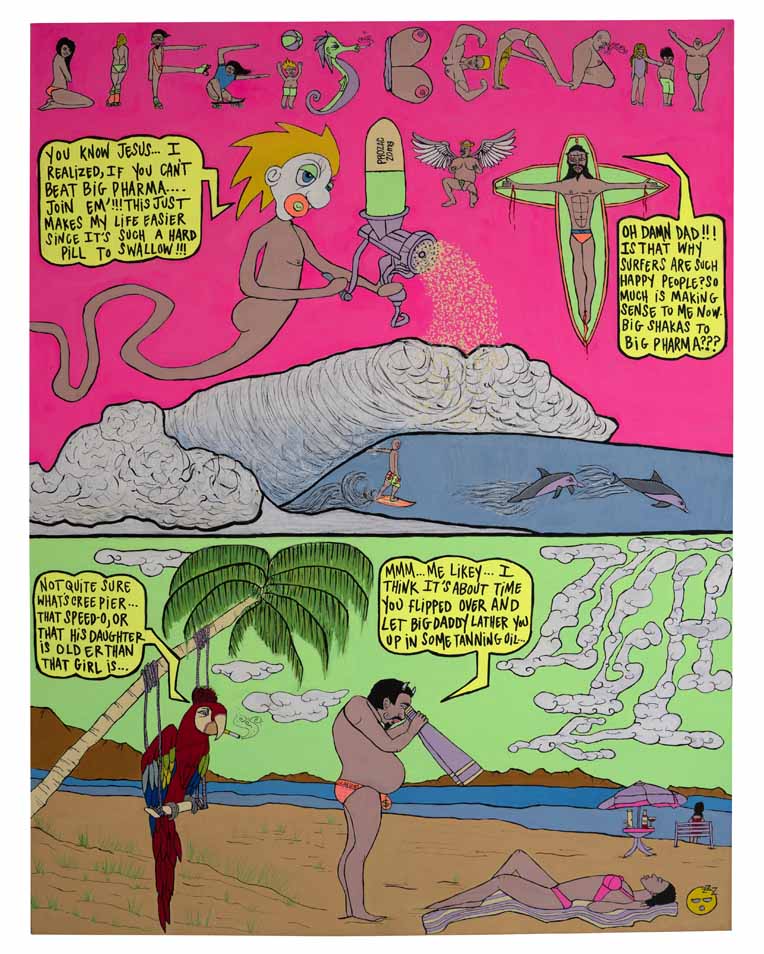 One such gallery, led by the liberated and fierce yet playful experimentalist (and wonder woman) Holly Purcell, is FF-1051 Gallery located on South Fairfax, in Los Angeles.  Under the helm of Purcell, FF-1051 consistently and unequivocally exhibits works by artists both renowned and emerging, that provoke thought and conversation, topple popular ideology, and question the future or our very existence, which in ones view is what the whole damn this is about! Not merely art for art’s sake; but art for humanity’s sake. 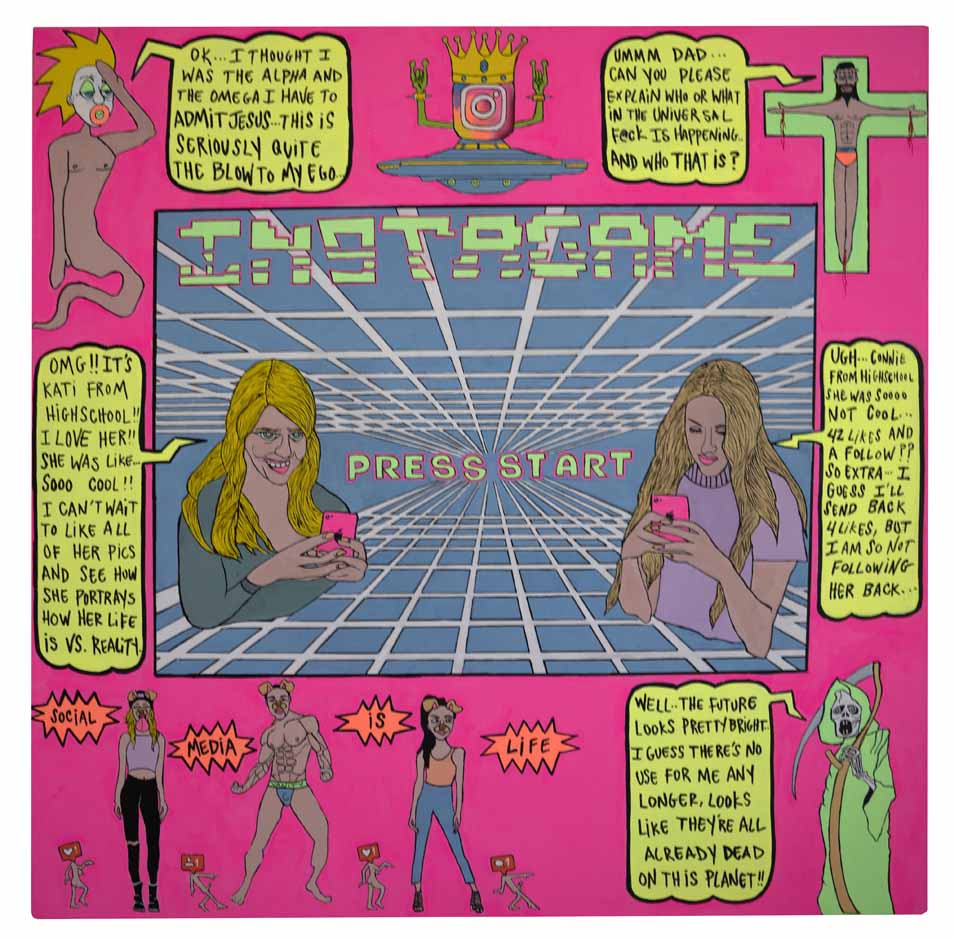 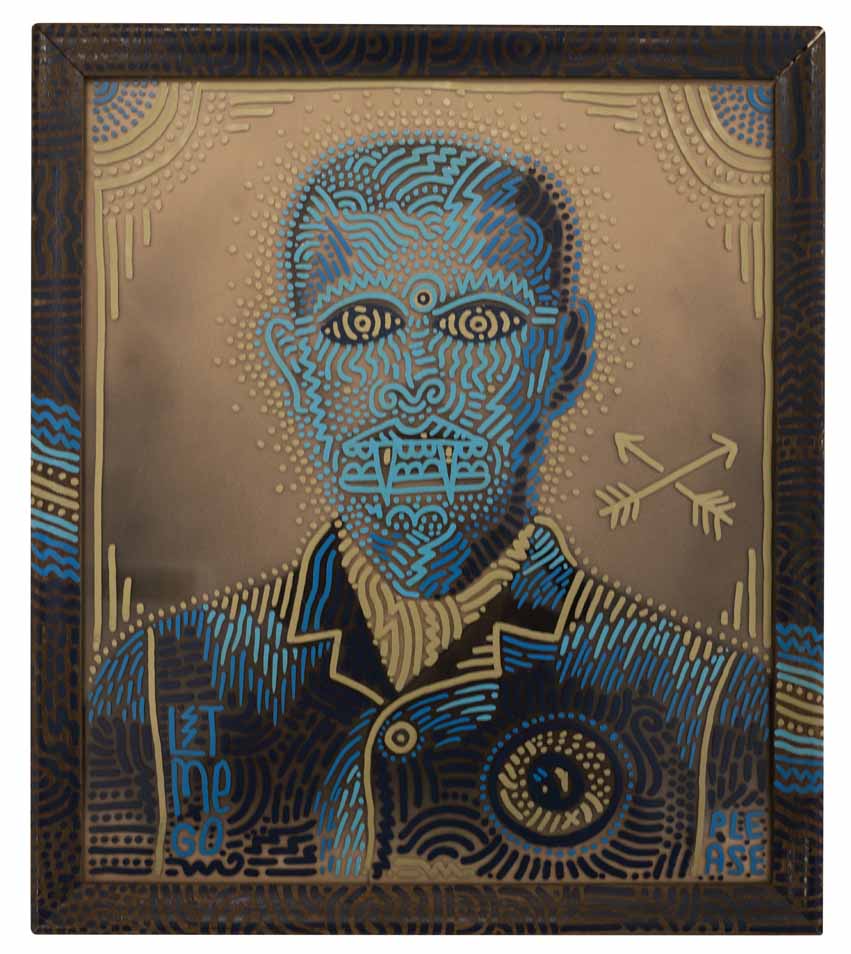 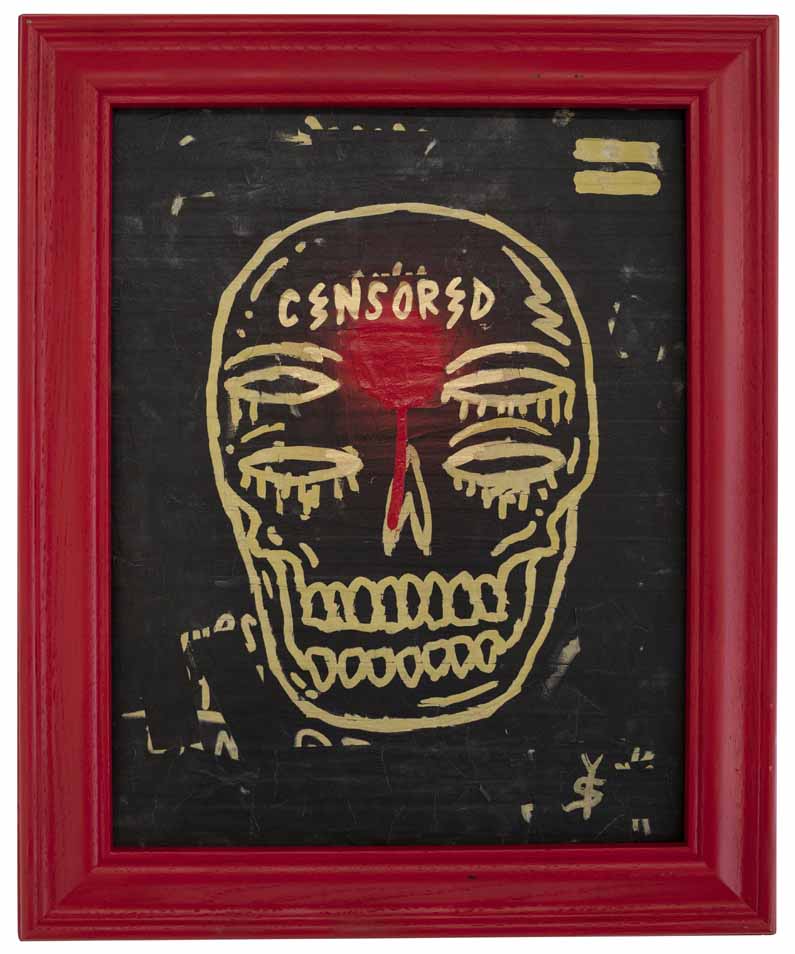 It is no wonder that over the past month or so, FF-1051 Gallery has once again presented new works from two internationally renowned and excitingly controversial Los Angeles based artists, Nick Van Hofwegen and Sean Kushner. Van Hofwegen, an accomplished artist most known for creating art of another sort, music, with his notable band Young & Sick, has officially entered the world of visual art with this his first exhibition anywhere.  His works are a piercing exploration of the spirit underlying his music, transcending across materials with a childlike playfulness, toying with totem animals and other worldly creatures that have become his signature style. The shapes, colors, forms, and depictions take direct influence from Van Hofwegen’s favorite artist, Joan Miro, and that is no surprise, for works captivate in their transformative prowess. 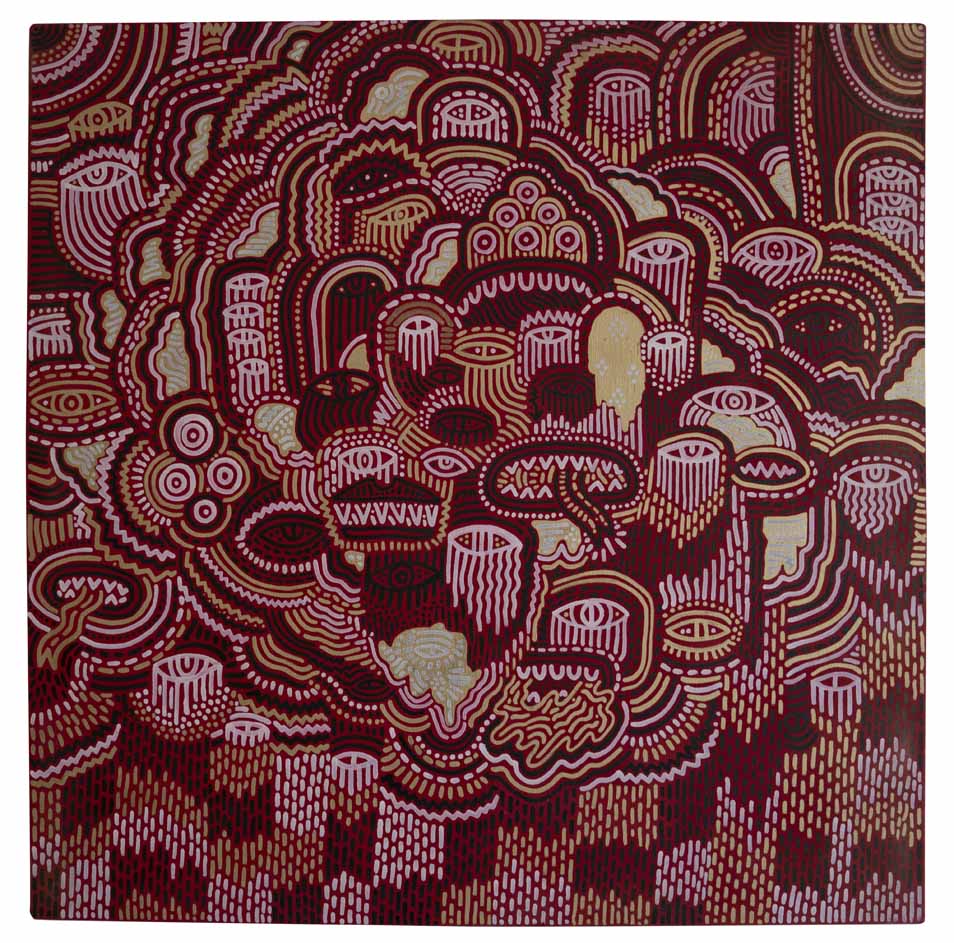 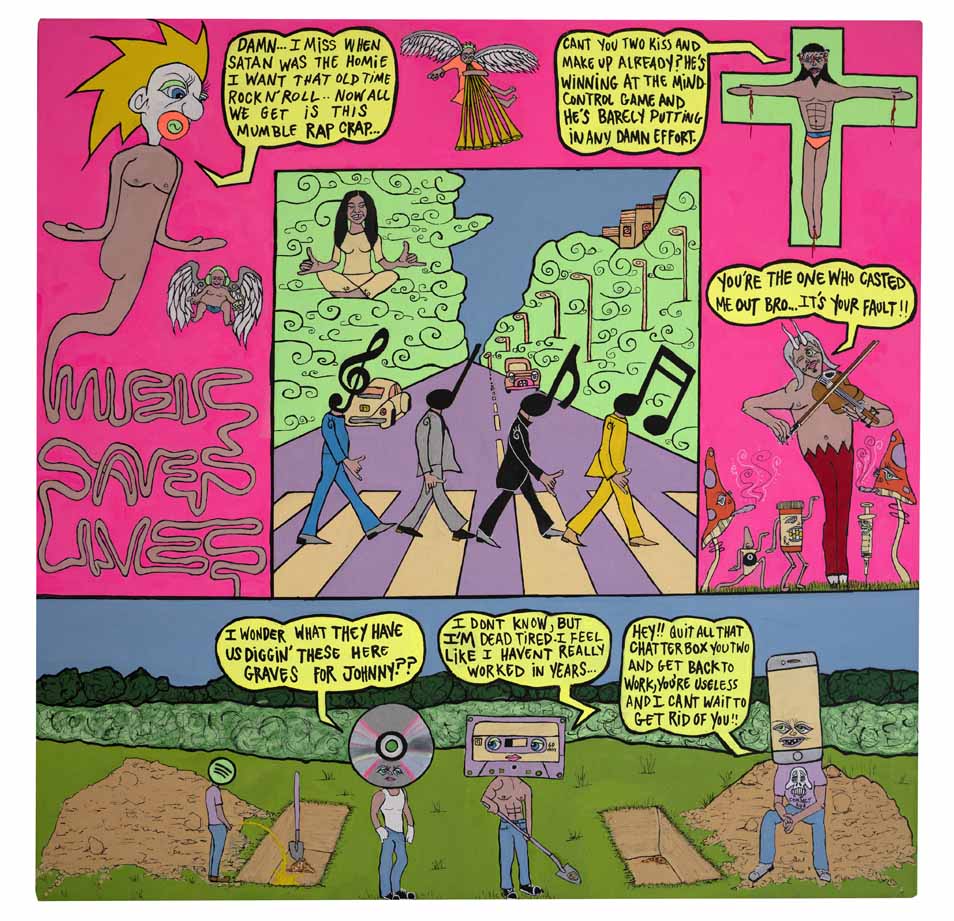 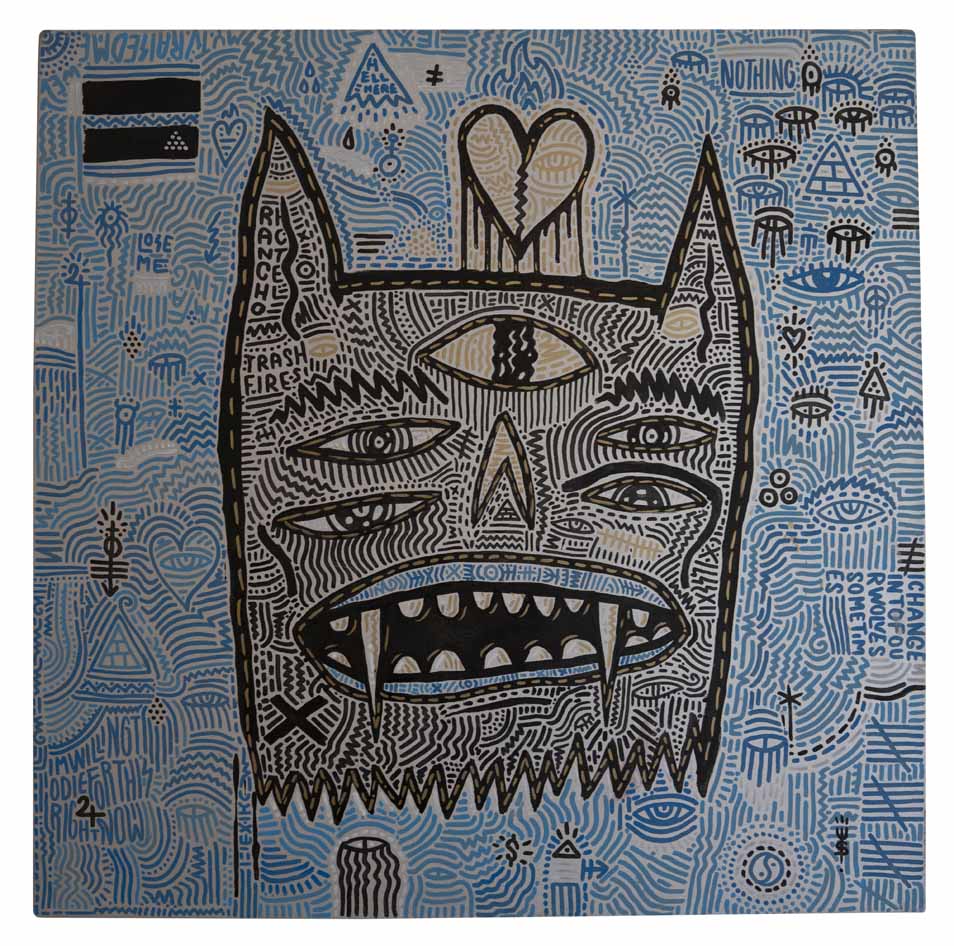 The artist Sean Kushner is a staggeringly intuitive and aware practitioner with a keen and absolute eye for depicting instances and stages of the human psyche from daily life, as if he has absorbed a snapshot or a picture. Influenced by graphic novels that use neon color palettes to deceive the dark content it depicts, Kushner’s subject matter is sometimes so wholly grotesque, yet utterly engrossing the viewer can hardly keep from studying, it manages to thread the line between fact and truth in highly stylistic depictions. 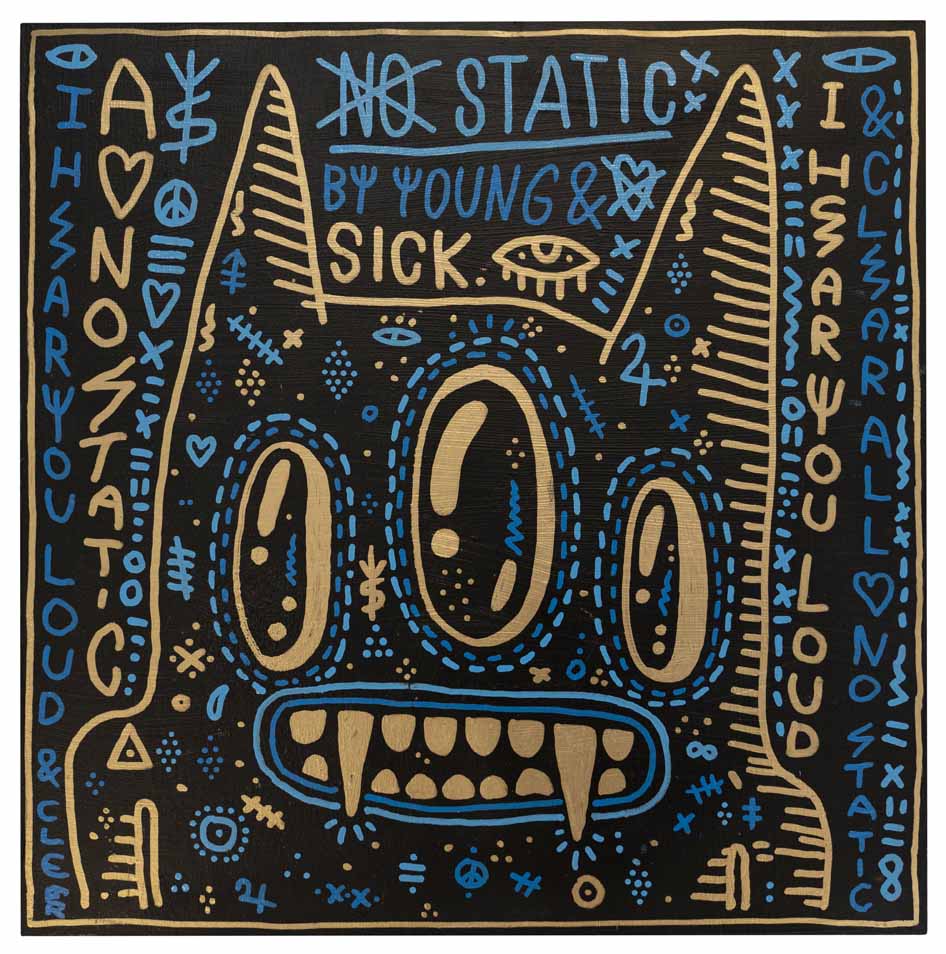 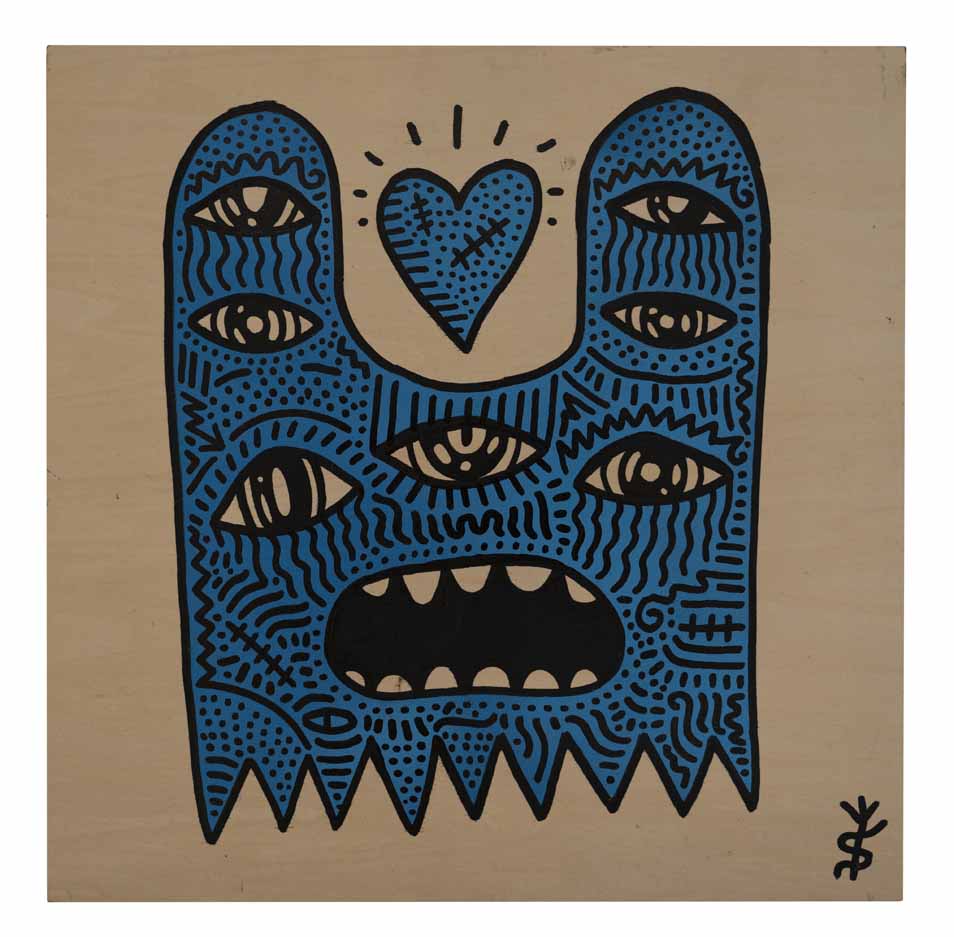 There is no doubt that these works also take influence from his skating and surfing background. Kushner refreshingly illustrates our darker innermost secrets and yearnings with figurines that at times crave affirmation, and are sometimes physically obsessed with managing their appearance. In some cases, these figurines develop material and notorious obsessions that hauntingly cradle a want of self and a need of being; which inherently topples the edge of self-destruction. By having his characters expose their darkest, earnest selves, Kushner is bringing to the forefront the ever-debatable question of what might be considered worthwhile, respectable, and worthy. 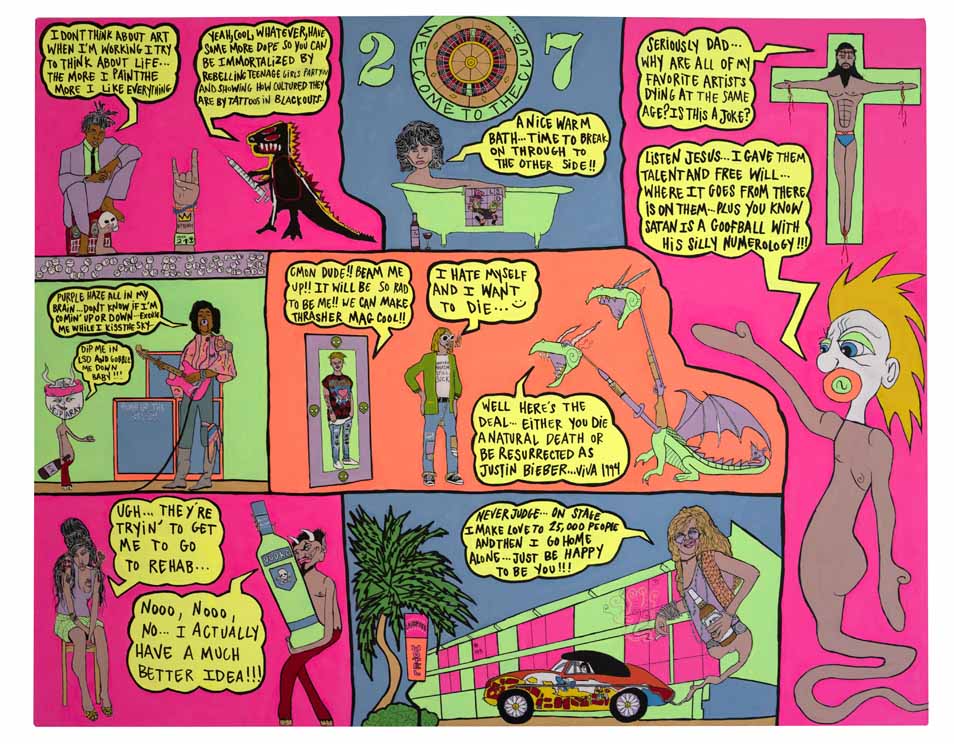 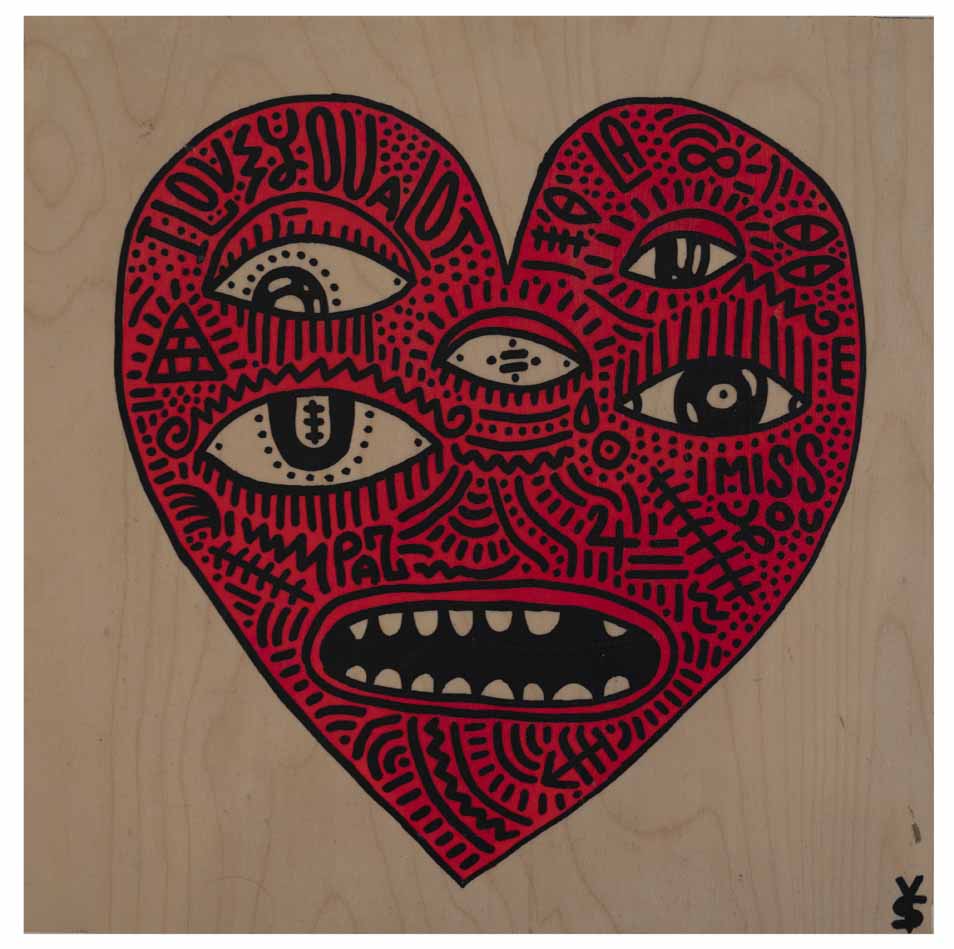 Although they sometimes appear jagged, nothing of the artist’s works work suggests he is being whimsical. On the contrary, they are indeed quite precise and exact, particularly in their juxtaposition of dark content depicted in vibrant color. Furthermore, as Kushner himself explains his illustrations have representations of “God and Jesus talking in everyone, but God has a blow up doll appearance; because everyone has a guy with a beard image and I think that’s funny so I am poking fun at that. My belief is that God is an energy force that has no being or image; it is everything.” 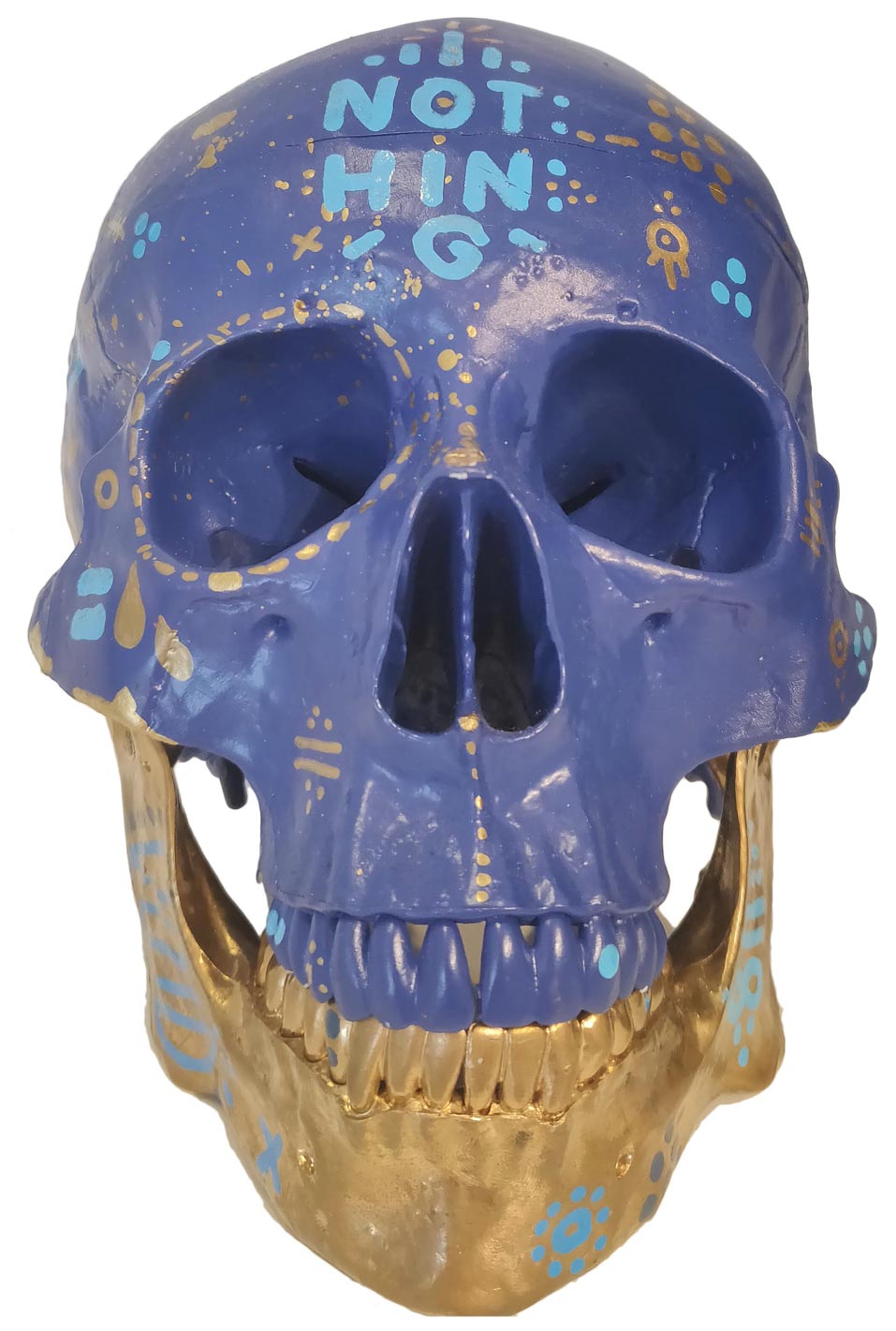 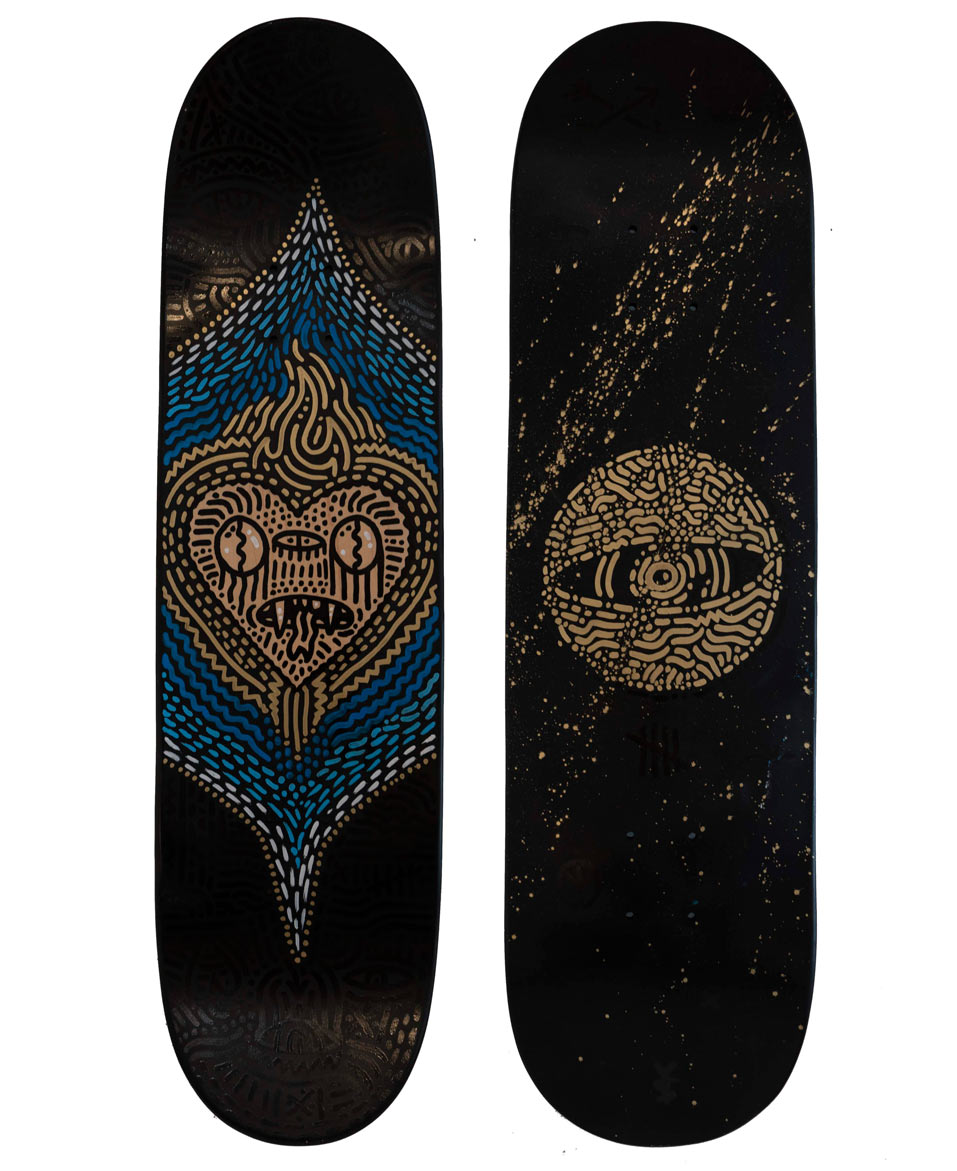 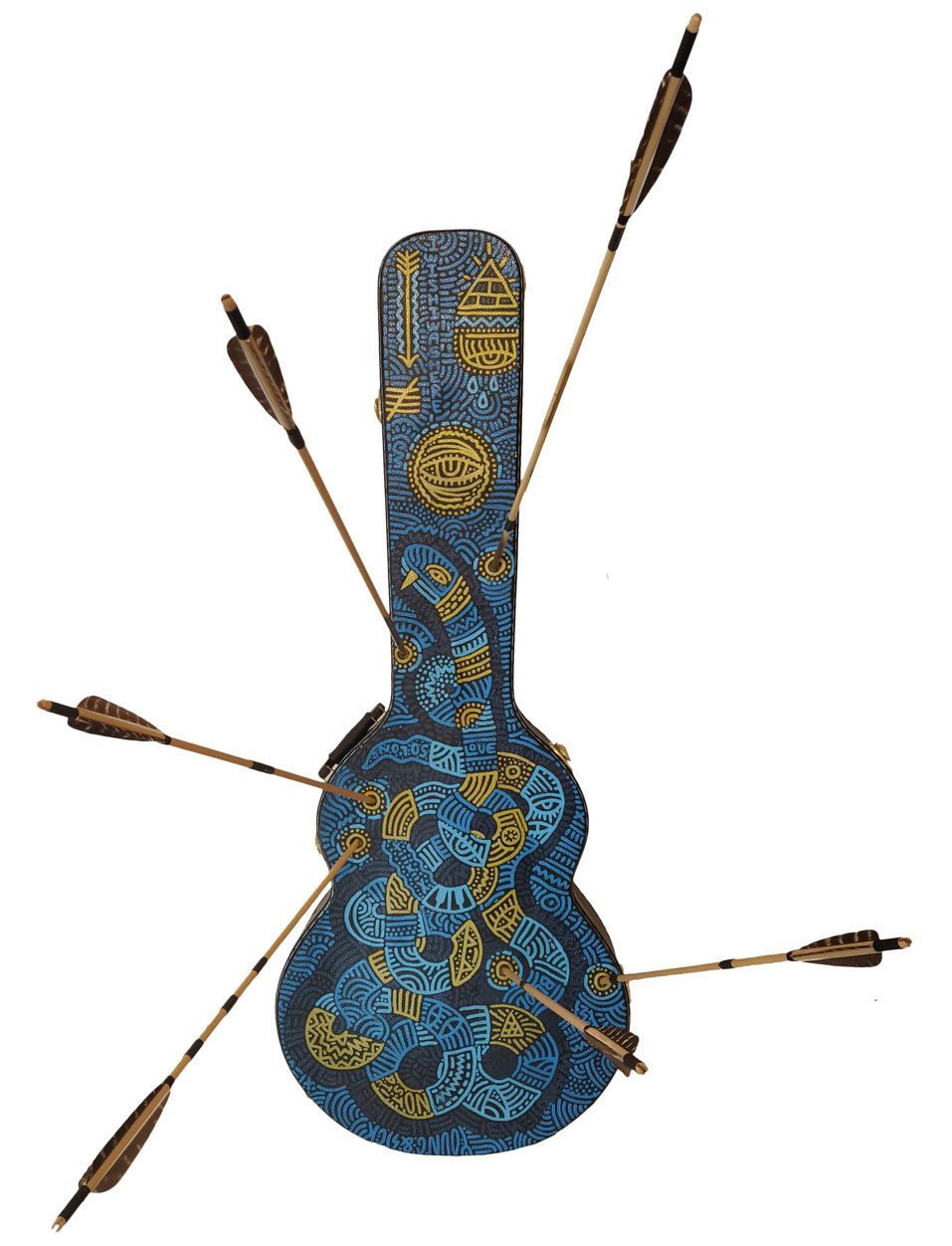